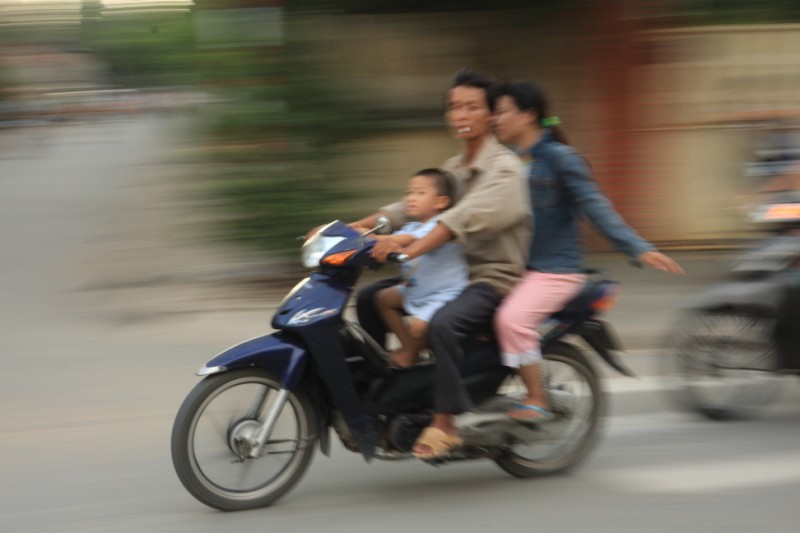 The power of the hand…

I hopped on my motorbike tonight at 8:30 PM to find out that my headlight no longer worked. It would only work when I throttled the bike up â but after I slowed down, the light went out. This created an interesting strobe effect as I drove. So much for not trying to call attention to myself as a foreign driver! I shouldnât be too surprised about the flukiness of the bike as the speedometer has never worked before, and I am convinced that that shocks are thee just for show.

Surprisingly one of the things that does work on my bike are the turn signals. However the locals donât even use the signals on their bike. They opt instead to use their hand. Iâm not talking about the âofficialâ hand turn signals that we use in the US; no, that would be way too organized! Instead they simply stick their hand out low and at an angle and normally wave it a bit as if they are âshooingâ off a fly.

Shortly after moving here, I was riding through a traffic circle the first time I saw this and had no idea what it meant. Little did I know that it was the universal sign for merging in Vietnam! Now as a motorbike driver I find that I naturally yield to the hand wave signal.

I havenât quite figured out how to do the hand wave signal myself though. Granted, I know shaking your hand isnât rocket science; it works pretty easily when you have a left hand turn as you right hand is always on the throttle. You can easily take your left hand off, do the hand shaking thing and turn. However I havenât mastered this at all with the right hand â in fact, I have no idea how you would accomplish this! 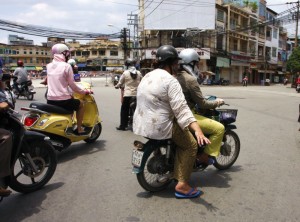 Move over - I'm coming thru!

The hand turn signal clearly works best when there are two people on the motorbike. The driver doesnât have to worry about signaling any turns, they just turn and leave the hand signaling to the passenger.Â  It’sÂ the true definition of a back seat driver! After living here for about 2 months and riding on the back of a motorbike taxi as my main form of transportation (before I became a master motorbike driver myself!), I often found myself doing the hand signals for the driver. Itâs one of those things that initially you look at and think âWhat the hell are they doing?!â Then all of a sudden you find yourself adopting the action while sitting on the back of a bike wildly shaking your hand as you merge through a traffic circle in front of a bus. How does this happen?! Itâs the same feeling I have when I am wearing a coat when itâs 88 degrees out; wonder how this foreign, crazy culture has crept into you.

I think the hand wave signal has itâs origins in pedestrian crossingÂ here. When the traffic is particularly heavy and pedestrians cross the street, they tend to put up their hand and wave it so that youâll somehow miraculously see them among the mass of motorbikes speeding along. âHey, hey â look at me, Iâm crossing the street!â

I guess the hand wave signals are just a way to call attention to yourself â and when you drive among 5 million motorbikes, trust me, you need to get their attention somehow!