Yes, you have all heard about the movie Motorcycle Diaries; Che Guevara and his epic motorcycle journey through South America. No, the title of this post wasn’t a typo. I’ve decided that since conquering my fear of driving in Ho Chi Minh City seems to be something I think about 24/7, I might as well write about it.Â Â  The Motorbike Diaries will chronical my epic journey to becoming a part of Vietnamese culture and driving among them….the locals that is.

For the past 5 months I’ve been getting around HCMC via a Xe-Om (pronounced Say Ohm). In English we would simply call it a motorbike taxi. However I’ve heard that the actual English translation means ‘motorbike hug’ and I adore that description. There’s something about it that makes me smile. It’s true though, when riding on back of a motorbike you do become quite ‘friendly’ with the driver. Imagine if you were in NYC and instead of getting into the back of a taxi, you go sit on the taxi drivers lap! It’s cozy. 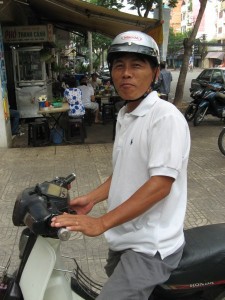 One of my favorite xe-om drivers!

Over the past 5 months I’ve chosenÂ a few regular Xe-Om drivers. Kind of like a personal driver I suppose, but it’s not quite that elegant.Â  Basically you just hope that they know and respect you well enough that they don’t show up drunk.Â  One of my drivers even took me out and tried to teach me how to drive his motorbike with him on the back. I kept wondering if he understood if he was working his way out of a job if he taught me how to ride myself?! Most of my regular guys are good – but they are like any other taxi drivers around the world. They are always in a hurry and think that they are Steve McQueen racing through the streets of San Francisco…a bit terrifying at times.

Keep following along to see what happens…even I don’t know how this adventure will end! As a side note – at least I do have medical insurance!

Liked what you read, then keep reading!