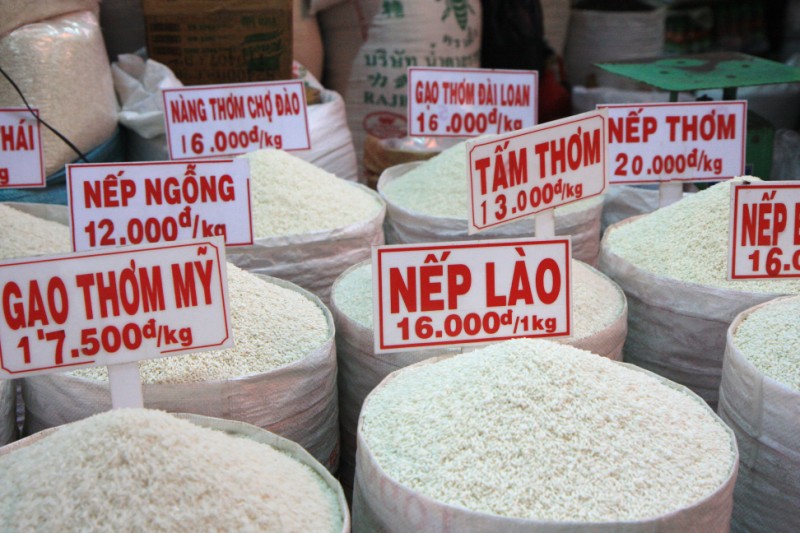 No Rice for You!

I started my morning screaming at people today. Granted Iâm not a morning person, thatâs no secret, but I donât normally scream at people. Sure, I think it â but it seldom comes out. 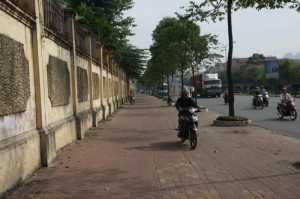 âGet off the fâing sidewalk!!â I believe is what escaped my lips with some really pissed-off arm gestures accompanying the words. This performance was directed at the 15 motorbikes barreling down the sidewalk towards me swerving as they were surprised to find someone actually WALKING, let along RUNNING, on the sidewalk. The traffic was so packed that everyone just thinks the sidewalks are meant as an overflow âlaneâ for the congested streets. Absolutely nothing is sacred in this place.

This is just one of the many frustrations I experience daily. However, lately Iâve been trying to overcome another frustration; discrimination.

I try my best to do the impossible here in HCMC, go running outdoors. If any of you have been here, then you may know what a insane activity this is. I would be much safer skydiving or motorcycle jumping 10 beat up carsâ¦while engulfed in flames. However Iâm a runner, and I wonât give up that persona without a fight. Since moving to Asia, Iâve given up the persona of âcorporate executiveâ, âfashionableâ, âsex in the city characterâ, and âgood party hostâ; but I wonât give up ârunnerâ. No matter how hot and sticky it gets, no matter how bad the pollution is, no matter how dangerous the sidewalks are; I have to keep running, even if it is only 3 miles 3 times a week.

I go to the zoo to run in the mornings as long as itâs before 8AM. After 8AM furgetaboutit, too hot. I go to the zoo because it is the only place I can run where itâs safe outdoors. There are no cars or motorbikes, and there are actual trees offering a bit of relief from the scorching sun. The only problem is that itâs small â really small â so I have to run the same boring loop every 7 minutes. Describing it as âboringâ may be a little rough, after all I do get to see elephants, zebras, giraffes, ostriches, lions, and buffalo (the Asian kind) every loop. 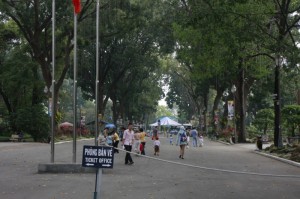 Some of the only trees in HCMC!

When I first found the zoo, I was excited because I learned that if you arrived before 7AM when they open, you could simply go in and exercise. There were tons of local Vietnamese people playing badminton, doing Tai Chi, stretching, doing arm circles, and walking in the park. It was full of life! However as I entered the park surrounded by the Vietnamese people pouring in the front gate, I was stopped.

âWhat Mr. Officer? What did I do wrong? Iâm just going running.â

They refused to let me in without a ticket. After much argument that went nowhere besides the guy still saying to me âhave ticket!â I finally decided â fine, I will buy the damn ticket. I walk back out parting the sea of locals walking into the park and I go to the ticket booth. 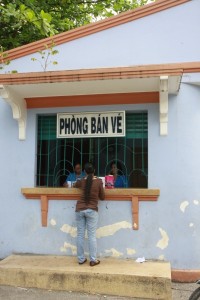 Ticket Booth...the ladies there know me by name now.

Itâs impossible for me to buy a ticket because they donât open until 7AM. I go back to the guard. He once again says âhave ticket!â, I try to say to him âticket no open!â This goes nowhereâ¦I leave in a giant huff and go risk my life running on the sidewalks around the motorbikes and people eating soup (breakfast) on the sidewalk.

As I ran that morning, I was furious. I started to wonder why I was so mad about the episode. Honestly it shouldnât be surprising that I was being discriminated against. After all, the market charges me 15,000 dong for a mango, while I watch the local ladies pay 10,000 Dong. This is a fact of life in Asia. People see your skin and immediately rip you off.

Motorbike taxis look at me and start at 40,000 dong for a ride to work. I look at them in disgust and say slowly in hopes they will understand me âI live here.â Pause for an effect and then say âI pay 15,000 Dongâ. They look at me, see Iâm very serious and then give me a ride to work for 15,000 Dong. The locals pay about 5000 Dong for motorbike taxis for the same distance. Thereâs a tourist price, a white price, and a local price. It never fails â I always have to go through the tourist price first, then I have to be ok with the white price.

Now â back to why is this so infuriating to me? Some days I can brush it off, but many days the blatancy of the discrimination eats through my soul like acid through metal. I have come to realize that thisÂ action of discrimination is really a major cultural divide among Americans and the Eastern world. I think (hope) that most Americans believe in equal rights. Not just believe, but itâs deeply woven into our psyche and culture. This is what my generation and generations before have spent their lives fighting for. Equality is core value for us. Since I was born in 1970, most of the civil rights movement had worked itself out by then, so the concept of equality was a foundation in which other values were built for me.

Having to accept discrimination is a chore every day. But I do accept it. I am a visitor in this country and I have to remember that. I have to take off my American âhatâ and just try to accept. (Iâm gritting my teeth as I write this!). So now I go running at the zoo at 7AM and pay my 8000 Dong (50 cents) to get in to the empty zoo and run multiple loops melting in sweat as if I were the Wicked Witch of the West.

Sometimes I do try to outsmart the system and send a Vietnamese friend out to do the market shopping. She pays at least half of what I would have to pay for the exact same stuff. I give her a bit of a tip, and we all win. Ahâ¦the little victories.

Now if I could just get the people to not drive on the sidewalks! 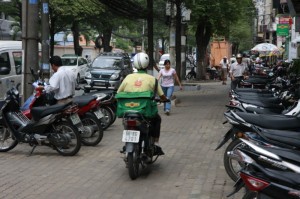