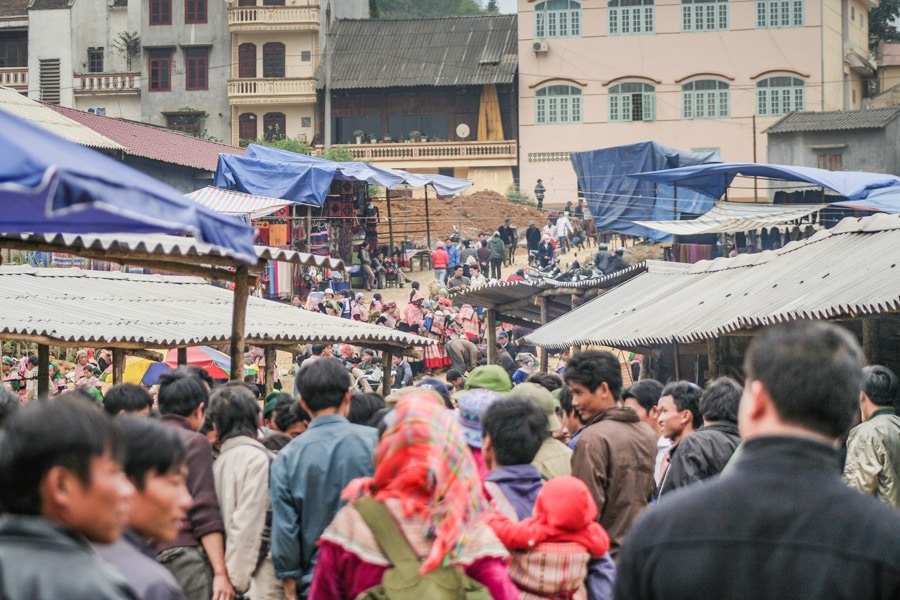 I visited Bac Ha Market in 2007 and at that time it was quite unknown.  Be aware that you’ll still find all of the things I refer to in this article – but you will also find many more tourists 10 years later.  However, that shouldn’t stop you from going to this unique colorful market!

I’ve seen my share of markets during my travels – I feel like I”m pretty seasoned when it comes to seeing every imaginable type of veggie or fruit, smelling every foul odor that comes along with the fish markets, and I’ve been exposed to cuts of meat and parts of animals that will shred your stomach. Every market still seems to have a surprise to it – and that’s what draws me in.

The Adventure is Getting There

The Bac Ha market in northern Vietnam is tucked away high in the hills and it’s full of local flavor. In fact, this was one of my favorite markets I’ve visited in my travels. First off – it was an adventure to get there; it is about a 3 hour drive from Sapa. Three hours after we left Sapa behind and drove through miles of rices paddies we started climbing our way up to Bac Ha.

The last hour involved driving on a narrow, bumpy, curvy road on the side of a mountain. The kind where the driver simply lays on the horn when you are maneuvering around the many hair-pin turns. This warns any oncoming traffic that you are comin’ through! When you do meet another car, you slow down and drive on the ‘shoulder’ (basically any dirt you can find to drive on) precariously perched on the edge. These are the times when you make peace with your life…just in case. 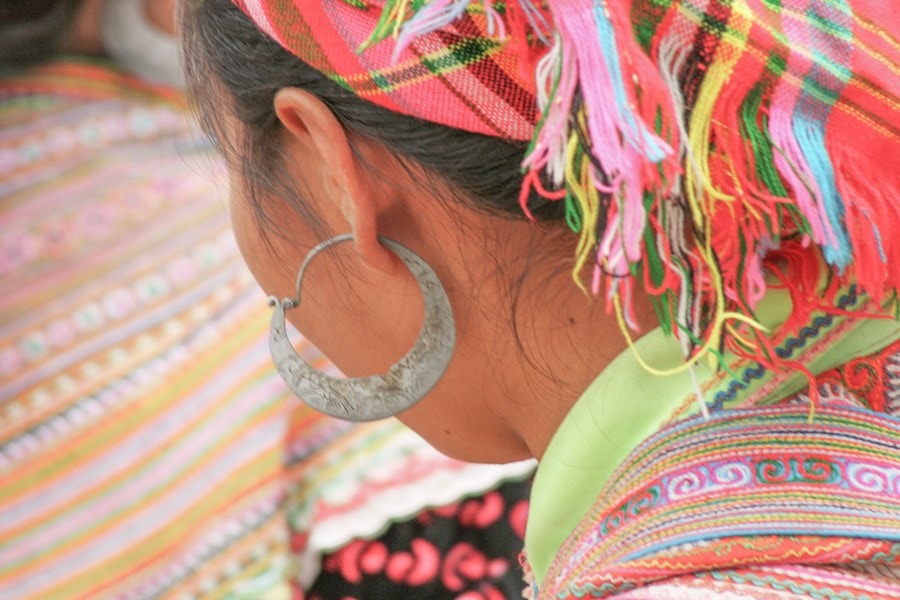 Colorful textiles are found all over the market

What Makes Bac Ha Market a Great Place to Visit

The two reasons why I loved Bac Ha market so much was that it was filled with locals – mainly hill tribe people in colorful textiles. It was like a giant rainbow of colors as you looked out over the crowd.  All of the locals bustled around buying their food, farming supplies, tobacco, moonshine, pots, and they would even stop to get their hair cut at one of the many market barbers. This wasn’t just a market – it was a lifeline for everything and everyone. The market is only on Sundays – so this was also their time to simply socialize. The whole thing reminded me of a WalMart in a small town…it had a bit of everything.

What Products Will You Find at Bac Ha?

I first watched the iron guys pound out new farming implements – hoes, shovels and machetes. Next to them were the smokers. Piles of tobacco were laid out on a sheet on the ground. A bunch of long bamboo pipes were next to the mounds. Men would come by, squat down, have a few puffs from the pipe, pay and leave happy. It was like a tobacco bar of sorts. I walked around the veggie and fruit part of the market and watched young girls carve up pineapple as if it were origami! One item I hadn’t seen for a while in the markets was sugar cane. Many people would walk around gnawing on their stalk of sugar cane…pure sugar! No wonder why many of them were in need of some dental work!

I next moved on to the barbers. I stood there for about 20 minutes watching the makeshift barber shop work on customers. Basically it was just a metal chair out in the open with a mirror (normally cracked) propped up on a pile of dirt or something. This set up also involved numerous extension cords! One of the barbers was trying to convince me to get my hair cut! Even though I’m sure it wasn’t more than $2 – I decided to pass!

Be Daring and Have Some Lunch 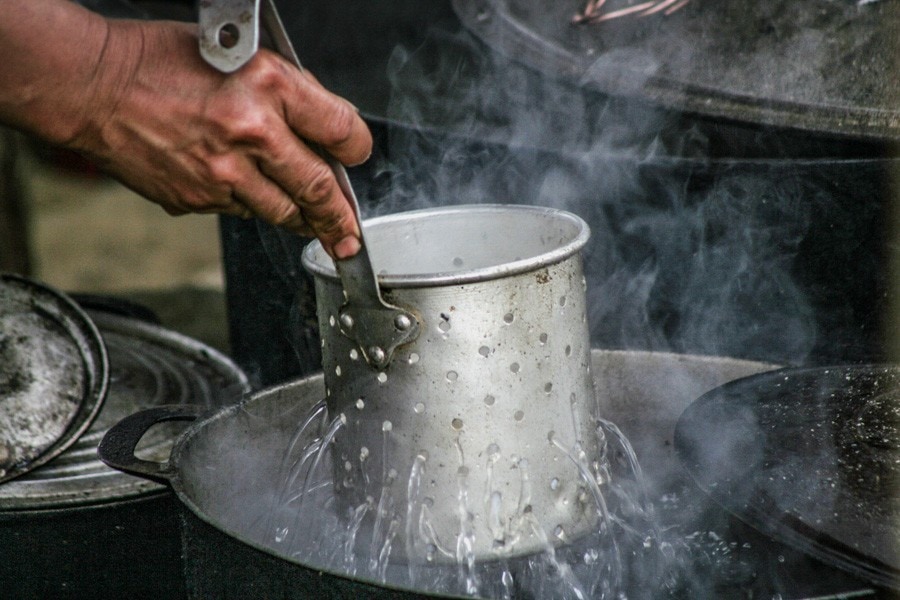 I wandered off to the food stalls and was mesmerized by watching them make the famous Vietnamese soups. A few noodles and meat boiled in a broth, add some herbs and a pinch of spice to it and you’ve got a meal in about 2 minutes. I watched the locals slurp down bowls after bowls – all with chopsticks.

One of the local soup vendors caught me watching and motioned for me to come over to his stall and try some. I decided to bite. I went closer and examined what he was making. There were a couple of platters of meat sitting out – one was some kind of intestine, the other was some kind of white meat. I watched him make up soup with the intestine for someone else. I was quickly analyzing my hunger in accordance with my risk taking desire. I was making a list of all of the various sicknesses and bacteria I could ingest by eating at the local soup stall and I decided that I felt like a rebel today.

I took a seat and pointed at the white meat and he started preparing! I honestly have no idea what some of the spices were that he threw in it – but I proceeded with excitement to be eating with the locals! He gave me a couple of chopsticks from what looked like a dirty pile and I decided to put them in my soup first in hopes that the hot water would kill whatever bacteria was on them. I dug in – it was wonderful of course! The guy was happy to see that I liked it so he poured me a small glass of rice wine to have with my soup (I guess I passed the ‘test’). The rice wine pretty much tasted like jet fuel. However – I also figured that the jet fuel would certainly kill off any potential bacteria – so I enjoyed every drop of it! 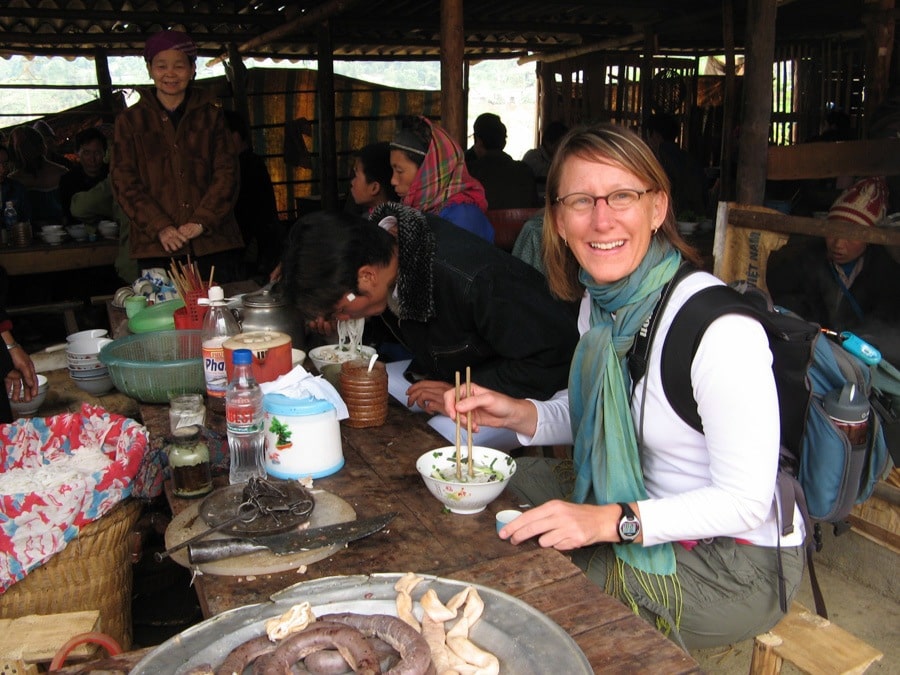 Eating with the locals

After my lunch I continued exploring. I saw the area where all of the women sold the moonshine. They had big plastic bottles of the stuff and would funnel it into small old water bottles. You could smell the grain alcohol from quite a distance. 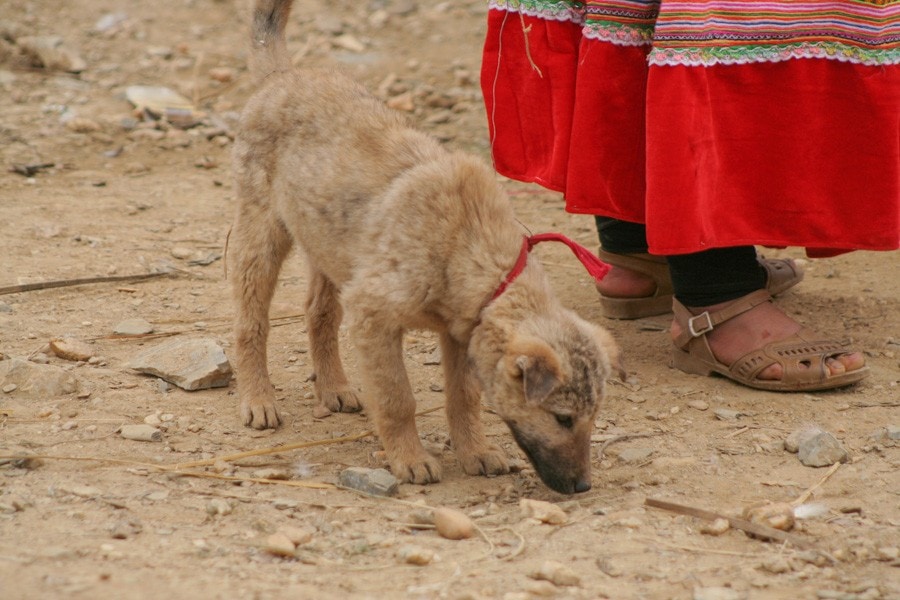 Pet or food? Not sure…

Finally I worked my way back to the pig and dog market. Yes – in Vietnam they eat dog – as they do in many other countries. It was strange – it was just a bunch of people standing around with their dogs and pigs – waiting for someone to come up and inspect them and hopefully buy them. Our guide did tell us that not all of the dogs were used for food – some were being sold as pets. I’m not sure if he just told us that to make us feel better or not. He went on to say that the more ‘western’ looking dogs were used as pets and sold for about $10. The other dogs were used as food – and sold for about $3. 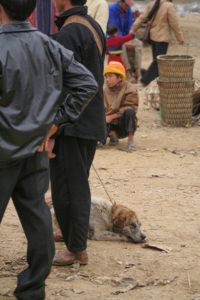 This one looks pretty sad…

You are probably wondering what a ‘western’ dog looks like…apparently a ‘western’ dog has longer legs and ears…kind of like a super model I guess. If you were the unlucky dog with short legs – well – you might very well be dinner soon.

I stood there and watched the dogs and people for a long time. I thought about how different cultures can be. For some reason seeing the dogs with the rope around the neck as a ‘leash’ was rather depressing to me. Their heads were hung low as if they knew why they were there. However I felt nothing for the squealing pigs that were also being sold (I never knew that pigs could squeal THAT loud – it was deafening).

I came to the conclusion that all cultures are different and what’s abnormal to me is normal to someone else. It wasn’t easy to take all of this in – but it was educational.

I finished my day with a treat…a Diet Coke and a leaf pancake (sounds gross – but they were really good). This was definitely a cultural day – I was exposed to many new things (some great, and some that made my stomach turn) and I tried new things – and that’s what makes traveling so damn fun!

Only runs on Sundays and over the years it has become very popular with the tourists (a very different situation than when I visited 10 years ago!). Stay in Bac Ha and go to the market as early as you can before the tourist buses show up.

If you need to do a tour from Sapa here is one from Viator.  I haven’t done them, but I have used some of these companies before.

2 Responses to "The Colorful Market in Bac Ha Vietnam"