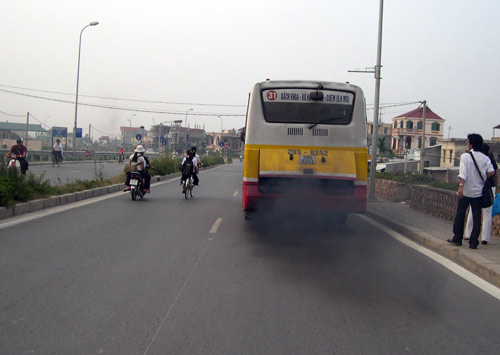 I often wonder how many months the pollution and dust in Saigon will take off my life.Â  For this reason, I can’t imagine living here long term.Â  Hell, I imagine that living here long term is akin to smoking a pack of cigarettes a day!Â That may be an exageration, however no one really knows what a toll this environment is taking on people’s lungs and life span.Â 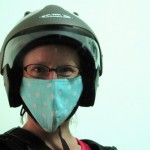 As you have seen, I have a little mask that I picked up from a local street shop here.Â  In reality, it doesn’t do much to keep cargcinogins from getting into my lungs, which may be why I have developed a ‘smoker’s cough’.Â  However, it does help me fit in when I’m driving and people don’t stare quite as much.Â  Last week though I decided to invest in my health a bit moreÂ by purchasing a proper pollution mask.Â 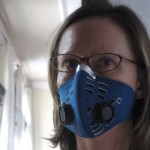 I found it in a grocery store and the box said – “Pollution Mask” – followed by a bunch of Vietnamese.Â  It was enough to catch my eye.Â  It has a carbon filter and valves so that it has a tight fit against your mouth ensuring that the air you breath in is going through the filter.Â  Granted – I look like Darth Vader, and probably sound like him when I actually have to speak through the mask!Â  This kind of negates my quest to blend in, but I figure it’s all in the name of health!

One thing that amazes me here is the local’s tolerance to these harsh conditions.Â  You’ve seen my commute to work after it has rained and the road is like driving over a giant waffle!Â  However, when it doesn’t rain then it means that the little, heavily traveled dirt road is a giant Grapes of Wrath dust bowl!Â Â

I stare out the window in amazement as the locals drive behind these dusty trucks inhaling the dust and pollution without much of a care.Â  In this vido the guy was so calm about the poor and dangerous driving conditions that he was chatting on his cell phone.

Just last week there was a fatal truck/motorbike accident on this road. I was coming home from work and was stopped by the mass of people that were trying to rush to see what happened. The accident was tragic, yet not surprising. Traffic was stopped for hours as the police tried to make their way out to the countryside to investigate. I ended up walking by foot for a while with my students until I could get another taxi. I was able to get a close up look at the family’s dusty lives and homes along this trecherous road.

My ‘Pollution Mask’ costs me 85,000 dong (roughly $5 USD). It’s not expensive, but certainly not cheap in local standards. However I often find myself staring out my car window in disbelief that more people don’t have proper masks – or masks at all for that matter. In fact, many times I see couples on a motorbike where the woman is on the back with a mask and the husband is driving with no mask. She consideratly places her hand on his face and cups it around his mouth as they drive down the dusty highway. Even though proper masks are seemingly cheap, I know that the answers as to why more people don’t have them are complicated. I only wish I could get one for everyone, but that of course doesn’t guarantee they would wear them.

The children’s helmet laws went into effect this month. I have seen a slight improvment in kids wearing helmets; however, the fact is that 50% of them still don’t wear anything. Something I will never understand.

This country will continue to baffle and confuse me, but it’s why I moved here to see a different way of life. Hopefully it won’t shave too many years off my life!

17 Responses to "The Dust Bowl"