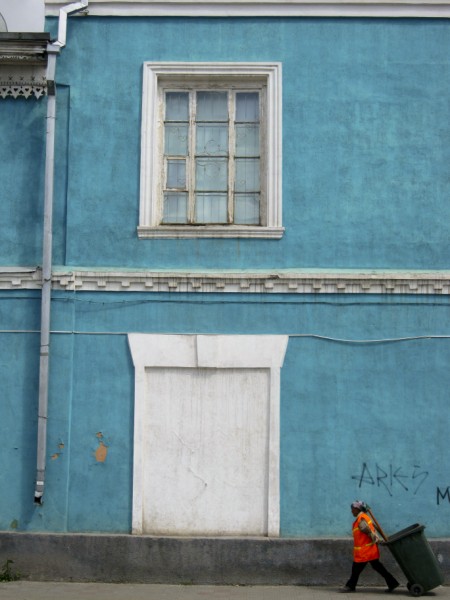 After arriving a day late to Ulanbatar, I had a lot of ground to make up. I arrived with no plans except for a guest room booked for one night. My plan was to make no plans and to figure it out when I arrived. In addition, I had another goal, I really wanted to travel with other people. Granted â I love solo travel, but for the last few big trips I have been solo and I find that being completely solo, in remote places, where no one speaks English is really challenging (see my Nepal posts). Sure, I proved I could do it in Nepal and in the Philippines, but I would have loved to have a little company to share the experience with. So in addition to making some itinerary plans, I also had to meet some strangers and convince them to let me go with them! Itâs like dating all over againâ¦ugh!

I had been conversing via email with a number of guest houses that said they may be able to help place me with some other traveling companions. Some guest houses were willing to work with me more than others. Idre and Golden Gobi Guest Houses went out of their way to try to find a solution for me by having me join another group already in progress. On the other hand Khongor Guest House didnât even attempt to help me â and I was staying at their hostel! Idre and Golden Gobi came up with a few options, but nothing really felt right to me. I travel by intuition and feeling. When the right idea comes to me, I will know it. In the meantime I was spending a lot of time going between guest houses and getting frustrated with nothing feeling right. 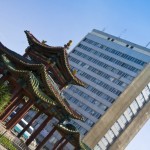 Some countries are easier to travel through solo than others. On a scale of 1 (worst) to 10 (best), Mongolia seemed like a 3 to me at this point. I spent a whole day going from guest house to guest house trying to figure out if there was a group I could join up with, going to the same areas that I wanted to go to and working within my timeframes. I felt as if I should be wearing a signboard, standing out on Peace Avenue (aka Tourist Main street in Ulanbatar) reading âSingle traveler, someone please travel with me. I want to go to the Gobi from July 20 â Aug. 1. Seasoned traveler, doesnât snore, and will share my tent and packet of gum.â Or a higher tech alternative to the signboard idea was to simply get Ulanbatar guesthouses merged onto an onramp of the web; make a little Facebook page for them serving as an online message board for single travelers looking for people to travel with in Ulanbatar. I had it all designed out in my head as I imagined how much easier it would make this inefficient process. Anyone from Mongolia reading thisâ¦look into Facebookâ¦itâs a super idea you can steal from me. 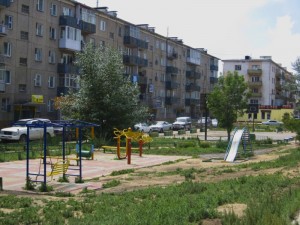 As I wandered trying to find a solution, a solution actually came to me. I was frustrated about not making any progress so had sat down in a park outside of the Golden Gobi Guesthouse. I use the word park lightly as the parks were run down, sad little places that looked like a scene from the cold war. A Canadian couple who I had seen earlier in the day at the guesthouse came outside and introduced themselves. They said that they were in the âloungeâ when they heard me talking to the tour rep and overheard what I was looking to do. They saw me outside and came to me to recommend a travel company they felt would yield all of the cultural experiences I was looking for in my Mongolia travels. They had just returned form a trip in the Gobi with a Eco Tourism company called Ger to Ger. I had actually researched Ger to Ger before and was impressed and intrigued with their cultural immersion travel. As we sat in the pathetic little park talking about their experiences, their kindness overwhelmed me. I suggested we go discuss over a beer and we happily spent the rest of the night together drinking beer and eating pizza sharing travel stories. See â these are things that donât happen when you travel with others; these encounters happen when you are solo â and this is one of the reasons I like to travel solo â you meet wonderful people! They sold me on the Ger to Ger concept; it seemed absolutely perfect for the type of travel I wanted to do. I planned to go to the office the next day to choose an itinerary. 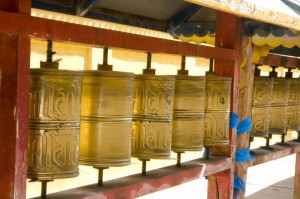 I sorted the Ger to Ger plans out the next day, but I still had one big problem. I had to work at finding some travel partners to come with me! I was prepared to go alone, but really didnât want to. I had a day to try to find some other travelers that I thought I could get along with and convince to go with me. Considering my eternal single status and my inability to even get a date in the last 3 years â my odds werenât in my favor. However the travel Gods shined down upon me the next morning and my potential companions showed up at my doorstepâ¦errrrâ¦my hostel kitchen. As I was getting my tea and having the meager piece of dry bread that Khonger called âbreakfastâ, I met two female, thirty-something English teachers who had just arrived off the train from Russia and were looking to make travel plans. They lived in Vienna and had been traveling on the Trans Siberian Express. I used all of my salesman techniques and told them about Ger to Ger; they were interested! A threesome was born! My trip was finally getting off the ground! Itâs amazing how well things actually worked out considering my lack of direction the first day.

We had to wait another day in Ulanbatar before we left for the desert so I spent the time touring around Ulanbatar and dodging hailâ¦yes, hail.

While I was there Ulanbatar actually had some deadly flooding. As the hail came down and the streets started flooding, all I could do was stand under an awning with the locals and watch the wrath of mother nature. After spending 4 days there, I canât say that Ulanbatar is a great city, instead it had a cold demeanor about it. Parks were sparse and looked like they were abandoned, the buildings crumbling down or in desperate need of paint, and dark stairways led to sad little guesthouses. To top it off, it had to be one of the worst cities Iâve ever been to when it comes to petty theft. In the main tourist area on Peace Avenue there was no peace; there were only pickpockets. I never once felt safe or at ease walking around the streets there. 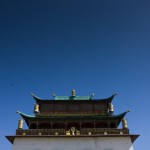 I tried out all of the coffee shops and pizza joints that I could find knowing that once I left for the desert coffee and food without mutton would be a rarity. I also walked to the monastery and wandered around the grounds there with my camera. The monastery was nice, but I found the ger neighborhood leading up to it even more interesting. Dirt âstreetsâ and fenced in gers gave it a very eerie, closed-off feeling. I found it unusual that every living area was fenced in; providing a territorial feeling in such a vast, open country.

Clearly the best thing about Ulanbatar was leaving it with a travel plan and new travel mates! Gobi or Bust!

12 Responses to "In Search ofâ¦A Plan"