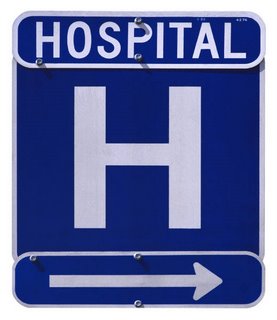 There's no Dr. McDreamy in Vietnam

I had been putting it off for as long as I could, but finally after 6 months I had to go visit the hospital. No, I wasnât in an accident nor was I sick. I was required to have a physical in order to obtain a work permit in Vietnam. This wasnât like when I was in grade school where you make an appointment with your doctor and you simply brought in a note from her/him saying you had passed a physical. No, that would be way too simple and democratic. Remember, I live in a socialist country now; I had to go to the government hospital to have my âphysicalâ.

I was a bit annoyed and excited by this. Annoyed because I knew it would be a long, drawn out process with a bunch of needless steps. Excited because I was going to see the inner workings of the largest hospital in HCMC that serves locals. No doubt, this would be a cultural adventure!

Luckily the school where I worked is sponsoring my work permit and as part of that they make sure that I have a Vietnamese speaker accompany me to the physical. This is very important because I have no idea how I would have navigated the maze of events, doctors, floors, and people on my own. Especially when I was preoccupied; looking around in amazement as if I had just entered the lost world, expecting a doctor to come riding in on a dinosaur.

In addition to the Vietnamese assistant, I was accompanied by another ESL teacher who also had to go through this maze of medicine. At least I had someone to share my reactions and observations with as they occurred else I may have burst! As we stepped out of the cab we were hit by the thick, tropical air and a typically chaotic parking lot; motorbikes, bicycles, cars, buses, ambulances and cyclos going in every direction with people weaving in and out of the narrow seams of space. 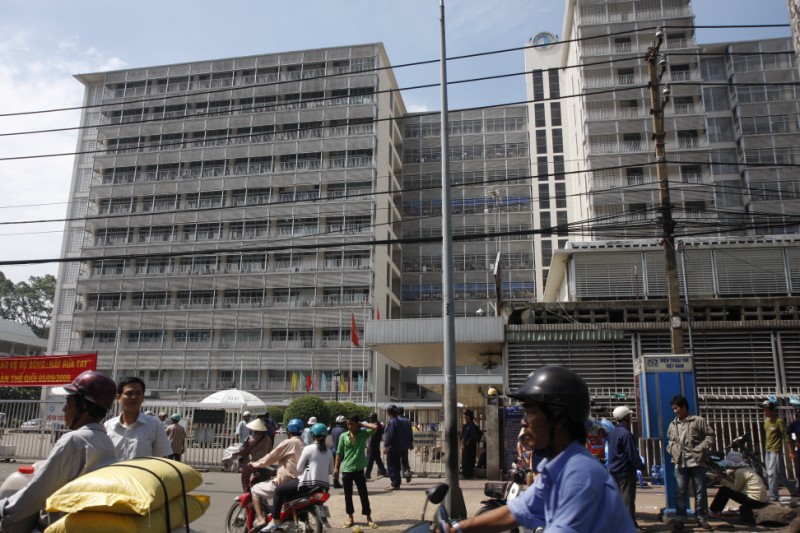 The Government Run Hospital in HCMC

Since I’ve been living in HCMC I’ve never actually seen two important things – a hospital or a fire station. Needless to say, I was happy to find out they had a hospital! It was a large white sprawling building. It had some random fans on the walls to try to move the sticky air around, but there was no air conditioning to be found, not even in the doctorâs offices. Due to the lack of cooled air, the building had a very âopen airâ design; there werenât many windows, but just open spaces and corridors instead so that the air could circulate through the whole building; a typical architecture in balmy countries.

We followed our âguideâ into the hospital and sat in a little waiting area. It was clean and had many fans going full blast trying to circulate the air. I looked around and saw various other foreigners in the waiting room looking as if they had been there a while âhaggard. God I hate hospitals, no matter where they are. There was also a splash of Vietnamese people, but it appeared that there were more foreigners than locals which I thought was strange. 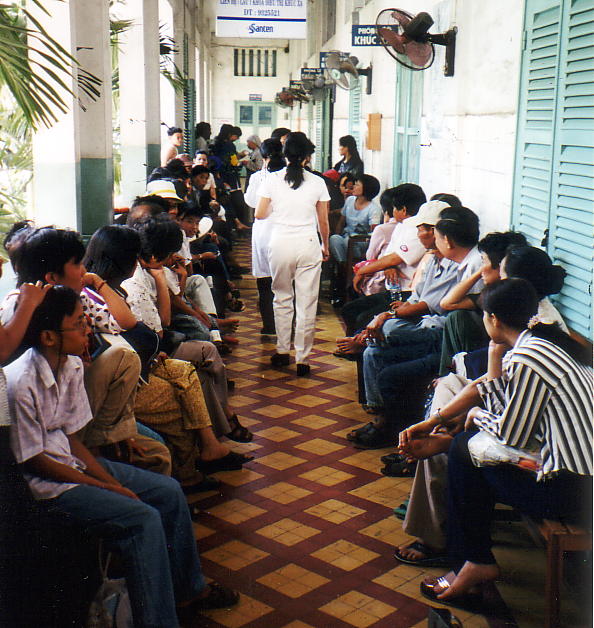 Not my photo. I wasn't allowed to take pictures inside. But this is exactly what it looked like!

The next two hours were spent following our assistant around the huge building as if we were chicks following our mother blindly. We left the âcheck-inâ area and went off to another part of the hospital. As soon as we departed the check in area the whole environment seemed to change. Gone was the whir of the numerous fans moving the air around, and gone were the chairs and somewhat orderly waiting area with natural light. Now we entered areas of wide hallways where people lined up on every square inch of wall. Some were standing, some were doing the Asian âcrouchâ, and some were lying on the floor sleeping. There were people everywhere and I sort of felt as if I was in an area that I shouldnât be, yet everyone was here looking miserable together.

I asked our assistant why the two areas were so different. She explained that the initial area we were in was for special âcustomersâ. I tried to dig more into what âspecial customersâ meant and learned that some people/organizations pay special fees to have more prompt (and clean I guess) treatment at the hospitals. In addition they could see English speaking doctors and didnât have to wait in what looked to be horrendously long lines. It was kind of a Business Class program in a way. Apparently our school was flying Business Class; for this I was thankful.

The first stop was a long hallway on the second floor where we were to get our chest x-rays done. The hallway was packed with people and the moment you stepped into it you felt its heaviness. The expressions on peopleâs faces, the exhaustion in their body, and their worry and pain â you could feel it all. There wasnât a spare piece of wall to lean on as the hallway was at capacity. We tried to get out of the way of the moving traffic/gurneys and wheelchairs. As I took the whole scene of bleakness in I noticed that above all of the doors in this hallway there was a little sign that said âOperatingâ. There was a lightbulb inside it and it would light up the sign from the inside. It dawned on me that these doors lead to actual operating rooms, and not a surgery wing. That was shocking to me. Here all of these people were standing in a hallway while surgery was going on behind the door. I guess I was simply surprised by the mass of people just a door away from the âactionâ.

Soon they called me in to do the x-ray. The room looked like I had walked back into 1950. It was in bad need of paint, and the exposed fluorescent lightbulb added to the dreariness of it. There was a huge contraption/machine that looked like it took up half of the room. They gave me a gown, and made me change out of my clothes, stood me in front of the big, ancient machine and took the x-ray and shuffled me off back to my âassistantâ. 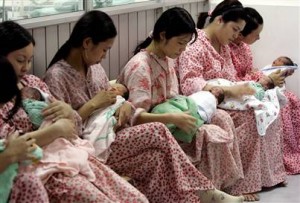 Not my photo - but a cute one regardless!

She led us through another floor towards the ear doctor. As we were navigating through the maze a gurney came by us with a number of people following it. I looked at the scene and saw the body on the gurney was completely covered in a sheet and clearly had just passed away. The family followed somberly and I felt as if time had stopped for a moment as I took in the scene that was 1 foot away from me. I wasnât really prepared for that. It appears as if there was little privacy in this hospital, then again thereâs little privacy in Vietnam in general so I guess it shouldnât surprise me. Life is lived out in the open in Vietnam; often families eat their meals out on the sidewalks, and they sit and socialize outside their homes. Apparently lifeâs also ended in the open too; it was being wheeled through the center of the hospital. Yes, I know I was in a hospital, but I wasnât expecting to see that â maybe I was naive, unprepared, tired, but it certainly shook me.

The ear doctor was uneventful as he literally talked my ear off as it was his chance to use English. I donât even think he looked at my ears. He just asked me questions about America. Next stop the eye doctor where they took my glasses from me and asked me to read. Even I knew that wouldnât work. They kept trying different lenses without ever really getting it clear enough for me to read and eventually gave up and sent me on my way; I wondered if they put down that I was blind! I didnât see a piece of modern equipment in any of the rooms I was in. I can only assume that it was located somewhere else; I hoped.

Finally we went back down to the âspecialâ entrance where we had entered about 75 minutes ago. All of the same people were still there waiting. I guess their Business Class was more like Coach class. In this area we had blood drawn, blood pressure taken, someone listened to our heart, and finally we saw a doctor and had a consultation. The female doctor asked me if I had ever been to a hospital. I used my English teaching skills to determine that she wasnât asking me if I had ever been inside a hospital and instead took her question to mean âhad ever been admitted to a hospital.â
âNope.â
âHow do you feel?â
âI feel fine.â
âOk, thank you.â

Thatâs it â my hospital physical was over. As I walked back out into the craziness of the street scene with ambulances and motorbikes everywhere I couldnât help but feel as if I had just experienced some weird time warp. In addition to the feeling of time travel, I couldnât shake the feeling of sadness. I was deeply saddened that this was the best public hospital that HCMC had to offer its local residents.

10 Responses to "Greyâs Anatomy in Vietnam"