Renewing is easier than you think!

I decided to start the process of getting my passport renewed as many countries wonât let you enter if you donât have more than 6 months left on your passport validity. I certainly didnât want to be turned away at the border of Mongolia! Plus, Iâve learned that working through the American consulate while you are abroad for things like passport services, is actually much quicker than doing the same thing in the US. First, I checked the American Consulate Services website for Vietnam and gathered what they said I needed (form, 2 passport photos, $75, and old passport) and headed off to the US Consulate in District1.

The motorbike drive into town was as infuriating as ever. After I showered and tried to look somewhat put together, I hopped on the motorbike and took off. As soon as I started to go over the bridge the skies opened up and poured. I pulled over next to all of the locals along the side of the narrow 10 ft. wide motorbike lane and quickly tried to put on my poncho as other bikes and carts whizzed past me…so much for safety. What a process; take off the helmet, put on the poncho, put the helmet back on over the poncho hood, snap up the arms and try to make sure it covers my backpack; all the while itâs pouring rain on me. Finally, Iâm off again. Of course, once I got it all on and started again it had nearly stopped raining and I was already soaking wet. Worse, now I was on a bike, my poncho blowing in the wind as if I were a huge kite or that girl that ate too much blueberry gum at the Willy Wonka factory. 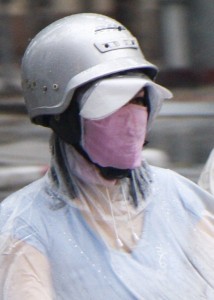 Realize that it's about 90 degrees out. Makes you sweat just looking at it!

There are many, many inconveniences about driving a motorbike, rain is just one of them. Helmet hair is another. Sweating like a pig wrapped in plastic poncho in 90 degree heat is another. Wearing a mask to avoid the pollution having beads of sweat form over your upper lip is another. Being stared at is another. Getting honked at constantly is another. Being squeezed out of the lane by cars is another. Shall I go on? I think I experienced all of these, so when I arrived at my destination, I was in a shit mood already.

Of course I knew that I had a 50/50 shot of actually having a successful trip to the American Consulate to get my passport renewed. After all, itâs still the US governmentâ¦placed inside Vietnam. Itâs kind of like dropping a shot of whiskey into a beer and guzzling it; the result could be volatile. As requested, I dropped every piece of electronics I had at the guardâs desk; laptop, phone, ipod, and camera. I went into to the fortress of the consulate building and made my way to the section for American citizens; the only area of the Consulate that is air conditioned. Thank God. I took special note of the new photos on the wall â Barack Obama and Hilary Clinton â this made me smile. I entered the air conditioned room and saw it was practically emptyâ¦quite odd for a government office, so I took a number and waited.

Of course the one other American in the office was screaming at the cashier about how it was completely idiotic that the US Embassy in Vietnam wouldnât accept Vietnamese Dong as a payment. Ahhhâ¦Americans, my home culture, we can get a bit fiesty! I wondered if this woman also got caught in the rain on her way hereâ¦lord knows that would put anyone in a bad mood! She couldnât convince the cashier to see it her way – no surprise there. I opened my purse and looked for my credit card- just to make sure that it was there and I could actually pay for my passport renewal and not have to go through a yelling match like the woman ahead of me! Whewâ¦it was there. Luckily a few seconds later my number was calledâ¦maybe my morning was turning around!

However ten seconds later I realized that I was going to fall on the wrong side of that 50% chance of a successful trip. The woman asked me for my two passport photos, I took 2 out of the little envelope that I keep a stack of copied passport photos in (always need extras for travel visas!) and handed them over. She looked at me and asked when the photo was taken. I said a year ago (ok â so it was really 3 years ago). She looked at me and shook her head and pushed the photos back. âThey have to be within 6 monthsâ she said. Damnâ¦why didnât I choose the right lie?!

Even after my short time inside in air conditioning I was still sweating like a pig, but I had to go back out there into the oven. After just about getting hit while crossing the street and yelling expletives at the truck who didnât even attempt to slow down for me while I was in the cross walk – I decided that maybe my blood sugar was low and I needed some food. Or maybe that American woman in the consulate had rubbed off on me!

I retrieved my motorbike and drove over to a juice bar where I knew I could sit, have some juice and a sandwich, work on the internet and calm down a bit. After sitting in the air conditioning for a couple of hours working away in a very pleasant environment I decided that my mood had improved enough and I should try to get a new passport photo taken today. Granted, I did have to consider the fact that I was gross and sweaty from earlier in the morning AND I had terrible helmet hair, and this passport photo would be living with me for another 10 years. Then again, I never really look presentable here so what the hell, I might as well get the picture today.

I drove around to a local photo store and pulled up and asked about passport photos â they motioned upstairsâ¦great! It was 25,000 dong for 4 pictures or 29,000 dong for 8 pictures. I opted for the 8 pictures for a total of $2USD. I smiled to myself thinking about the last time I had to have passport photos taken (3 years ago ) in NYC and it cost me $12USD for 2 photos. Some things really are better here.

I went back to the consulate and once again had to go through the process of handing over every piece of electronics. This time I convinced them to just keep my whole bag, I think they took pity on me as I was sweaty and annoyed about my second trip there in a day. Once again the room was nearly empty and I was able to get called to a window right away. I handed over the form, and my spankinâ new pictures and the process was set in motion.

One of the lovely things about getting your passport renewed while you are traveling outside of the US is that you donât have to hand it over and be âpassportlessâ for weeks while they go through the process of renewing it. Instead, they simply take a copy and you keep your passport until the new one comes in. There are some advantages to living overseas!

Now I just wait for 3 weeks and I will be presented with my new key to the world!

10 Responses to "Renewing a Passport Overseas"