Durian â The King of Fruits 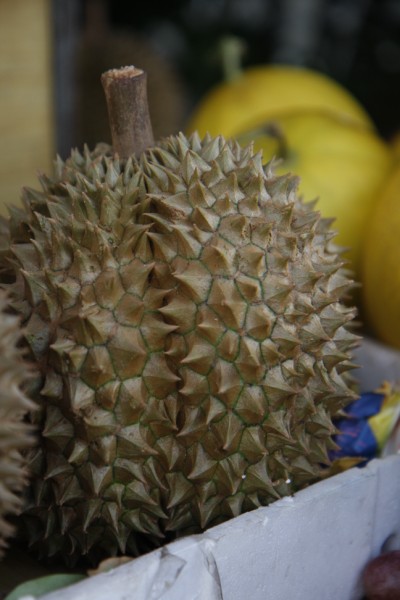 The King of Fruit

There are many hard things about living by yourself overseasâ¦I may write a book about it someday if I can ever force myself to slow down long enough. However, this July 4th weekend highlights one of those many challenges; missing family. Itâs my motherâs birthday, and my parentâs pending 50th Wedding anniversary, and my family is all back in the States celebrating it and Iâm here in HCMC. My sister and brother offered to help me come back for the occasion, but for many reasons (that I donât need to get into) I chose to stay here. She said that she understood my decision and that it was my choice, but I couldnât whine about missing out on the family celebration. A promise is a promiseâ¦

I decided to spend my American Independence day doing adventurous Asian things. I couldnât shoot off fireworks, so I instead decided to do the next best thing; eat durian fruit. Durian, sometimes called the King of Fruit, is a mainly found in SE Asia, This soccer ball sized fruit is normally loved or hated; loved by the locals and hated by westerners! Durian has a reputation, a stinky one. The fruit is so stinky that itâs banned from public places in Singapore. However since Vietnam really has few rules, thereâs no banning here â eat it, sell it, and transport it where-ever you want! Itâs durian season here so the markets have the familiar smell of durian wafting through them. Itâs not a pleasant smell; I think it smells of rotten eggs, however after prolonged exposure to the once foreign small, Iâve gotten used to it and can tolerate it now.

Durian is like the superhero of fruit. Not only does durian have a protective smell forcefield, but it also has a protective armor forcefield. Durian smells so terrible that no one in their right mind would want to eat it. Secondly it has a pointy hard outer layer making it hard to even simply carry. Luckily I had help on this adventure else I never would have made it on my own! I went with my good friends Lee and Tuyet, a lovely Vietnamese/American couple who has befriended me and agreed to show me the wonderful foods of Vietnam. I will write more on them later as they are a fabulous story on their ownâ¦.but I will stay durian focused for now!

View photos of the trip to the market and durian eating!

We went to the local market to pick up food for a Vietnamese feast; including durian. The market trip was great; smelly, chaotic, motorbike flooded, and sweatyâ¦a true local Vietnamese market. Lee and Tuyet had their regular stalls that they stopped at; the vegetable lady, the shrimp lady, the fish lady, and the fruit lady. Plus, we stopped and picked up a few lotus flowers too so they could have me try the seedsâ¦yum! God I love to explore markets and new foods; and itâs even more fantastic when you have people with you that can speak the language! Lee had me pick out a fish and I proceeded to watch in awe how quickly the woman pulled out the live fish, killed it, cleaned and scaled it. Seriously â she could win an award â check out the video:

Our last stop in the market was at the fruit stand. Thatâs where we bought our prickly durian. We brought our stash of food home and before we started preparing and cooking the feast, we decided to have a snack to tide us over as the process of cooking a Vietnamese meal is longer than simply throwing some instant noodles on the stove. We decided to try the durian. 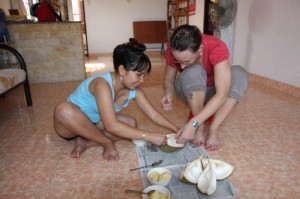 Tuyet showing me how to open it

Tuyet had to show me how to open the durian without getting impaled by its armor. Once I got the crack started, it pulled apart easily. Strangely I didnât notice the repulsive smell that much; once again proving to me that over time you can get used to anything. Sure, itâs not lilacs, but itâs not a terrible smell to me any longer. Since I felt as if I had gotten past the smell issue, I thought the eating part would be a breeze â that is until we broke open the durian and exposed the fruit inside. I took one look and realized it looked like an internal organ of some kind, a yellow liver. Silence of the Lambs came to mind; fava beans anyone?. All of a sudden it didnât look too terribly appetizing! I was once again reminded that the brain is such a powerful thing. Just seeing shape of the fruit gave me a negative reaction. Tuyet showed me how to gently get the fruit out of itâs protective armor without mushing the fruit; careful use of a spoon to scoop it out delicately. To my surprise it was then that I realized that the fruit did not have a solid consistency; instead if was delicate and mushyâ¦.kind of like really soft butter. 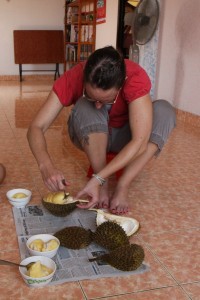 scooping the soft fruit out of it's shellPresenting my durian...yum?!

I tried a bite and was surprised as it wasnât what I was expecting. The smell didnât get me, but the consistency did. It was sort of like eating creamy frosting that had a vegetable and fruit taste at times. I saw one description of it on the internet as âFrench custard passed through a sewerâ. That seems a little extreme, but I think you get the point. The taste seemed to change in my mouth as I ate it which I wasnât too nuts about. I didnât hate it, but I didnât necessarily like it either. Lee and Tuyet laughed at me as I analyzed each bite. I eventually got through the liver sized creamy frosting concoction and it did seem to get better as I ate more. Maybe my brain just eventually switched off and I just ate instead of thinking about what I was eating. 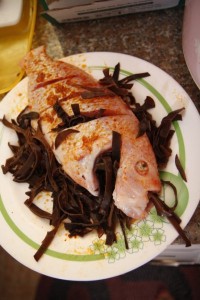 The very fresh fish we bought as the market

The rest of the afternoon was spent cooking up a massive meal of fresh fish with mushrooms and chilis, shrimp cooked in coconut milk, and clams in lemon grass and coconut followed by more fresh fruit for dessert. It was a Vietnamese feast! It never ceases to amaze me what can be produced out of a small, simple Vietnamese kitchen with 2 gas burners. One of my favorite things about the Vietnamese culture is cooking and food is a social process; similar to cooking food in Italy. Everyone joins in, it takes hours of preparation, and itâs more of a social gathering. As I sat on the floor and cleaned vegetables and talked to Lee and Tuyet about their lives in Vietnam, it was no different than sitting in a bar with friends drinking a cosmopolitan in NYC. The process of spending a whole morning from 7AM to 1PM shopping for, preparing, and eating food is normal here. I have to admit, itâs much better than going to Starbucks and then sitting around watching tv for the morning!

So, even though I didnât get to spend July 4th with family, instead I was able to spend it with new friends learning and trying new things. As for my durian experience, well, all I can say is that Iâm glad that I tried it. I didnât think that I could travel throughout Asia plus live here for a year and not try it! As I ate the creamy fruit I did have to remind myself that people actually LOVE this fruit in Asia. I think Iâll reserve my love for the mango instead.
Happy 4th of July! 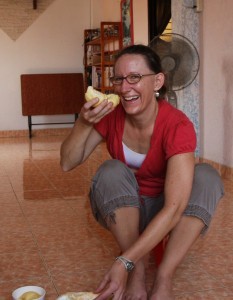 Ready to take my first bite!

31 Responses to "Durian â The King of Fruits"