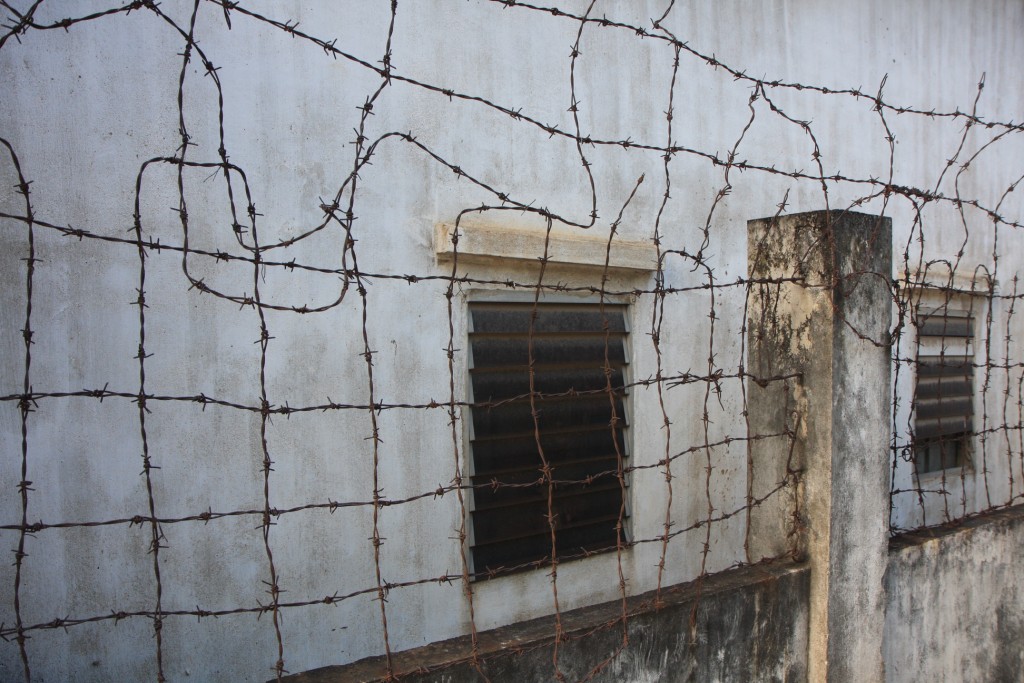 Letâs take inventory. Iâve been in Saigon for two months now. Itâs honestly been good and bad. Maybe bad is the wrong wordâ¦itâs more like âchallengingâ. Considering Iâm a challenge junkie, one would think that I could have rolled with all of this massive change in my life a bit better, but alasâ¦I am human.

I met a roommate and that ended up falling through (not off to a good start)
I went to a huge Ball the first weekend I was here (forcing me to shopâ¦oh darn)
I know three people that have contracted Denge Fever (and unfortunately Iâm living with them in the same house)
Iâm the proud owner of my own motorbike helmet (Iâm a safety girl!)
Iâve been caught in downpours while on motorbike taxis at least 8 times showing up to work dripping wet.
I have had one ânice attemptâ at an American cheeseburger, a pretty good Ruben sandwich, and tons of great Asian food â and have still managed to lose weight!
I am getting very little sleep thanks to the stress of trying to figure out answers for my life.
I have met the head of at least 6 companies here. (Networking has been a breeze in such a small expat community)
I have had 2 job offers outside of teaching.
Iâve eaten in establishments with rats running around at least 3 times. (keep in mind, these are only the ones I saw)
Iâve had one bloody bike crash. (but did end up with a nice pedicure when the day was over)
I have seen at least 3 other people crash or get hit by cars. (yes âI have insurance)
I have one friend who was hit crossing the street â and then had his wallet stolen on top of that!
I still donât have a place to live!

I suppose things could be better, they could be worse; regardless, itâs definitely an adventure. At least Iâm not living over a buffalo barnÂ Â any longer. That is a phrase that I will take to my grave Iâm sure. 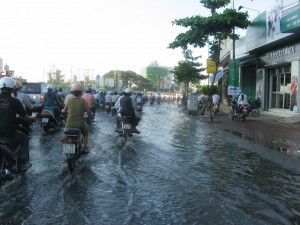 Itâs strange, I have really good days when Iâm on the back of a motorbike and feeling on top of the world; loving the fact that I am somehow conquering all of my inhibitions and fears and tackling the unknown. Then the next day, I hit a low; a day where I really wonder if I can make it. The mind games begin and intensify when you are solo. I wonder if I want to teach. I wonder if I can deal with all of the hardships of living in Vietnam (and there are many). I wonder if Iâve made a mistake. I wonder if thereâs any way that I will be able to really stick it out. Iâm coming to the sobering realization that I not only took on a new career that I am unsure of, but Iâve moved to a foreign country where the culture is very different. There is a vast difference between traveling in a country and living in a country; I think I knew that before I came, but now I really know it. Itâs no longer a simple thing to go buy milk at the store. In fact, buying milk at the store can now take me all day. That last statement is probably pointless since I canât buy milk anyway as I donât have a kitchen or fridge to put it in! 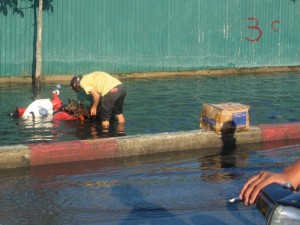 He's definitely having a bad day!

I honestly hate this roller coaster that Iâm on; mainly because I hate to feel weak and I hate to doubt myself. Yet both of those feelings tend to creep in and send me in a downward spiral about every other day. I hate feeling distraught with no one really to talk to except my computer.

I donât mean for this to sound gloomy, because I suppose if I really think about my time here â it has been pretty damn good. I have met some super nice people that will remain friends for life and who have taken me under their wing. These friends have graciously let me stay in her home with her family until I find a place to live. I have met friends that include me in social outings such as an opening of a new restaurant and boutique hotel and ate free sushi all nightâ¦I never complain about free sushi. So â things could be worseâ¦much worse. I could be back in America being inundated with elections coverage and bombarded with news on how our economy is crap and taking down the rest of the world with it.

Overall, Iâm surviving, trying to figure out how to stand still for a while. Thanks to everyone who has weighed in on my VOTE of what to do with my Vietnam life. I have made some decisions which really incorporate all three options â they involve still teaching part time for a while, doing business/IT consulting off and on, and working on writingâ¦none of this yields very much money â but at least it all yields freedom.

7 Responses to "I Will Survive"