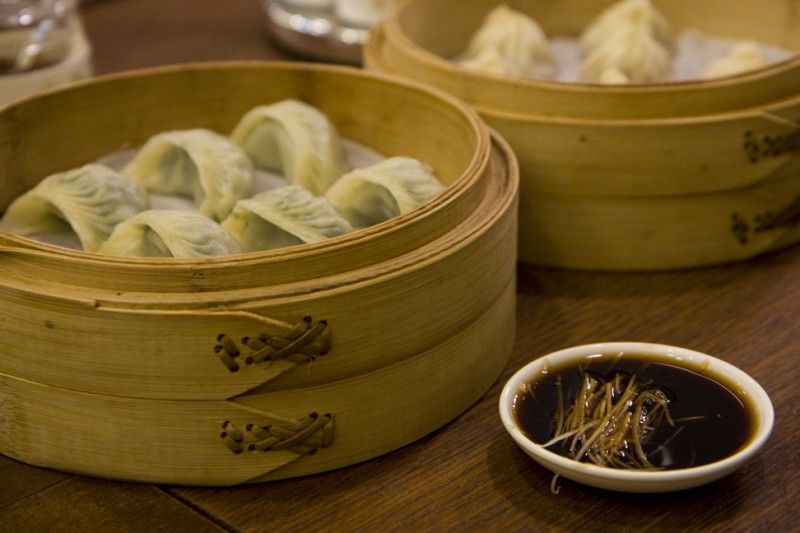 This was my first trip to Taiwan â country number 32. Was I going to see China or was I going to see Hong Kong – I wasnât really sure what to expect from the tiny island pummeled recently by typhoons. However, I had researched enough to know that at the very least I could expect some great food.

Why Taiwan? The story starts back in Morocco 2 years ago. Tiny Asian island vs. Arabic nation in Africa; the two donât have a lot of in common. However a person was their commonality to me; and the reason I was visiting Taiwan. There are advantages and disadvantages to living the vagabond lifestyle that I have chosen for the last three years. Disadvantages â living semi permanently, having no good insurance, having no regular income, having no dating life. However â there are also advantages and one of the big ones is that I form friendships with people from all over the world. While in Morocco two years ago, I met another American who was a teacher, unhappy with her current job and looking for some new answers to life. Somehow unintentionally (I swear) I convinced her to quit her job and look for another path that would bring her more fulfillment. I stayed in touch with her for the last two years electronically and followed her journey as she put a new plan into motion. The path she ultimately ended up choosing was an international one â teaching in the International school system; a perfect way to travel and be international, and still do what she loved â teaching. She took a job in Taiwan teaching at the American School. Hence â my reason to get to Taiwan!

My trip to Taiwan was an easy 3 hour flight from Vietnam. I was a little baffled at why the airfare was so expensive considering I was going there during their typhoon season. I was able to stay with Janelle who had another American friend, Jack, staying with her that weekend; this was the most Americans I had been around for a long time! 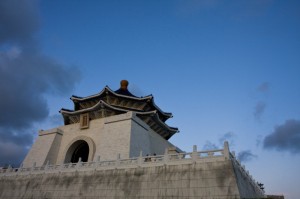 My first reaction to Taiwan was that it was a mix between Singapore and Hong Kong and definitely more developed than Vietnam. The terrain was also a pleasant surprise â rolling hills that surrounded the sky scrapers providing a âget-awayâ from city life. Read the guide books and they will tell you about the Taipei 101, formerly known as the tallest building in the world, the temples for Chiang Kai Shek, the hiking, and it will also mention the night markets filled with edible and unusual delicacies for your stomach. Sure â I did the typical tourist things â we dutifully visited Taipei 101, the temples, and we even went on a strenuous hike one morning. However my trip to Taipei really can be summed up by 4 letters â FOOD. With Janelle as a guide, we ate our way through Taipei, hardly savoring the last meal before we started to plan the next meal. 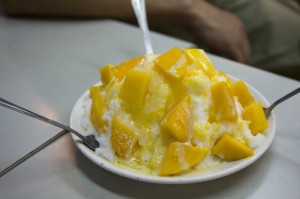 My flight arrived Friday night at 9PM, and by 10:30PM I was already at the Shilin night market eating an oyster omelet. Janelle didnât waste time! The night market had an aroma of stinky socks which I lately found out was the famous Taipei stinky tofu. I steered clear of the sweaty socks and stuck to things that smelled a bit more appetizing. At the night market we had oyster omelets bathed in some red sauce, mashed turnip cakes, pineapple cakes and my personal favorite – mango shaved ice. All were great tasting, but the shaved ice was like nothing I had ever had before. I was expecting a snow cone, but got a snow drift instead! The ice was light and fluffy, like melt-in-your-mouth snow before a single soul had touched it; pure.

The next day we were introduced to Bubble Tea in every flavor imaginable. Taiwan claims to be the home of bubble tea and based on how many bubble tea outlets there were; I would have to agree. Starbucks to America is like bubble tea to the Taiwanese. Bubble tea is this delicious tea mixture in any flavor (my favorite was passion fruit) with little gelatinous balls about the size of a rabbit turd. (Sorry â it was the only thing I could think of that size). Theyâre chewy and rather tasteless â but I love the texture they add to a drink. Sure, I suppose chewing your drink isnât for everyone, but I look at it like a meal instead! 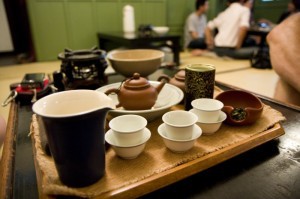 In addition to bubble tea, Taiwan is also famous for its tea houses. We went to a quiet old teahouse in the middle of Taipei and soaked up the rituals and serenity of tea in Taiwan. The Tea Teacher tutored us on the rituals of brewing, pouring and tasting; like wine tasting, or scotch tasting â it had rituals to be followed in order to complete the experience. The tea cups were so small it was as if we were drinking tea out of little shot glasses! Tea out of a mug = western, tea out of a little miniature bowl = Asian.

After seeing Taipei 101, we treated ourselves to sushi. I was thrilled to have sushi again as itâs one of my favorite foods, and I eat very little of it in Saigon (you would too if you saw the river bank here.) We didnât simply eat sushiâ¦we took it a step further and went to a sushi buffet! Yup â thatâs right â all the sushi I could possibly eat â bliss! I felt like I had walked into an Old Country Buffet Asian style! On the 4th floor of Taipei 101 is one of the best sushi finds Iâve ever been too; a never ending supply of good sushi; not the kind that comes out on a conveyer belt. Instead there were sushi chefs behind a counter taking requests! We waddled out of there and for a split moment I wondered if I had overdone it; would I ever eat sushi again? Yesâ¦itâs a safe bet. 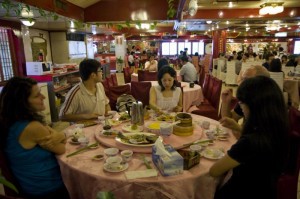 Next we decided to try another Asian delight â Dim Sum. For those of you who donât know itâs kind of like a mixture of buffet and mezes for Chinese food; small plates brought to you on carts and placed on your table. You know that you are at a great dim sum restaurant when you are the only white person there and no one is speaking English. We hit the jackpot in Taipei; some of Janelleâs local friends took us to a local dim sum restaurant. So local that their business cards didnât even have English on them so I canât even share the name with you! Regardless â the dim sum was great AND the atmosphere was even better. Her friends ordered us oodles of small plates of dumplings and noodle dishes; and even some chicken feet! 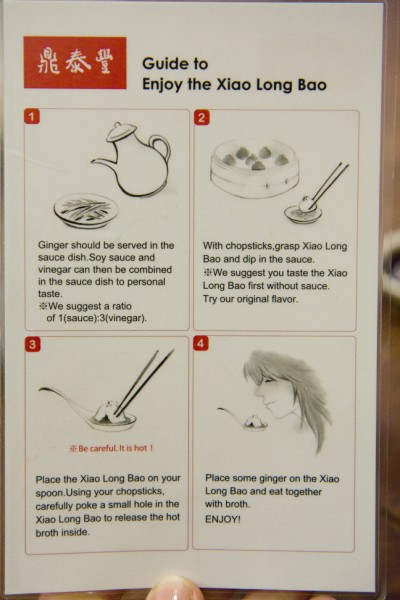 How to eat a dumpling

We saved the best till last â Chinese dumplings. When I traveled through China a couple of years ago this was one of my favorite foods. Steamed dumplings filled with pork or shrimp dipped in this vinegar soy sauce; it makes me pucker with joy just thinking of it! The restaurant we went to was quite popular and you could watch the chefs make tons of dumplings through a big glass window; kind of like you were at the zoo! The dumplings even came with instructions which I found rather helpful.

After our Taipei food fest we followed up our last dumpling meal with something quite American â Cold Stone Creamery. What a delight for me after being in Vietnam for a year; I kind of forgot about American indulgences â out of site, out of mind!

Finally, I had to fly out early in the morning and Janelle arranged a taxi for me. My taxi ride to the international airport the best I had ever experienced. The driver spoke English pretty well (which is quite an oddity among Taiwanese taxi drivers) and he engaged me in conversation. I wasnât much for talking since it was 6AM â but his energy was genuine. He asked me what time my flight, and shortly after I told him, he pulled down a side street and pulled the car over to a stop. The hair on the back of my neck rose and I tensed up immediately suddenly aware of my security. I surveyed my situation â could I get out, where were my bags, was there anyone around? He turned around with a big smile and said, âI got get us breakfastâ and he disappeared. I sat there dumbfounded. 3 minutes later he came back to the car carrying 2 coffees and 2 egg sandwiches from a local vendor. Never in all of my travels have I had a taxi driver buy me breakfast; he was one of a kind. For the next 30 minutes I drank my ice coffee and munched on my sandwich while we discussed his family, travel, Vietnam, America and anything else we could pack into 30 minutes. He refused to take any extra money for the foodâ¦a class act.

My long weekend was perfect. A great way to reconnect with Janelle who was a fabulous tour host! After all of this food she even graciously invited us to her Yoga studio where I paid for all of those food indulgences dearly. I think I arrived back in Vietnam with a little extra baggage; carrying a different kind of souvenirâ¦a belly!

If you’re a foodie and want more – check out Wanderfood Wednesday at Wanderlust and Lipstick!Â  A day dedicated to food posts around the blogging world!