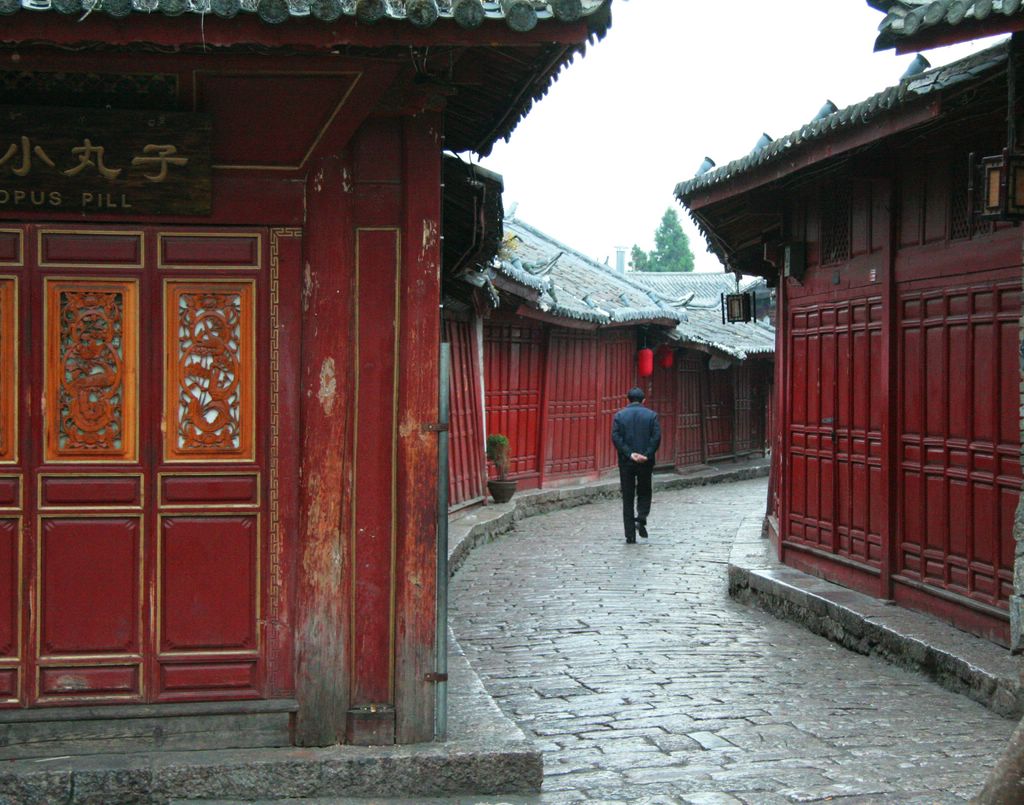 Iâm neutral on China. Some of it was better than expected and some worse. Then there were some things that met my expectations exactly such as the amount of people and the smog. Donât let my neutrality fool you though, I am happy that I spent 4 weeks there, observing the largest populated country in the world, and an emerging economic power. China seemed vastly different than its Asian neighbors â and I can sum that up with the term âimpersonalâ. As I traveled throughout the rest of Asia â I felt a warmth and a connection from the people and the customs. Yet in China â I never really hit that groove. Granted â it had its moments (most of the occurring when I was in Yunnan), but overall â I never really felt that I connected with the people and I think that also comes through in my photography of China.

Photo: Take this path, and don’t wander off of it!

I felt like I was always playing the role of the âwestern touristâ. Being taken to the tourist sites, the tourist shopping, the tourist part of town. It was as if the Chinese people/government were trying to contain the tourists to a certain path else they would have a China Syndrome on their hands. The few times I was able to break away from the tourist track and explore on my own within the local areas, it was rewarding. I felt accomplished for getting out of the normal path that everyone wanted us to see, and to finally see on my own. Maybe this was a product disciplined tour choreography was simply preparing them for their influx of visitors for the Olympics, maybe it was a form of control, or maybe it was a product of the tour companies that I decided to travel with â Iâm not really sure.

After having the opportunity to spend 4 weeks in China in various regions, I have put together a few of my observations that seemed to stand out to me. These are the strange things that I will remember about China long after Iâve left.

A Hard Dayâs Night
After touring and hiking around all day, all you wanted was a good nightâs sleep. Iâd get into my hotel room, take off my backpack, and flop on the bed in exhaustionâ¦yet as I flopped down, my ass was greeted to a bed as hard as bricks. Granted, I was traveling on a budget, so my hotel expectations werenât very high, however sleeping in China was like sleeping on a bed of plywood. The mattresses were HARD. Add that to the fact that the rooms werenât heated and many of the areas I visited had frost filled mornings. If it werenât for the electric blankets on the planks they called beds, I probably would have been covered in frost myself!

So you Think you Can Dance?

The Chinese love to dance….who knew? Every time I came upon a town square, a wide open space, or a simple highway underpass, there were groups of people dancing. No, not like a raveâ¦there were no glow sticks or pacifiers. Instead it was adults and elderly doing what looked like country line dancing. It was organized groups, dancing slowly in unison. While in Shangri-la, the Tibetans loved to dance. Every night they would gather out in the town square and show off their moves. Or maybe they were simply dancing to stay warm. Not a bad idea considering their homes had no heat besides a bucket of burning coal.

Bank Statements
Considering that small cities in China are big cities to most people in the world, there were always plenty of tall buildings around, even in the smallest of cities. I came to realize that most of the large buildings were banks. In fact, I started to amuse myself by counting the number of different banks I saw â each one slightly different than the other â some of my favorites:
Agricultural Bank of China
Agricultural Development Bank of China
Bank of China
Bank of Communications
Central Bank of China
China Construction Bank
China Development Bank
China Merchants Bank
Industrial and Commercial Bank of China
Industrial Bank Co.
The Export-Import Bank of China
The Peopleâs Bank of China
I think there is a type of bank for each type of person. I kept searching for my bank, âThe Unemployed Bank of Chinaâ, but I could never find a branch office when I needed one. Truly though, after seeing the myriad of bank names and large buildings, I decided that maybe all of the banking mergers in the US werenât so bad after all!

Where-ever you go in China, you will always have someone around to assist you. A restaurant, train, bus, or crossing the street. Everyone seems to be employed. From my perspective, there was always an army of workers around whether it called for it or not. The street crossing had 5 to 6 officers directing traffic, pedestrians and bikes. Restaurants had an army of staff to assist your every need. Hotels had 5 people behind the front deskâ¦when clearly 1 to 2 people could have done an efficient job. But then again, efficiency never seemed to be a concern. Keeping people employed seemed to be more of the concern. And maybe thatâs a good thing when you have a population of 1.3 billion people. But to my Western eye, it seemed inefficient and pointless. Working on a corner all day be a crossing guard for bikers â didnât really seem that necessary â especially when there were 3 other people there doing the exact same thing.

What is China known for? Fakes

Considering China seems to be the manufacturing plant for the world â it shouldnât come as a surprise to see a bunch of brand name items in markets with prices too good to be true. China is the land of fakes â purses, coats, DVDâs, jewelry, watches, pens, clothingâ¦if it is manufactured in Chinaâ¦then it can also be copied and sold in China. I constantly came across some of the nicest looking Northface jackets and backpacks that you could imagineâ¦for bargain basement pricesâ¦all fakes â but damn good ones. I couldnât tell the real vs. the fake stuff apart unless of course it was a Coach purse as Iâve been trained to spot fake Coachâ¦I think they taught us that on our first day of work there. If you want a bargain on a name brand â go to China and be prepared to negotiate. I honestly think many of the items were high-jacked on the way to the shipyard. The strange thing is that I never could figure out if the government condoned it or fought it. If they fought it â it was a passive fight, and they were definitely losing.

Even though these themes remain in my head when I think of China â I also have visions of the amazing landscape of the country (when itâs not engulfed in smog). The Great Wall and the Southwest mountain ranges were completely stunning, but changing fast. Itâs worth a visit to see for yourself. Just make sure that you bring some warm clothes, a good pillow, and your dancinâ shoes!