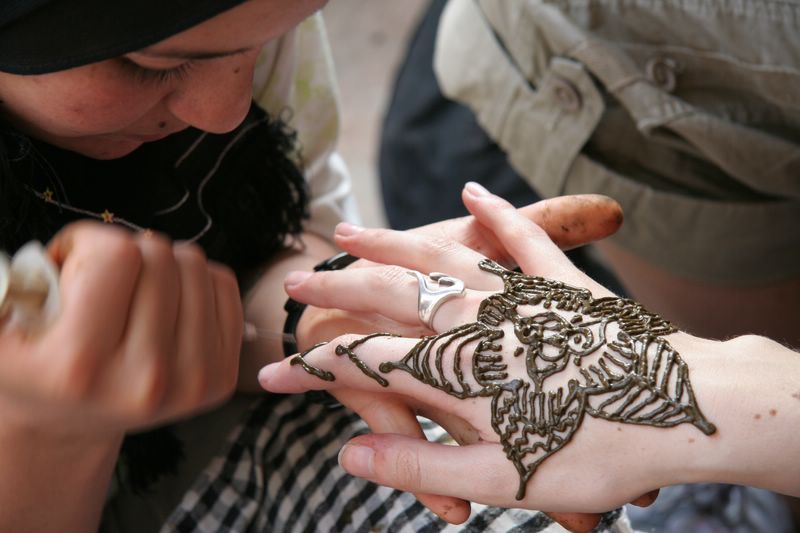 Getting henna art done high in the Atlas Mountains

For the last week in addition to my 50 lbs of luggage, Iâve been toting around eye drops, lip balm, and alcohol â welcome to Morocco. Itâs dry hereâ¦the orange ground begging for water, the sun burning brightly every day. My eyes are thirsting for liquid as are my lips and my skin. The sun beats down on us every day as it climbs into the high 90âs F. You have a constant, unquenchable thirstâ¦for something coldâ¦very cold. I honestly havenât seen a single cloud in the sky since I arrived here. There must be some ban on clouds in Moroccoâ¦they get stopped at the border of Algeria and get turned away because they donât have their proper papers to enter the country.

In addition to this dry heat, it is a Muslim country, which basically means that itâs a dry country â no alcohol. I donât think this really sunk in until about the 3rd day when I was sweating profusely, was frustrated with the haggling in the souks (markets), tired of being gawked at by men, and more than anything I desperately wanted a cold beer to simply take the edge off. All I could get in Marrakech was a cold orange juiceâ¦no vodkaâ¦just orange juice. There were no less than 30 stands selling orange juice in the medina of Marrakech. Only OJ, nothing else, just OJ; I guess they donât believe in diversification here! Granted â it was one of the best glasses of orange juice that Iâve ever had â but still not quite the same as a beer. However, you just learn to go with the flow in Morocco.

Adapting to a new culture

I left the comforts of Europe behind â and now Iâm trying to get my head back into traveling in very foreign cultures. I have entered a new, unknown culture – one of the largest and one of the most different â I have entered Arabia.   I’ve only really seen Arabic culture through Disney movies, The Ten Commandments, and Lawrence of Arabia â and none of these movies are very accurate!

There are so many new things to take in: the language, the food, the religion, the view of women in society, and the dress. Iâve really had no exposure to this beforeâ¦.nothing. On top of that, Iâve done very little research on the country or the culture prior to arriving here â so I feel like Iâm driving at night without headlights â cautiously moving forward slowly.

Knowing that I would be culturally challenged to travel through Morocco on my own, I decided to once again use the excellent travel services of Intrepid Travel with who I toured through Vietnam. Iâm doing a similar mode of travel with them, essentially backpacking with a group. Intrepid provides and books all the lodging and transportation and assigns a group leader that is familiar with the country â the rest is up to you. Iâm traveling with a group of 5 other people â 2 from Australia, 2 from England, and 1 other American â plus our leader, Karina. Intrepid Travel arranges basic accommodations (i.e. â lucky if we get hot water and really lucky if we get air conditioning), and local transportation throughout the country. Itâs a great way to travel through a Muslim country as a female solo traveler. I love being adventurous in my travels â but I wasnât ready to take on Morocco on my own. We have 21 days to travel through Morocco to hit many of the main cities and experience a great deal of the countryside via long bus rides!

Travel and transportation in Morocco

When I boarded the plane in Barcelona to Marrakech I got my first challenge. All of the airline instructions/announcements were in Arabic first, and then repeated in French. I waited for a bit expecting the English translation to come nextâ¦but it was just dead airâ¦damn, I wish I would have paid more attention in my high school French class. This was really one of the first countries that I had been to where English was not really the second language. In fact â Iâm not even real sure if it was 3rd or 4th or 5th as Spanish and the native Berber language all competed for spots after French. Of course as soon as I stepped off the plane hearing the foreign languages, immediately my Italian language study flooded my headâ¦great â a lot of good that would do me now.

Marrakech was a quite an awakening when I arrived late at night â the streets were filled with people â mainly men and you could hear drumming coming loudly from the famous square, Place Djemaa el-Fna. The Djemaa el-Fna (donât even ask me how to pronounce this!) is actually a World Heritage Site. A place where everyone gathers at night to eat from the food vendors, watch the snake charmers, enjoy the acrobats, listen to story tellers, fish for coke bottles â the list can go on and on. Our hotel was a very simple place, but itâs location was stellar â only a few meters off the Djemaa el-Fna.

Transportation has probably been the biggest adventure here so far. First off â there are the crazy taxis..a.k.a Grand Taxis. The concept of Grand Taxis is that there is a standard fareâ¦say $150 dirham. If you are the only person in the car, you must pay the whole $150 â however the more people you can fit into the car (whether you know them or not) the price goes down per person. This then causes the taxi to stop and pick up others along the way â reminiscent of the NY transit strike a few years ago when the taxis had to switch to âcar poolâ style.

Upon first look, these taxis look like old, dilapidated Mercedes from the 1970âs. They honestly look like they wonât make it more than a mile down the road â but somehow they can carry about 6 people and their luggage up mountain passes â itâs really a miracle. The drivers are very friendlyâ¦.to everyone else on the road. As we rode in a Grand Taxi up to the Atlas Mountains, our taxi driver waved to no less than a thousand people on the drive. It was as if he was in a Ford pick-up in the middle of Nebraska, waving to everyone that he passed â drivers, walkers, bikers, shop owners, and I think maybe even a few goats. I was amused by his hospitality on the road.

The Grand Taxis were normally quite tricked out. They sported fur dashes that were ratty and faded from the sun, various medallions swinging from the rear view mirror, a rhinestone cell phone holder, a meter that never worked, and one â yes one, window opener handle. You would hop in a grand taxi and immediately be baking in the oven-like back seat with the windows closed. Your first instinct was to roll down your window to get some air flow in there before you passed out â however your hopes were quickly dashed when you realized that there was a screw where the window handle was supposed to be. In vain, you would immediately try to fiddle with the screw seeing if you could get it to move the window down just by twisting it somehowâ¦it wasnât going to budge for you! This is about the time all of those stories about people dying from heat exhaustion locked in their cars in the summer sun come to mind. There were no window handles anywhere to be seen. Karina finally clued us in to the fact that there is one handle in the car normally â and itâs with the driver. If you ask for it, he will give it to you. You then go about rapidly screwing it on the stubby screw and rolling down the window while gasping for air! You pass around the handle for the others in the car as if it were a hookah pipe until finally you get enough air flow in the car!

Our other mode of transportation has been public buses. You know you are roughing it when you are riding with the locals. Air conditioning was a perkâ¦not a given. Driving across the desert countryside in a big, old bus, no way to open the windows, with no clouds in the sky, no air conditioning, crying babies, wearing pants that covered your knees and shirts that covered your shoulders, and no way to open the windowsâ¦wellâ¦it might have been some of the worst transportation Iâve encountered yet â and probably my most memorable.

I felt like we were all a bunch of turkeys just roasting in this big oven. You felt as if you were going to suffocate in the 90 degree bus. I simply tried to take my mind off the unbearable heat and watch movies that I had on my ipod. It was rather surreal to be watching a Hollywood blockbuster as you were sweating uncontrollably, surrounded my Moroccan locals who probably didnât have electricity let alone an ipod. However, watching Maggie Gyllenhaal shoot up drugs in the movie Sherrybaby at least took my mind off the misery that I was experiencing at the time! Strangely enough, I enjoyed the experience. It was enlightening traveling with the locals, roughing it and sweating off the pounds of pasta that Italy left on me. I would have it no other way.