All I heard was Bishnu yell âRunnnnn!â My heart raced and I felt as if I were moving in s-l-o-w m-o-t-i-o-n. I sort of knew why I was running, but the gravity of the situation was fuzzy to me; it felt as if my mind were working in slow motion too. Over the last 11 days of trekking there were many things that scared me; the narrow trails, smelly outhouses, falling ill, and a mouse on my bed. However this was the first time when my heart ended up in my throat. 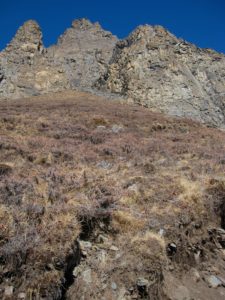 Todayâs trekking would prove to be the hardest yet. This was to be our last push to get to high camp at 15,100 ft. We took off early from Ledar in the cold. The sun was up, but the trail was still covered in shade; I could see my puffs of breath making me feel even colder. As I walked and tried to keep my hands warms by switching my trekking pole from hand to hand trying to warm my free hand in my pocket. I fantasized about the sunlight shining onto the mountainside. Finally, my fantasy turned to reality and the trail was lit up with a golden glow; I could feel the warmth radiate into me.

The distance we had to cover today was short, but it would take a while due to the elevation climb and the lack of oxygen slowing us down. We knew we had a few hours of hiking before we arrived at Thorung Phedi (14,600 ft). The day would culminate in one last big push up a steep section of switchbacks, finally reaching High Camp where we would stay for the night.

Most of the morning we were hiking along a gradual incline perched along the side of the mountain. We were in a rocky terrain. There was no grass, no trees â just rocks of all sizes. It created this patchwork looking landscape in all shades of beige highlighted by a bright blue sky. From a photography standpoint, I couldnât have had a better day to shoot.

Since the air was thin, we walked at a snails pace; but then again, so did everyone at this point. This is how I found myself following a group of 3 Polish women. Following them provided me a mental distraction. I just focused on their cadence and became fixated on the shoes hitting the ground in front of me. At this altitude and physical strain, your mind isnât really all there, so simplifying it necessary. In my trance like state, I concentrated on matching them step for step. My dad was a few meters behind me, and Bishnu was behind him. This part of the path was only wide enough to support single file trekking, so we all marched on slowly as if we were marching to war; young soldiers not really sure why they were on this mission, but going along with the rest of the unit.

I remember noticing a sign that said âRockslide Areaâ, but I paid no real attention to it. Hell, there were rocks all over, I kind of scoffed at the sign for stating the obvious. Shortly after this I heard a strange noise, but my oxygen-deprived brain was having trouble placing the sound. It sounded familiar like I should recognize the sound, but for some reason I couldnât really think it through, so I kept walking. 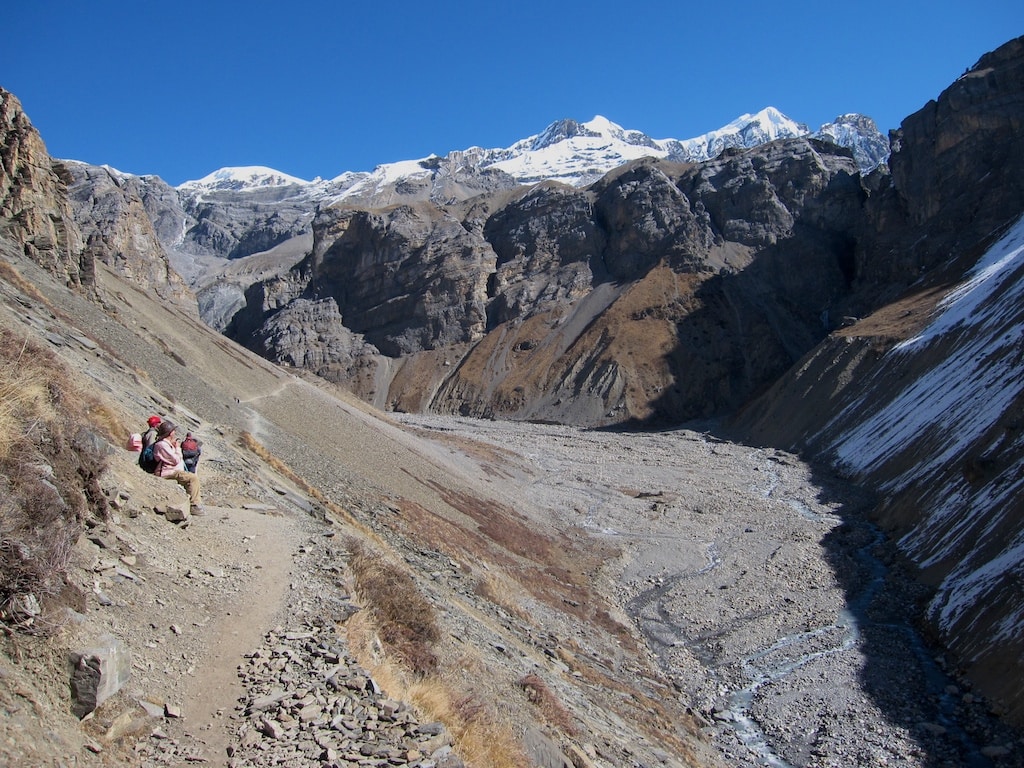 Thatâs when I heard Bishnu yell âRunnnnnn!â. His scream jolted me out of my trance and as I saw the women in front of me start running, so I did too. This all happened very quickly, yet it felt like I was having an out of body experience watching it all in slow motion from a distance. My mind finally kicked in and all of the puzzle pieces finally fit together. The sound combined with the âRunâ command from Bishnu meant there was a rock slide â Holy Shit.

My heart rate flew into overdrive and in my confused terror without turning around, I instinctively yelled back to Bishnu âGet Dad!â I could hear him in the distance behind me, but I knew he wasnât close to me. The trail was narrow and there was nowhere to go but forward or backward. We ran along the trail until we could get to a safe spot without loose rocks rolling down the mountainside. We all stood there huffing and puffing in shock. Dad was ok, Bishnu was ok, the women ahead of me were ok. We were all fine, but we had a huge scare. Apparently some loose rocks a few feet wide were rolling down the hillside â if one hit you, game over. Of course, once one rock falls, you never really know how many more it will trigger. We were lucky that day, there were just a few loose ones. However we were all reminded this was not a Disneyworld ride, this was the real thing.

We stopped at the encampment of Thorung Phedi to compose ourselves with some hot tea and a cinnamon roll. Our day was far from over. We took a deep breath and began the steep switchback climb. It looked and felt as if we were walking to the heavens. We took lots of breaks and took our time trying to enjoy the moment as we caught our breath.

Video of the steep pass – your legs will hurt when you watch it!

On our way up, we met a certifiably insane French mountain biker riding down the steep switchback trail. He stopped and talked to us for a bit asking us how much further to Phedi. We learned he had actually mountain biked up the other side and over the pass today, and was now on his was down. 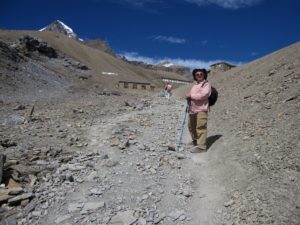 These switchbacks were scary enough simply hiking, but on a mountain bike that was insane. Oh yeah â did I mention that he wasnât even wearing a helmet? To top it off he was ill and had mild AMS which is why he was trying to rapidly descend. I couldnât even watch him as he took off down the switchbacks further, it terrified me.

Finally, the switchbacks straightened out and we were walking up an incline between two peaks. There we could see the one little guest house at High Camp â we had made it to our destination â finally. The excitement of completing the switchback climb, which some say is the hardest part of the Annapurna circuit, filled us with elation.

I was relieved to be finished hiking for the day, so I took my camera and walked around camp taking a bunch of photos with the brilliant blue backdrop. However, my elation was short lived. I met my dad in the dining hall for a late lunch, and thatâs when my mind started to wander into tomorrow. I wished that I could better control my thoughts as they seemed to spiral out of control; mainly into images of my dad or me taking a wrong step and sliding down the mountain. I had vivid images of exactly what could go wrong tomorrow. 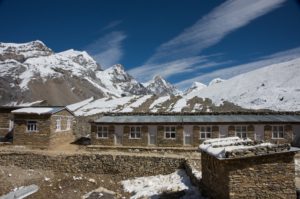 To try to control the spiral I took the âmedicineâ that I always takeâ¦I journaled. My nerves and emotions come out through the pen and land on the paper; a purge of my fears.

The rest of the day we spent in the dining hall with other equally nervous trekkers. I could tell my Dad was nervous, but he covered it well. He socialized with everyone and was generally the life of the party in the dining hall. I watched as he entertained people telling stories; the âaudienceâ was laughing as was he. This is a side of my dad I rarely see â a side which only comes out when I travel with him. I felt lucky because I knew my brother and sister donât see this side of him as I do.

He was not just my dad, but he seemed to play everyoneâs father figure. The 3 Polish women we were following during the rock slide hung out with us in the dining hall. One of them was quite sick from AMS and Dad made it his personal mission to worry about her. 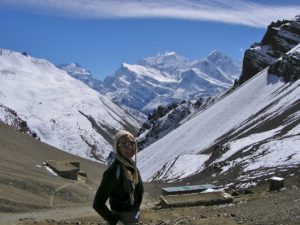 Enjoying the View from High Camp

In fact, all of our new trekking friends, as well as our guide Bishnu, bonded together and provided our first aide kits, advice, and well wishes for her as she went to bed that night and. All of us were worried about her.

That night we filled two water bottles full of boiling water to put in our sleeping bag in order to stay warm. This would be the coldest night by far and of course there was no heat in our room. We put on multiple sleeping layers and set our alarm for 5AM. I laid down knowing my sleep would be restless and angst-filled; however like it or not, 5AM would arrive. At 17,770 ft, Thorung La would be there, the question was, would we be there?

View the photography from Ledar to High Camp Trek or watch the slide show below!

Like the Tiger Balm Tales? Â Then start from the beginning!

8 Responses to "Beware of Falling Rocks"