A River Runs Thru It â Annapurna Circuit 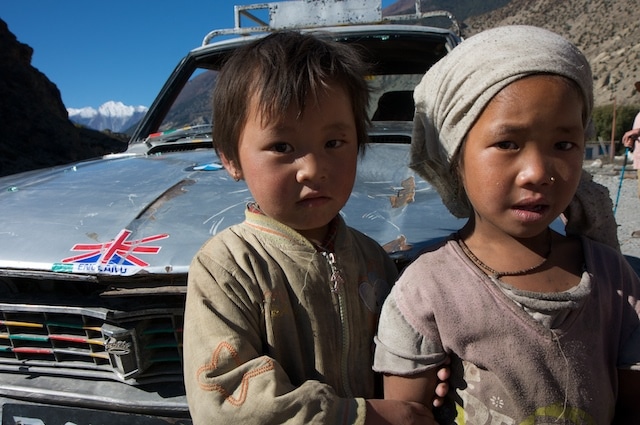 A River Runs Thru It

The sign read Welcome to Marpha! Delightful Apple Capital of Nepal. I wondered if Johnny Appleseed was the mayor of this little town along the Annapurna Circuit. Aside from the Thorung La Pass, Marpha seemed to be the highlight of the circuit. We had been hearing about the âApple Capitalâ for days now from other hikers. It was finally time to experience it ourselves. 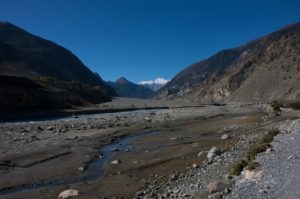 We had an easy hiking day today. We stayed off the new road and Bishnu instead led us through a flat riverbed away from the dusty, boring, road. The good news is that the hike was completely flat today. Therefore we could take our time and slowly traverse the riverbed.

This side of the Thorung La Pass was different than our last 2 weeks of hiking. It was more touristed, more modern, windier, and strangely more barren. The riverbed was massive and filled with rocks of various sizes while the surrounding mountains jutted up pointing to the heavens. As we hiked, I imagined the whole valley flooded with a web of fast flowing rivers during the monsoon season.

We watched in excitement every time we saw a small plane fly overhead arriving and taking off from the Jomson airport. As if we had been stranded on a island, the plane and accompanying sound was the sign of civilization; something we hadnât experienced in a long time. Additionally, maneuvering landings and take-offs at 10,000 ft between mountain peaks isnât something a pilot takes for granted; we enjoyed the show. 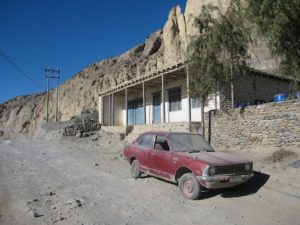 When was the last time this Corolla was driven?!

Children followed us as we hiked along; they were on their way to school and I handed out tattered post cards of America for them to take to their class and share. They giggled with glee upon receiving a post card and seemed to guard it as if it were gold plated.

One surprising thing that we started to encounter was cars. However, it wasnât the typical car, it was an early model Toyota Corolla â and they were everywhere. It seemed this is where Toyota Corollaâs came to live out their last years of life; here in this riverbed. I wasnât really sure if these cars that were parked alongside run down houses even were functional. However I felt like they had to be functional else how would have they ever made it here to these high altitude resting places? For a moment I wondered if donkey trains (or even porters) brought them up part by part; it certainly wouldnât have surprised me if that were the case! Maybe Iâd see a transmission and a steering wheel on a donkey pass me by today.

The sign to Marpha reminded us that we were entering something unique â the Delightful Apple Capital. The town was nestled into a colorful hillside with flags of temples poking out as sky scrapers. There was one narrow main path into town and one bypass around town for the buses and other random, dusty vehicles to utilize. 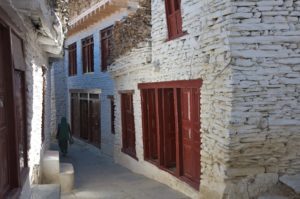 Marpha was unlike any village on the circuit. As we walked into the pristine town my first impression was âThis is Nepal?â The entire town of stone buildings were painted in white with burnt red trimmed doors and windows. It was an out of place gem much like the blue and white island of Santorini Greece or the blue hill town of Chefchaouen Morocco.Â Â The main path thru Marpha was spotless and lined with souvenir shops and guesthouses. The storefronts showed off their best big apple pies and crumbles in bakery cases enticing you to enter. I rubbed my eyes trying to clear my vision; I felt as if I was Alice and had fell down the rabbit holeâ¦where was I?

In Vietnam I would eat fresh fruit every day; however, hiking in Nepal made me fruit deficient. I think I had one orange and one apple in the last 2 weeks! The piles of apples stacked elegantly along the path was calling my name! Marpha was my fruit savior! 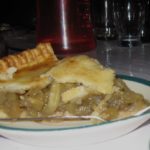 After a lunch of soup, apple juice and apple pie we went off exploring the narrow pathways of Marpha. As we walked around taking photos we surprisingly ran into an old friend, Jacque. I had last seen Jacque in Manang when he said goodbye to me through my door as I was severely sick and feverish. I never imagined Iâd see him again as he was days ahead of us. However, this trail is like a small town in a way; you run into people you know all the time â a weird sensation in a foreign country.

My dad had a fabulous analogy of friendships along the Annapurna circuit. Itâs as if the circuit is a stream and you and a friend drop a twig in the water from opposite banks. The twigs float downstream at different paces. Sometimes they meet and they float apart again. Sometimes on gets stuck in a place and swirls around a bit and then breaks free; eventually the two twigs meet again. 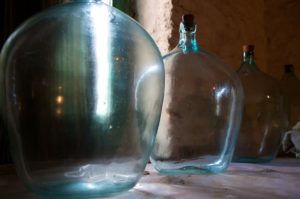 We found Jacque âswirlingâ in Marpha and it allowed up to catch-up with him. This time I could at least stand upright! It was great to reconnect with friends weâve made along the way. He and his guide Yam had a good trek over the pass. They had changed their plans to avoid the new roads and kept Marpha as their home base spending their days trekking to the nearby villages.

Besides eating apples and shopping, thereâs plenty to see around Marpha. We trekked to a government run distillery and saw how they made the famous Marpha Apple Brandy. It seemed to me that the process and operation was similar to how my grandfather made moonshine in his barn!

We also hiked to a Tibetan Refuge Camp in a beautiful forested setting along the river. The camp was funded and provided by the Nepalese government and had been in operation for many, many years. Kids and animals were everywhere! The locals were working on a large restoration project on their temple.

They let us in to view the progress and collect a small donation. The temple was dark , dusty and filled with old Buddha statues and drums. I felt as if I had walked onto the set of Indiana Jones â minus the snakes plus a thick layer of dust.

That night we had some great food and of course more apple treats; apple crumble. Then suddenly another branch in the river found us. Our friend Ramen (who we met on summit day) walked into our guesthouse with a bottle of Apple Brandy and some friends he met along the trail. It turned into a party as we all sat and enjoyed our brandy sharing stories and laughing into the night. This river was full of old friends who floated in and out of our Annapurna Circuit.

Like the Tiger Balm Tales? Then start from the beginning!

8 Responses to "A River Runs Thru It â Annapurna Circuit"