Travel Back in Time 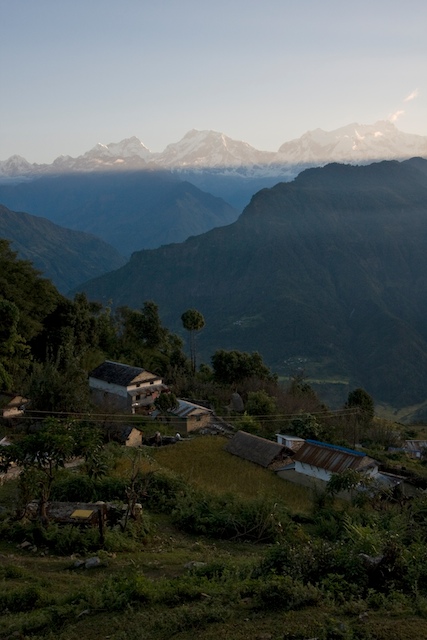 The hilltop village of Puma at Sunrise

We said goodbye to the bustling city of Kathmandu and hopped in our time machine which took us back in time about 50 yrs. A time and place where electricity and plumbing were not guaranteed, where harvesting was done by hand, and transportation meant your own two feet. We had actually hired a car and driver to transport us plus our host, Giri, to Puma. No, not the shoe factory; Puma is the tiny village where I volunteered 1 year ago. I was going back to see old friends and students, to see how the village had evolved, and to truthfully see how much I had evolved.

When I volunteered in the little village of Puma prior, I was in complete and utter culture shock. Yes, even a seasoned traveler like myself can still be jolted by going from New York City to remote mountain village; sleeping above the buffalo in a little barn with no plumbing and sporadic light. However, after a whole year of living in the undeveloped world in Asia, I felt like mentally I was much better prepared for this trip to Puma. However, this time my father was traveling with me and I had no idea what he would think of the simple little village. Granted, he grew up on a farm in the middle of Nebraska during the depression, so I figured that this trip to Puma would be a trip back in time for him. 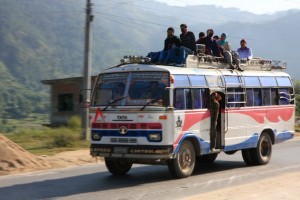 A seat with a view

As we drove to Besisahar we barely said a word to each other in the car. Simply looking out the window was all of the entertainment we needed. There were loads of people on top of buses, cows grazing in the middle of the highway, a random man sleeping in the shade on the highway (no joke), people selling huge bunches of bananas, and of course the many people working out in the fields during this harvest time. Even with all of this activity going on outside the window, it was a relatively quiet day for Nepal. It was a national holiday, Tihar (aka the Festival of Lights). Tihar is a 5 day festival where each day has a special meaning. This day was a day when groups of children go door to door and sing traditional songs in exchange for money or small gifts. Hmmmm â sound familiar? Trick or Treak â¦minus the costumes.

After eating our first taste of dhal bhat in Besisahar, it was time to do the hard part of the journey to Puma. No, we werenât doing the 3 hour hike up to Puma as I had done in the past; instead we were taking the Jeep. Giri , Bishnu (our guide), Deil (our porter), and my father and I shared a jeep with other random villagers and we took off up the steep, bumpy climb towards Puma.

This is when you start to question your definition of the word âroadâ. To me, this dirt track littered with boulders and pot holes wasnât a road, to the Nepalese it absolutely was a road. As we rocked back and forth on the steep mountain âroadâ teetering next to the edge, my dad looked at me and said, âpeople in America would pay lots of money to go on a ride like this if it were at an amusement park. Plus, this ride isnât short like a roller coaster, instead itâs 1 hour long!â This was a great introduction for him into Nepal. This is where his views of the world started to change. Your idea of normal, good, bad, difficult are completely redefined. This is what I love about travel in developing countries â it pushes your mindâs boundaries of ânormalâ. 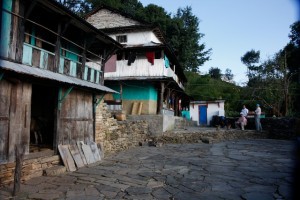 We arrived in Puma with a layer of dust over us and everything else in the Jeep. They dropped us off at the school â where I taught; it looked the same. In fact, I was a overwhelmed with the feeling of I never left. It felt good to be back â really good. I was aware immediately of my confidence in my surroundingsâ something I lacked when I was here prior. We took our bags down the familiar stone steps to Didiâs house where she and Ama waited for us with a big smiles and flowers.

Quickly cups of chai were served with snacks. It was as if I had returned back to my home after being away at college; Didi had made all of my favorite things to eat! I surveyed the house; it looked the same â exceptâ¦wait a minuteâ¦whatâs that? A new building attached to the houseâ¦a bathroom! Damnâ¦that would have made my stay here last year easier! 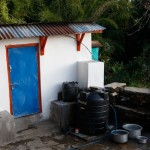 The International NGO, World Vision, had donated bathrooms to each house in Puma last year.Â Â While I was there the villagers were in the process of building outhouses on everyoneâs property. Didi already had one, but they went ahead and built a new oneâ¦bigger, better, with pseudo plumbing (a hose that ran from the spicket up the hill and down into the new bathroom). It was big, clean, and it had electricity â joy! No more bathing at the water spring with the villagers watching me as if I were a Broadway show.

That night we all sat around and ate Didiâs delicious Dhal Bhat. My father was so enamored by the hospitality that he ate like the localsâ¦with his hands. They all got a kick out of him trying to scoop up the dhal bhat with his fingers; everyone trying to give him advice. I loved to see him partake in this new culture â a sign of a wonderful traveler; I was proud of him! 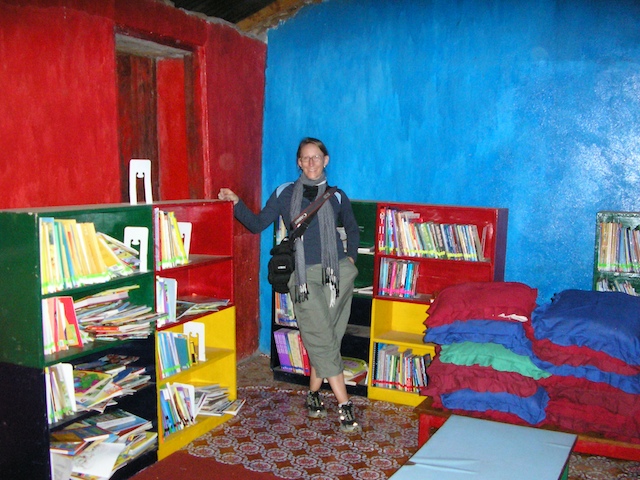 The bookshelves I had transported

The next morning I got up early and went walking around the village with my camera. It was just as I had remembered â within 10 minutes I had a stream of children following me watching my every move. My father, Giri, and I went to visit the school. When I left Puma last time I gave the school money to have bookshelves moved up via Jeep from Besisahar. They unlocked the library to show me the bookshelves; I shrieked in glee as I had forgotten about them until this moment. It made me so happy to see such a great looking library for the kids! We played around on the giant bamboo swing made special for the Tihar holiday and then returned to Didiâs house for chai and my favorite donuts!

Back at Didiâs there was a crowd of people milling about the porch. Many of the people I recognized as the town chair people and kids I had taught. I looked around at the people sitting and staring at us and realized that the town of Puma had all come to wish us farewell. This wasnât just an âoff the cuffâ farewell, this was elaborate. They placed two chairs in the middle of the porch and everyone gathered around. They brought the elder of the village who was 83 to come and give us blessings. I believe that by having the elder do it, it conveyed respect for my father who is 73. They gave each of us tilaks (a mark made of sandalwood paste on the forehead as a blessing or mark of auspiciousness), and a khata (a white silk scarf signifying safe journeys), as well as a mala (a wreath/necklace of fresh flowers). They gave my father a traditional Nepalese hat and me a beautiful purple pashmina. As if this wasnât moving enough, each person and child came up and gave us more malas around our necks. The outpouring of blessings from the little village of 45 houses was overwhelming. I found myself wondering what we did to deserve this attention? The villageâs generosity, the hospitality of Didi and her family, and the uniqueness of this culture was pure and overwhelming. Â Yes…a few tears of happiness (the best kind) were shed.

I had been worried about returning to a place that I had been before. Though, Iâm not really sure what I was so scared of. I was surprised by how good it felt to return back to a place. Iâve NEVER had a welcome/goodbye like this before, and was touched beyond words; even more so since my father was experiencing this with me. At that moment, I was proud to be a traveler. I look at myself as a messenger for Puma to the rest of the world; showing people how wonderful cultural exchange can be when you open yourself up to it. I know that my goodbyes that day were only temporary. Puma is my home in Nepal, and I will go back â again and again.

View Snapshots of our travel back to Puma 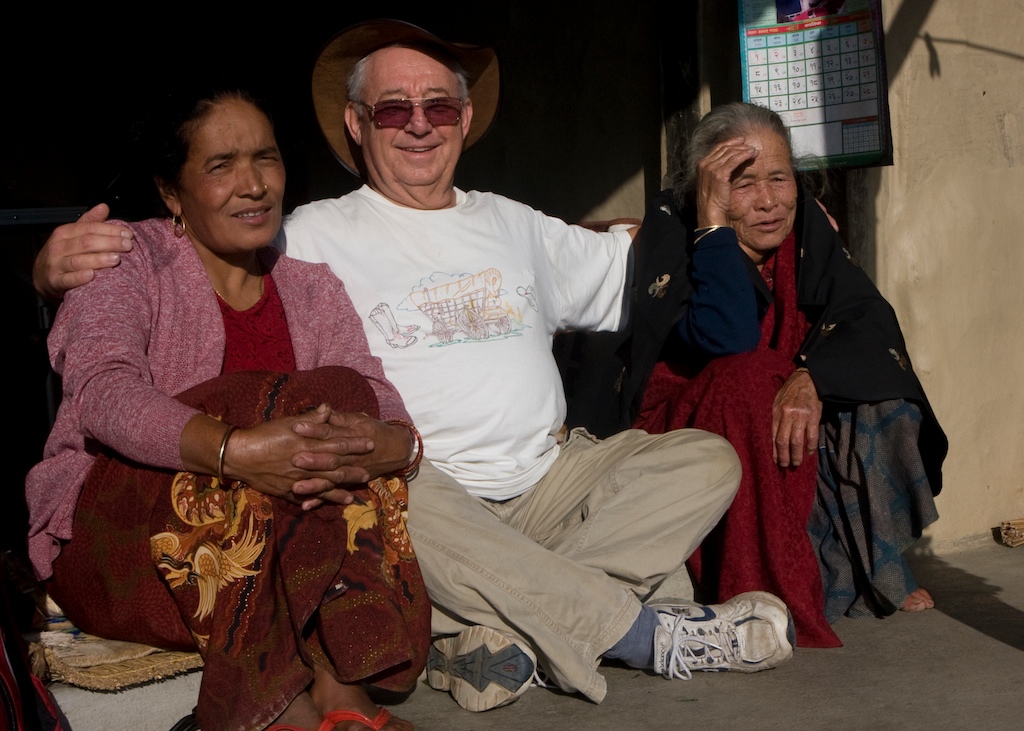 Start at the beginning of the Tiger Balm Tales:
Vol. 1 – The Begining of a Nepal Trekking Plan
Vol. 2 – Preparing the Parents
Vol. 3 – Annapurna Itinerary

9 Responses to "Travel Back in Time"