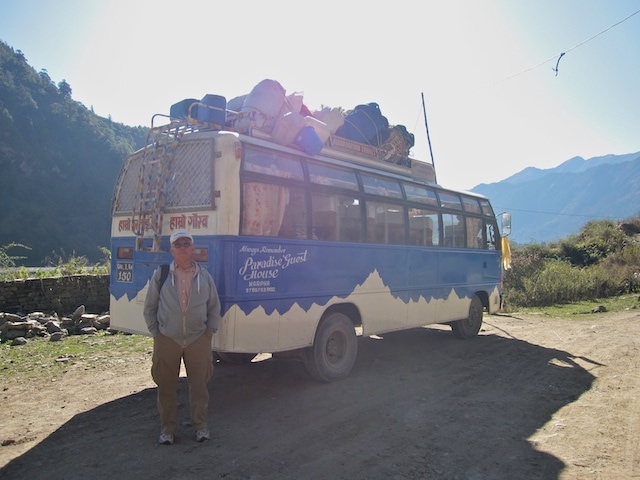 How do you define a road? Itâs all relative â right? I had long ago left behind my vision of what a road should be once I started long term travel in places like Kenya Mongolia, Laos, and Vietnam. Shoulders are for sissies and horns are an art form. I thought I was used to dangerous roads, but today I met my match.

I had my last apple pancake early in the morning with a strong cup of coffee. I was sad to be leaving the unique town of Marpha, but we had to keep to our schedule. We were still trying to make up days since we had taken longer than expected to get over the pass. Making up days was relatively easy to do since on this side of the pass because there are âroadsâ â at least thatâs what the locals call them. We went outside of Marpha and waited along the side of the road to catch a bus that would take us down the mountain into Tatopani. By foot this would have taken us two days, but by bus we were told it would take about 5 hours.

We waited at the âbus stopâ with Bishnu, Diehl, and a handful of other tourists; we huddled together to stay warm on this chilly morning. We were still in the shadow of the mountain as the sun hadnât risen high enough to bake us yet. The bus of course was running on âNepaliâ time so we stood around and froze for an hour; our emotions dashed every time another bus passed us by.

Finally our bus arrived and we piled on with the locals. Our bags were âsecuredâ on top of the bus with a mountain of other bags and camping gear. I tried to not think about my laptop precariously perched atop the bus as if it were a cherry on top of an ice cream sundae. We squeezed into our cold seats as bags too big to be put on top were thrown in the aisle. Large bags in the bus aisle meant that passengers had to walk on top of them to get on and off the bus; which is really not much different from the terrain we had been hiking in/on for the last 2 weeks!

The bus of course was over capacity; capacity doesnât really have much meaning in Asia. If there is space, it will be used. With a long blow of the musical horn, we were off on a harrowing adventure. Our little top-heavy bus took off lurching side to side like a drunk elephant teetering along a plank; I was immediately on edge. 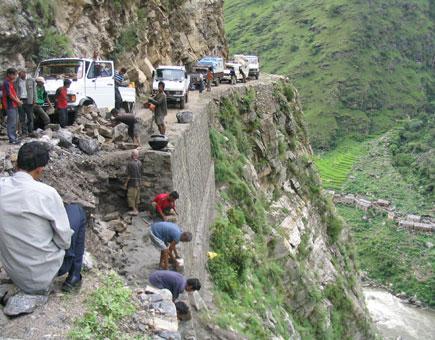 We started off on a relatively good road. It was spacious in Asian standards with a gradual decline. It was dry season which meant massive amounts of dust were in the air â so thick at times it was like a fog. Other trucks would pass us on the road leaving a thick layer of dust to wasp around the bus. In order to protect myself from inhaling dust for 5 hours, I wrapped my pashmina around my head so all you could see were my eyes; a trick I learned in the Sahara Desert. My dad was sitting by the window and didnât seem phased. He was looking out the window like a child, mesmerized by the landscape.

As we continued on, the road seemed to become more narrow and the decline more steep. Dried tire ruts became more prevalent and soon it seemed that we were on a one lane road descending down a windy mountain-side. I tried to disappear mentally for the next 4 hours as I rocked form side to side as if I were on a ship on the ocean.

As the jolts and rocking became worse, and travel became even slower I became more anxiety ridden. I vacillated between fear and anger; I wondered who in the world deemed this a drivable road?! Occasionally Iâd hear the guy on my left say âOh my Godâ; which would instinctively cause me to open my eyes jolting me back to my terrifying bus reality.

Even though I had authored a piece about How to Survive Being a Passenger last year, I wasnât able to take my own advice. I was so scared I was paralyzed. My mind kept on telling me to take pictures and video as this would be a fabulous experience to share on the blog! However I was so scared that I couldnât bring myself to open my bag and get out my camera. Apparently no one else has taken pictures of this road because I scoured the web trying to find some to accompany this post and found virtually nothing! Â At a rest stop I took this one photo of Dad by the bus – that was the best I could do! 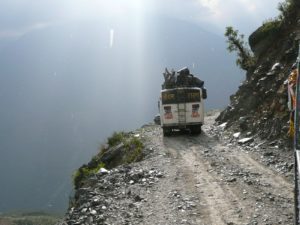 My fear made me mute. I didnât say anything to my Dad, I just wanted to disappear under my pashmina. My dad tried to strike up a conversation with me. He asked me if I saw them load up the bus; he thought it looked pretty top heavy and wondered how the bus driver dealt with that. I looked at him in anger and told him I didnât want to talk about it! He must have understood how scared I was as he never said another word to me on the trip!

Normally on these types of bus/car rides I can find an inner peace; feeling good about the life Iâve lived and accepting that the ride could very well be the last of my life. However this bus ride was different. As hard as I triedâ inner peace would not come. Maybe this was because my dad was sitting next to me and I once again felt this unusual sense of responsibility. I kept thinking about my mom and siblings and what they would think of this crazy ride I had brought my father on. I think I can accept dangerous situations when Iâm solo, but when Iâve convinced someone else to come with me, it creates a sense of responsibility; Iâve put them in a dangerous situation.

Meeting another vehicle meant a slow, complex maneuver with one of the vehicles hanging practically off the edge of the âroadâ as little rocks slid down the steep mountainside. Once I looked out of my pashmina and saw TWO buses coming towards us; when I saw the maneuvering going on I quickly clamped my eyes shut again and tried to find my happy place.

Our luck ran out when we were in a wet area near a river. We drove through a waterfall and got stuck in the muddy ruts. The driver tried his best to free the bus from the mud, but eventually gave up and motioned for everyone to get off the bus. We had to shuffle out, climbing over the bags in the aisle. I wondered if the driver and conductor were going to make us push! Luckily they maneuvered their way out of the soft rut and then we all piled back into the bus 30 feet up the road.

Soon the bus started picking up even more people; locals who needed to catch a short ride to Tatopani. They sat on top of the bags in the aisle. This last leg of the trip was the worst. The narrow road was carved out of a mountain side with hairpin curves. We teetered and sputtered down the dusty mountain at a snails pace. If someone would have given me the option to get out and walk, I would have. My own two feet had to be safer than this bus! 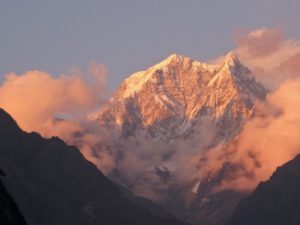 The road from Marpha to Tatopani is relatively new. It was just completed in 2009. I personally think the only reason why it wasnât included in this list of theÂ Worldâs Most 10 Most Dangerous Roads is because it is so new. I predict that it will easily make itâs way into the Top 10 this year.

After 5 hours we finally arrived in Tatopani where I swaggered off the bus, dusted myself off and promptly followed Bishnu to guesthouse where I could take a shower, sit down in a stable place, and have a beer. Alcohol at altitude is always good to calm the nerves! Â The silver (or should I say pink) lining was the sunset that evening – reminding how great it is to be alive!

Like the Tiger Balm Tales? Then start from the beginning!

12 Responses to "Danger! Curves Ahead"