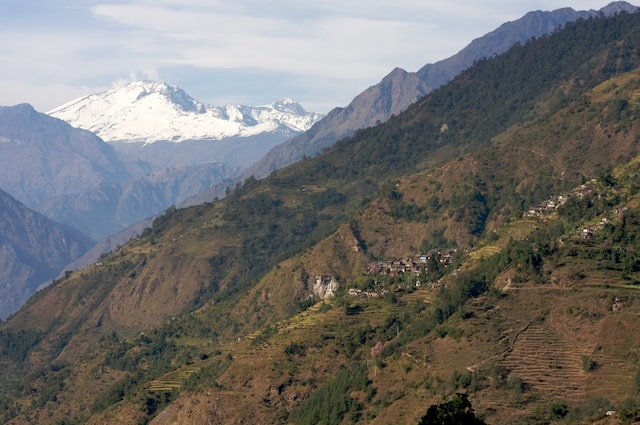 Heading back up the terraces

We had been on the trail now for 18 days. We no longer had that rookie look in our eyes. We were no longer surprised by cold showers, the same menu, donkeys squeezing byÂ us on the trail. We were old timers. We had 4 days on the trail before we hung up our boots in retirement. Dad and I had one last pass to get over, and then on to civilization.

Today we were starting a two-day climbâ¦yes climb. Even though we had peaked on the Thorung La Pass 3 days earlier, it wasnât all downhill from there. Instead it was downhill â and then uphill again to 9075 ft and then back downhill into Pokhara. However what made this climb different was that this was stress free hiking. Unlike Thorung La Pass, we knew we could make it to Ghorepani at a mere 9075 ft â no problem. Itâs really amazing how enjoyable it can be when you arenât constantly worried about âwill I make it?â

Tatopani was a nice stop for us once I calmed myself from my harrowing bus ride. Â Tatopani is a popular stop along the Annapurna Circuit thanks to its natural hot springs; trekkers tend to use it as a rejuvenation stop before continuing the upward climb to Ghorepani. Try as I might, Iâm not really a Hot Springs gal. I realized this must run in the family, as my dad also had no interest in the hot springs. Instead, my father and I decided to simply use Tatopani as a good internet and beer stop skipping the famous hot springs.

Instead, Tatopani offered me a special kind of therapy that my body was craving; fruit therapy. The little village was tropical compared to the high altitude peaks we had come from. Orange and lime trees were abundant and my body welcomed some sweet/sour citrus fruit into my system; better than any hot springs in my opinion!

Leaving Tatopani after a hearty breakfast including fresh orange juice, we were energized for our climb. We hadnât really done any strenuous hiking since the pass, but that was going to change today. We were at 4,580 ft and had to climb to 9,075 ft in two days.

The trail to Ghorepani took us back among the rice fields and functioning villages â a welcome site. The villages before this at higher altitudes seemed to mainly exist for the circuit trekkers, but the villages we walked thru today were farming villages full of kids and families who lived there year around. Kids along the trail sold sweet green oranges bursting with flavor; I of course put a few in my pack.

After a good morning hike we stopped for Daal Bhat and corn bread. As we were getting up to leave, an old friend âfloatedâ by â Roman. We had been meeting and leaving Roman for the past 4 days on the trail; each time thinking it would be our last to see each other. The âriverâ of the Annapurna Circuit never ceased to amaze me â depositing friends floating down the âriverâ when you least expected it. Roman trekked with us to Shikha where we were to stay for the night. We said our final goodbyes as he headed for the big climb to Ghorepani and dad and I settled down for a relaxing night in Shikha. 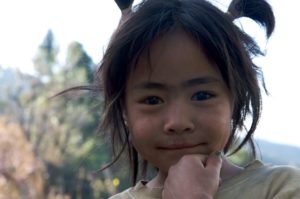 Model in the Making

Shikha wasnât exactly a normal stop on the trail; they had a few guest houses. Shikha was mainly a functioning village full of farmers and herders. It was great to be back in a non-touristy village. We spend our afternoon walking around the village watching the villagers go about their afternoon chores; thrashing beans, feeding goats, milking cows, and making baskets. Of course the kids came running down home from school and offered a wealth of entertainment for us posing as âmodelsâ.

The next morning we knew we had a challenging climb to Ghorepani, so we ate a hearty breakfast of porridge and started the climb. We walked with kids on their way to school; brothers and sisters walking in cheap flip flops hand in hand bounding up the steep mountain to go to primary school; a typical day for them as we were gasping for air. It was fun however to see the hillside come to life in the golden morning sun. Villagers were out harvesting their hillside crops; serenading us as we walked by.

As we walked up a seemingly never-ending array of stone steps, various parts of my body cried out in exhaustion. Strangely my whole body seemed to be itching too. I tried to ignore it and get into a hiking rhythm. I was able to get a second wind and decided I would speed up a bit and take fewer breaks; mainly because I wanted to be done with this day of climbing and those damn steps! I took off and found myself quickly all alone on the trail. I hit my stride and arrived in Ghorepani about 20 minutes ahead of dad, Bishnu and Diehl. It actually felt great to work that hard and sweat profusely; I had earned my cinnamon roll today! 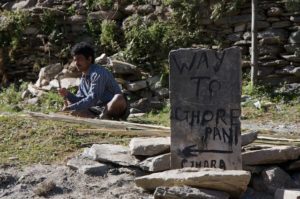 I sat on the wall itchy and hungry waiting for my crew to arrive taking in the lovely views of Ghorepani and dealing with a tinge of sadness knowing this was our last big climb on the circuit.

We checked into an ugly little room; but it came with a hot showerâ¦a real HOT shower. I had been waiting for a good shower for a while now and quickly called dibs for the first shot to use the shower! Unfortunately I thought my itchiness was due to the fact I was wearing the same dirty, sweaty clothes for the last 3 days, but I quickly realized that it was a rash all over my body! Apparently I was having an allergic reaction to the antibiotics I had been taking since falling ill in Manang . The saga never ends. I took some allergy pills and put on lose fitting, clean clothes and tried to ignore the itchiness.

Sadly, Ghorepani was a disappointment. Maybe I had too high of expectations (which is usually the case) since I had to work so hard to get to the mountaintop town. I was disappointed because it appeared to be just another tourist town; cold and thrown together like a bunch of legos. No real locals lived here, but they came here to work at guest houses for the tourist season. Two men dressed in ethnic garb, stood in the town âcenterâ with violins and played the same exact tune for 4 hours for tourists in hopes of donations. Dad and I sat and watched as ânewbie touristsâ were enthralled by the singing and dancing and then were hit up for money. It felt as if we didnât belong here with the rest of the tourists; as if we had been banished to the âkiddie poolâ after swimming in the deep end. It just wasnât exciting or authentic as the past days going over the pass. Letâs face it â we were old timers existing on the trail for 19 days, and here was the new batch of rookies coming all wide-eyed and fresh. The little town tried to be charming by painting all of the metal buildings and roofs blue; but it all fell gravely short if you ask me. It really existed, in all of its blueness for tourists; mainly the ones who came from Pokhara and wanted to hike to Poon Hill. 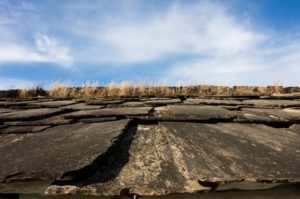 Ghorepani is seen as a nice alternative for tourists who donât want to do the whole Annapurna circuit, but want to do a short hike with views of the peaks. It is a short day or two-day hike from the big tourist town of Pokhara. Many groups came to Ghorepani to see the sun rise at Poon Hill viewpoint, and then hike back down. In order to see the sunrise, you need to get up at 4:30 AM to trek up 1.500 ft. to the viewpoint and see the sunrise on a clear day. Dad and I talked about it, but decided that we would skip the early rise trek. This was mainly because we felt like we had already been to the Super Bowlâ¦Thorung La Pass; we were among the peaks that the others were vying to get a photo of. For some reason it didnât appeal to us.

Instead us two old-timers had a celebratory beer and cinnamon roll happy we had finished our last major climb. It would be all downhill from here!