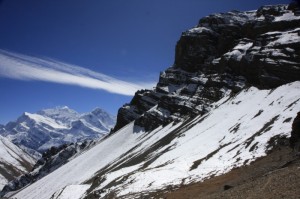 We saw the first glimpse of them from the plane window â the rigid, snowy Himalayan peaks. They were practically at eye level with our cruising altitude; you could reach out and touch them as if they were the pages of a book. They looked beautiful and scary at the same time. They were so cold, hard, and barren; as if they were saying âleave us alone, you donât belong here.â Yet at the same time they were the fascinating peaks I had studied as a child, topped with snow that looked like an inviting dollop of Cool Whip.

It was a bit surreal; all of my planning was becoming a reality. As my dad excitedly peered out the window at the daunting peaks I asked him if he ever thought heâd see the Himalayas in his lifetime. He thought about it a bit and said âNo. I donât think I ever thought about it before. Iâm sure I learned about Nepal as a kid, but I never thought beyond that I suppose.â Iâm pretty sure at his elementary school, which was a one room school house in the Nebraska countryside, no one ever thought theyâd see the Himalayas. It was a marvelous feeling to know I was helping someone achieve goals they never knew existed; isnât it wonderful when we push beyond our boundaries of possibility?

If I had been traveling solo as I normally do, I would have simply bought my flight ticket, arrived in Kathmandu, and then figured out the rest of the itinerary in a spontaneous manner. This lack of planning is the âbadgeâ of a backpacker â carefree, go where the wind takes you attitude that comes from a fat passport. However I wasnât a typical backpacker this trip; I was a daughter traveling with her father, and I knew I couldnât be that blasÃ©; I needed a plan prior to arriving. 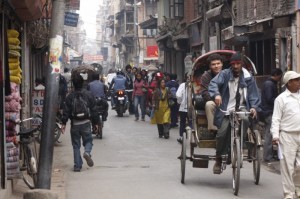 The busy streets of Kathmandu

Thamel is the backpacker/tourist area of Kathmandu. It is loud, chaotic, dirty, and positively terrifying when you step off the plane from a cushy westernized country. There are plenty of people in Thamel who want to be your âfriendâ; it can often be a daunting experience as everyone tries to sell you some tour, gift, or drugs â you have no idea who to trust. However when I volunteered in Nepal a year ago, I was able to form relationships with some great people whom I trusted; Giri was one of them. He was the younger brother of my past volunteer host, Didi. When I volunteered in the village of Puma, I stayed with Didi and her mother Ama. Whenever we had trouble communicating (which was often), Didi would get her cell phone and call her brother Giri and have him translate for us. Thatâs right â there was no indoor plumbing, and sporadic electricity â but thereâs always a cell phone not more then a few feet away! The last time I was in Kathmandu I met my cell phone translator in person and we formed a friendship and kept in touch over the last year while I was in Vietnam. Giri runs a travel company in Thamel so he was perfect to arrange our trip for us. 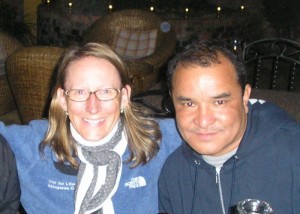 I had been working with Giri for the past couple of months putting together transportation and lodging for my father and me, as well as to find us an experienced guide and porter. This is where I became rather high maintenance â finding a guide. I needed to make sure that we had someone with experience, knew about altitude sickness, was mature and responsible and most importantly â a guide who was willing to take a 73 yr old over the Thorong La Pass.

The afternoon we arrived in Thamel, we met our guide, Bishnu; he was a perfect fit. Mature, good English and many successful trips over the pass. Plus, he seemed to be social and have a really great sense of humor â something necessary if you are going to travel with someone for 21 days! Everything was set in motion and weâd be leaving the next morning for Lamjung district where the Annapurna circuit begins.

With the help of Giri and Bishnu, we laid out a loose trekking plan. For most people, the Annapurna circuit will take about 16 to 18 days to complete; we knew we werenât most people. None of us (including himself) were really sure how well dad would adapt to the hiking conditions, so we decided to not be in a hurry and practice the concept of slow travel. Weâd take our time, enjoy the trek, and give ourselves 21 days to finish the circuit. Prior to this the longest trek I had ever been on was 8 days at Kilimanjaro â this was the big leagues.

We laid out the following loose itinerary which included approximately 5 to 8 hours of trekking a day depending on our speed, with altitude changes of about 1,000 to 3,000 feet a day.

Start at the beginning of the Tiger Balm Tales:
Vol. 1 – The Begining of a Nepal Trekking Plan
Vol. 2 – Preparing the Parents