On the 7th day, we rested â Annapurna Circuit

And on the 7th day, we rested.

I woke up in Manang; I didnât have to roll up my sleeping bag, repack my backpack, tend to my blisters, or put on my dingy hiking clothes. No, this morning we rested. I lay in my bed listening to the heavy hiking boots on the wooden floor outside my door â clomping back and forth getting ready to depart. You could feel that nervous energy that exists in the mornings as people get ready to depart yet again; however this morning I dozed in and out of sleep feeling happy. I am still today. 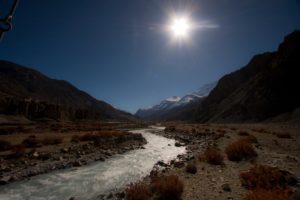 Traditionally Manang, at aprox. 11,000 ft, is the resting spot for the Annapurna hikers. You donât necessarily rest here because you are tired, you rest here to let your body try to acclimate to the altitude; to slow down and let it try to adjust and fight off the ill effects of Acute Mountain Sickness (AMS).

The village of Manang was different than the other villages we had been through. It was designed for rest. There were little shops showing movies at night, bakeries and coffee shops, laundry âfacilitiesâ and tons of trekking supply shops. This was the last real âlivableâ village before we reached Thorong La pass and descended into Muktinath; which would be 4 days from now.

Even though this was a rest day, as part of acclimization people were strongly encouraged to do a day hike. Trekkers were advised to hike up a few thousand feet and then come back down to sleep again in Manang thereby practicing the altitude aclimization theory of hike high, sleep low. We weighed out our hiking options and decided to do a hike up to see the glacier â a 1500 ft. climb. The best part about the day hike is that I didnât have to wear my backpack. I took my camera and felt light as a feather. 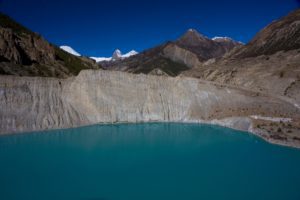 The climb to the glacier was tough as it was steeper than our normal trail and the air was thin, but it rewarded us with spectacular views of ice blue glacier lakes and golden valleys. When we reached the viewing area near the foot of the glacier, we sat and strategized our hiking plan with Bishnu for the next few days. We had already made it further than I thought we would considering our rough start on day 1 and 2, so we were pretty happy to even be at this point. My dad was feeling good and had greatly improved his trekking balance, speed, and confidence since the first few days. His only concern was the diminishing oxygen and the fear of altitude sickness as we tried to get to cross the pass at 17,770 ft.

Once back in Manang we picked up our laundered clothes and celebrated our progress with one of the Annapurna circuitâs delicacies; cinnamon rolls. I have no idea how the cinnamon roll sensation started, but I was thankful that someone had brought fluffy bread with butter, sugar, and cinnamon to the Himalayas! From the village of Manang, all along the trail there would be places selling big cinnamon rolls âa complete guilt free snack for energetic long term trekkers. When else would I ever be able to eat a cinnamon roll a day â only when you are trekking day after day expending the energy to negate them. I felt like I had landed on another planet; one where calories were non-existent! 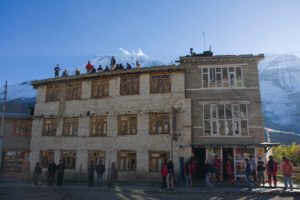 With our rest day coming to an end, Manang had one more surprise for us â nighttime entertainment. Word traveled around the village about a horse race, and the locals were starting to line up along the main drag, a long stretch of dirt âroadâ sort of like a rectangular town square. You could hear the bells in the distance and soon a group of local boys and men rode in on miniature horses and down the âroadâ. The small horses decorated in bells and blankets with grown men riding them made the whole scene seem a bit cartoonish.

They paraded past and turned around at the end of the road. All of a sudden with no warning the riders took off at full speed down the road. The crowd roared, the bells clanged and Manang came alive. This back and forth racing kept going for about 40 minutes. It was Nepalâs version of 1950âs drag racing down main street. There were no real winners or losers; instead it seemed to be a series of small drag races back and forth. Sometimes the riders would be riding so wildly theyâd lose control of the horses and they run off towards the crowd of onlookers. Yet we continued to watch in amazement. 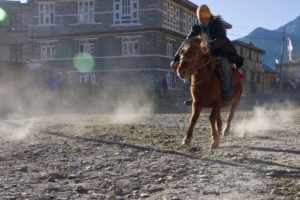 I watched the horses as much as I watched the locals spectating; you could tell that this event, no matter how absurd is seemed to me, was well loved in the village. Occasionally a herd of goats would also parade down the road stopping the whole race for a bit until the locals shooâd them off to safety. The whole crowd, locals and tourists, would erupt in laughter.

By resting in Manage, we also had a chance to socialize with other tourists; we bonded over beers, itineraries, blisters, fears, and the crazy horse race. This was the beginning of many trekking friendships for my father and me. My favorite thing about resting in Manang was the fact that we actually had a chance to sit, relax and take in the village and trekking culture that we had been passing by every day.

I fell asleep that night feeling a bit uneasy about what was to come, but thrilled with how far we had made it already!

Want to read the Tiger Balm Tales from the beginning?
Vol. 1 – The Begining of a Nepal Trekking Plan
Vol. 2 – Preparing the Parents
Vol. 3 – Annapurna Itinerary
Vol. 4 – Travel Back in Time
Vol. 5 – Breathe Through Your Mouth
Vol. 6 – Road Work Ahead
Vol. 7 – Changing Rhythms on the Annapurna Circuit

8 Responses to "On the 7th day, we rested â Annapurna Circuit"