No Room at the Inns â Annapurna Circuit 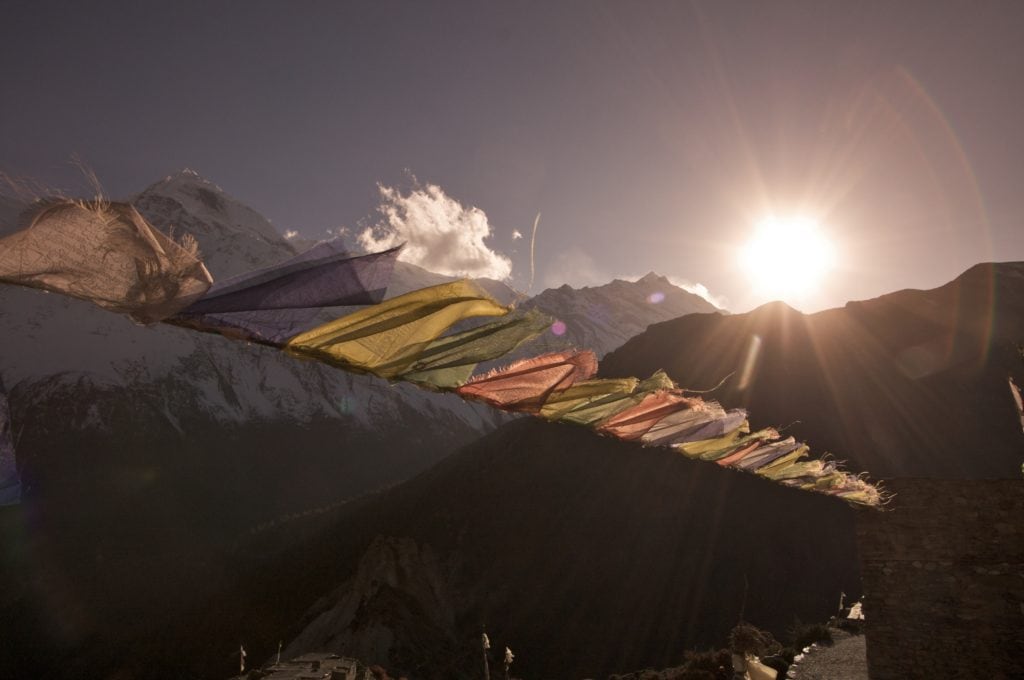 A swift wind blows the prayers...

By some miracle I woke up on Day 9 with a small trace of a headache, aches, and pains of the day before. Apparently 24 hours of sleep and antibiotics were just what the doctor ordered. I woke up feeling about 80% well; a miracle considering my paralysis the day before. 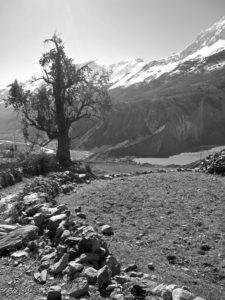 Considering I was unable to get out of my bed the day before, let alone walk; we decided to revise our trekking schedule. While being sidelined in Manang we learned that this was the high time to trek the circuit; the circuit was at capacity and guest houses were filling up fast. This was bad news for people who were slow trekkers (us!) as we kept hearing more and more stories of people not being able to find rooms to sleep in. This âJoseph and Maryâ predicament left people sleeping slumber party style on the dining room floors of inns. This was even more concerning since there were fewer and fewer inns to stay at as we moved closer upwards towards the pass. Prior to this, little villages dotted the trail and if you couldnât find lodging, you simply walked another 20 minutes to the next village. However after Manang there were no more villages, just clusters of guest houses spaced out about 3 hours apart.

We decided to try to circumvent the âno room at the innâ situation by going a shorter distance and also trying to send Diehl, our porter, ahead to secure a room for us. We hiked up out of the valley of Manang, crossing into a landscape void of trees. Suddenly the mountainsides took on a bleak, cold look to them. No more pine trees, instead there was just bare, rocky mountains. The white peaks were getting closer and closer and the air thinner.

I moved slowly, but felt stronger as the day went on and the antibiotics worked their way through my body. We hiked for a short 2 hours and stopped at a small encampment, Gunsang, which was the home to 2 guest houses with amazing views. Most people donât stop in Gunsang since itâs so close to Manang. However, by skipping Gunsang they missed one of the best guest house views on the circuit. 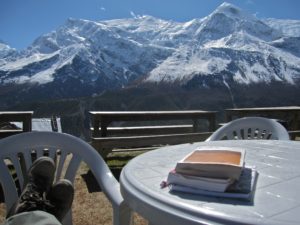 Room with a View - Gunsang

After dropping our bags in our guest room, I went out to the ‘patio’ tables, propped up my feet and simply took in the spectacular view letting the sun beat down on me. You could easily imagine how much closer you were to the sun; the rays were powerful and warming, yet I was surrounded by snow. Some people like beaches, but Iâm not one of them. Give me this view and relaxing atmosphere any dayâ¦bliss.

Guest houses along the circuit are an exercise in simplicity; in many cases they are a small step up from a tent. For $6 you can rent a room with two beds plus you must promise to eat your meals at their dining room. Typically the rooms had two little wooden beds with a pad on it, a questionable pillow, and if you were lucky you had a little wooden table to set some things on. Most of the beds and tables looked as if I had constructed them; just simple blocks of wood and some nails. Some of the guest houses were more sturdy than others. The worst ones were made of thin boards leaving the wind to whistle through the little room making it feel more like a refrigerator than a room to sleep in. The electricity was sporadic at best and normally consisted of one little light bulb sputtering out light trying to illuminate the room. 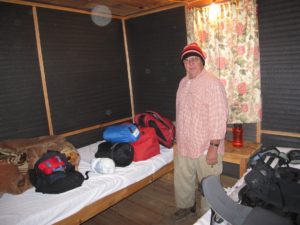 The sparse conditions didnât matter too much to us as we never really spent much time in the room due to the cold temperatures. Instead each guest house had a dining area which normally contained some sort of stove where all the guests huddled around at night to soak up the warmth. This is also where most of the socializing took place. Guides and tourists would mingle and play cards, swap travel stories and drink Roxie. The closer we got to Thorong La Pass you could feel the tension in the air in the group dining rooms; people worried more and more about crossing the pass.

The bathrooms were normally a shared outhouse with a squat toilet, cement floor, a bucket to put water in, and sometimes a âshowerâ. However before you get grandiose visions of shower heads and curtainsâ¦think again. A shower normally consisted of a faucet head situated about a foot above my head; you literally stood underneath a faucet. I normally found it easier to simply fill the bucket with water and take bucket showers. If you were lucky, youâd get some luke warm water to dispense from that faucet. The hottest water that would come out was still rather chilly in my standards thereby necessitating us to hone our abilities at taking very fast showers! 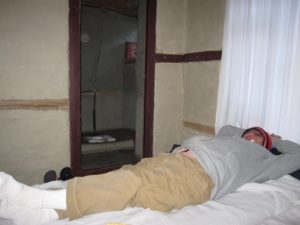 Our deluxe room with ensuite toilet

Our current guest house in Gunsang had no electricity, but it did have personality. In fact, this was the first guest house we stayed in which offered an âen-suiteâ toilet. I was pretty excited about the prospect of not having to get up, put on my down coat and boots to go outside to the outhouse! When I entered our little guest room, sure enough we had our own little bathroom, but quickly my visions of a typical bathroom were dashed. In my excitement, I had allowed myself to forget that I was in Nepal, and therefore was dreaming of a toilet, sink and towels. However what greeted me was a simple outhouse (cement floor and squat toilet) attached to our room; a little less glamorous than my mindâs picture. Regardless, it was next to our bed â and that was great.

In fact my highlight came the next morning when I woke up and was going through my morning ritual to get ready to hike. Instead of having to go outside and brush my teeth, I was able to go into our en-suite toilet in my pajamas to brush my teeth in privacy. However apparently I was a little too excited about this. When I put my toothpaste on my toothbrush and was trying to put the lid back on the paste, I lost my balance and dropped the toothpaste. I watched as it fell in slow motion, bounced on the porcelain of the squat toilet and then down the toilet into the abyss â kerplunk! âShhhiiiitttttâ I yelled! My dad asked what happened. I popped my head out of our lovely en-suite bathroom and said, âI have some bad newsâ¦â

There would be no place to purchase toothpaste for the next 3 days. We would have to rely on gum. I wondered how long it would take the earth to break down a tube of toothpaste in the âsewerââ¦probably longer than my lifetime. Not very âgreen of meââ¦but it was an accident!

Regardless of the toothpaste mishap, this little guesthouse in Gunsang was my favorite along the whole trail. The family who ran the guesthouse during the trekking season had an abundance of smiles to offer and their diligence in keeping the place clean and inviting was inspiring. I was actually a bit sad to leave their hospitable environment, knowing that our future trekking and lodging was uncertain as we continued to climb.

One thing I knew for sure was our future held less warmth, and less oxygen; but we would keep trudging slowly upward.
Photos from Day 9 – View all:

Want to read the Tiger Balm Tales from the beginning?
Vol. 1 – The Begining of a Nepal Trekking Plan
Vol. 2 – Preparing the Parents
Vol. 3 – Annapurna Itinerary
Vol. 4 – Travel Back in Time
Vol. 5 – Breathe Through Your Mouth
Vol. 6 – Road Work Ahead
Vol. 7 – Changing Rhythms on the Annapurna Circuit
Vol. 8 – And on the 7th Day We Rested
Vol. 9 – Paralyzed on the Annapurna Circuit

12 Responses to "No Room at the Inns â Annapurna Circuit"