The Primary School surrounded by mountains

To see snapshots of the school and the kids – click here! (opens new window)

The whole reason I came to Nepal was to volunteer and teach. In some way I was trying to recapture my rewarding experience that I had in Delhi last year I suppose. When I arrived however, I quickly realized that the teaching was a bit secondary to my culture shock that I was experiencing. Considering my new living environment in Puma, teaching was really the least of my concerns. I think I was so caught up in my own fears that I didnât really put a lot of effort into worrying about teaching the children. That doesnât mean that I didnât put a lot of planning and thought into it, I certainly spent hours on the porch planning my lessons for each class the next day, but the teaching seemed secondary to me for some reason. I fell into a good groove with the teaching and it was very rewarding. A typical school day went something like thisâ¦ 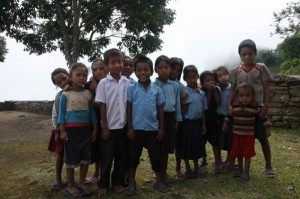 The kids awaiting for me to arrive

I go to school at 10am, and as soon as I start getting close to the little school high on the hill, I hear it. It is faint at first, but gains volume with each muddy step I take past the buffalos.
âMissâ¦.Missâ¦â
âNamaste Missâ
âMiss, Miss, Goohd Moating!â
The kids gather in the yard and eagerly awaited my arrival. Thereâs a part of me that simply thinks they like watching me try to navigate my way through the steep rocks, the buffalos, the buffalo shit and the mud. Today, one of the boys came to my rescue and âshooâdâ the buffalo out of my path as I was a bit scared to walk by a buffalo that was staring me down; thatâs not an everyday occurrence for me and simply telling them to go away doesnât quite work.

After greeting all of the kids with Namasteâs and âHow are you?â, I take a seat inside with the teachers for about 20 minutes and I ask the principle what periods I can teach that day. Today he surprised me and said âNo teach today.â
âWhat? No teach?â I reply a bit dazed and confused
âYes, no teach.â He repeats
I look at him with a puzzled look wondering if Iâve done something wrong or if I just am misunderstanding him which is the typical situation
He takes the Nepali calendar (which is lunar) off the wall and points to a day on the calendar which I cannot read and says, âThis todayâ then he moves his finger to some fine print in Nepalese script on todayâs date and says âtoday for gamesâ.
âGame day? What is that?â I reply in a surprised manner wondering if Bob Barker was going to show up with his prize wheel.

Only the boys showed up during Teej

As a side note, I really shouldnât be surprised at all about game day. Since Iâve been here there have been 2 holidays and now one game day â this is all in the course of 1 Â½ wks. It seems to me there is not a ton of school going on. The two holidays were special festivals for womenâ¦sounds greatâ¦right? Not so much. As I inquired more and more about Teej, I learned that it was a holiday celebrating women, but it was less of a holiday that celebrated women, and more of a holiday that celebrated womenâs commitment to men. Red flag! What? I had to pause and try to put my western views aside; I tried to bite my lip as I inquired more about this subservient festival. Apparently, no on worked or went to school that day and instead the women dressed in red and visited the temple making offerings to the various Gods (sorry, there are really too many for me to keep up with the specifics), and the women fasted all day. Call me crazy, but fasting doesnât sound like any type of holiday to me. These acts were to show the womenâs devotion to their husbands and brothers. Two days after the fasting, the women once again had to go to temple and fast in the morning. This Theet Part II took me by surprise when only the boys showed up to school. The principal was once again left trying to explain why I wasnât teaching that day. Instead of coming to school the women in the village did chores, cut buffalo grass, fetched water, watched the buffalo/goats, worked in the rice fields, etc.
Here’s a bit more official description:

“Teej” is the fasting festival for women. It takes place in August or early September. The festival is a three-day long celebration that combines sumptuous feasts as well as rigid fasting. Through this religious fasting, hindu women pray for marital bliss, well being of their spouse and children and purification of their own body and soul

When we did have class, I typically taught for an hour for each class. There were three classes of children; age 6/7, age 8/9, and age 10. Each were at different level of English, which basically meant the 10 yr olds knew more vocabulary than the younger kids and they could read the Roman letters better. The youngest kids really had to start at square one and we focused on colors, drawing, songs, and body parts.

I had to be rather inventive as the classrooms were bare; and the kids had minimal supplies (sometimes a pencil and paper). The only items in the classrooms were an old chalkboard with pieces of chalk that were no larger than Â½ inch in length. I learned quickly that the teaching periods were very, very lose; nothing was very structured at all â at least in my western eyes there wasnât a lot of structure.

The game of Cat and Rat!

Game day turned out to be a lot of fun. They taught me Nepalese songs about buffalos and rice fields. There was even a song about some man who was divorcing his wife, yet Iâm a bit suspicious that I might have misunderstood the translation of that one! After the singing, we started to play organized games. First we played musical chairsâ¦.yet I looked around in confusion as there were no chairs. Soon the children were all running around gathering big stones; the substitute for chairs. Now the next hurdle was musicâ¦thereâs no electricity at the school, so I wasnât quite sure how they were accomplishing the musical part â but they brought out a drum and someone pounded on the drum as we all went around from rock to rock in a circle. I didnât fare too well in the game as Iâm not very good at running in flip flops whilst the kids were very adept to running in their bare feet â I didnât stand a chance!

See video of the kids singing Nepalese songs for me – this one is about water I think!

The next game I had a chance at winning because it was in English! The principle drew a big circle in the dirt with a stick and we all gathered around it and played In/Out. The principle would say âinâ or âout and we would follow the instructions jumping in and out of the circle. Eventually he would trick someone and they would be out of the game. I stayed in the game until the last 5 kids and was eliminated; maybe I would have done better if it was in Nepalese. My lack of conversation in Puma has obviously impaired my English!

See video of the kids playing a game of tag!

Finally they played a game called Cat and Rat. I loved the fact that they used the term rat instead mouse. It was a type of tag and I sat that one out as I had more fun taking pictures of it! I taught them how to play hopscotch and the Hokie Pokieâ¦in which they all stood there and stared at me at first as I âshook it all aboutâ..but eventually joined in! Thank god as I was feeling rather silly! The principle handed out prizes and the kids went home early that day. 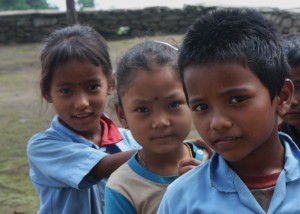 How can you resist these faces?!

I stayed around and talked to the teachers for a while. The main teachers room was full of stacks and stacks of books that had been donated from World Vision and other organizations. I asked the principle what they were going to do with the books and he referred to putting them in the library.
âWhat, thereâs a library?â I remarked
He got a key and took me to the room next door and showed me a newly painted room in red, blue, green and yellow. He told me that this is to be the library. I was rather impressed and asked him where all of the furniture was and when it will be completed. He explained that the shelving, tables, and remaining items were down in Besisharha and that they didnât not have the funds yet to bring the remaining furniture up to Puma via Jeep. I asked him how expensive it was to have the Jeep bring up the furniture and he said that is was 2,000 Rupees ($30 US ).

I went back to Didiâs that night and thought a bit about the stacks of books and the unfinished library. After living in Puma for 1 Â½ weeks, I was a bit disappointed that I didnât get as much time as I would like to actually teach the children due to festival schedule, game days, and trips to other villages. I counted up my Rupees and decided that I would provide the funding to get the last load of library equipment to the school. I felt like it was a way to provide more help considering I hadnât done as much teaching as I originally thought I would. It doesnât take long for the kids and the people of Puma to occupy a piece of your heart in this environment, and I wanted to provide as much as I could for them.

It seemed like the logical thing to do. After all, $30 is 3 mixed drinks in NYC and giving these kids access to books is much more important to me than martinis!

One Response to "School Days"