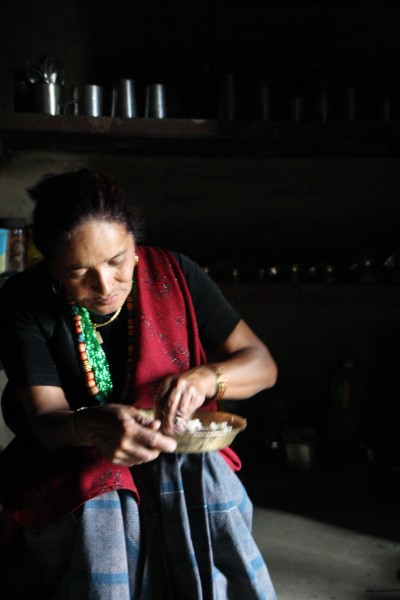 Didi eating with her hands

During a break at school one afternoon, I noticed a big crowd in the village. I asked the children what was going on and they said âbuffalo killâ. The village was slaughtering a buffalo and from my vantage point it looked like a lot of work as they were hacking away at various parts with an ax and knives. Had I known this earlier I would have grabbed my camera; but I missed the opportunity because I was teaching.Â That night while we were eating Didi asked me âDo you meat?â It took me a while to figure out what she was trying to ask out of these cryptic words as I didnât have the luxury of spelling the word âmeatâ/âmeetâ â then I finally realized that she wanted to know if I was a vegetarian or not. In my excitement of finally understanding the question, I quickly said , âYes, I love meat!â 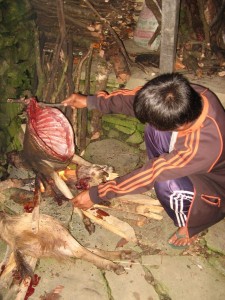 Butchering a goat - to be used for the whole village - including me.

As soon as the words came out of my mouth I knew I was in trouble. Now I love a good burger, steak , or pork chop; but thatâs not what you get when you order meat in Asiaâ¦you get all of the parts that we generally discardâ¦mixed in with bone and fat. Crap, I knew that I had now set myself up for having to eat meat; a luxury for village life in Puma; a luxury that would be extremely rude to pass up. Sure enough the next week I had different people from the village bringing me various slaughtered animal parts. Joy.

Nepalese food and eating habits really were quite fascinating to me. The staple food is dhal bhat; boiled white rice and beans/gravy poured over the top. Generally there would be some sort of vegetable that they would put on the side. Iâm not exaggerating when I say â they ate this same meal EVERYDAY. There really wasnât a variation to it, the same boiled rice and beans served at 9AM and around 7PM; only two meals a day. They would normally have a tea time around 3PM with some type of snack accompaniment. The snack consisted of biscuits (cookies to you and me) if you were well off or roasted corn on the cob. The corn was particularly good; cooked over an open flame and then you pulled the kernels off and ate them like nuts. On a special occasion Didi made me popcorn! I was so excited the first time I heard the popcorn sound coming from the kitchen, I leapt up to go see here popping corn in a frying pan with a lid over itâ¦the original Jiffy Pop. Occasionally I would get one other snack variation, fried dough. Well, at least I thought it was dough until I watched Didi make it and then realized that it was rice mixed with a little sugar and pounded into a pulp and then deep fried. I never knew rice could be used in so many ways. 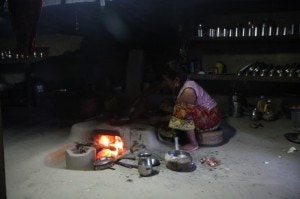 Cooking in a Napalese kitchen

I observed the Nepalese eat, and I was enthralled. For being such a laid back culture, they eat with passion; which is a nice way of say it was barbaric! Utensils are not used; instead your fork, spoon, and knife is your hand. Didi always had a spoon for me which I was thankful for as I couldnât imagine picking up the heaping handfuls of hot rice and beans with my fingers. The Nepalese ate as if it were a race and they were trying to win a gold medal. Iâve never seen people eat a 4 cups of boiled rice so quickly before. They would slurp it all up and then look at me with my slow little spoon and say, âlazyâ. I had to try to correct that that âslowâ was the appropriate word to use as âlazyâ was a blow to my ego! They would seldom drink with dinner, but after they were done with their platter of rice, they would take a pitcher filled with water and drink directly from the pitcher pouring the water straight down their throat and never touching their lips to the pitcher. I was impressed with this ability as I would have the water all over my chest if I tried that. After the eating frenzy, they would sit back and then proceed to do everything we were taught not to do, belch loudly and spit. All of the âforbiddenâ things that Miss Manners would cringe at were a part of normal Nepalese culture. It took me by surprise at first, but it was completely explainable based on how fast they shoveled food in and the amount of food they would eat at one sitting. 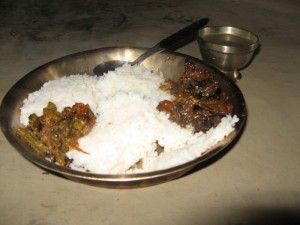 A plate of dhal bhat - the portions were HUGE!

Each night I would always have a pile of rice left over as my stomach couldnât eat 3 cups of boiled rice in a sitting! I always felt terrible leaving any food as food is a precious commodity in Nepal. So when they started bringing me one of their prized possessions, meat, I felt like I had to eat it. We would eat in the kitchen sitting on the floor off of plates that looked like big pie tins. Most of the time it was rather dark in the kitchen as the electricity was off more than it was on in Puma. I sat and stared at my little dish of buffalo meat I realized that this not the meat that I was accustomed to, instead it was a mixture of fatty meat, grissle, stomach and intestine. I had no options of politely refusing, I had to eat it. I gingerly grabbed a piece with my fingers and chewed, and chewed, and chewed, and chewed; trying to be appreciative of the protein that I was giving my body. When I did get the rare piece of eatable meat, it tasted like jerky and was actually quite good; but the jerky pieces were few and far between. The next night it was chicken; as I nibbled on my various chicken parts and feet, I wondered who the lucky person in the village was that was nibbling on the chicken breast!

Didi also treated me to the occasional âNepalese beerâ. Wipe away those visions of a cold, frosty mug of amber colored beer; and replace that with some cloudy, fermented rice at room temperature. However, alcohol is alcohol â and I rarely meet alcohol I donât like. Plus, it helped me sleep through the night without waking up to the rat and buffalo noise!

I also found that different villages had different variations to the standard dhal bhat. When I was in Barbot with the principal, they would milk the cow, then boil the milk, and pour it over the dhal bhat turning it into gruel. However, the variation was welcomed and a little dairy in my body had to be good for me. Prior to this moment, I donât think Iâve ever had fresh milk; I mean really fresh, 5 minutes from milking to drinking. 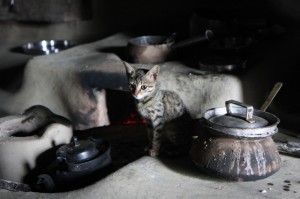 My favorite little kitten loved to sit by the 'stove'

Just as I wondered if I could take one more day of rice. I was treated to one of my favorite meals in the world; rice pudding. The principal and his wife cooked up some of the best rice pudding Iâve ever had; fresh milk, sugar, rice, butter and coconut. The best part was this wasnât desert, it was dinner.

I think the hardest part about eating was realizing that eating wasnât an event as it is for us in the West, instead it was for sustenance. The lack of variety didnât seem to phase the Nepalese. So for two weeks, I changed my perspective on food. I adapted and happily ate my dhal bhat, goat inards, and corn and was thankful to have boiled water and the occasional beer.