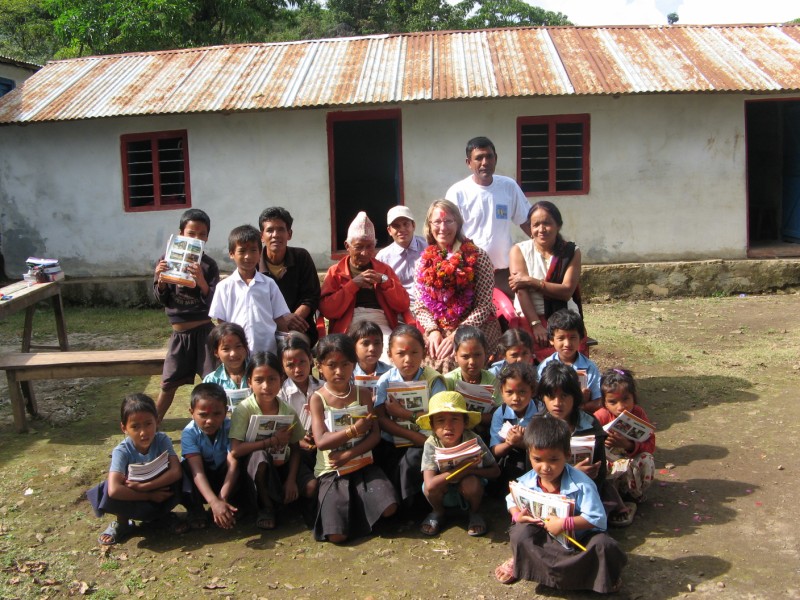 The school, elders, teachers, and children on my last day

To see all of the snapshots of the ‘last day’ activities – click here! (opens new window)

Time is very powerful. In fact, I think itâs the most powerful thing in this universe. Time heals feelings, it causes us to forget, and with time; everything gets better. My time in Puma felt like it moved slowly, especially at first. I agonized about how I would ever survive the two weeks living in conditions that were completely foreign to my mindset. Then time arrived. Over time, I began to accept my new surroundings and even grow to appreciate the hardships and the simplicity. Time made me forget my old expectations and allowed me to set new ones. Because of time, I survived this challenge; as I do all challenges. Now I find that it is time to leave Puma and my little school high on the hill nestled between snow capped mountains; thanks to time, Iâm finding it hard to go.

Today was my last day at the Puma Primary school with my kids that I have come to love. I got up early to try to catch the sunrise on the stoop of the village. I was hoping for an amazing photo opportunity of the sun rising above the mountains, but instead I got a game show. Whatâs behind door #1? However, there were no doors, instead it was big, fluffy clouds and behind them somewhere are magnificent snow covered mountains towering to heights of 20,00 to 24,000 ft. Sometimes Mother Nature would be kind and give me a little glimpse and I would look in awe thinking âthis was here the whole time and I didnât even know it.â I realized that the whole village of Puma is surrounded by these mountains, yet I never saw it with my own eyes; I had to take the localâs words for it.

I went back to the house and had my breakfast snack of popcorn and tea. As I ate the rain started to fall cooling everything off a bit and bringing the leaches. I fantasized about having M&Mâs with the popcorn but was thankful for the popcorn regardless! Despite the rain, I had to head to the local âwatering holeâ and wash my hair. Seemed kind of silly in the rain â but no more silly to me than having to go bath in public with my shorts and tshirt on. As I washed my hair at the water spicket dumping cold water on my head, I suddenly looked up and realized that I was attracting a crowd. 3 young teenage girls sat there and watched me unabashedly. They didnât look away when I caught them staring – they just kept their fixed gaze. Itâs a strange feeling to have people watch you bath, but I had gotten used to it by now. One of the girls even went as far as pointing out some soap I missed when I was rinsing; how very kind of her. 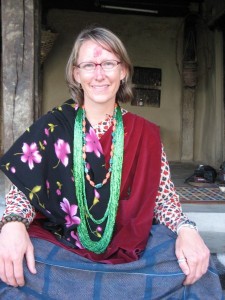 Me in traditional Gurung dress

I arrived back to the house where Didi used me as her American Girl doll; well, actually a Nepalese Girl Doll I suppose. She brought me a lunghi (wrap skirt) that was trimmed in gold and a traditional jacket that had as many ties as a straight jacket. Next came the jewelry â bracelets and a very long green necklace â the traditional outfit for a Kumari woman. Finally, she topped it off with a tilak, a mark of auspiciousness. It is put on the forehead with sandal past, sacred ashes or red tumeric. I had been transformed for my last day of school.

As I walked the school all of the kids stood on the wall and held flowers welcoming me with the chorus of Namasteâs. Yes, I already had that familiar tightening of the throat and tears welling up in my eyes. But it was too early for that; I had to get it under control.

I brought all of my electronics that day â 2 cameras, and my laptop. This was the most electronics that Puma had ever been exposed to. For many of these children, this was the first time they had ever seen a laptop. I put it on the desk and proceeded to show them pictures of my family, my friends, my home, my (former) cat, and pictures of America. They all crowded around, pushing each other to get a glimpse of a world that they had never really seen. They watched the screen magically move through photos with background music; and I watched them. I watched their faces display utter amazement; it was a touching feeling to think that I was exposing them to something that is so normal to most of us. I watched them push, kick and fight their way closer so they could see. Next I showed the photos of them that I had been taking for the past two weeks. They screamed in glee when they saw themselves. The touching thing is that the adults/teachers were just as mesmerized by the children. Today, I had helped the world become a little more global â a good feeling. 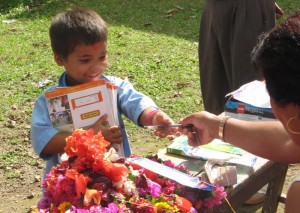 Students receiving their pens and notebooks

After teaching in the morning, the afternoon was left for special festivities. Thanks to the donations of international charities, all of the school children in Puma received a pen and 12 notebooks. This was a big event and the local politicians were even invited to be a part of the ceremony! The various chairmen/women of the village attended the festivities and handed out the notebooks and pens to each child individually as well as provided each one with a tilak. At the end I topped it off with giving each of them a pencil. It was like Christmas morning for these kids, the gifts were enthusiastically received!

Next came the speeches, and of course I had no idea what they were saying, yet every so often I heard my name intermixed. Before I knew it I was directed to sit down and each kid, teacher, and chairman/woman were putting a wreath of flowers around my neck and giving me tilaks thanking me for my stay here. 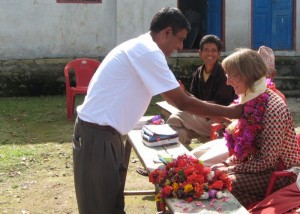 The Principal tying my khata

They asked me to come back and stay longer, but mainly they asked me to never forget Puma. Lord knows thee is no chance of that ever happening! The gratitude was overwhelming for me. With my neck weighted down by flowers, the Principal gave me a a final gift, a khata.Â  Â A khata is a white, silk ceremonial scarf symbolizing goodwill, auspiciousness, and compassion. It is given during special occasions and welcomes and departures. It was a beautiful gesture and the whole thing took me by surprise. The kids sang songs and we all took pictures. I was moved by the outpouring of blessings that I felt and the personal accomplishment of making the absolute best of a challenging situation. 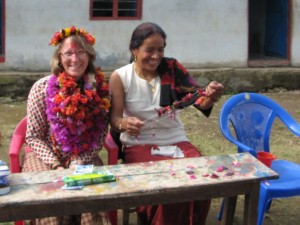 Didi, I, and my massive flowers

The main reason why I was in Nepal was to volunteer and make a cultural connection. Unbeknownst to be this adventure also came with spiders, leaches, and hardship. However it was worth every moment, ever breakdown, every struggle, every charade for the feeling that Iâm feeling now.

After the festivities and pictures, the elders and I went back to Didiâs house where we all sat and had tea and biscuits on the stoop. As Nepalese conversation was all around me, I looked out at my familiar view of green hillside and thought, Iâm sad this is my last night; Iâll miss this magical, remote place.
Dhal Bhat Days