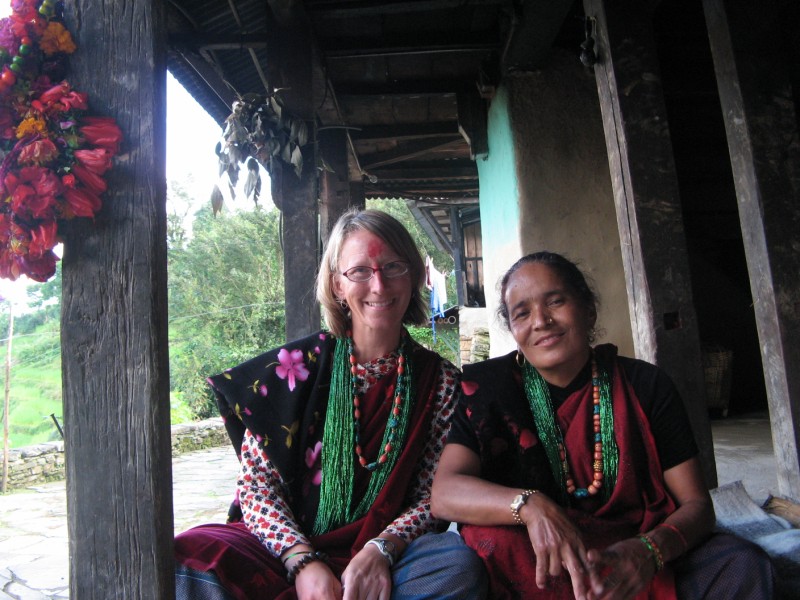 I thought I would be more excited about leaving Puma considering my living conditions for the last two weeks, but surprisingly, I wasnât. In fact, it was a bittersweet. I was excited to get to some sort of civilization (yet I had started to question if civilization actually existed anywhere in Nepal), but I was sad to leave my new friends in Puma. They took excellent care of me in the best way they could. The morning of my departure was filled with tears as we took final pictures, said final goodbyes, and I promised to come back and visit again. Didi and Ama draped me in khatas and insisted that I take the lunghi and Gurung jacket that they dressed me in the day before. I accepted their gifts graciously, but in the back of my head I wished I had something to give them. They had so little material things, and here they were giving some of it to me; it felt wrong. However I knew that the wrong thing to do would be to not accept the gifts, so I took them and plotted how I could repay them in my head.

Naba, the principal, had graciously agreed to accompany me on the 2 hour trek down the mountain into Besisharha and deposit me on the correct bus to Pokhara. I had planned to travel to Pokhara, a 6 hour journey by local bus by myself, to see another part of Nepal. Everyone had told me that Pokhara was a lovely town; clean, good food, proper hotels, all surrounded by a lake and snowcapped mountains. I was cautiously optimistic about this place called Pokhara. I didnât want to get too excited about it as Iâve spent the last 2 weeks resetting my Nepal expectations. However, I have to admit, I was fantasizing about bathing properly! My cautious excitement was overshadowed by the task ahead of me â the journey to Pokhara alone. I didnât really have a choice, but I knew it would be a challenge. Prior to this, I always had someone with me, they didnât always speak English, but they could at least understand what was going when they told us to get off the bus due to mud slides.

The first problem was that I had a big, heavy bag and electronics to haul down the steep, harrowing mountain. I opted to throw money at the problem and hire a porter. For a moment I felt a bit guilty about being lazy and not carrying my own stuff, but when I realized it would only cost me $4 for a porter to carry 60 lbs of luggage, I instead considered it as helping the economy. Seriously, $4â¦thatâs all he wanted. Actually, he wanted $3â¦I gave him $4 and a t-shirt and a coke when we got to the bottom. 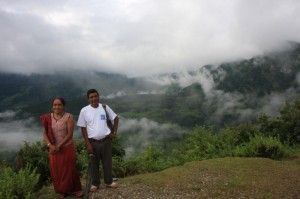 Didi and Naba at the edge of Puma

The principal, Didi and I left Puma together and Didi accompanied me to the edge of the village which made me even sadder to leave her and my âfamilyâ in Puma. Sure, we didnât have long, meaningful conversations, but she took care of me, she fed me, she did her very best to speak to me in broken English, and she was the perfect host; what more could I ask for. She watched and waved as the principal and I took off into the clouds blanketing the mountains in a somber mood, which matched my mood.

We made it to Besisharha and my knees were relieved to reach some flat ground for the first time in two hours. At the market, my porter sat waiting for me (he took a steep shortcut). He smiled through the smoke of his cigarette as he saw me. My ego dropped to the dusty ground as I thought about the fact that I was dripping in sweat and exhausted, while he was about 10 years older than me, had just carried my 60 lbs of luggage down the mountain, beat me there, and had time to smoke a cigarette or two.

Naba husteled me through the town to the bus area. We found that there were no âfastâ mini buses that traveled to Pokhara, instead, my only option was to take a local bus. I guess I was used to this by now, yet that didnât exactly make me happy about it. In fact, the prospect of riding a slow, hot, loud, dirty, crammed bus for 6 hours was enough to make me walk back up the mountain to Didiâs and simply stay in Puma. Then the vision of a bathtub came to mind; I had to get on that bus. Naba and I shared our last Coke and he put me on the right bus making sure that I knew to get off on the last stop. He sat there and watched me until the bus pulled out of sight. We waved and my eyes welled up with tears yet again. He was a good man, a very good man. My safety net was goneâ¦I was now on my own traveling in Nepal.

I had my usual Dramamine and tried to listen to my ipod as the bus shaked and rattled its way slowly down the poor roads stopping every 3 miles to pick someone new up. They would all stare at me at first wondering who the foreigner was. I eventually dozed off. After three hours of gut wrenching, near death driving, we came into a town where we promptly were caught up in a traffic jam; I imagined there was a herd of goats stuck in the road or something. The bus driver decided to turn off the bus and just wait it out. He got out to stretch his legs and other passengers followed to take a bathroom break, or whatever. I wasnât going to move an inchâ¦there was no way I was getting off that bus for fear of not finding it again, not understanding that this was a short stop, not being able to speak to anyone; I had a myriad of good reasons not to get off that busâ¦so I sat there, hot, sweaty, full bladder, and sore from the uncomfortable seat. Yet I was used to this by nowâ¦right?

There was a commotion and the traffic drain was unplugged â things started to move again as everyone hopped back on the bus; except for the man that was sitting next to me for the last three hours. The bus started to move and I looked at his bag sitting in the seat next to me and thoughtâ¦he must have known what he was doingâ¦he/s probably going to catch the bus again in a second. However the bus started speeding up and it was clear â they had left this man behind! I wasnât really sure what to do, but in my best charades, I tried to tell the young conductor boy that this was not my bag and they left someone behind. This came out something like âBag no mine!!â They didnât seem to care too much. Five minutes later and about 10 k later, the bus comes to a screeching halt and the missing man gets back on yelling at the boys running the bus. He had hitchhiked a ride and overtook the bus in order to stop it and get back on…impressive. I looked at him and tried my best to give him the look that said âI tried to tell them, but they wouldnât listenâ. I remained misunderstood.
View a short video of my bumpy bus ride!
The bus lumbered onwards on a slow, sticky, aching path. After traveling for 5 hours, the bus stopped yet again to pick more people up. I was in a bit of an ipod daze, listening to music and trying to let it take me to another place where I wasnât dripping with sweat and feeling nauseous. A young woman stepped on the bus dressed lovely and looked at me with big eyes and mustered up the courage to speak to me. I was intrigued with what was going to come out of her mouth; this is what I heard, âPlease, I prefer windowâ
âWhat?!â That wasnât what I was expecting to hear. In fact it took a second for it to register, she was actually asking me to move from my window seat because she preferred the window seat. At first I was rather excited that she had gotten the confidence to speak to me and use English that I could understand â I was impressed. However, the impressed feeling quickly disappeared when I actually digested what she was asking of me.

Let me get this straight, she wanted me to move from my window seat that I had been sitting in suffering for 5 hours just so that she could have it. Ahhh â let me think about thatâ¦yeahâ¦no fâing way was I moving for this lovely girl just because she could form an English sentence (oopsâ¦maybe Iâm not really cut out for teaching!). I had earned my way into this seat and no one was going to move me. Ok â maybe the heat had gotten to me more than I knew â but she might as well have been asking me to poke my eyeballs out â I was appalled.

My low blood sugar response went something like this, âI prefer window too.â Said with my best New York âdonât mess with meâ stare.
She looked at me with a really hurt, confused expression which made me feel bad for 2 seconds â then she moved towards the back and found a different window seat. International crisis diverted.

Somehow I made it to Pokhara without losing my mind or hurting someone on the bus. Needless to say, I was relieved to be somewhere that sold Diet Cokeâ¦heaven. Didi had provided me with the name of a friend to contact when I arrived in Pokhara that was in the tourism industry. She assured me that he would help me get a room. I took a taxi to his office in the tourist area of Pokhara and he sent me to a guest house that had a queen size bed, air conditioning, a bathub and western toilet â minus any huge spiders. He said heâs give it to me for a deal since I was a friend of Didiâs. $12 a night. I thought about it for about half a second and said â Iâll take it!

That night I had pasta, a cold beer, and gelato for dessert. Thereâs no better feeling than when you come out of a difficult situation and survive to eat gelato again. I stopped at a digital photoshop and dropped off about 100 images to be printed. This was my solution for how I could âgive something backâ to the people that took such good care of me â my photography. 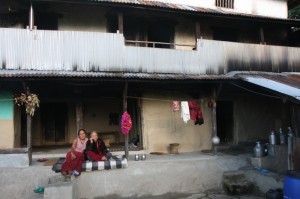 Didi and Ama on the stoop of the house in Puma

That night after one of the longest baths in my life and a much needed leg shaving, I fell asleep, thinking about my friends in Puma. I wondering what Didi, Ama, and my friendly spider Charlotte were doing. Actually â I knew what they were doing â I knew the routine well. The electricity was off as usual and they were cleaning up the dishes from another meal of Dhal Bhat, but tonight, they didnât have to try to speak any English.

5 Responses to "I prefer window"