A Month in Belgium 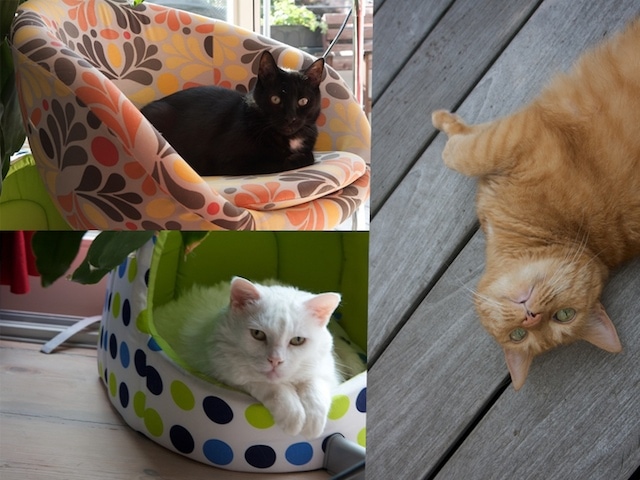 Why did I go to Brussels this summer?

Was it the beer, chocolate, frites or waffles? No. Was it the history? No. The architecture? No.
It was for those 3 furballs aboveâ¦

Briefcase to Backpack just covered how to travel with petsâ¦but I was actually traveling to take care of pets. As you would expect, I donât really need much enticing to get on a plane.

I had never met these cats before â nor the owners, but thanks to a simple Ottsworld post about How to Housesit Around the World â I landed in Belgium this summer. The world is changing, no longer do we require a face to face experience to consider someone a friend or even trustworthy. In this new world of virtual relationships strange things can happen. A simple comment on a post can lead to a plane ticket and an amazing summer of travel!

This comment started a much lengthier exchange of emails between Alison and me culminating in me stepping off the train to Allisonâs warm in-person welcome. Alison, a travel blogger and photographer herself, wasnât what I expectedâ¦she was nicer than I imagined! She lead me through the Central train station to the Brussels metro and into her home. Luckily I was able to spend a day with Alison and Andrew before they left. I feverishly took notes on site-seeing tips, restaurants locations, grocery stores, garbage days, market schedules, and of course got my cat/house-sitting instructions.

Strangely I was having so much fun with Alison and Andrew, I was actually sad to see them go. But they had a plane to catch and I had kitties to take care of; not to mention a lot of exploring I needed to do.

What to do if you have a month in Brussels? 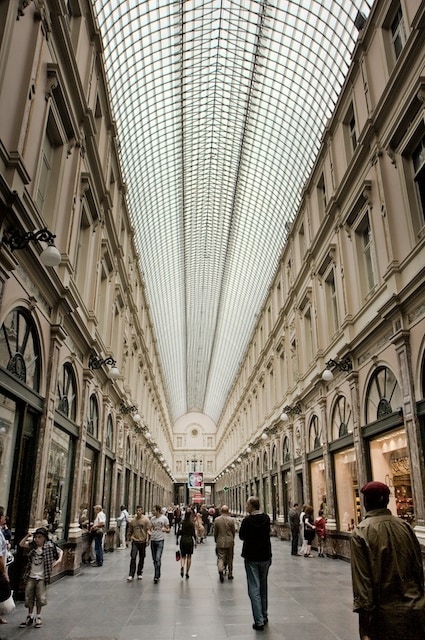 First â figure out transportation and learn how to use the metro â itâs easy and cheap. However the one thing that always amazed me about the metro in Brussels is that it was based on an honor system. You filled your ticket up with money, and then validated it every time you got on the train; however there were no gates or ways to require you to validate itâ¦it was up to you to be honest. If an official came and asked for your validated ticket and you didnât have it validated, then of course there was a fine. But in the month I was there and riding the metro daily â I never once saw an âofficialâ checking tickets.

Of course walking is also a great option as itâs a rather small city to walk around. But, be careful where you step. For some reason Iâll never understand, people donât pick up their dog dooâ¦.why people???!!!! However, I did notice that thanks to the land mines of dog doo on the sidewalk, it created a whole set of jobs for street cleaners (guys who wear heavy duty vacuums on their back and sucked up all the garbage and doo on the sidewalks!)

Iâm not a big fan of heavily touristed areas, but some times you have to wade through the sea of tourists to see a spot. I recommend seeing the Grand Place (the mecca of tourism for Brussels), but go in the early morning and itâs practically empty. I was there by 8AM on a Saturday and had the place to myself. The Grand Place is worth a stop, and at night they even have a light show on the town hall if you like that sort of thing. While I was in Brussels, I was lucky enough to catch the aromatic flower carpet event. Once every two years in August they transform the Grand Place into a work of flower art. That was definitely worth braving the crowds! 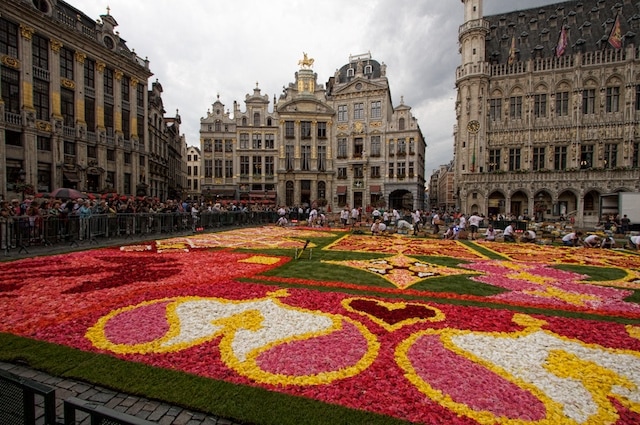 In the name of heavily touristed spots, I would also recommend a stop at the Grand Sablon, the epicenter for chocolate shops, as well as the Galleries. The Queens and Kings Galleries are domed, vaulted arcades, which were built in 1847 as the world’s first covered shopping gallery. 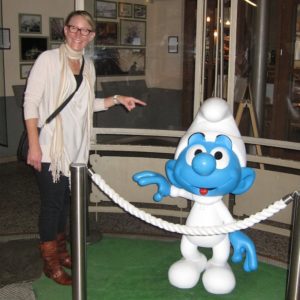 The home of Smurfs

Brussels has MANY museums, and no, I didnât go to all of them. I visited the musical instrument museum which was quite unique as you walked around the museum with headphones and when you came close to an instrument display youâd begin to hear the that instrument in your headphones. It wasnât without some technical difficulties at times, but I liked the idea. Even if you have something against musical instruments, you should still stop by the building as itâs one of the best examples of Art Nouveau architecture in the city.

My friend who grew up in Brussels was intent on taking me to the Comic Strip Museum. I have to admit, I was kinda luke-warm on the idea â I really donât read comics. However once we went and she started to show me around, her enthusiasm for the history of it was infectious. All of a sudden I became interested in how important comics were in Belgium and how the country seemed to be the epicenter of comic art. Then I learned the most surprising thing â the Smurfs came from Belgiumâ¦who knew?! We actually ran out of time at this museum it was so good!

This is my favorite type of exploring in Brusselsâ¦in the local neighborhoods, churches, squares, and markets. I absolutely loved the Sunday Midi Market and went every weekend I was in town. Every neighborhood has a weekly market â so itâs worth it to figure out the schedule as you can always find fresh produce, cheese, meat, clothing, and my personal favorite – yummy Turkish Delight candies.

One of my favorite ways to wander was with the âUse Itâ Map I used it until it about fell apart! It was a nicely illustrated map that identified sites by âtouristâ sites and âlocal secretsâ. This is how I was able to really get past all of the tourist hype and find the real neighborhoods â not to mention the Best Frites in Brussels.

The parks were somewhat small, but there were many. It didnât take me long to figure out a running route to Cinquantenaire Park near the EU buildings. I really liked the area and all of the statues and well kept buildings â they provided great distraction from thinking about running! 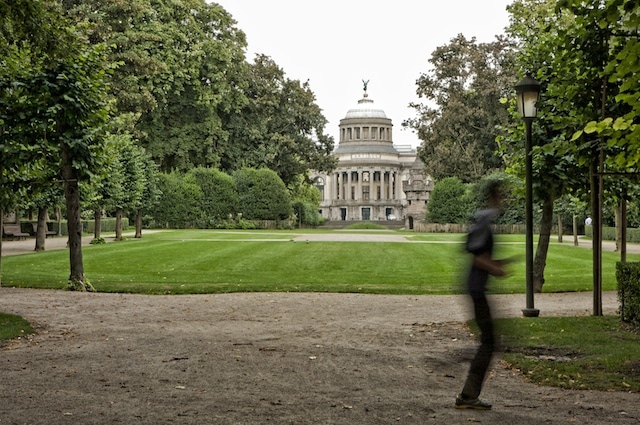 I was also lucky enough to meet locals and they took me all over the city showing off their favorite places with pride! The architecture alone was enough to keep one busy for weeks in Brussels!

The Rest of Belgium

Even though itâs quite a small country â itâs impossible to see it all in one month. However one of my favorite excursions was to Leuven â a small college town with a real authentic feel. Not to mention one of the most ornate Town Halls I saw.

Brugge is also on the list for many people yet it wasnât my favorite place at all. I much preferred the drive a friend and I did out to the Flanders coast to the beach town of Knokke. The drive was a great way to see the countryside, but the beach itself was a surprise too. Granted â we were there on a particularly gloomy day, but you could see what it would be like if the weather were nicerâ¦.packed with people no doubt.

Yes, this is suppose to be about Belgium, but remember, thanks to fast trains you can easily hop to Amsterdam or Paris for a day or weekend get away.

My eternal love goes to this machine…

Even with a month, I ran out of time to do everything I wanted to do in Belgium. I like to have balance in activities and relaxing; therefore some places like Hasselt, Dinant, and Antwerp will have to wait until next time.

I know there will be a next time as I have to get back and see those furry kitties, their wonderfully fun owners, and this great Nespresso coffee machine which became my Holy Grail for a month.

Check out Alisonâs take on our house-sitting âunionâ â Meeting Virtual Friends in the Flesh! Also â stop by and see her amazing Forgotten Postcard Art she sells â a great way to âseeâ Belgium!

If you or someone you know is looking for a house-sitter, please let me know…I will travel for pets and some travel adventure!

10 Responses to "A Month in Belgium"