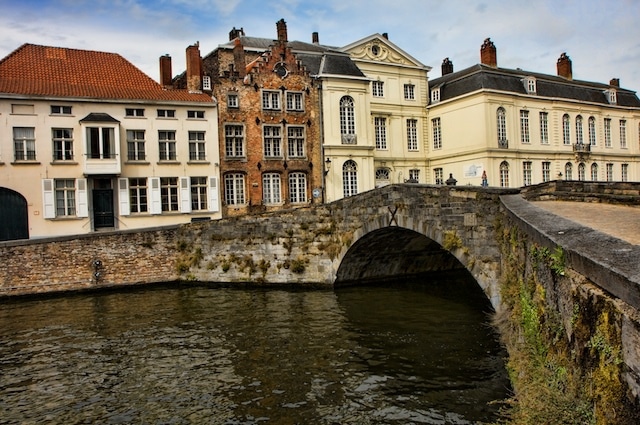 The historic canals of Brugge, Belgium

âYou must go to Brugge.â

âHave you been to Brugge?â

These were the reactions I received after telling people I was spending August in Belgium house-sitting. It seemed that in Belgium, all roads led to Brugge, the little Unesco World Heritage town known for itâs medieval, historic architecture and maze of canals. So when my friend Vera (a fellow ESL Teacher in Vietnam) came to visit me in Brussels, we decided we better follow the advice and see the charming town for ourselves!

A simple 1 hour train ride from Brussels, we were dropped us off at the central station in Brugge on the outskirts of the old town. It felt like there was a mass exodus at the Brugge stop; families and couples spilling out of the train and onto the platform. We all methodically walked out of the train station and straight to the tourist office. I was a bit peeved the tourist office made you pay for a map, but I guess if you have such a popular city, and most people need maps, itâs an easy way to make some money. 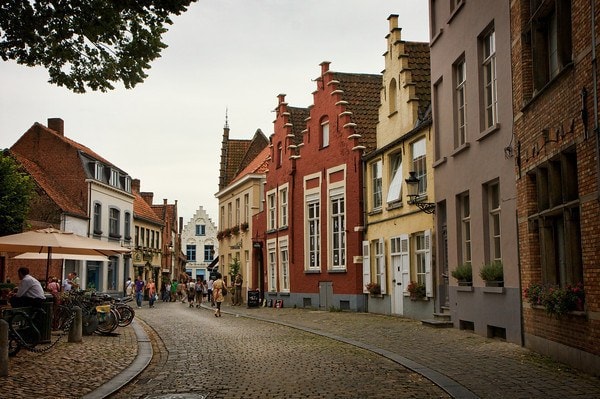 With our map in hand we became oriented and took off on a path into the historic center, along with the rest of the crowd. As we walked down the street, it seemed quiet and peaceful. The architecture leading to the center was simple and we had yet to really reach the canals. We read the map again and found a way to stay off the main roads and take the pedestrian trails deeper into the city.

Soon we heard the sound of horses clomping thru the streets and people magically appeared to be everywhere. The streets were lined with chocolate shops, little cafes, gift shops, lace shops, bars, waffle vendors, and post card stands. Tourists walked around with cameras and lined up to ride canal boats and to eat at nice outdoor cafes. The canal boats were bursting with people buzzing around the canals and under the quaint stone bridges. We took a moment to stop on one of the bridges and watch all of the boats go by, and thatâs when it hit me; it felt like Disneyland. 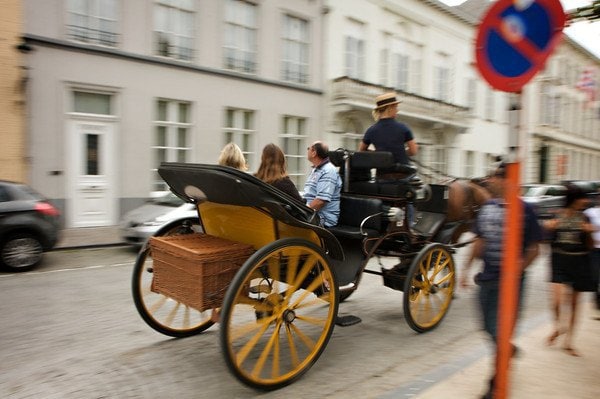 The busy streets filled with horses

I had this weird dÃ©jÃ  vu moment as I stared at the long line of people waiting to get on the canal boat and the families eating at the outdoor cafes. Kids were on sugar highs from waffles and chocolate, and the architecture seemed almost unreal.

We followed the main street towards the Central Square where a cathedral and town hall with tall spires towered over the city as if it were the castle in the Magic Kingdom. The street leading to the Square was bustling with people, buses and horse carriages. It was so full, we barely had a place to walk. We dodged and swerved around people as if it were Penn Station on a Friday at 5PM. We entered the Central Square and were overwhelmed with the amount of people and activity. A music concert took up the main part of the square and the perimeter was filled with quaint outdoor cafes. I seriously looked around to see if Mickey was there somewhere entertaining kids. 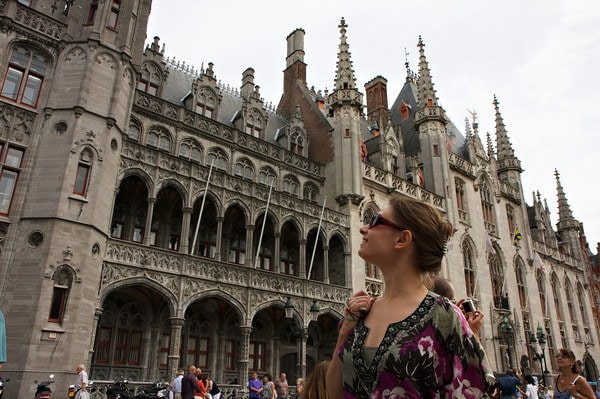 The medieval architecture was stunning, and certainly Brugge had more of it intact than any other city I had been to in Belgium, however I found it hard to really connect with the town. It had been manicured so well for tourism that it felt as if it lost its local identity.

We decided to attempt escaping from the crowds in âTourist Landâ and headed toward âLocal Landâ near the river on the outskirts of the city. It was a long walk but slowly as we took every step further from the center and further from the train station it became quiet and practically empty. Occasionally weâd see someone working on the exterior of their house, or watering flowers, but the noise of horses, boats, and buses were gone.

We arrived at the Northeast outer ring of the city and found two simple cafes, a big grassy knoll and an old windmill. Perfect for the lounging we wanted to do; time for an afternoon nap after our own waffle sugar high died down. I loved this part of Brugge. I watched locals come out with their dogs and interact and was thoroughly entertained by watching all of the bikes peddle by on the well groomed trail which ran along the river. Here is where I really felt the Flemish culture. 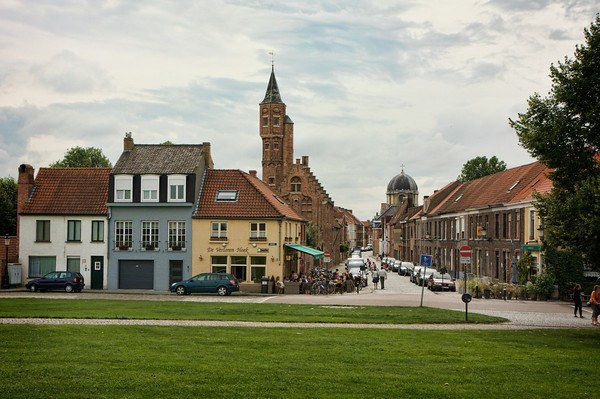 It was getting close to 5PM and we knew that we needed to catch the 6PM train back to Brussels, so we slowly left our grassy knoll and wandered back towards the train station taking the back streets along the eastern side of the old historic town. Once again, it was relatively quiet and we werenât bombarded with the shops or the horse and carriages. Instead we simply enjoyed the architecture and feel of this part of the city. The people of Brugge really do take a lot of pride in their homes as each one seemed pristine and post-card perfect.

As we came closer to the train station soon the buzz of tourists started again. It felt as if we were all doing a mass exodus towards the train station; the âparkâ was closing for the day! Kids were worn out and hanging on their parents, people consulting their maps to ensure they were going the right way to the station. Once again, I had this feeling of exiting the Disneyland park and heading back towards the train station. I wondered to myself â would âItâs a Small World (after all)â be playing at the central Brugge train station?

This Disneyland dÃ©jÃ  vu was only broken when I was able to walk outside of the tourists areas; and when I did, Brugge allowed me to get a peak inside it’s ‘real’ life. The life without makeup. It was wonderful, quiet, simple, and stunning. If you are planning a trip to Brugge, don’t miss out on seeing the real Brugge.

Most of my photography was done outside of the tourists areas as we walked through the quieter neighborhoods:
View Photography of Brugge, Belgium

15 Responses to "Finding the Real Brugge"