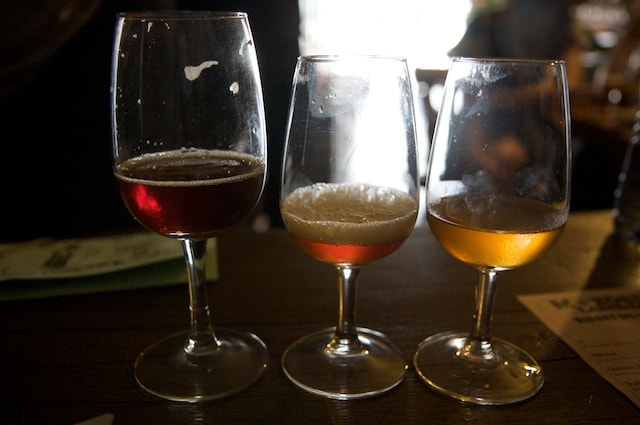 The night before I left for Europe, I went out with my friend Miles to have a beer. We went to a little dive bar on the Upper West Side in NYC, sat at the bar, and each had a pint of Stella Artois. The bill was $7 each plus a $1 tip â $8 for the Stella Artois experience in a dingy bar in NYC.

Little did I know that when I got off the plane in Brussels that I had entered beer heaven. The price of a Stella here was only 3 Euro and no tip necessary. The choices were overwhelming, and the prices were low. Open up the amber gates to beer heaven; I was ready to explore the world of Belgium beer!

Luckily I had a little help with my exploration in the form of Viator. Â  They kindly included me in a beer tour of Brussels; guided tasting of 8 beers at a couple of different bars while learning the history of beer making n Belgium. Like my chocolate tour, we were to take a leisurely walk around the city and enjoy the various beers intermixed with history. It actually just seemed like a nice way to say pub crawl if you ask me! 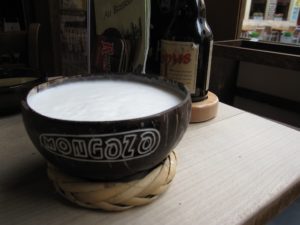 Beer in a coconut cup

The first thing IÂ  learned is beer in Belgium is like wine in France; itâs complicated, educational, and seriousâ¦ohâ¦.and fun. The whole country seems to revolve around beer; and so does the glassware. I had often wondered if the beer glasses which Belgian beer was served in had some meaning. In fact, when they brought out my coconut beer (yes, coconut), IN a coconut cup â my curiosity finally took over and I started asking. At first people told me it was simply marketing; the glass had no meaning. However when I asked my tour guide, Mark, he said the glass shape and style was designed for each beer to bring out the optimum flavor. A goblet, for example, lets the drinker’s nose inhale the beer’s aroma at the same time that the mouth drinks in the liquid. A tulip glass excels in foam retention. Iâm not exactly sure what the coconut does. However I found it rather strange you could look around a bar and see exactly what everyone was drinking. Imagine if you were in NYC and your glass had âGin and Tonicâ written on it; there is no âprivacyâ in a Belgian bar.

We went to our first bar which Mark told us was the oldest pub in Brussels. It was small, dimly lit, as the 11 of us squeezed into a table in the corner. We went from light to dark each with a different taste and alcohol content. A word of warning, Belgian beers are stronger than American beers. A typical American beer is 3.5% to 5%, but in Belgium you’ll find 5% is one of the weaker beers! 7% or 8% are common and even 10% or 11% isn’t exactly rare. This is an important thing to be aware of before you set out beer tasting else you wonât make it very far before the room starts spinning! Luckily, we were served smaller amounts of beer than your normal pint â however after a light lunch and a breakfast of chocolate, I was already feeling the effects of the potent Belgian brews.

After 3 tastings at the first bar, the other 10 people with me were quickly turning into good friends. We laughed our way out of the pub and swayed through the streets without a worry in the world. Mark pointed out various buildings and sites and even took us to see a glimpse of the old river which used to run through Brussels. But it all seemed as if it were disguised as a way to sober us up a bit before we had 5 more beers to taste! We walked by outdoor cafes with people lining the sidewalks socializing and drinking beer. They had even closed down a couple of streets and had set up lawn chairs on fake grass where people could sit and lounge outside with their beers. The atmosphere was sort of like a college tailgate party.

Lest you think this was all simply a pub crawl, it wasnât. There certainly was an educational component to it as Mark took his beer very seriously. However after the whole day was completed, little of the details of it sank it for me! However I did learn and remember the most important distinction about Belgian Beer; the two popular styles â Trappist and Lambic. 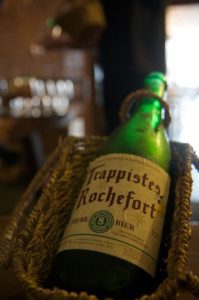 Trappist beers are beers brewed in a monastery. Yes â so in a weird way â this beer is approved by God himself. For a beer to qualify for Trappist certification, the monks have a hand in its production and profits from the sale must be used to support the monastery and/or social programs outside. Trappist beers are often classified by âdoubleâ or âtriple,â and sometimes âsingleâ or âquadruple.â The terms indicate alcohol content (double is stronger than single, etc.). So consider yourself warned!

Lambic beer is produced by spontaneous fermentation: it is exposed to the wild yeasts and bacteria that are said to be native to Brussels. It is this unusual process which gives the beer its distinctive flavor: dry, cidery, with a slightly sour aftertaste. If sour beer doesnât sound like your thing, all I can say is give it a chance. Many of the Lambic beers are created with a fruit taste; hence the coconut beer I had tried. Kriek, the sour cherry Lambic beer, seemed to be the most popular; and Iâm not going to disagree. During my time in Belgium I became addicted to cherry beer. They also had peach and raspberry versions. It was marketed as a âladiesâ beer which I somehow was able to overlook the stereotypical marketing and enjoy it anyway!

The 2nd bar we stopped at was Moeder Lambic and it specialized in only Lambic beers. Itâs motto was âBeer is the Answer.â Iâm not exactly sure what the question was, but I did like the answer! Luckily this bar also included some food with our beer tastings; traditional dark bread with a salty cream cheese spread. It was the perfect compliment to the sour beersâ¦and it also did a good job of soaking up some of my beer intake. 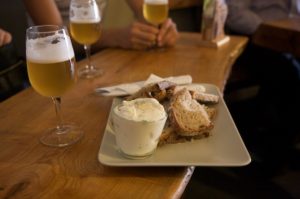 The bar tender lectured us on the different styles of Lambic beer and proceeded to go above and beyond when it came to tastings. He brought out big wine size bottles of beer all with distinctly different tastes patiently explaining what made each different as if he had a PHD in Lambic beer. Had this not been my 6th âsmallâ beer, I think more of it would have sunk in; however I had stopped listening at beer #5 and simply socialized with the other people on the tour and devoured the bread and cream cheese spread!
Three and a half hours after I started the beer tour I said goodbye to my fellow tipsy tourists and our guide Mark. I was a more knowledgeable on Belgian beer and definitely more carefree and happier than when I had started the tour. An afternoon of laughter and beer, what could be better than that?

Thanks to Viator Tours and Marc from Global Enterprises for providing the tour to me. It was a great tour to learn about the beers of Belgium while drinking them! Beer is so much a part of Belgian life, that it was good to really understand some of the history. And the 8 included tastings were too bad either! Learn more about the Brussels Beer tour.