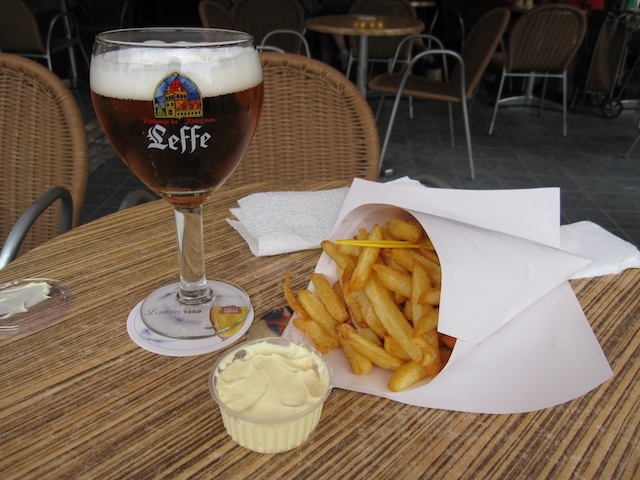 I was on a mission. A mission for potatoes. Not just any potatoes, but the specially fried potato known as frites. You might think that they are the same as simple french friesâ¦but donât be fooled into thinking that. They are more than french fries, they are special. And in Belgium, they are king. Belgians consume on average 75 kg (165 lbs) of fried potatoes per person each year, a third more than Americans.

Belgium is known for a few things; the EU, waffles, beer, mussels, chocolate, and frites. When I arrived in Brussels and saw people carrying around paper cones full of steaming frites I knew I wanted to find the best the city had to offer. I had read in a recent Reuterâs article:

âthere are more than 5,000 frites vendors in the country of 10 million people, which means there are 11 times as many stands per capita as there McDonald’s per American.â

Chocolate Frites…the best of both worlds?

So how do you find the âbestâ out of those 5,000? Where do you start? If you go to the touristy part of Brussels, around the Grand Place, youâll find plenty of friteries, but pass them all up. Yup, thatâs right, walk right on by. Donât waste your grease quotient for the day on the tourist joints. Instead you need to go where the locals go. I decided to do some research on this so I first started with the tourist office. I went inside and asked the woman for a map and where the best place to eat frites was. But before she could answer, I quickly corrected my question âWhere do you go eat frites in Brussels?âÂ  She quickly circled a place on the map called Place Jourdan outside of the main city center and near the EU buildings. âYouâll find the best frites here.â She said.

For a second opinion I looked at my Use It Brussels map (cool free map with tips from locals) and it had sarcastically listed 6 places as the âbest fritesâ in Brussels. So clearly there was some debate on this. However the Place Jourdan friterie was on their list.

I also asked other locals where they ate their frites. My friend Alison (an expat blogger in Brussels) said that she used to eat them in Place Saint Josse, but recently the man there who ran the friterie retired from frite making. âReally? Retired from frites?!â I said thinking it weird that making frites was looked at as a profession to retire from as well as sad he had no one to pass on his friterie to. Alison now goes to Place Jourdan to Antoine.

One of my good friends & former Brussels expat, Alison, spent years researching the Brussels food scene – including frites! She wrote a guide to the best food in Brussels – a must have item if you are traveling to the region!

Place Jourdan seemed to be coming up again and again as I talked to locals, so that was my answer. I would go have the frites fried up by Antoine at Place Jourdan.

I made the walk past all of the modern EU buildings which loomed over the old Brussels’ homes. Here in the middle of an old Brussels neighborhood stood the EU headquarters, as if they had plopped the White House in the middle of Brooklyn across the street from family homes and restaurants.. The walk was worth it just to see the old/new mixed together, plus it worked up an appetite for frites! 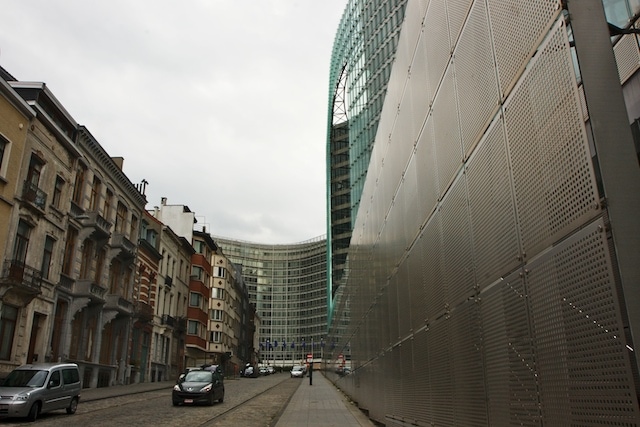 Old meets New thanks to the EU 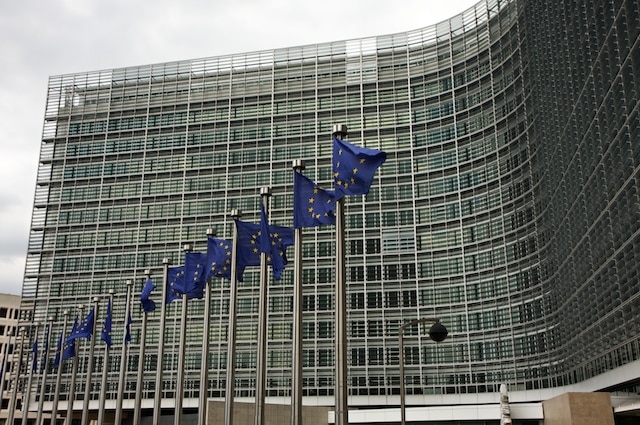 Where all the EU magic happens

Finally I arrived in Place Jourdan. At the far corner, there was a stand-alone octagonal building with exhaust fuming out of it. The fumes of grease beckoned me nearer. Like any good Belgian friterie it had a long line snaking around it.

I got in line and started to read through the large list of choices. No, there werenât different choices of frites just petite and grande; the myriad of choices was for sauce! Curry, mustard, ketchup, pickle, pita, Chinese, Bicky (??), and of course Mayonnaise. I decided to stick with the traditional way to eat them, with mayonnaise. Sounds weird â but itâs strangely tasty. 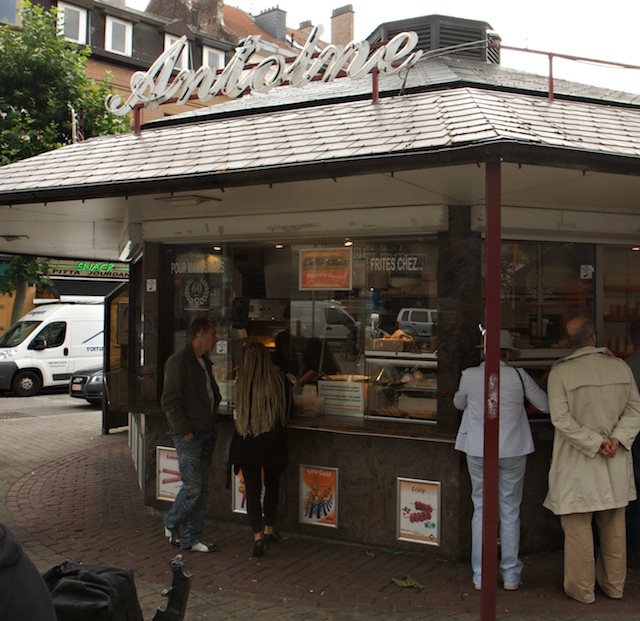 The house of Antoine!

What make potatoes frites? And more importantly, what makes the ones from Belgium so damn good? Thereâs an art to Belgium frites. First it starts with fresh Bintje potatoes and next you have to do a double cooking process in vegetable oil, sometimes with beef or duck fat added.in. Frites are fried once, allowed to cool, and then fried again before serving. 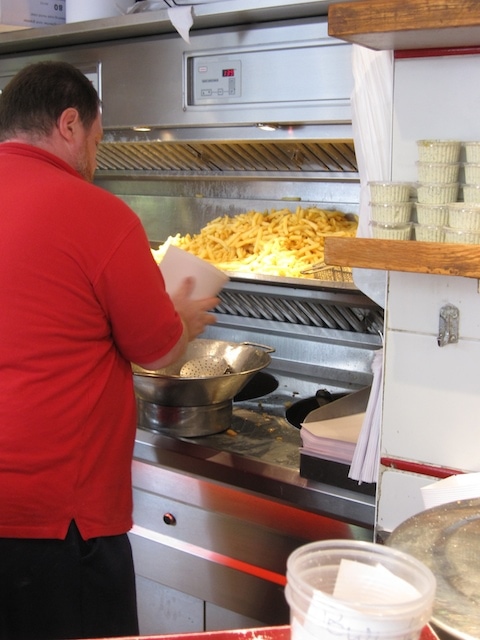 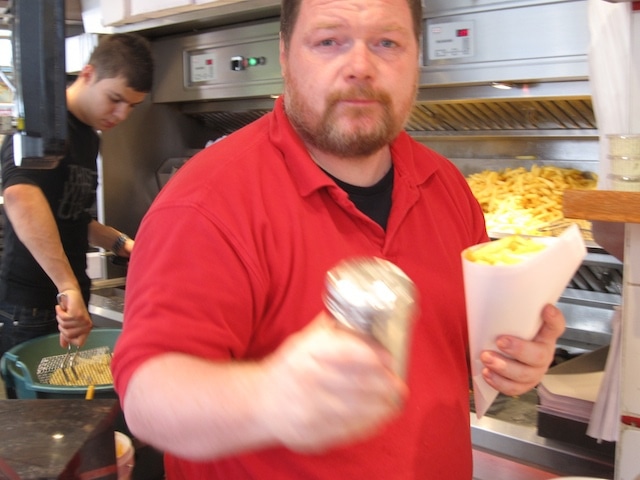 After Antoine shaked a healthy amount of salt on the twice fried frites, he handed over my cone of petite frites with a side of mayo complete with a little plastic fork. I now needed to find the other half of the Belgium couple – beer; a marriage made in Flemish heaven.

I held my cone of hot frites like it were ice cream and wandered around the square to see if there were any bars. I didnât have to walk far to find a little bar with a sign in the window reading âFrites Acepteesâ I deduced that this meant it was ok to eat my frites at their barâ¦perfect! I found a great seat outside where I could watch the square, and had a beer at Chez Bernard while eating my frites from Chez Antoine.

I took the hot salty frite out of its little cone using my plastic mini frite fork, dipped it in the side of mayo, and sampled Chez Antoineâs recipe. When I bit into the first frite, it was perfectly crispy on the outside and mushy in the middle!

Where do you think the best frites in Brussels are?

20 Responses to "Best Frites in Brussels"