âWe don’t have electrical plugs in the room to stay true to the history of Ma Johnsonâs, but also because we think it makes people more social to sit in the common area and interact,â she said as she showed me around the lobby and headed towards my reserved room. The place felt a bit like my grandmothers old farmhouse; a mix of functional and feminine. Lace doilies, flowery pillows, and plenty of antiques dot the lobby of this remote hotel. Ma Johnsonâs Hotel used to be an old boarding house and brothel and as you step up on the big porch and enter the lobby, you feel as if you have moved back through time indeed. Ma Johnsonâs has rooms for rent and shared bathroom facilities; and if you donât like shared bathrooms, then you are out of luck in McCarthy, Alaska. In this town of 40 full time residents, this is the only hotel in town.

âWe also don’t have keys for the room, â she explained âthere’s really no need to have them – your stuff will be absolutely safe.â I loved this little hotel and town already and was thrilled to be staying in McCarthy as opposed to the big, luxe Kennicott Glacier Lodge outside of town where all the other couples on my Wrangell Mountain Air bush flight were shipped off to. I was surprisingly the only one heading to McCarthy 5 miles away.

I came to small-town McCarthy to experience its remoteness and history as well as itâs surrounding Wrangell St Elias National Park and abundance of glaciers (and the best part, McCarthy Alaska travel is relatively unknown!). However, I also had another reason, I wanted to understand why people would live here in this remote area and tiny town.

Ironically this tiny little town was surrounded on all sides by the largest US National Park, Wrangell St. Elias. I arrived with only 1 week left in the tourist season, so shelves were a practically empty in the one local market and you could tell people were a bit antsy. McCarthy is really only open to tourism for 100 days of the year. People were getting ready to ship out, and a few were ready to hunker down for the long winter.

McCarthyâs ‘Main Street’ was gravel and riddled with potholes. A shuttle ran around the town but I was rather confused as to what it went to. As far as I could tell there were two gravel roads no more than a 1/4 mile long. That was it. A hotel, a hostel, a few run down cabins, 2 restaurants plus an occasional pizza truck found across the river. The only way to describe this town was âsimpleâ. 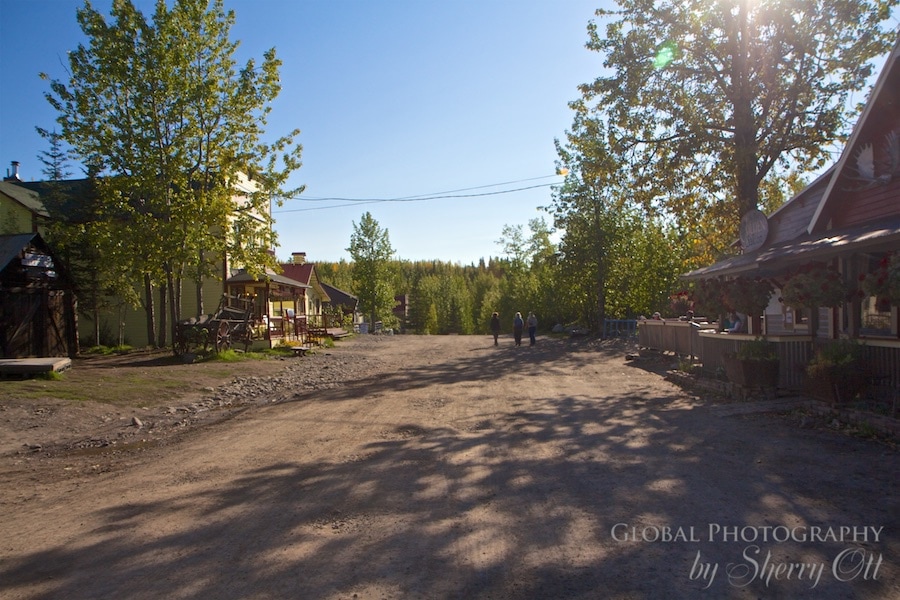 But it wasnât always this quiet. In 1900 copper was discovered in the area around McCarthy and soon a mining business was created by Kennecott Mining Company. Because alcoholic beverages and prostitution were forbidden in the mining âcompanyâ town of Kennecott, the town of McCarthy grew 5 miles away as an area to provide those in-demand services not available in the company town; namely drinking, gambling, and prostitution. McCarthy was modeled after the wild western towns and still has that same personality today.

I walked up the gravel road to the museum. A woman and her dog sat outside soaking up the warm sun. She wore a badge that read âCuratorâ so I struck up a conversation with her while petting the âmuseum dogâ as she referred to him. I asked about McCarthy and she launched into telling me all about the mining history and prohibition. However, I waited until she got done with the history âlessonâ and ask her what I really want to know; why do people live here now and what draws them here?

âI just like getting away and being in a place where people can’t find me, and they can’t reach me by cell phone,â she replied unapologetically antisocial. I kind of got it though â sometimes you just want to disappear; and McCarthy is a great place to do that.

She lived year around in a âdry cabinâ (no running water) and needed to do a water run yet that night, so she was getting ready to close the museum but let me quickly walk through it first; a fascinating walk through newspaper clippings, railroad and mining history. 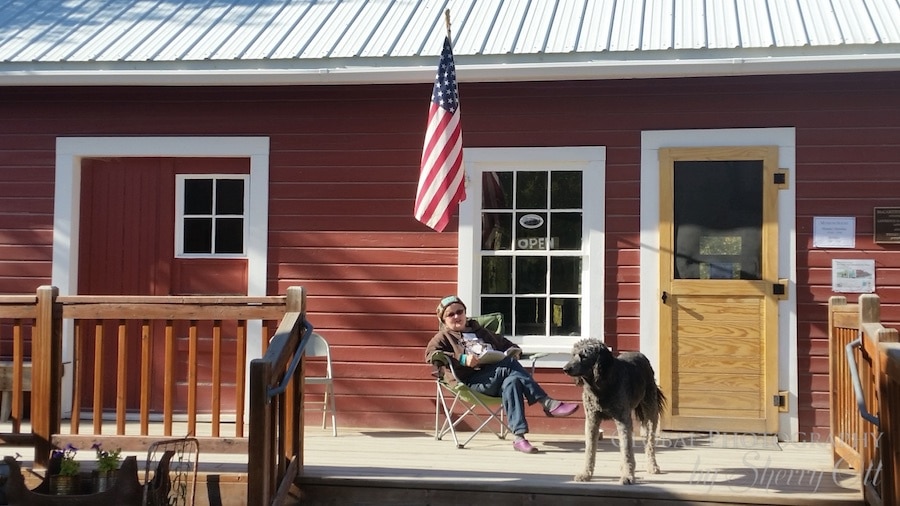 McCarthy Museum – a curator and her museum dog.

Neil actually refers to a âdowntownâ when he talked about McCarthy with me. I inwardly chuckled when I heard this. Neil bought Ma Johnsons and the nearby restaurant and hostel in 2001 and has been slowly restoring and fixing it up ever since. He came here in the mid 80s and fell in love with the area. As we stood on muddy Main Street, he looks around the town and says âI love marrying the people/history and artifacts together. I call it Rustporn.”

Neil loves collecting and showcasing old things; which explains Ma Johnsonâs dÃ©cor. Heâs a controversial guy in town, wanting to make changes and improvements. Not an easy role when it comes to a small town of 40 people who are pretty set in their ways and are probably here because they want to be alone.

Heâs currently working on a new project for the town, creating a town event area, sort of like a town square. He also has instituted an Artist in Residence program helping him create the feel of the space as he is a strong believer in the art and feels that every community – no matter how small – needs art.

âYou have to love yourself if you are going to live alone in Alaska in the winter,â Neil explained.

We talk a bit about what itâs like to be in McCarthy year around when the few tourists leave in September. He said that he loves sharing the place in the summer, but he also loves having the town to himself in the winter. The best part is that every day is different – losing and gaining light. 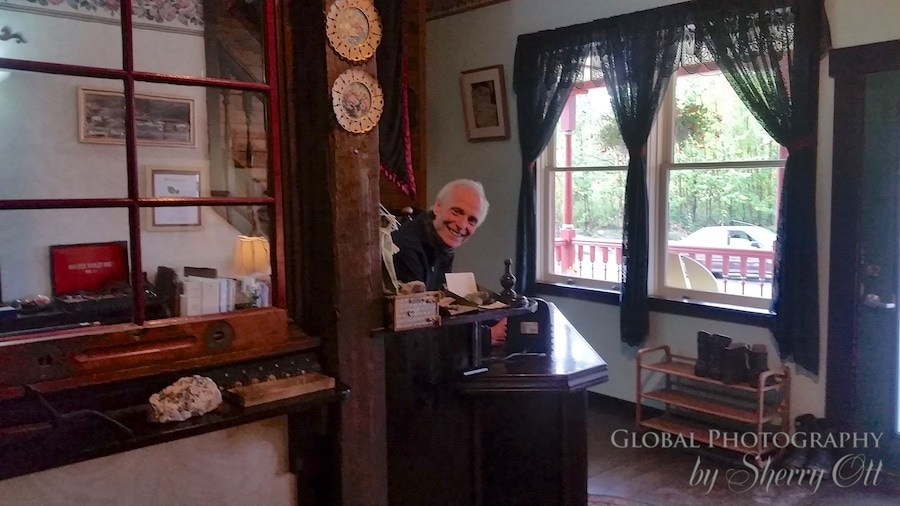 I meet part time resident Camille, my young St. Elias Alpine Guide, who will be leading me on a full day glacier hike as well as a tour of the abandoned Kennecott Copper Mine.

She was a college graduate doing seasonal work in McCarthy Alaska leading people through the beauty of Wrangell St. Elias National Park â a dream job for many outdoorsy 20-somethings. However like most âdream jobsâ â there are some sacrifices you have to make. Camille lived in a tent all summer and slept in a sleeping bag. Most of the seasonal St. Elias Alpine Guides did the same. She was able to shower every 3 days using a âbucket showerâ. As I heard about her lifestyle in this small town, remote environment I wondered what kept her there. I reasoned that it must be her love of the area, a relationship, youth, or not knowing what she wants to do in life. As I talked to her more about her plans and goals I realized that the answer was probably the latter. She was in that stage where she was trying to figure out her next life moveâ¦and even though I was 20 years older than her, I thoughtâ¦so am I.

Camille and I had a fabulous time exploring Root Glacier for an entire day by ourselves. Since it was the end of the season â everything was pretty emptyâ¦and thatâs just how you want a glacierâ¦all to yourself. 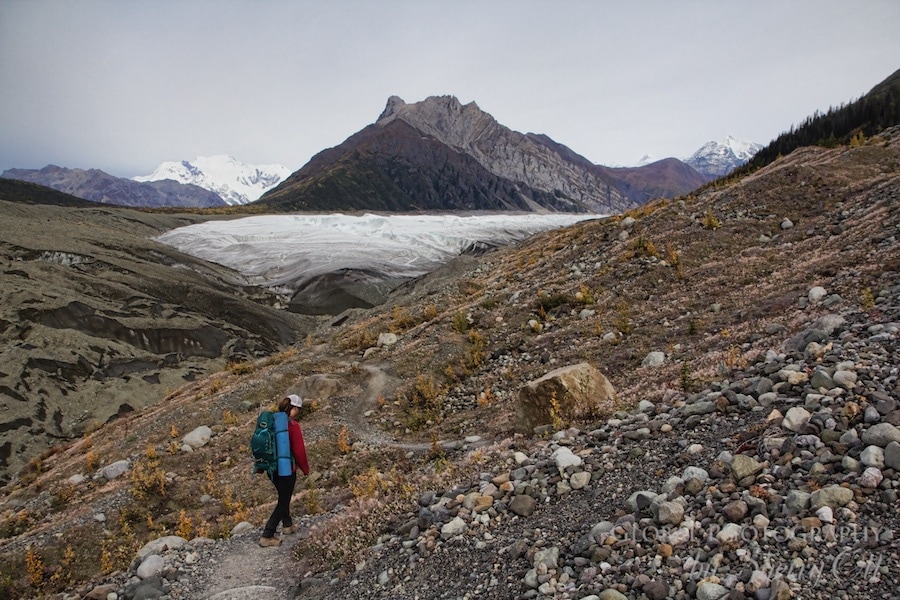 Camille leading me out to the Root Glacier 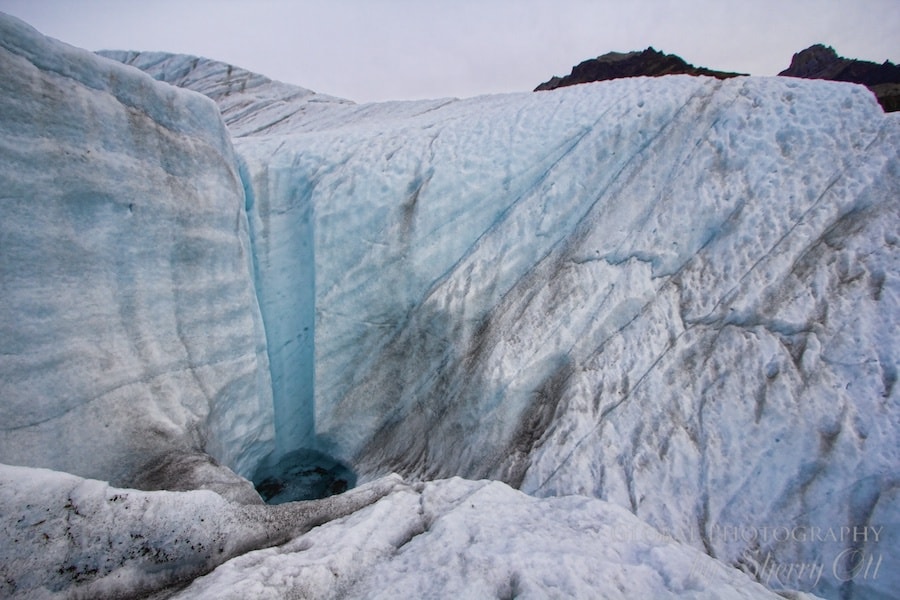 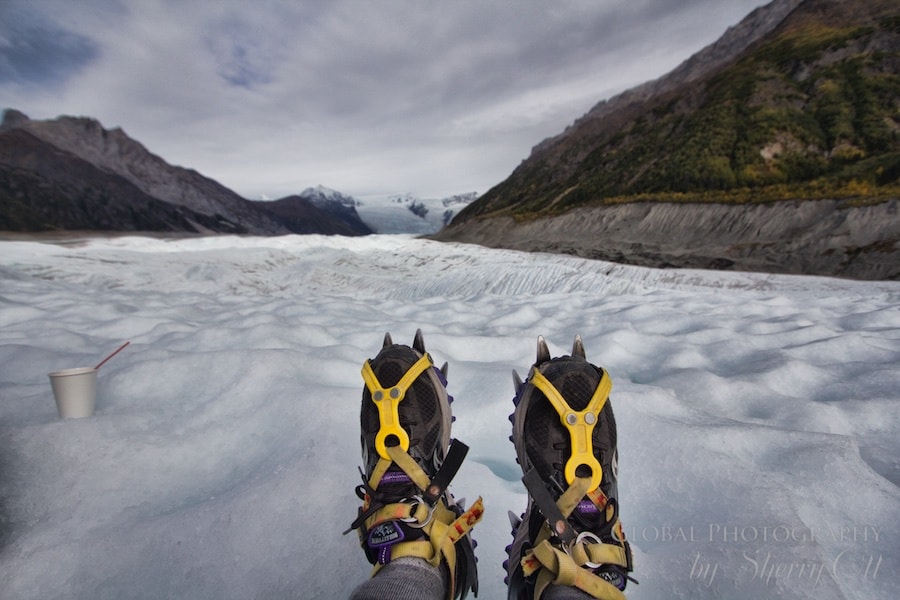 Eating lunch with a view 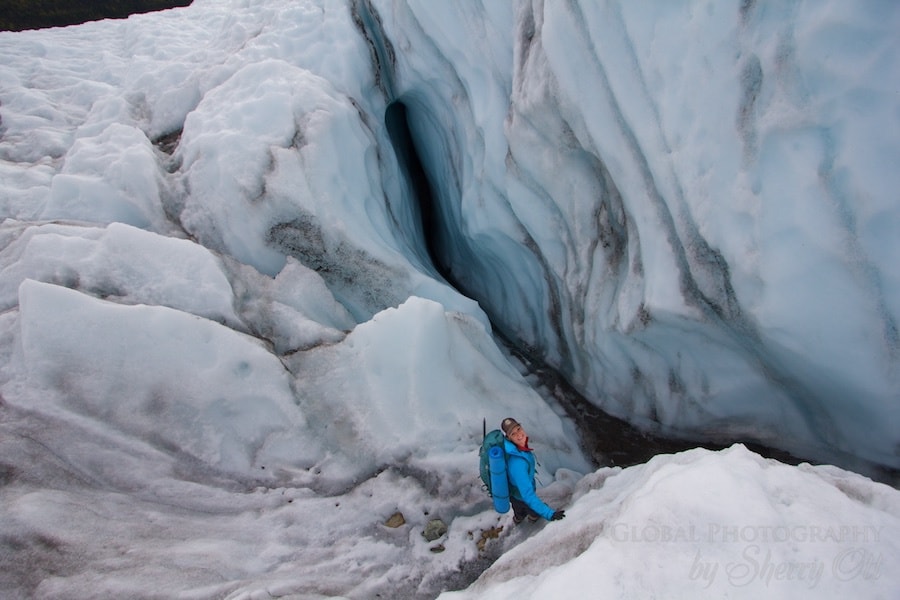 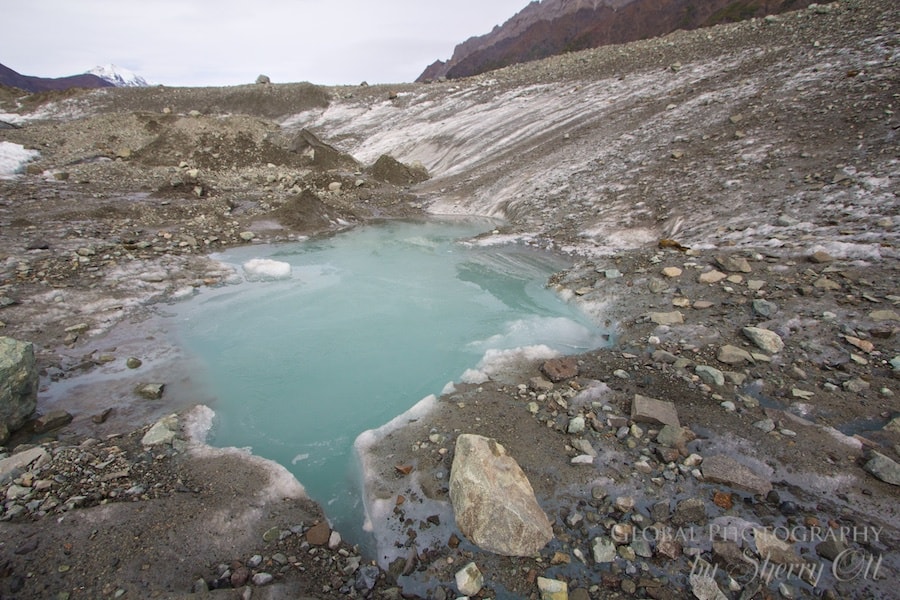 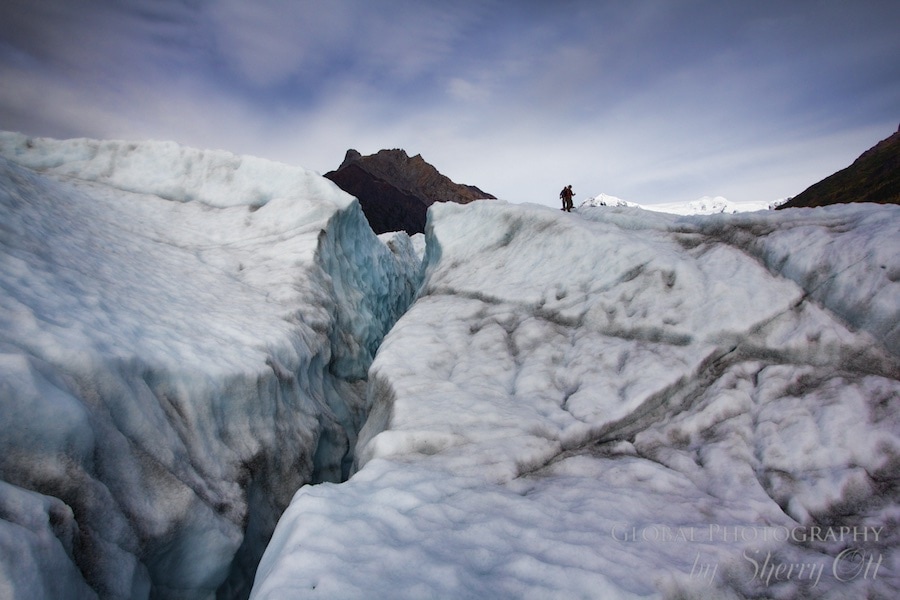 Later that evening I went to dinner and open mic night at the Golden Saloon as it was the only place open this late in the season to have dinner. On my way there I ran into Neil who asked me about my day and we went for a stroll on Main Street. As we walked, I saw the Museum lady and her dog drive by in a pickup with containers of water in the back; she gave me a friendly wave. At the Saloon later that night I ran into Camille and her friends enjoying their last nights together in the season before they all took down their tents and went their separate ways.

As I drank my beer, and listened to the âlocal talentâ at open mic night, I thought to myself, it doesnât take long to become a part of McCarthy, or fall in love with it.

Things to do in McCarthy

McCarthy is a simple town, but donât think that mean thereâs nothing to do there. McCarthy is surrounded by the USâs largest national park, Wrangel St. Elias. There you have a wealth of hiking trails, peaks, river rafting, and glaciers at your disposal to play on. You can hire a St. Elias Alpine Guide and youâll find all of the nooks and crannies of the park and the glaciers.

You can also take a half day and explore the old abandoned Kennecott Mines.Â  I had a great morning learning about the history of Kennecott and doing photography of the abandoned buildings.Â  The St. Elias Alpine Guides lead this tour too.

Stay at Ma Johnson’s Hotel for a authentic McCarthy experience!

See all of my photography from the Abandoned Kennecot Mine

I was a guest of Alaska Tourism on this trip, however all opinions expressed here are my own.

15 Responses to "Remote Living and Traveling in McCarthy Alaska"