Experience Dog Sledding in Alaska and Mush Your Own Team

Experience Dog Sledding in Alaska and Mush Your Own Team

I looked around the Two Rivers post office wondering what it was like to live in such a small community in Alaska. In this tiny little ârest stopâ along the Chena Hot Spring Road, the post office and the general store were attached to each other and seemed to be the hot spot of the town. I watched as locals chatted away with each other as they came and went from the building. It was clear to me dog sledding was the pastime here. The post office walls were lined with pictures of past Yukon Quest winners and the bibs they had worn; it was like a shrine to dog sledding. I quickly learned that the Quest route actually comes right through Two Rivers, and itâs probably the highlight of the year for this little community just 30 minutes outside of Fairbanks.

As I surveyed each winner’s picture I stopped on a familiar looking one; the 2016 Yukon Quest winner, Matt Hall. Wait a minute, thatâs the Matt I just met at the Last Frontier Mushing Co-op. Clearly our decision to do a dog sledding tour with the Last Frontier was a good one! After talking to a couple of the owners for a while and deciding upon an aurora dog sledding tour and a half day mushing school, I already knew this coop was pretty special â even before I found out the previous Yukon Quest winner was a part of it! 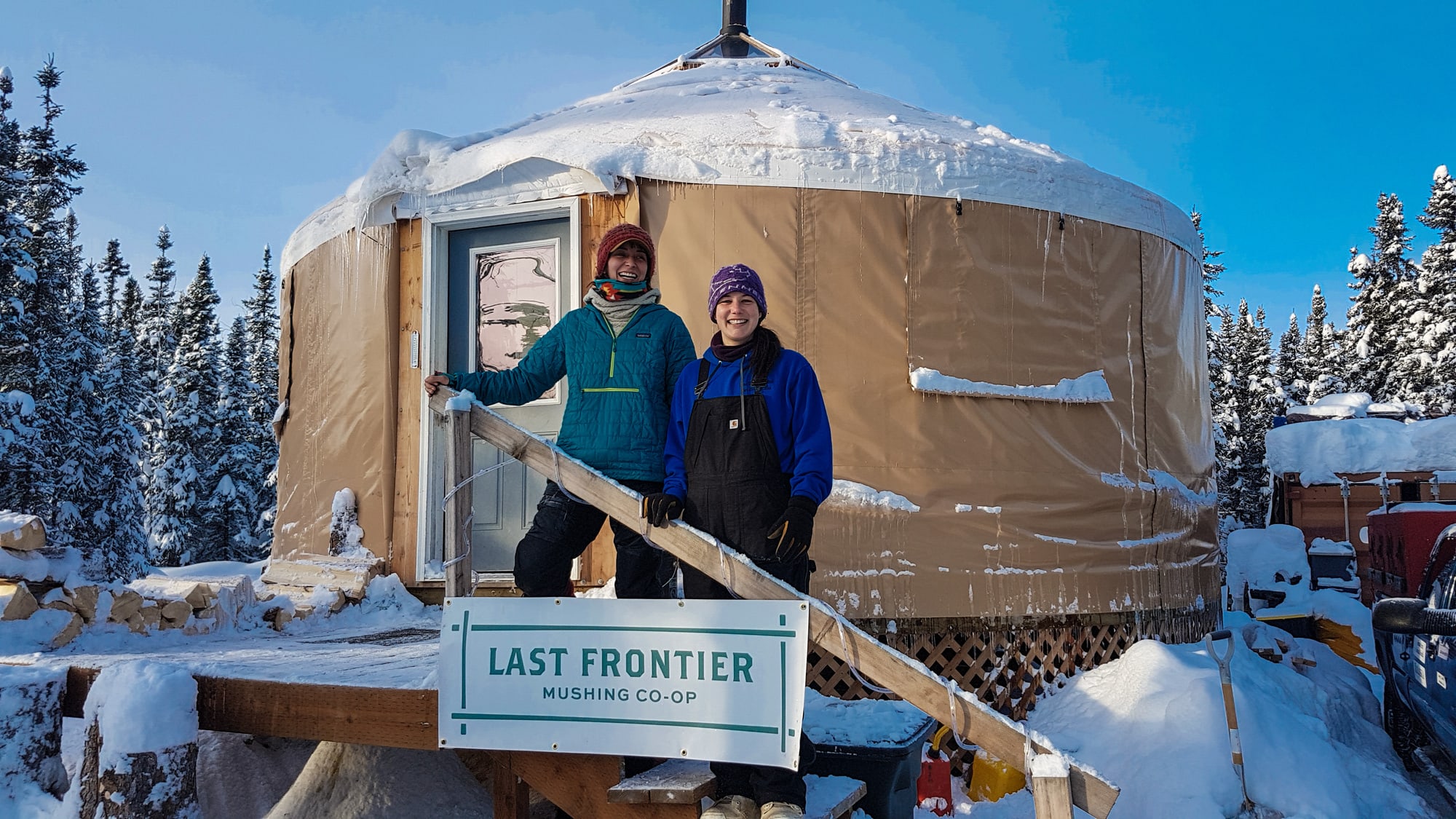 The coop started with a land sale. Musher Ryne and her husband Derek bought 150 acres of land in Two Rivers. They decided to sell off two 40 acre parcels. Ryne described the thought process of how they decided to sell, “In Alaska you rely on your neighbors. And itâs so nice to surround yourself with people that you enjoy who can also come over and help you out if a big snowstorm comes in and the road is plowed in. Or you want to go on vacation and you have 50 sled dogsâ¦it also helps to have some neighbors who also have 50 sled dogs and will come take care of them and know what they are doing.”

Amanda and Matt of Smoking Ace Kennels, Chase of Tukaway Kennels, and Ryne and Derek of Ryno Kennels decided to join forces as neighbors and as business partners. The land had been on the market for a couple of years. But no one wanted it because there was no power to it, and there was no road.

Living Off Grid in Alaska

This young group of Alaskans didnât see that as an issue. âWe were like – yeah – we donât need electricity – thatâs fine,â Amanda speaking as a true Alaskan. They put the road in (which is a gorgeous 3 mile drive by the way). They used a great network of people that made the land livable. And each ironically chose different structures to live in. Matt and Amanda have yurts off grid. Ryne and Derek are building an off grid cabin (they harvested the lumber from the area and brought them in and peeled and milled it themselves â Yesâ¦typical Alaska). And Chase is a stick frame off grid home.

They haul firewood to heat their homes, skid logs to build their cabins, and carry drinking water from the river with their sled dogs. Currently running off generators, they have long-term goals of staging solar panels & battery banks. This young group of mushing fanatics were living the Alaska outdoor lifestyle with the help of sled dogs.

As you can tell, I was sort of mesmerized by all of them. They embody Alaska Dog Sledding culture. 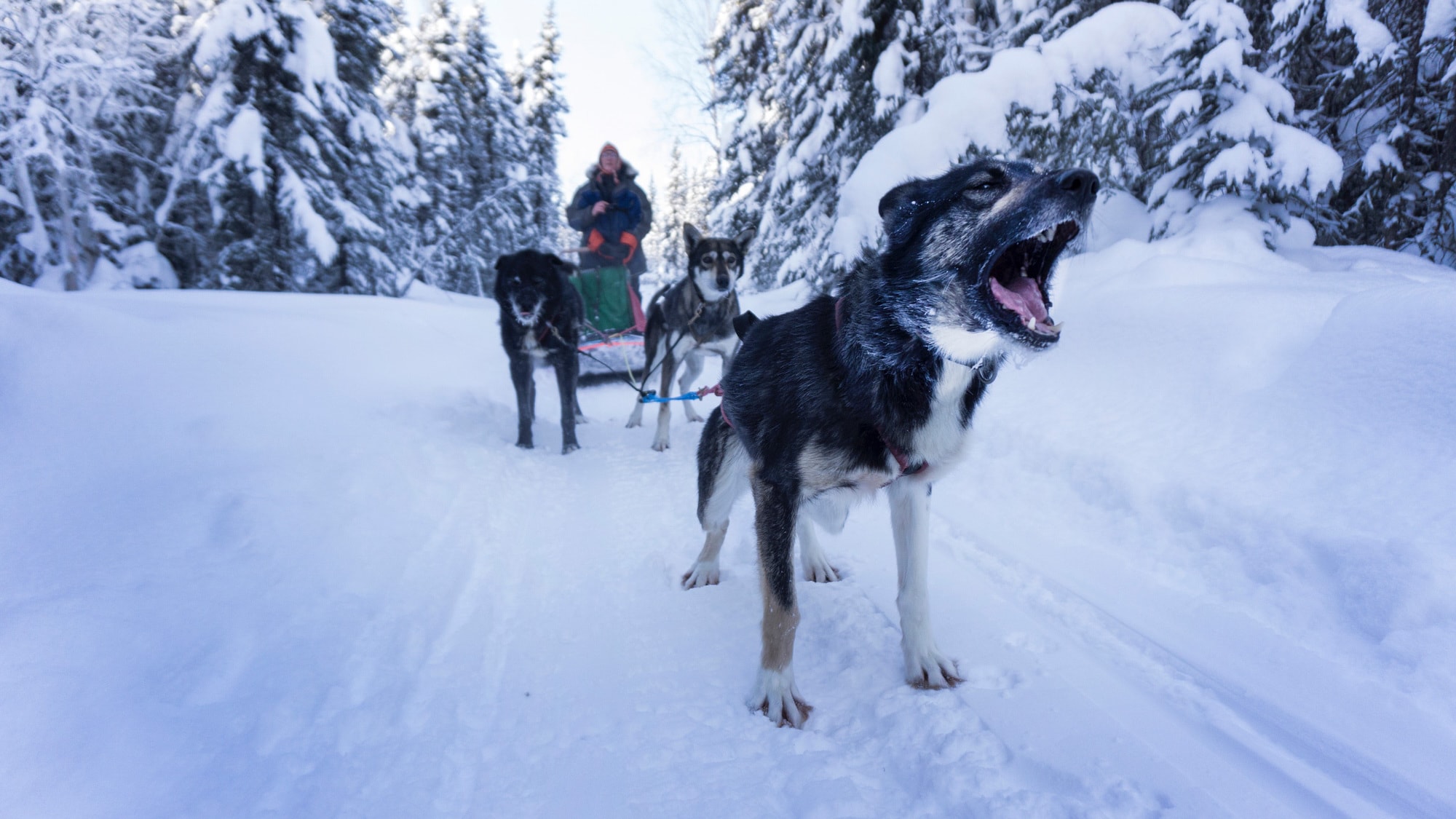 The coop was formed after the land came together in 2017. They sat down and determined they were all doing different tourism offerings (Expeditions, aurora & day tours, long distance guiding) that could work well together. “We are all going to be living next to each other, we donât want to compete against each other. We concluded, why donât we work together,â Amanda said.

In addition, racing is a really expensive sport (you wouldnât believe how much they spend in food for the dogs alone!) – so you need to find a way to make money to support the racing aspect. Tourism is a really good way to do that.Â  They started doing day tours in 2017.

Collectively they are known as the Last Frontier Coop, but they still have separate racing kennels. Their goal is to offer a high quality experience from professional mushers. They donât want people to simply dip their toe in and go for a 30 minute ride, they want them to connect with the dogs and the culture. Because of that their shortest tour is 2 hours.

And this is exactly why I chose the Last Frontierâs Mushing School. The mushing school is a half-day experience where you go through each step of how to mush. From how to dress, to how to harness the dogs, and control the sleds. You take a series of baby steps and before you know it you are operating your own sled through the boreal forest leaning into turns and ducking under branches.

âPeople think mushing is easy like driving a car. We have to let people know that it is really physical.â –Ryne

A Community of Mushers Where the Dogs Are Their Life

I was pretty excited to learn how to mush from Ryne and Amanda â they were badass. They both race competitively; Ryne is the 2017 Copper Basin Champion, and a Yukon Quest finisher. And as I was finishing up âschoolâ I saw Matt come in with his racing dogs from a training run. In a week he was off to race the Iditarod. It was incredible just to see the dogs breath and devour their after training snacks. I even met Keeper, the lead dog from his Yukon Quest win. In the dog sledding world, meeting a dog like Keeper is like meeting Tom Brady.

I’ve never had so much love! Photo by Michaela Potter

Iâve been on a few different dog sledding experiences before, but what the Last Frontier Coop offers is truly exciting and immersive. My two dog sledding tours I did with them were both quite unique and Iâve never been able to be so hands on with the dogs before. And donât even get me started on the puppies!

You will walk away from this experience with knowledge of the racing culture, and an appreciation for life in Alaska off the grid.

As I got to know Amanda and Ryne through my mushing school experience and the northern lights tour we took the night before, I realized these women never stopped. The racing and training, in addition to the tourism business kept them constantly busy.

âIf you love what you do – then you donât know what else to do when you arenât doing it. â âRyne

I was a guest of Explore Fairbanks for this trip, however all opinions expressed here are my own.