I survey my surroundings; the room feels like a patchwork quilt of cheap wood paneling, rusted metal, exposed florescent lighting, particleboard walls, and industrial carpet.Â  I canât really expect much more when you are essentially staying in a truck stop above the Artic Circle. This is one of these times when itâs REALLY about the experience.

I twist the facetâs hot water knob a bit and nothing happens. I turn it all the way on – nothing. I try the cold water – nothing. Apparently our hotel is without water. Am I surprised? Not really. I just get out my pack of wet wipes and wash off my face. I think about how this is really sort of like camping and maybe thatâs why they refer to it as Coldfoot Camp. After all, saying that I’m staying at Coldfoot Camp sounds a little nicer than Iâm staying at Coldfoot Alaska truck stop. 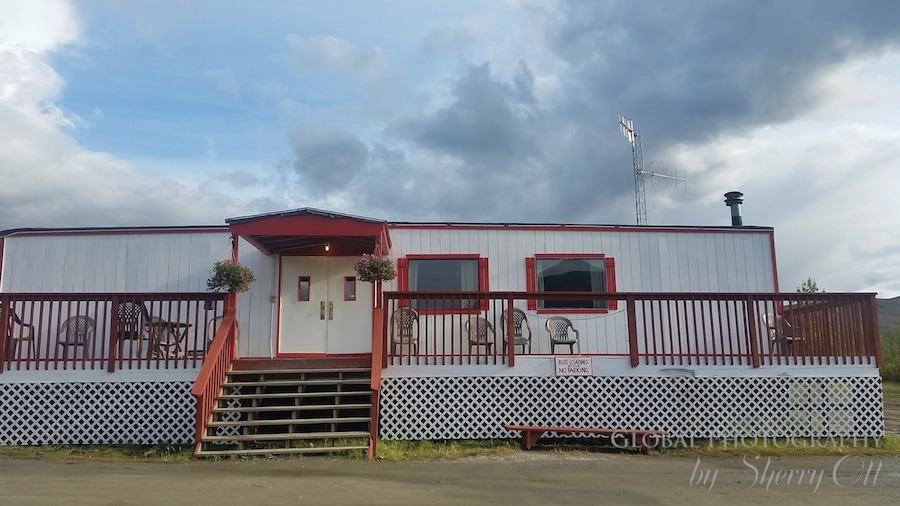 The lobby to the hotel…

I decide to walk over to the main restaurant building next to the gas station and try to get some water so I can brush my teeth. I walk out into the long narrow hallway and look down at the mousetrap next to my doorâ¦still empty. Not sure if I should be happy about that or sad that there apparently are still mice running around here freely. I see a torn piece of paper taped to a door that reads âDo not disturbâ. Rustic? Yes, they didnât even bother with a post-it note.

Once outside the âlobbyâ, I survey the sky â itâs a cloudy, rainy day and I wonder if Iâll be able to see anything on my tour further up the highway. I cross over the 100 feet of pure mud that separates the hotel and the truck stop. I carefully try to place each step in the least amount of mud possible, but itâs a losing battle. 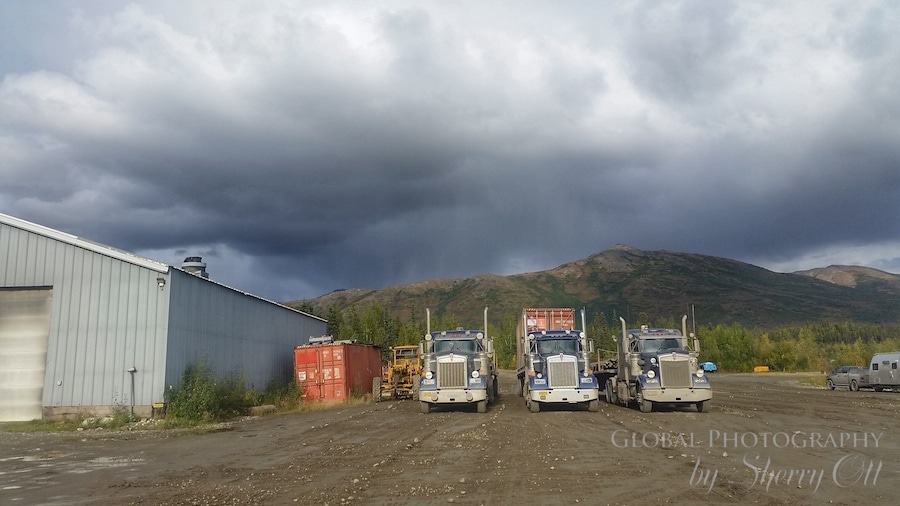 Trucks stopping for a break

Iâm staying in Coldfoot Alaska, a truck stop above the Arctic Circle. Itâs one of 3 âcommunitiesâ along Alaskaâs Dalton Highway with a population of 10 according to the census in 2010. This is first and foremost a truck stop, and as an afterthought it was decided that tourists may like this unusual experience too. So here I am, staying in Coldfoot Alaska, at the truck stop hotel. Itâs basically a âhotelâ made out of modular housing units, originally made to house construction workers on the pipeline. There is no TV, no wifi, no cell phone coverage, and no frills. However you are above the Arctic Circle at a truck stop in the middle of nowhere, you donât need frills. You have Northern Lights to watch instead.

Itâs so off the grid here that there is a wooden message pole in the restaurant that has notes taped to it. âBrian â call Jim,â one reads. I smile inwardly remembering back to a time in my childhood when this was a normal mode of communicationâ¦physical, hand-written notes. The message pole has a bunch of names carved in it and it represents the heart of Cold Foot. When the pipeline was constructed in 1974, Dick Macke drove a school bus outfitted with a stove up the highway with the intention of selling burgers and coffee to truckers; the first food truck in the Arctic! Since there was no where to stop for food along the highway back then, there were 200 truckers waiting for him the first day. Dick stayed, and the truckers kept stopping. However they did more than just stop; the truckers started hauling scrap wood from the North Slope and basically constructed their own truck stop around the bus. The message pole in the middle of the building has the names of all of the truckers who actually built the truck stop. I didnât think the âmessage poleâ could get any cooler, but it just did.

Since itâs still the only truck stop on the entire highway and it offers free coffee 24 hours a day â the place is always busy. Itâs filled with truckers, pipeline work crews, and a few tourists like me. We all fill our plates from the buffet (which was surprisingly good food), and eat under one roof, as itâs the only food around for miles and miles. However we donât all eat together; the truckers have their own section of the building â a corner with a sign that reads âTruckers Onlyâ. 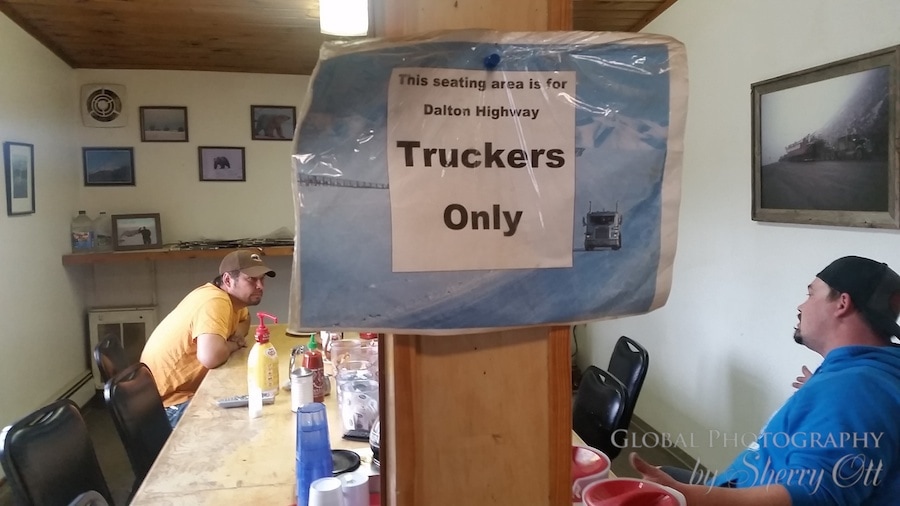 The Trucker’s table, it took all the guts I had to simply ask to take a pic of the sign!

This trucker segregation intrigues me. It was sort of like the mafia tableâ¦no one messed with them; they had their own space where they could talk, smoke, and drink coffee. I felt like if I needed a âfavorâ that I should request to see the men at the trucker table. I find myself glancing over at the table to observe them, but Iâm careful to not make eye contact for fear of someone yelling at me. I get the nerve to walk over and sheepishly ask if I can take a picture of the sign, and they say yes, and go about their discussion. I ask the woman behind the counter why there was a trucker section and she explained, âThey deserve their own section â they built the place and thatâs why weâre all here. Plus, itâs a place where they can all hang out and socialize.â

On another note, the woman also informs me that they had a little problem with the water this morning, but itâs now fixed.

However I look around and decide to grab a cup of free coffee and hang out for a while. Iâm in no hurry. Iâm not going anywhere. So I might as well soak up the âlocalâ atmosphere above the Arctic Circle.

The inside of my room

Signed with a happy face!

How You Can Stay at Coldfoot Alaska Truckstop

Even though a room at Coldfoot Camp costs $200+, it is not luxury accommodations. Heck, you may not even have water! First and foremost this place is a truck stop, so donât come here expecting special tourist treatment. This is a real place, with no frills, and people doing their job. And that is exactly why I loved it here. This was a real glimpse into local life along highway in a seldom seen part of the world. More infoÂ  – Hotel Website

You can book a room for a night, or as part of a Dalton Highway package or Northern Lights package.

I was a guest of Alaska Tourism during my stay in Coldfoot, however all opinions are my own.

6 Responses to "Sleeping with Truckers"