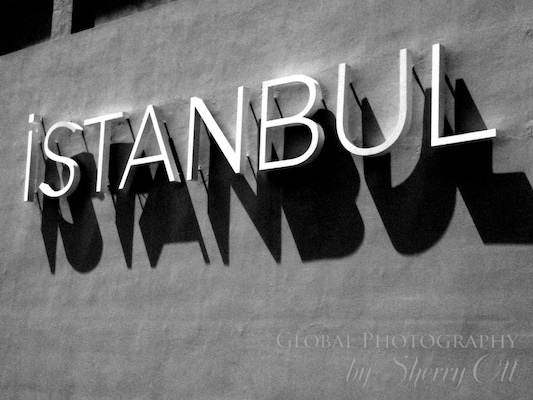 In a city of 13 million people covering 2000 square miles how do you know where to begin? Istanbul is one of the largest cities in the Mediterranean and it is easily the largest city in Turkey. Itâs been growing since the 1950âs when migrants from Anatolia flocked to the city in search of economic prosperity and the city has been expanding to accommodate them.

What does this mean for you â one of 7 million visitors to Istanbul every year? It means you have some tough decisions to make when you are trying to decide where in this vast metropolis you want to stay and what you want to do!

During my four week stay in Istanbul I stayed in 3 completely different neighborhoods and visited about 4 more in depth via some great walking tours. Like most cities, each neighborhood has itâs own feel so Iâve tried to provide you my opinion on what each neighborhood can offer you – the visitor – as well as give you a peek into what the neighborhood culture there was like.

This isn’t the best map – but it’s the best one I can find. Â Some of the neighborhoods I’m talking about aren’t really marked on this map – but I’ll try to do my best to describe their location 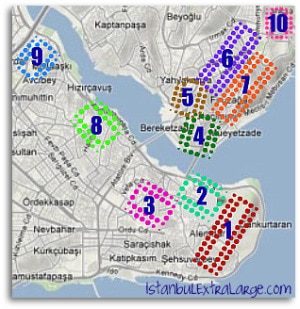 Tourist central â the easiest place to stay to tick off all of the main sites. Not many ârealâ Istanbul locals living in this area though. However at certain times, such as Ramadan (while I was there), the historic sites draw a local crowd that is impressive to see and experience. Here youâll find a ton of hotels, Hagia Sophia, the Blue Mosque, Grand Bazaar, Topaki Palace, Basilica Cistern, and a ton of tourist restaurants and souvenir shops. Good public transportâ¦but not what I would call the âreal Istanbulâ. 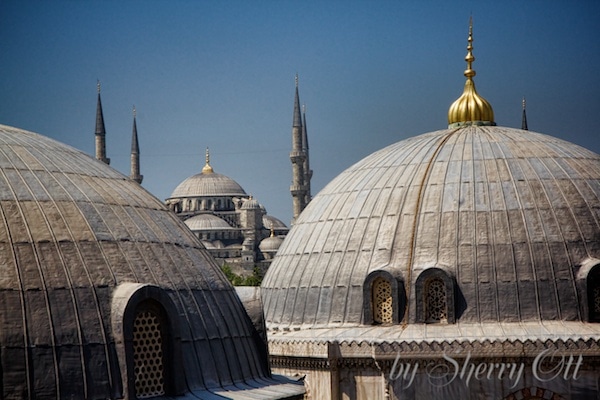 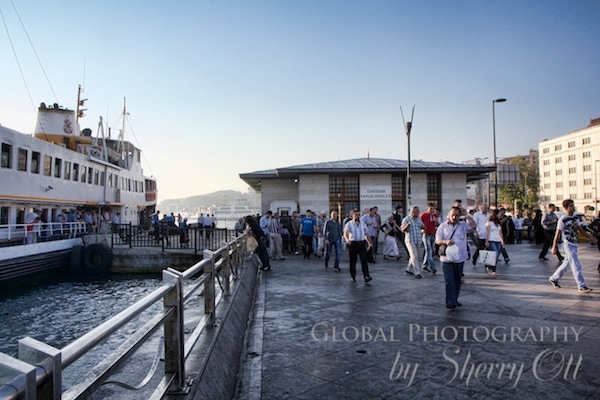 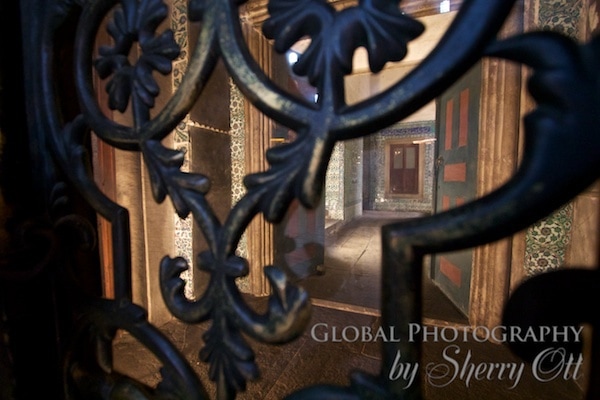 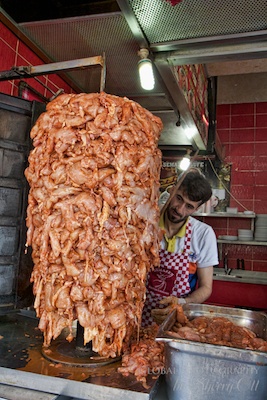 Chicken kebab prepared in the morning for eager tourists at lunchtime

Galataâs modern name is Karakoy, but I found the two interchangeable. The area is actually a part of a much larger district called Beyoglu which also includes Taksim Square. Â This neighborhood is touristy, but intertwined within cruise passengers, and souvenir shops are locals who have lived in the area their whole life. I stayed for 2 weeks in GalataÂ Â and felt like it was just the right mix of tourism and local culture. Itâs great for shopping as little hipster boutiques are dotted among the old run down abandoned buildings giving you the preview of what is to come for this popular neighborhood. Plus â youâll find the Istanbul Modern Museum in this area too â a great stop to make if you are in the area. I really did love the mix of visitors/locals/expats here. It was a neighborhood of diversity but most days I really felt like I was a part of the neighborhood as opposed to simply a visitor in a neighborhood. Â My pick for best location so you can get a bit of everything out of your stay. 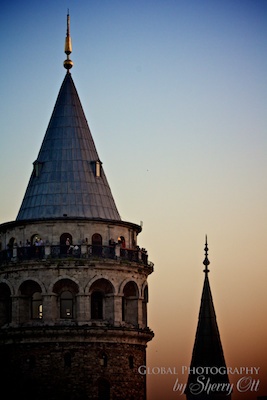 Galata tower provides a nice view of Beyoglu and beyond 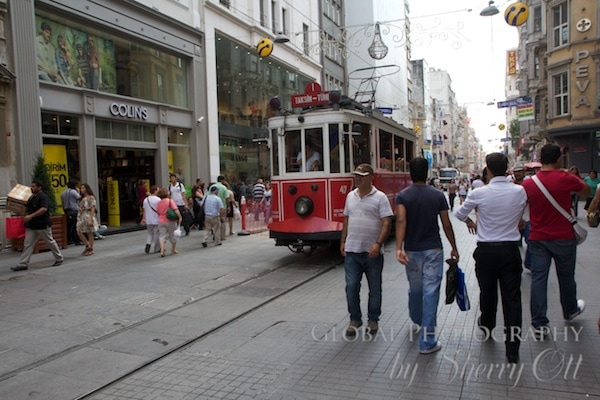 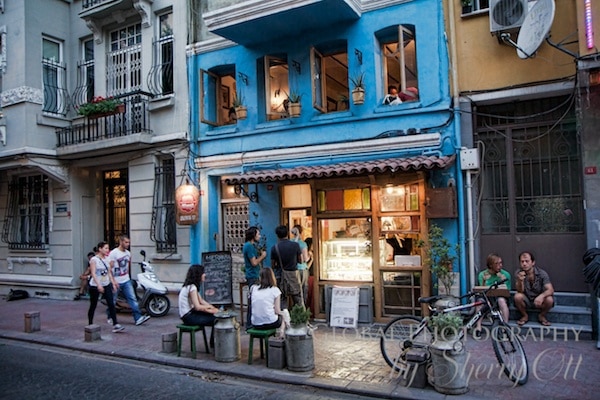 Trendy restaurants and cafes line the streets of Galata 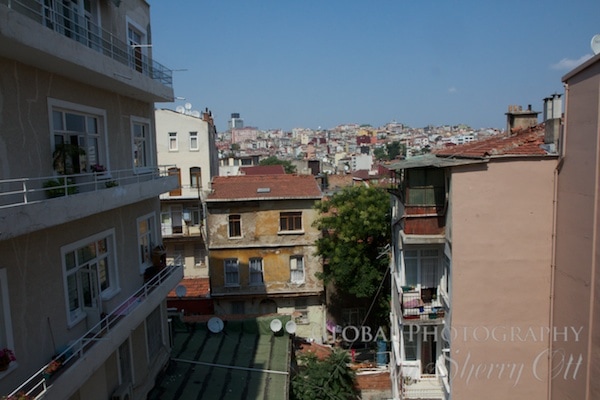 The Galata neighborhood is built upon hills! 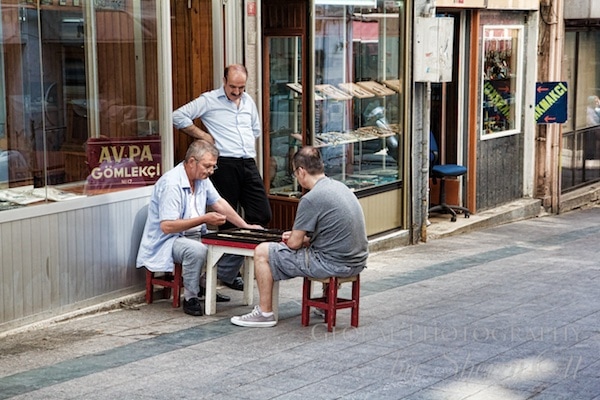 This is where youâll find everyday life of the business population â the streets are filled with banks, businesses, and shopping malls. In fact Europe’s largest and the world’s second largest (urban-area) shopping mall, Cevahir Ä°stanbul, is situated here.
Itâs more modern and tidy than other parts of the city. Itâs well served by transportation routes and subway and quite frankly – itâs where real middle class life takes place. I stayed for a week in an (very strange) apartment right behind the Cevahir Mall and thoroughly enjoyed it. It was a completely different feel and vibe to Istanbul â one that felt very European/western and if you have been traveling for a while and are searching for something familiar â Sisli is the place to be!

TarlabasiÂ is part of the larger district of Beyoglu â which includes many of the hot smaller neighborhoods of the city. However Tarlabasi is more like the unwanted stepsister of Beyoglu â and because of that â I loved it. Originally a Greek and Armenian neighbourhood, diverse ethnic groups live here today: Kurds, Turks, and Roma. It also houses different social groups that are often marginalized in the city: transsexuals, sexworkers, or illegal immigrants on their way to Europe.

I happened to be staying my first week in Istanbul in Tarlabasi and it honestly seemed no different than many other countries I had been in. However when you say you are staying in Talabasi, locals do crinkle their nose and think you are a bit nuts for staying there â it is considered the ‘bad part of town’. I loved the fact that I was staying in this area where everyone immediately get tense about – I love it because in some weird way I wasn’t suppose to be there….at least not as a tourist. Yet I was. I stayed in a redesigned old 6 story house â and yes â itâs much cheaper to stay in that neighborhood, but you are easily within walking distance to all of the Galata hotspots. The neighborhood was a bit dirty and rundown â but I loved it as a cultural immersion stay. However if you are after a more tourist and upscale environment â then I would recommend staying in Galata and simply stopping by Talabasi for the Sunday market to get a feel for this ethnic and well worn neighborhood. 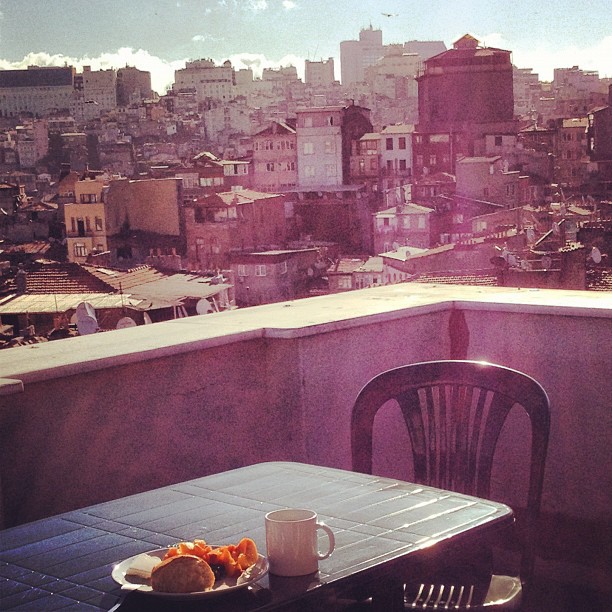 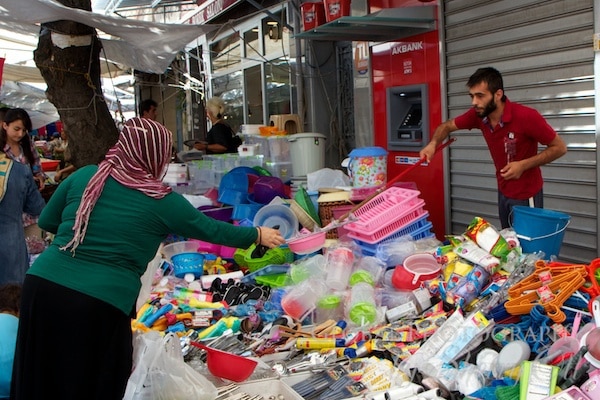 I did a brilliant walking tour through these lesser visited neighborhoods of Fener, Balat, and Eyup – and found that being able to take these neighborhoods in at a slow pace was best. There were really no tourists to speak of, but instead the streets were filled with locals and were generally pretty quiet. The neighborhood is best known as the Jewish and Greek Quarters of Istanbul. A walk through the cobblestone winding streets of this neighborhood will take you by mosques, churches and synagogues. One of the most important religious buildings is the Church of St. George, located in Sadrazam Ali PaÅa Avenue. It is the most sacred place for Orthodox Greeks â our guide described it to us as the Vatican of the Greek Orthodox religion. Inside, the church was bejeweled in gold â a sight to see. The iconostasis (wall of icons) was in the front of the church and practically hurt your eyes ot look at it! Plus â it is believed to have the cross that Jesus Christ was crucified on inside the church.

Eyup is located just outside of the city walls on the south bank of the Golden Horn and is named after Eyyub al Ensari, a companion of theProphet Mohammed, who is believed to have died here when Arabs sieged the city in the 7th century. Itâs home to one of the most sacred and religiously significant mosques in all of Turkey. However since our walking tour was during Ramadam, the mosque was so crowded that we werenât even able to get inside! Instead we sat in the main square, had coffee and talked about the history of the neighborhood further. 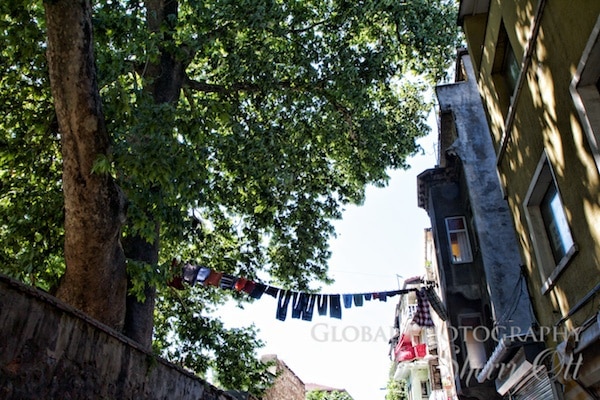 Clothes hang on the line in Balat 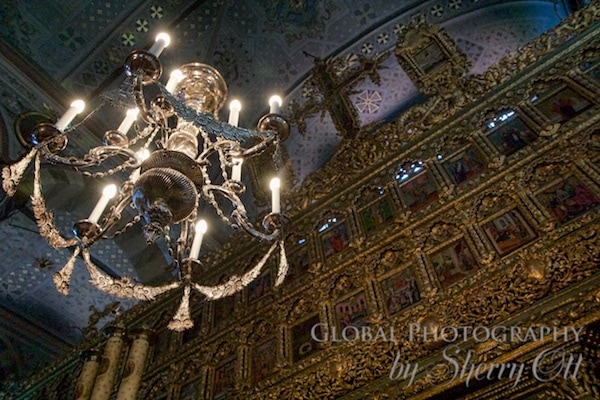 Inside the Church of St. George.Â Â Iconostasis in background. 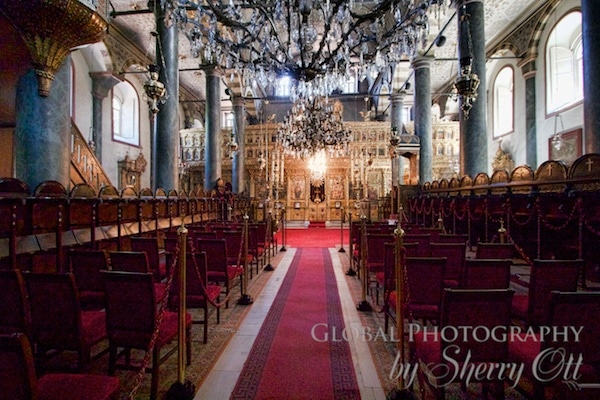 The ‘Vatican’ of the Greek Orthodox religion – Church of St. George in Istanbul 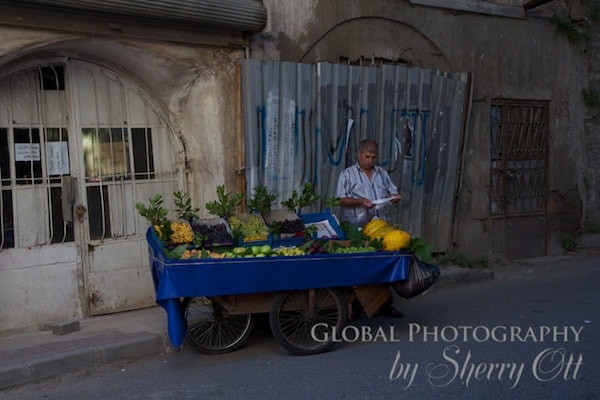 Kadikoy is one of the fastest growing districts in Istanbul for the last 25 years, it has areas of a great deal of shopping, fine dining, and entertainment making it popular especially for wealthy local people. They have nice promenades along the Bosporus â and great views of the European side of course. Youâll also be greeted by lovely food markets where you can do all of your shopping for dinner. This neighborhood definitely has a more local feel to it. Sure â it has a few sites, but mostly itâs just a functioning middle class neighborhood â a super place to really immerse yourself and less expensive than the European side. And since itâs a transportation hub, itâs quite easy and cheap to get to the European side of Istanbul to see all of the tourist sites in Sultanahmet. 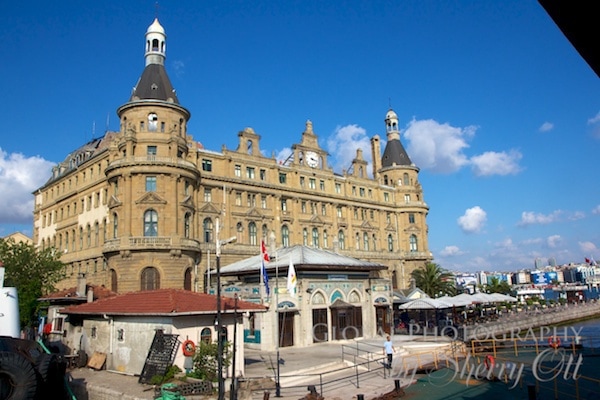 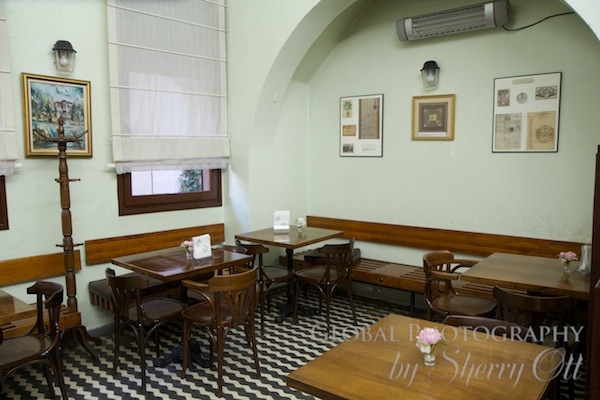 These four islands once served as exile islands (for naughty Princes!) for the Ottoman Empire. Situated in the Sea of Marmara parallel to the Asian coast, the Princes’ Islands are accessible by ferry from both the European and the Asian sides of Istanbul. If you are looking for a little peace, quiet, and relaxation on your Istanbul travels then be sure to escape to these beautiful islands for a day – or two! Itâs a one hour ferry ride and when you arrive at the islands you will be treated to quiet environments, good seafood, and relaxation. There are no cars allowed on these islands so all wheeled transportation is conducted by horse and buggy. If you do during the week, youâll only find a handful of people, but on the weekends in the summer many of the local Istanbul residents escape the city and come to the islands. I dream of going to Princes Islands and staying for a few weeks to simply wind down and write. It would be a perfect place to write a novel and hide away for a bit while watching the twinkle of Istanbul in the distance. 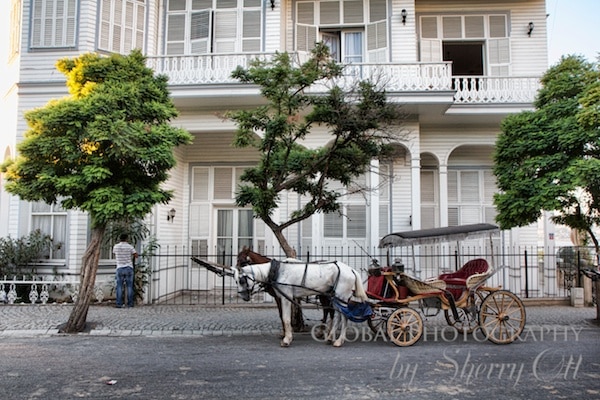 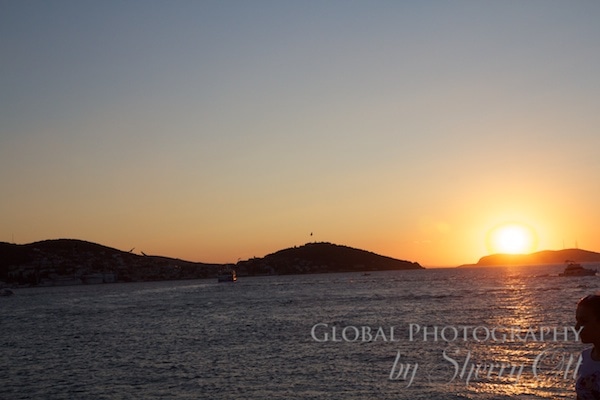 You have a lot of choices â do you want to be near the sites, near locals, near religion, on a different continent, on an island, or in the ‘bad part of town’? Â Maybe like me youâll want to move around a bit and get the feel for multiple neighborhoods. But you canât really go wrong anywhere in Istanbul â itâs a diverse, energetic city â and so are itâs neighborhoods.

What are your favorite neighborhoods to stay in while in Istanbul and why? 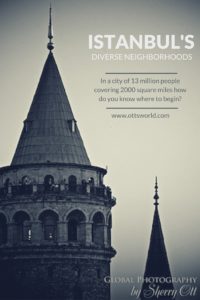 53 Responses to "Istanbulâs Diverse Neighborhoods â how to choose?"