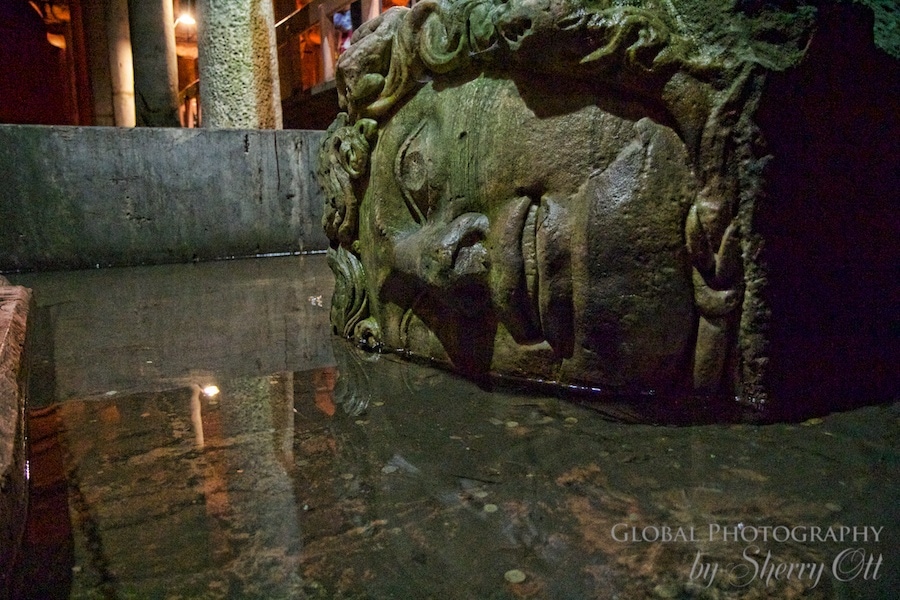 A sideways glance from the mysterious Medusa in Basilica Cistern

I feel beads of sweat roll down the nook of my back, and I think why did I come to Istanbul in July again? Maybe visiting this crowded city in the heat of the summer wasnât the best idea â but Iâve never been one to let weather stop me from visiting somewhere. After all, seeing how locals adjust to the weather is one of the things I love about cultural travel. When I lived in Vietnam, my favorite time to really observe the Vietnamese people was during rainy season.

I use my scarf to wipe off the beads of sweat that have formed on my arms and re-adjust my hat to try to avoid the intense rays of sun directly on my face. Iâve been in Turkey for 5 weeks and I still have not adjusted to this penetrating heat. The air is thick, the unrelenting sun beats down in the cloudless sky and most days I do as the locals do and stay inside during the day and come out in the early evening when the winds seems to pick up and there is some relief in the air. But today is different â Iâm out on the streets making my way to one of the coolest (temperature-wise) tourist sites in the city â the Basilica Cistern.

This cool underground oasis also goes by the Turkish name Yerebatan Sarnici. Â It is a sunken water cistern dating back to 532 built by Byzantine Emperor Justinian. Itâs entrance is very near the Hagia SophiaÂ and can normally be noticed only by the line that wraps around outside the small building on the street. It opens at 9AM in the summer and this is probably the only time when there isnât a line.

I stuffed my sweaty self into the crowded tram and road over to Sultanhamet where all of the vendors were opening their shops and beginning to prepare for the onslaught of tourists. I walked right into the Basilica Cistern promptly at 9AM and paid my 10 lira for a ticket and started to descend the staircase. With every step down the air became cooler, it was nature’s air conditioning and I wondered to myself if there was a time limit that I could be down in the cistern. 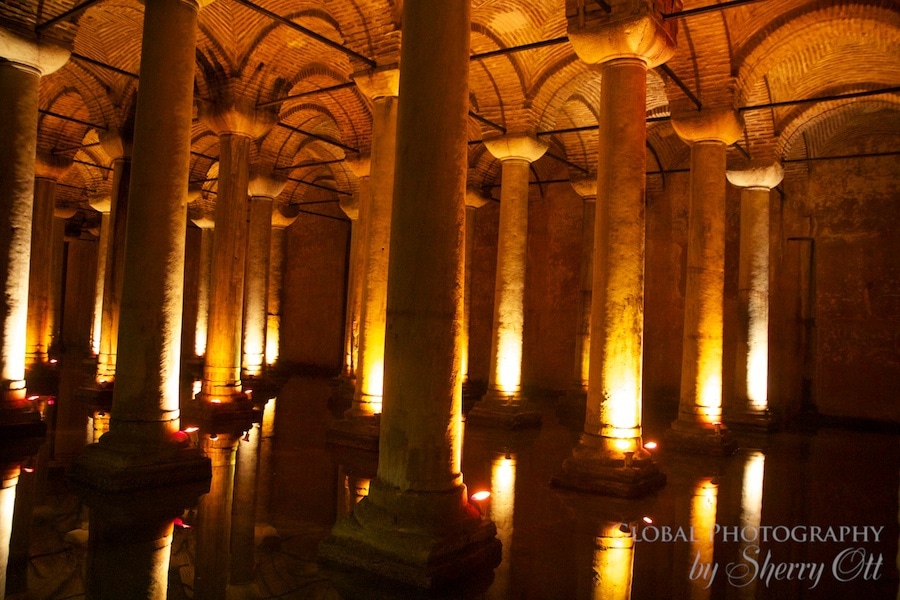 Columns of the Basilica Cistern

But soon my attention to the cool air was diverted by the scene in front of me â 336 columns arranged in 12 rows seemingly glowing from the mysterious lighting and reflections off the water they stood in. I had never seen anything like this before – a true work of architectural greatness from ancient times. Wooden platforms had been built to hover above the water level so that people could explore deep into the corners of the subterranean âpalaceâ. The platforms replace the old boats that used to lead people through the cistern years ago.

If you look closely you could even see giant carp swimming around in the shallow water which had a red glow thanks to the mood lighting of the columns. I watched the carp for a while thinking how strange it would be to have this underground watery palace as your fishbowl. 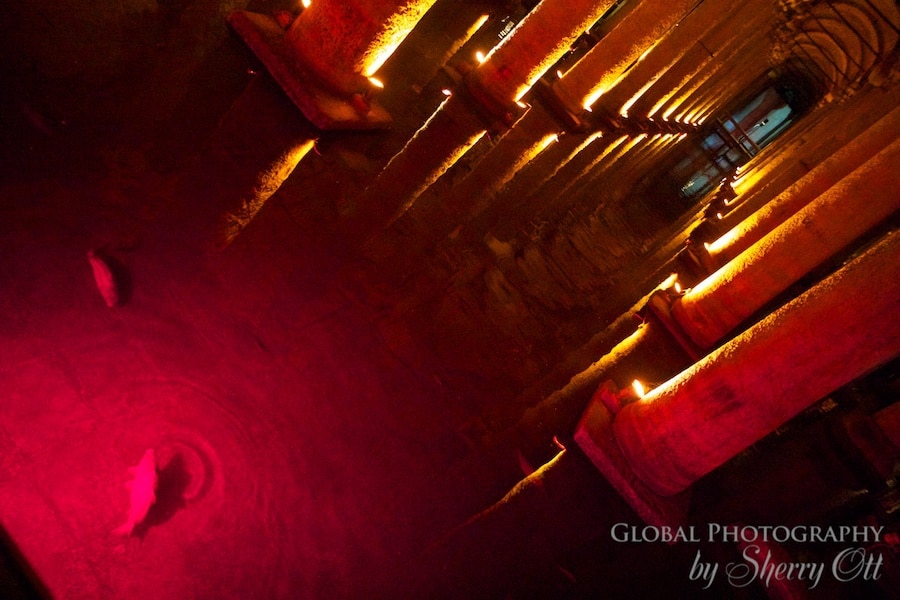 Carp swim in the eerie waters 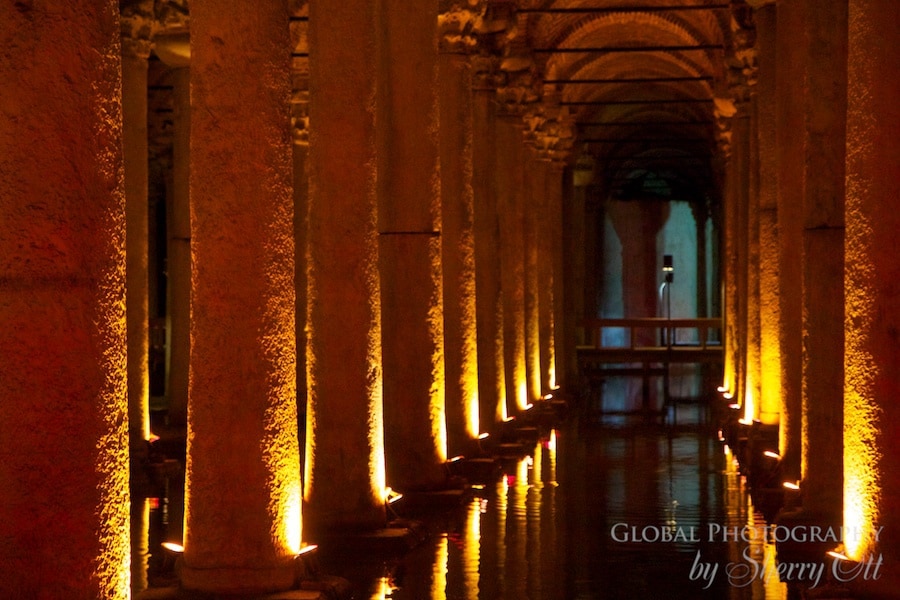 Columns are lit show just how vast the space is underground 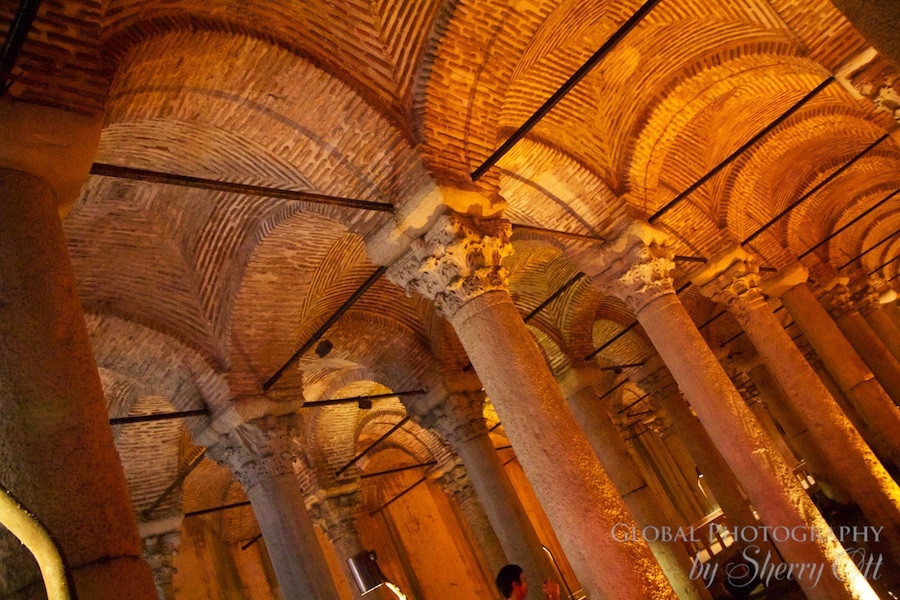 Ceiling of the Cistern

Photos in the dimly lit cistern are hard to come by since a flash really ruins the effect â but I tried to represent it the best I could with my low light lens. As I snapped photos, behind me the stairwell was filling up and depositing lines of tourists into the base of the cistern. I realized how lucky I was to get in early. They all filed in eager to see the mysteries of this watery under-world â two unexplained Medusasâ heads used as column bases. Â The heads were placed Â back in a far (northwest) corner of the cistern. The origin of the two heads are unknown as well as the strange sideways and upside down placement. The story has it that the large stone heads are oriented sideways and inverted in order to negate the power of the Medusaâs deadly gaze, however it is also thought that one was placed sideways only to be the proper size to support the column. 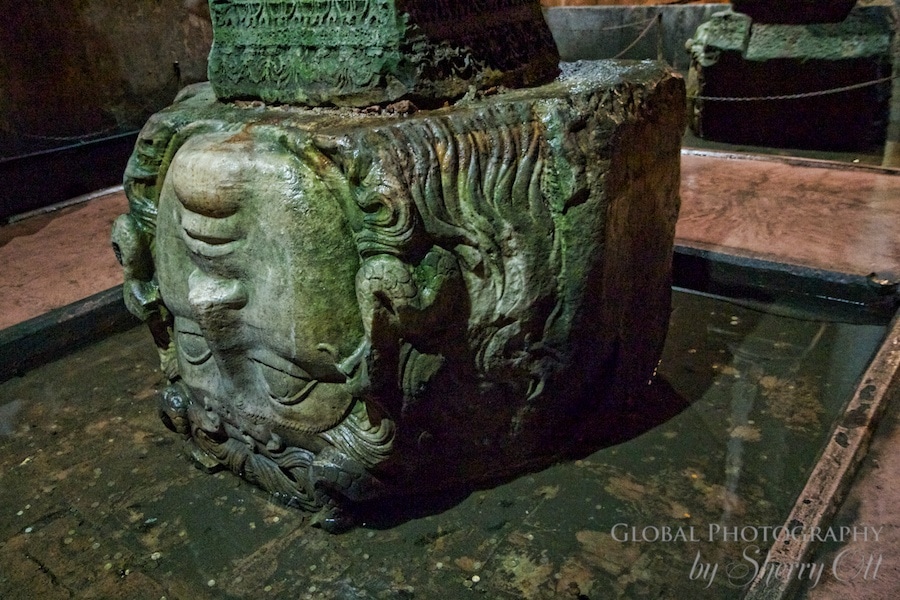 The inverted Medusa head is a strange site in the cistern

Tourists line up to see the mysterious Medusa 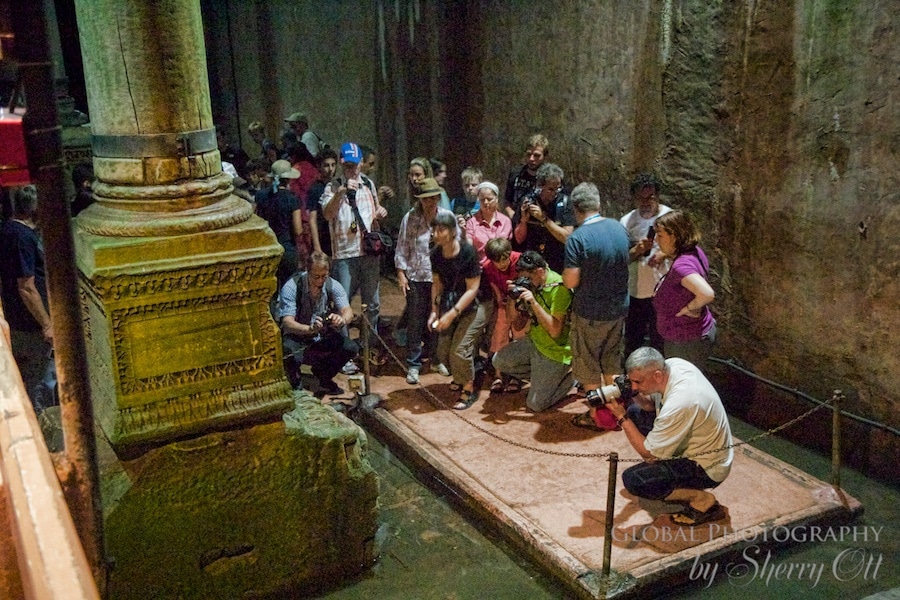 Tourists crowd around Medusa to snap a photo

The tourists made a beeline for the heads and I tried to make it there before the big lines formed. I tempted fate and stared directly into Medusaâs sideways eyes, yet I didnât turn to stone, so maybe the story of their placement was valid after all.

I spent a total of 40 minutes down in the cistern enjoying the cool air and occasional drops of water from the ceiling. But I had to go back to the surface at some point and face the heat of Istanbul again. 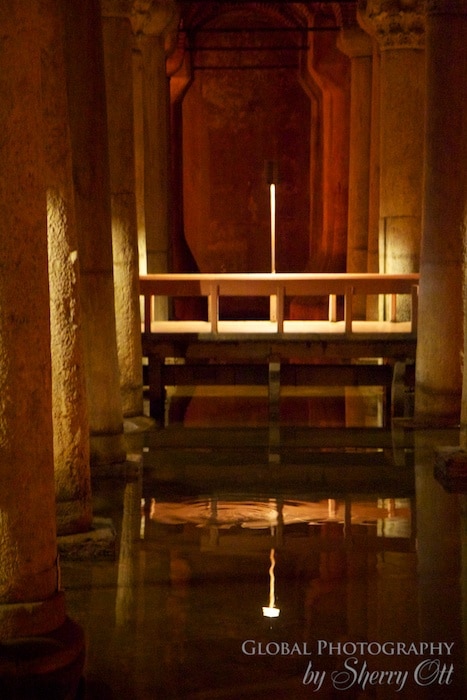 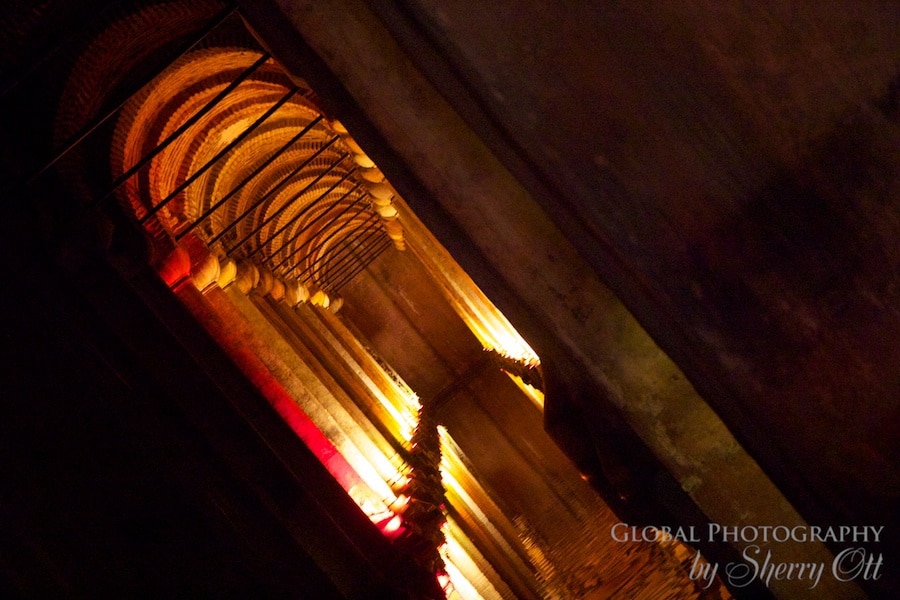 17 Responses to "Istanbul’s Water Under World"