The Food of Lebanon

The Food of Lebanon

Even in times of peace in Lebanon there is still a war raging. Lebanon battles itâs Arab neighbors for the title of âCreator of Hummusâ. They even went as far as trying to copyright it! This battle has raged on for years, and still no real resolution as to who the real creator of hummus is. In May 2010, the Guinness World Record awarded Lebanon with the largest dish of hummus in the world. The winning dish, cooked by 300 cooks in the village of al-Fanar, near Beirut, weighed 10,452 kg (22,994 lbs, equal to 11.5 U.S. tons). Yes, thatâs right, the Lebanese are serious about hummus; actually they are serious about food…period.

Mediterranean Food Origin is Shared Between Many Countries

This fight over hummus surprised me considering I had always thought Greece was the creator of hummus. After all, itâs whatâs on every Greek restaurant menu. However my time in Lebanon taught me something very important; hummus, tabouleh, dolma, and falafel are simply Mediterranean food. And since Lebanon is on the Mediterranean then food in Lebanon is also dominated by these staple dishes. 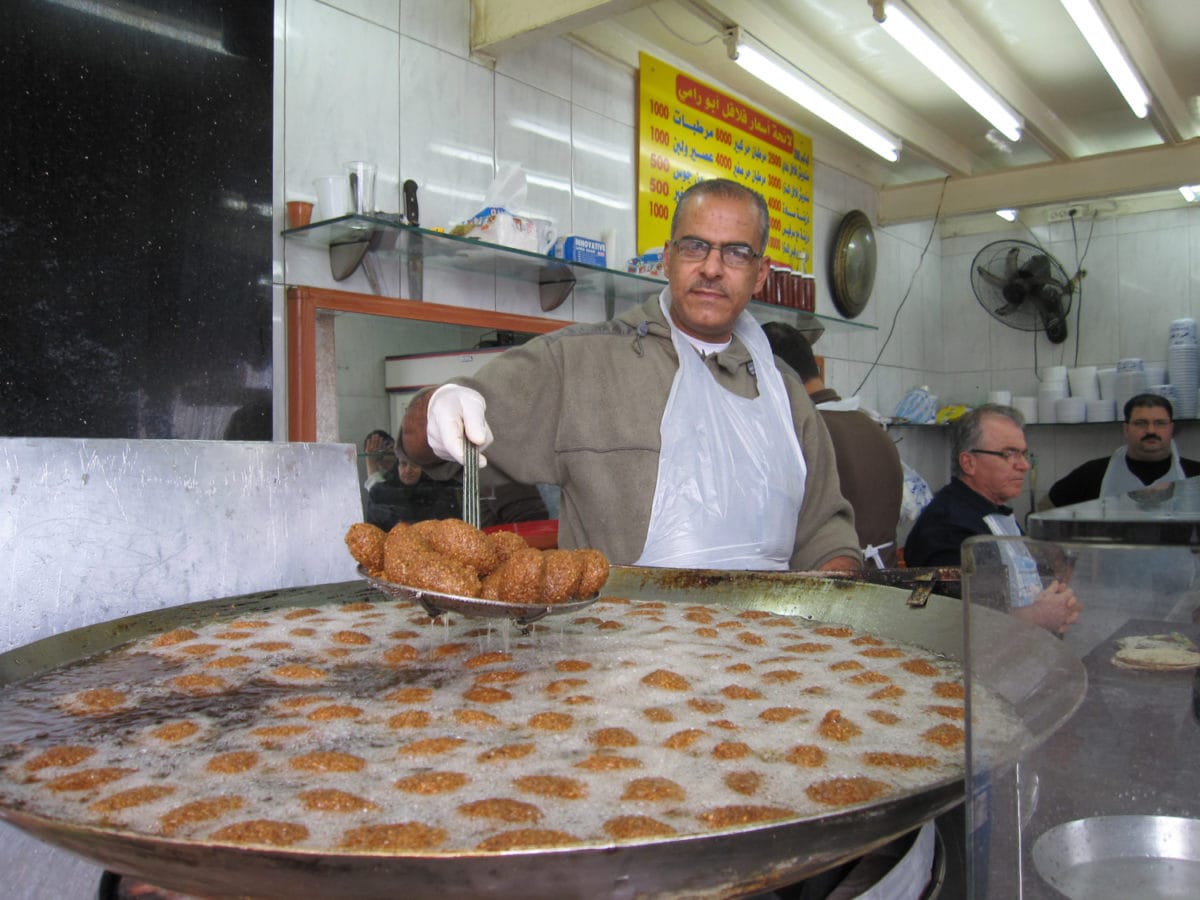 When I arrived, I clearly wasnât very well versed in Lebanese food, but many of my foodie friends such as Alison from Cheeseweb and Lisa from LLWorld Tour had raved to me about Lebanese food, so I was eager to try it. Even though my host mom, Mira,  told me she didnât cook much, I was still able to get a taste of daily cooking in Lebanon thanks to her kind neighbors. They brought dishes by daily for me to try; what treatment! If that wasnât enough, I was also often invited to dinner at peopleâs homes and treated like a visiting child from college getting showered with attention and food. I was even sent home with leftovers!

The Lebanese, like Jordan, have that incredible ‘guest culture’ that makes me love the middle east.  They want you to love their culture and their country.  And they know the fastest way to someone’s heart is through their stomach!

Tabouleh, hummus, falafel, and shwarma are the staples that we are all familiar with and most of us have probably tried before. To be in the land where these items were originally created is a true treat. One of the key ingredients that I would see over and over in Lebanese food was mint. It dominated everything from salads to sandwiches giving everything a fresh taste. A simple sandwich of cucumber, tomato and mint was common for lunch.

Fattoush was also a common salad eaten weekly. It was simple, fresh, and green; filled with cucumber, parsley, tomato, and green onions. But my favorite was of course the falalfel with itâs tangy white sauce and handfuls of mint.

Much like Jordan, bread was a dominant player in everyday food of the Lebanese. It came in all shapes and sizes, but my favorite was the kaâak bread. It immediately caught my eye the first day I was walking around Beirut when a bicycle vendor was parked by a big traffic circle with stacks of something that looked like handbags hanging from hooks. Upon closer look, I realized it wasnât brown leather handbags, instead it was bread! Sesame covered bread that was puffed up and shaped like a handbag.

Ka’ak refers to a bread made in a large ring-shape and is covered with sesame seeds. Fermented chickpeas are used as a leavening agent. Kaâak is meant to be eaten warm, hot out of the oven; I preferred to have some cheese slathered on the inside of the hot steaming bread which made for a delicious snack.

The first morning in Beirut my host mom ordered manoushe for breakfast; it was my first of many manoushe that month, but I enjoyed every one of them! Manoushe is a thick, slightly sweet bread with olive oil and zaâatar. Zaâatar is the commonly seen spice in the Middle East â a mix of dried herbs (thyme, sesame seeds, oregano, and sumac), that you could smell from far away.

The manoushe was quite often served with lebne and za’atar for breakfast.  This delicious morning meal was my go to choice!  Lebne is a tangy yogurt cream cheese that you can spread on anything! It’s made by simply removing the water/liquid from regular yogurt by hanging in a cheesecloth from the sink for a day or two.  Once again, the manoushe was best if it was warm out of the oven coupled with a fresh squeezed glass of orange juice for breakfast.

For those with a breakfast sweet tooth, then you can opt for knafeh. I quickly learned that the Lebanese knafeh was vastly different than the Jordanian knaffe. First of all, Jordanians eat knafeh for dessert only, but the Lebanese eat it for breakfastâ¦in between sesame buns.

Imagine a piece of cheesecake, dipped in honey and then put between two sesame seed hamburger buns. Sounds like a stellar breakfast âright?! The Lebanese put the knafeh between bread to cut the uber sweet/rich taste of the knafeh alone. I tried the Lebanese knafeh one morning and it was certainly a treat.  I don’t even want to know how many calories are in knafeh!  Even my American sweet tooth felt this was quite a lot of sugar for breakfast! Lebanese coffee was absolutely necessary with this sweet breakfastâ¦oh darn.

Cheesecake between a sesame seed bun…what a way to wake up!

Beans are also a big staple in Lebanese food. Foul (pronounced fool), a bean dip, was a favorite as well as hummus. However, I did get the chance to try a new bean dish I had never heard of before â Fateh. While in Tripoli my host took me to a restaurant that was known for itâs foul and fateh. This was my first time eating fateh and it was a pleasant surprise to by tastebuds.

It was one of the few foods in Lebanon you actually ate with a spoon and not with bread. Instead, the bread was actually at the bottom of the bowl and then covered with yogurt, melted butter, garbanzo beans, and roasted nuts on top; served slightly warm. The buttery warm taste was delicious. Reallyâ¦can you go wrong with butter? I think not. 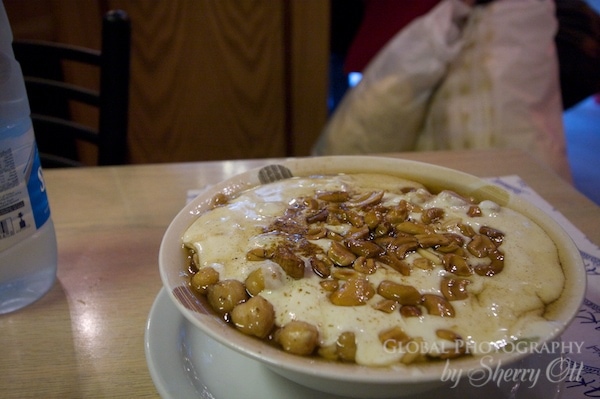 Fateh – yogurt, nuts and butter – don’t knock it until you try it!

Of course I already mentioned that king of spices in the Middle East â zaâatar, however one of my favorite things about Lebanese cooking is that they use spices differently than we do in America. They tend to use spices that we only reserve for special occasion meals of desserts in their everyday meals. Specifically youâll taste a hints of cinnamon, nutmeg, and cloves in most of their dishes. I especially was fond of the kebbeh spiced meatballs. Every time I bit into one it reminded me of American Thanksgiving! 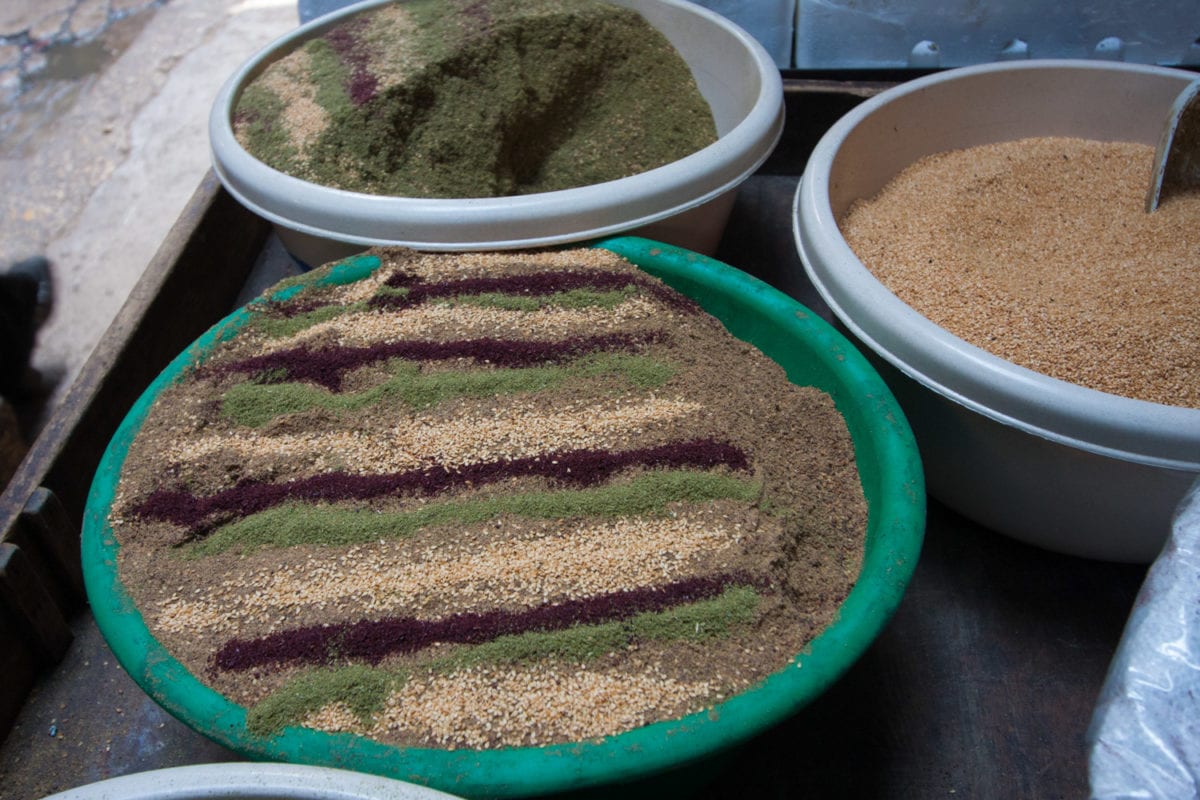 In general, the Lebanese snacked a lot with little small plates (called mezze) of these famous dishes that everyone shared around the table. A typical Mezze may consist of salads such as the Tabouleh and Fattoush, together with dip such as Hummus, Baba ghanoush or Moutabal, Kebbeh and finally stuffed grape leaves.

But one other thing that I fell in love with in the snack category was brought to your table when you ordered a drink in a bar â carrots. I know, carrots donât sound too exoticâ¦but they would bring out a little glass of carrots in a lemon juice and set them on your table next to a bowl of nuts.  You can have a beer and carrots…sounds strange, but it’s much healthier than peanuts.

Lebanon was full of sticky sweet pastry shops, especially in Tripoli. As I walked around the souks in Tripoli I was offered plenty of samples of these sweet, nutty concoctions. I was also offered cakes which had hints of rosewater in it giving it this unique taste that I immediately fell in love with. Saida also was known for itâs pastries and I returned from Saida with a plate of coconut and nugget bars that my teeth didnât like, but my stomach loved.

While in Taaynayel I had the opportunity to try a special dessert calle Meghli. Meghli is a Middle Eastern rice pudding made with rice flour and flavored with cinnamon, aniseed and caraway. Served in small bowls, the pudding is topped with blanched almonds, pistachios and pine nuts.  Meghli was not only full of yumminess, it was full of tradition.  It is served to celebrate a newborn in the family. It’s also considered a Christmas dessert with the idea that Christ was a newborn!  Regardless of traditions, I would eat this dessert anytime; I love rice pudding, so Meghli was a slam dunk for me.  I even found a good meghli recipe to make it at home.

Every country has comfort food – the food that makes you think of home and a feeling of well-being. Even though my host mother, Mira, said she didnât cook I did find her in the kitchen a few times painstakingly making shish barak.

Shish barak are dough balls stuffed with ground beef and spices and cooked in a yogurt sauce.  It’s sort of like yogurt soup and is seen as a comfort food; similar to mac and cheese for Americans.  She made the dough balls by hand in a process that reminded me of Italy as I watched her fold each one just right.  The wee little tortellini like dumplings can take a bit of time, what with the rolling, shaping, crimping and baking…and Mira stopping to insist to me that she indeed did not cook…while her hands were covered with flour.

The food of Lebanon lived up to itâs reputation for me. But I think the best thing about my month of eating is that 80% of it was with locals in their homes. I only went to restaurants a handful of times and quite frankly the local meals were by far the best!

If you are looking for a great foodie destination to travel to, then put Lebanon on your list!  And find a Lebanese mother to adopt you for a while – I have a few that would be willing to cook for you non-stop!

What are your favorite Lebanese dishes?

17 Responses to "The Food of Lebanon"