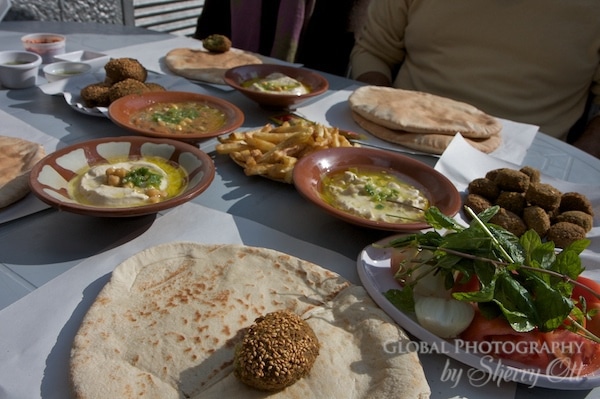 I sat on the couch and my stomach grumbled wondering why in the hell I hadnât given it anything but a thin piece of bread, oil, thyme and an abundance of coffee for the last 6 hours. My body was quickly learning that Jordan food portions were not quite as large as I was used to. My stomach was angry at me, it was calling out to me wondering why I was torturing it. This is the normal time of day where I feed it a sandwich followed by a Diet Coke, some chips, and of course some sort of cookie or sweet; but instead it received nothing.

I actually lost weight in Jordan thanks to the food and the cultural food habits of Jordanians. Gone were my bad habits of snacking on sweets, or grazing while I worked. Gone were the days of me controlling my schedule of when or what I was going to eat; when living with a local family you are at the mercy of how they run their household. This left me in hunger pains at time as I went through the process of âfood shockâ. Itâs not much different from culture shock; itâs physical, emotional, and painful at times! Just as one adjusts to culture shock or re-entry shock when traveling, your body and mind also has to adjust to food shock.

In America we generally eat 3 standard meals a day at 8AM, noon-ish, and 7PM; they are about equal in size. There are normally some snacks in the afternoon too. However in Jordan the eating times seems to vary quite a bit with my host family. We had a very small breakfast of bread, oil, zaâatar, and Happy Cow cheese around 8AM. Then there was a very long wait until lunch around 3:30PM. The lunch is normally the largest meal of the day with rice, chicken, and bread. Then the rest of the day was sort of a free for all; I never really knew when I would eat again or what it may be. It might be some left-overs from lunch or maybe one of the kids would go out and bring back shwarma around 9PM, or sometimes there was some babaganoush type dip or Iâd make myself a cheese and tomato pita sandwich. And when I say cheese, tomato, and pita â thatâs exactly all there was. Donât get visions of lettuce, mayo, mustard; itâs definitely no American-type sandwich. 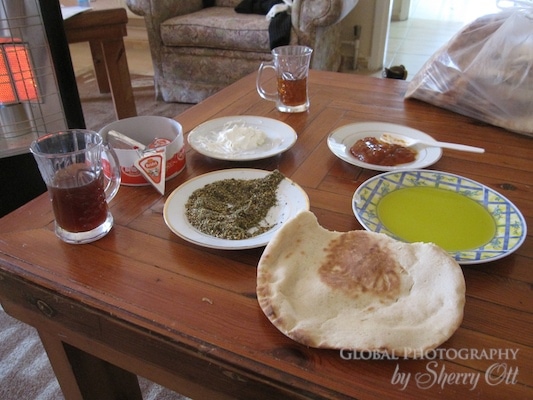 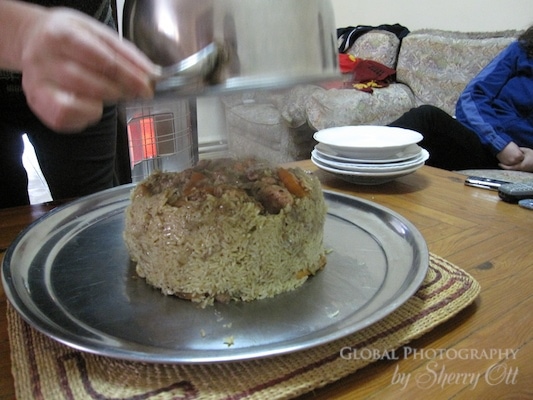 An upside down Rice and Chicken dish for ‘lunch’

It seemed to be either feast or famine â and Jordanians were used to that; but I wasnât! Some days there would be huge amounts of food provided to me, and some days there was very little. I never knew what to expect! I certainly didnât starve, but I did struggle with the uncertainty.

After a week of trying to understand the eating schedule and frequent hunger pains, I finally learned when food was put in front of me â I should eat as if I wasnât going to eat again that day! I had to really train myself to accept the fact I wasnât in control of when I was eating, the portions, or what I was eatingâ¦this is the Food Shock process. Instead I (and my stomach) learned to appreciate it whenever I had food and ate whatever was made in satisfaction.

During my month in Jordan, I witnessed many things about food and eating that were culturally foreign to meâ¦and quite frankly odd. I found them amusing and consistent throughout Jordan. 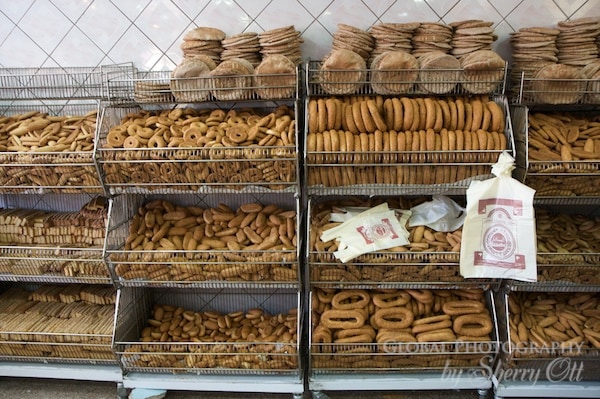 Bread came in all forms

Rarely do Jordanians use utensils. They had one primary utensil â and that was bread. Itâs fascinating to watch a Jordanian eat; they rip off a piece of bread/pita and then will pinch the food up with the bread. Imagine if you had just killed a bug on the floor and you wanted to pick it up and throw it away. You get a Kleenex and pinch it up off the floor. Itâs the same idea â but you put the whole piece of bread and pinched up food into your mouth! In addition to pinching the food, they also scooped the food up with bread as if it was a shovel. They tried to teach me numerous times how to quickly fold the torn piece of bread into a spoon like form and then scoop. Many times you took another little ripped piece of bread to push the food into the scoop. Eventually I got used to this, and the fact that there were few utensils to wash was a nice by product of the food culture!

Meat has a different meaning in the Middle East. I learned this when I was eating chicken and rice with the family and Rawan asked me, âDo you eat meat?â I looked at her somewhat confused and repeated, âDo I eat meat?â as Iâm pinching up a piece of chicken with my bread. âYes, of course I eat meat.â After a bit more clarification I learned meat is only considered beef, lamb, and goat. Chicken is different and is not considered meat. Important to know if you are vegetarian.

Finally, a meal consisted of one dish and bread. There rarely were different choices with a variety of vegetables or side dishes.

I did find some food that was definitely new to me and unique to Jordan and the Middle East. Then I also found familiar food such as bread â but the quantities and types of bread consumed were new to me! I of course tried all the food, but here were some of my favorites

Lamb Brain – I ate itâ¦every delicious last bite of it! It was served with lemon sauce and pine nuts and yes, it looked like a brain. However it tasted more like pate and was eaten with bread of course! 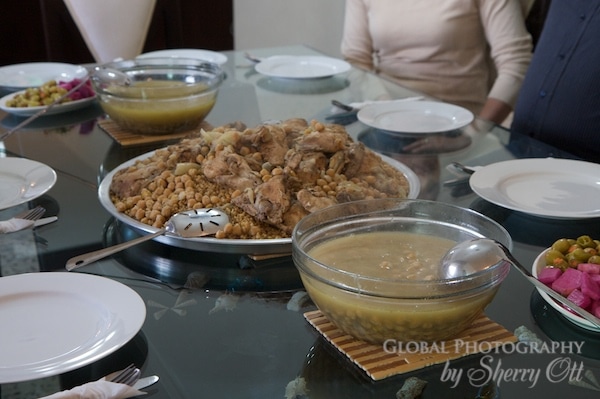 Pickled Everything â It seemed that Jordanians eat pickled products like we eat potato chips. At every meal there was normally a little plate of picked olives, turnips, and carrots which people munched on as a side dish.

Spices â I loved Jordanian cooking because they used spices on a daily basis that we seem to leave for only certain types of food; specifically â cinnamon. Cinnamon and other âautumn likeâ spices were used in every day cooking. Cardamom and nutmeg or cloves were also frequently used in main dishes. But one of my favorite new tart spices was sumac; put it on fried cauliflower and it was heaven. However the king of spices devoured in great quantities in Jordan was thyme. It wasnât simply thyme, but a special mixture of thyme, sesame seeds, sumac, and salt called Zaâatar. There were whole stores dedicated to Zaâatar mixtures. Typically it was eaten with breadâ¦no surprise there. You dip your bread in olive oil and then dip it in the Zaâatar; eaten at breakfast, dinner, or any time of the day. 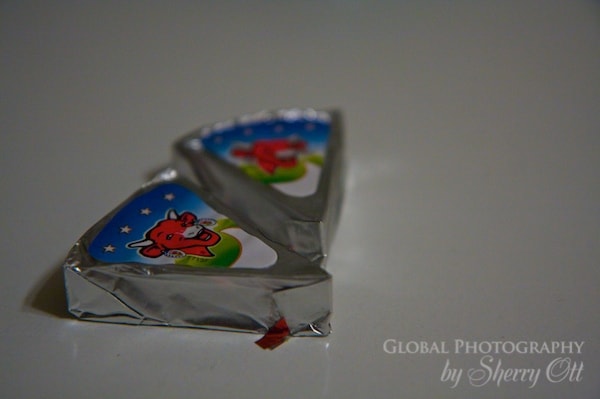 Happy Cow Cheese – this familiar brand of soft processed cheese is found everywhere in the Middle East. Itâs a staple item and used much like butter is for us. One of my favorite new things to snack on is pita bread with smeared Happy Cow cheese and apricot jelly; a quick sandwich snack.

Beans â youâll find beans as a main staple in Jordan dishes â however more often they are not in bean like form, but they are blended smooth so that you donât even know you are eating beans! My favorite bean dishes were of course falafel, foul, and hummus. 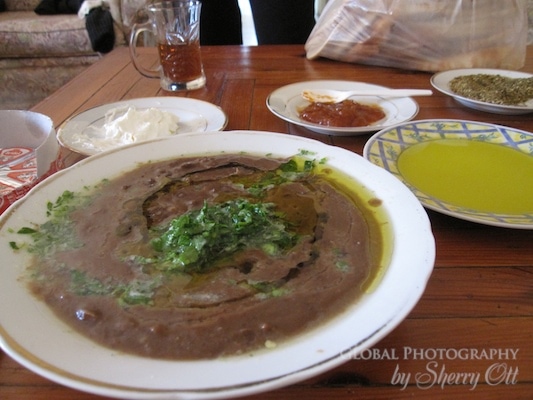 Foul…one of my favorite bean dishes!

After introducing all of this Food Shock into my system, the family graciously accepted my offer to make them an American meal one day. I decided on a menu of chicken casserole (complete with macaroni, processed cheese, and cream of mushroom soup), a salad, cauliflower, and a homemade pan of chocolate brownies! And of course I made sure everyone had a beverage in front of them when we ate too!

More about Jordan Food and Culture

Some Favorite Cooks I met in Jordan: 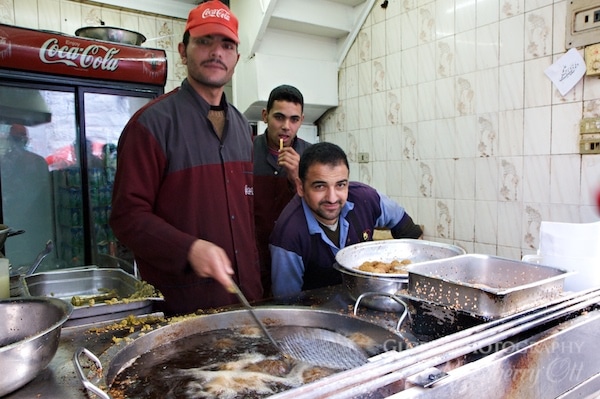 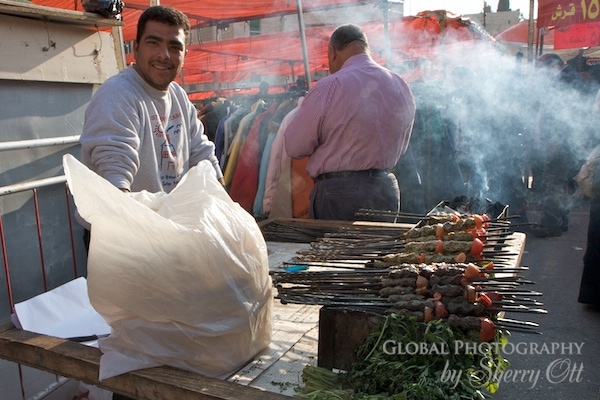 Skewers at the Friday Market in Amman 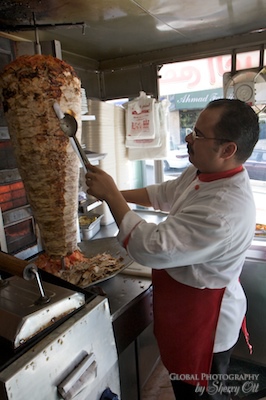 What’s your favorite food in Jordan?