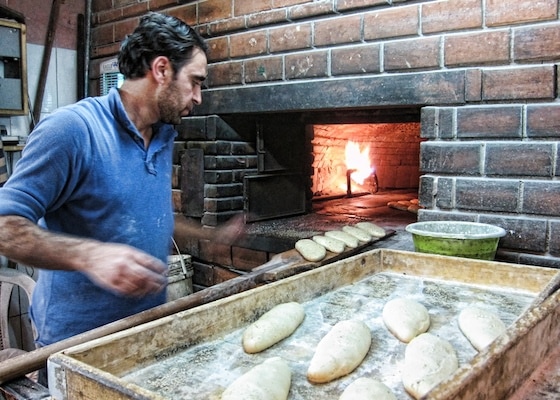 It doesn’t get any fresher than this

When you get those late night hunger pains, attacking your insides as if they miners in an empty cavern; when you can hear the echoing grumbles of your insides â what do you do? In Amman you go to Salah El-Din sandwich shop.

At 10PM on Thursday night I had my pajamas on sitting at my host familyâs home. We were all chatting and all of a sudden they asked me if I wanted to go downtown for a sandwich. I was a bit confusedâ¦âA sandwich, right now? I have my pajamas on.â I was convinced this was a âlost in translationâ type of conversation, but I was wrong; they really wanted to go for a sandwich. What made this even more surprising is that the family lives in Fuheis a town outside of Amman; basically a 30 minute drive to downtown if thereâs no traffic.

As much as I wanted to simply call it a night and go to bed, I felt like this was one of those opportunities I should seize; however I wasnât going to seize it in my pajamas. I quickly changed and 5 of us walked out the door to go get a sandwich.

Saif (the husband of Rawan) was not only our driver but my personal tour guide as we hit the Amman traffic circles in reverse order. One of the first things I learned about Amman was that the traffic circles were numbered starting with circle 1 near downtown and the further you go out the higher the numbers go. Saif pointed out every piece of Amman landmark trivia possible as I tried to take it all in under the cover of darkness. This was really my first trip into the city so I felt like a young child pressing my nose against the window hanging on his every word. 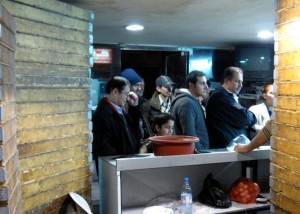 A line of men…

We finally started to get into the valley of downtown as the hills of buildings rose up around us with twinkling lights. There were many people out walking around; after all in the Middle east Thursday night is the beginning of their weekend. We pulled up and doubled parked by some cars and Dana groaned, âoh, the place is full of menâ. We had driven by the Salah El-Din and sure enough there was a line of men outside and mulling about. I didnât really know what Danaâs comment meant, but Saif started taking sandwich orders in the car.

I innocently said, arenât you all going to go inside? Thinking who in their right minds would drive all the way here and not go inside?! However I had to remind myself that I was in a foreign culture, one that I hardly understood and certainly didnât understand the intricate balance of men and women interactions. Dana, Etedal, and Rawan had decided to stay in the car. However the adventurous side of me wanted to go in; after all, I had changed out of my pajamas to go on this trip, so I might as well get out of the car if it was acceptable! I asked the women if I could go in with Saif and they said sure that I would be fine because I was clearly western and no one would give me any problem.

That was all I needed, so I grabbed my camera and got out of the car. We walked into the small take away restaurant called Salah El-Din and I was the only woman there currently. It didnât really bother me at all, mainly because I was fascinated by what was in front of me. A hot brick oven and two men working in what appeared to be a very chaotic environment. The place was a little messy, but you could tell that it just couldnât keep up with the amount of people coming in. I asked Saif if I could take some pictures of the place and he quickly as the man behind the counter who wiggled his hands in a fashion with I thought meant no, but Saif turned around and said sure â no problem. Ah â the joy of foreign body language. 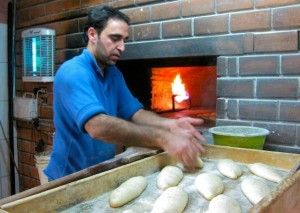 I took a couple of shots of the counter, and then the man motioned for me to come behind the counter to take more photos. I once again didnât think that I understood what he was trying to say to me, but he kept on motioning for me to come around behind the counter, so finally I decided to follow his instructions. All of a sudden, there I was on the other side of the counter next to the guy shoveling break in and out of the oven. What a great vantage point; plus I had everyone looking at me..the crazy female tourist with the camera. Itâs a good thing I decided to change out of my pajamas.

Saif ordered 8 sandwiches. The man handed him 8 loaves of bread as they came right out of the hot oven, 8 cheese triangles, a bag of thyme, and 8 eggs which appeared to be really dirty. I was a bit confused about the whole situation; and why we were they giving us a raw egg? Saif quickly explained that the egg wasnât raw and that it had been baked in the oven…whew.

We walked over to a rather dirty counter and we sat down our bread and picked up one of the many knives laying randomly on the counter. Saif then proceeded to show me that this was a âmake your ownâ sandwich shop. We were given all of the ingredients â now it was up to us to put them all together!

Video of Saif teaching me how to put together the perfect sandwich:

I was fascinated with the process, quickly I jumped in and started helping out; I felt like a local. And for all purposes, I was as there werenât any tourists in the place. After the fact when I tried to look it up on Google I realized that the place was so âlocalâ I canât even find it on a Google Search. We quickly put together our 8 piping hot sandwiches and then grabbed 5 cups of tea and took it all to the car for our late night feast. 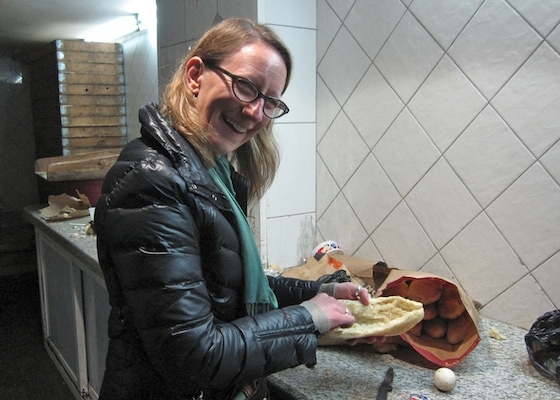 Me making a few sandwiches

Let me tell youâ¦this fresh out of the oven self service sandwich was better than any egg sandwich I had ever ordered in NYC. Pure yumminess. Plus to top it off â 8 sandwiches and 5 teas cost us 6 Jordanian Dinar (aprox. $8US).

We drove around downtown Amman some more and did a bit more site-seeing, before heading back to Fuheis. I was overjoyed with our impromptu sandwich outing; being exposed to places like that; a place I wouldâve have never found on my own, is what travel is all about to me. More than ever my travel style is changing; itâs not about seeing a ton of places to tick off a list. Itâs about slow travel; integrating into the culture and being local. My host family and I were off to a great start!