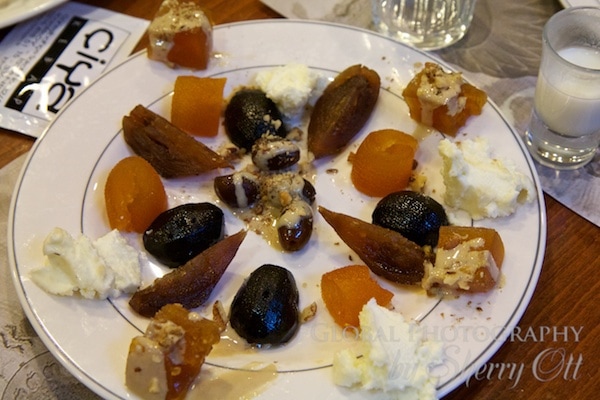 I look at the walnut at the end of my fork and inspected it closely. It wasnât just the nut part that we normally crack the shell to get to â but instead it was the whole shell poised on my fork prong. How in the world did the Turkish make this impenetrable nut into a soft yet firm dessert that tasted so good? And most importantly â WHY did they decide to make a walnut shell into a Turkish dessert?

Hulya, our Turkish food expert and guide, simply answered my âwhyâ with , âThe Ottoman Empire and Sultans had a lot of people who could do time consuming work.â She went on to explain that the walnut had been boiled about 5 different times over the course of days in order to get it to this soft, sweet, consistency. In Turkey they call it Ceviz Macunu which means some variation of green walnuts in syrup.

I stared at it further in amazement at how something that we treated as waste, a walnut shell, could be so good. But this wasnât the first time that Turkish food surprised me – the Turks were masters at taking foods that we think we know and using them in different ways. 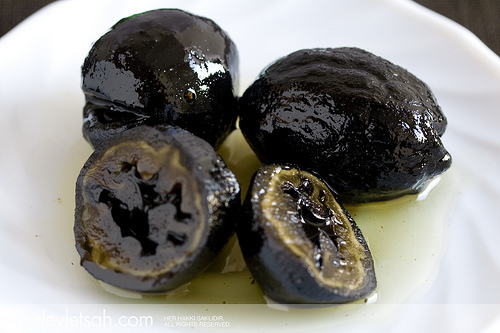 âWhatâs the most unlikely thing you can ever think of as a dessert?â Hulya asked as my fellow tour goers tasted the container of creamy pudding concoction she held in her hand. After a number of incorrect guesses, someone timidly said âMeat?â as if they really didnât want the word to come out of their mouth for fear that it may be true. Hulya answer yes â the pudding they were trying had chicken in it. Gaspâ¦surpriseâ¦wonderment all ensued â but the important thing is that everyone kept eating this delicious pudding surprise. 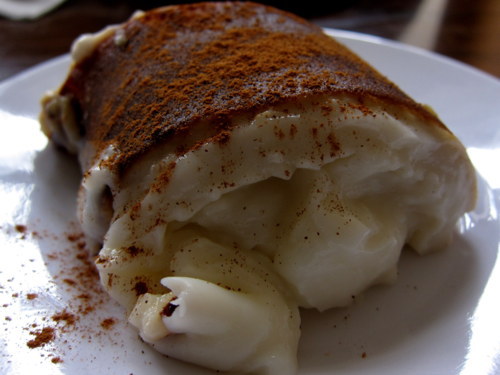 I had already tried the infamous Turkish dessert of chicken breast pudding called tavuk gÃ¶ÄsÃ¼ and experienced the shock and awe that my fellow travelers had experienced. When I initially arrived in Istanbul I heard of chicken breast pudding from Jodi Ettenberg â a foodie traveler who seeks out delicious food around the world. When I arrived in Istanbul she said that I had to try it and I was immediately intrigued by this strange combination of flavors. My friend Tahir kindly took me out to try it one evening at one of the many dessert pudding shops in Besoglu. I timidly tried the elastic pudding and to my surprise fell in love with it. The pudding had a familiar taste to it, but youâd never be able to place that taste as chicken unless you were aware chicken was in it. The most amazing thing about the chicken pudding was that the chicken was shredded so fine that it was like a thread. I couldnât even imagine how chicken could be shred up that thin â but it started with the poaching of a chicken breast, and ended up in threads with lots of effort and patience.

After I tried and enjoyed chicken pudding, I was then ready to try another strange specialty in Turkish pudding desserts â kazandibi which literally translates into âbottom of the potâ and is affectionately referred to as burnt pudding. Yet another dessert that didnât sound the most appetizing, but I figured that crÃ¨me brule was essentially burnt sugar and that tasted wonderful â so how bad could Turkish burnt pudding be? Once again the Turks took something initially the rest of the world would cringe at and made it delicious. 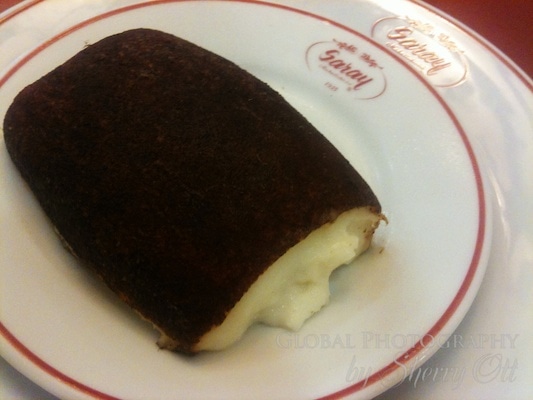 Kazandibi burnt pudding scraped from the bottom of the pan

Even the Ice Cream is Unique in Turkey!

Turkish desserts seem to be fascinated with elasticity and testing your limits of what you think is normal. In addition to walnuts and puddings, I tasted sweet eggplant, olives, and pumpkin as a dessert too. Even the traditional ice cream in Turkey doesnât conform to our expectations and is more like a version of pulled taffy rather than scooped ice cream. I found that most of the popular local desserts were some sort of pudding or custard with slightly different ingredients and stretchiness. 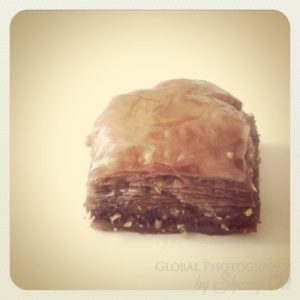 During my time in Turkey I also tried traditional desserts like Baklava, but I learned to eat them in an untraditional way. My friend Fatih took me toÂ KarakÃ¶y GÃ¼llÃ¼oÄlu â the famous baklava sweet shop inÂ KarakÃ¶y. There youâll find cases and cases of freshly made trays of baklava in different sizes and flavors to temp your sweet tooth.

My personal favorite I quickly became addicted to was the chocolate baklava. Fatih and I got an assortment of baklava and I was poised to dig in when he said, âDo you know there is a proper way to eat baklava that brings out the most flavor of the dessert?â I hesitated and was torn with simply shoving it into my mouth and trying to slow down and learn about this intriguing fact that he dangled out in front of me. The dangling worked – I chose to put my fork down and learn more.

He told me I should place the bottom side of the baklava (the gooey side) into my mouth so that the gooey side was placed at the roof of my mouth. Then I was suppose to let it sit there for a moment before I started to chew â a test in patience. This tasting ritual sounded a bit like tasting wine and decided to give it a go. I let the gooeyness dance at the roof of my mouth for a moment before I finished it off.

The result? It tasted wonderful! However I personally think it would have tasted wonderful regardless â but I continued to try to slow down and eat my baklava the âproperâ way as Fatih had suggested. 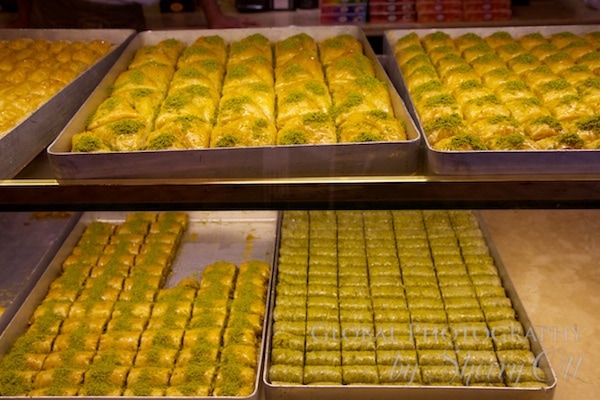 Trays of Baklava at Karakoy Gulluoglu

I love the fact that Turkish desserts push your limits and get you to look at things and eat things in a different way. After all, thatâs how you learn about cultures – itâs good to challenge the ânormalâ way of doing things. Thatâs why I travel. So next time someone offers you a meat based dessert or a walnut shell, before you say no immediately, consider for a moment that you might actually love it. Youâll never know until you try it!