A Different Way to See the Sydney Harbor Bridge

A Different Way to See the Sydney Harbor Bridge 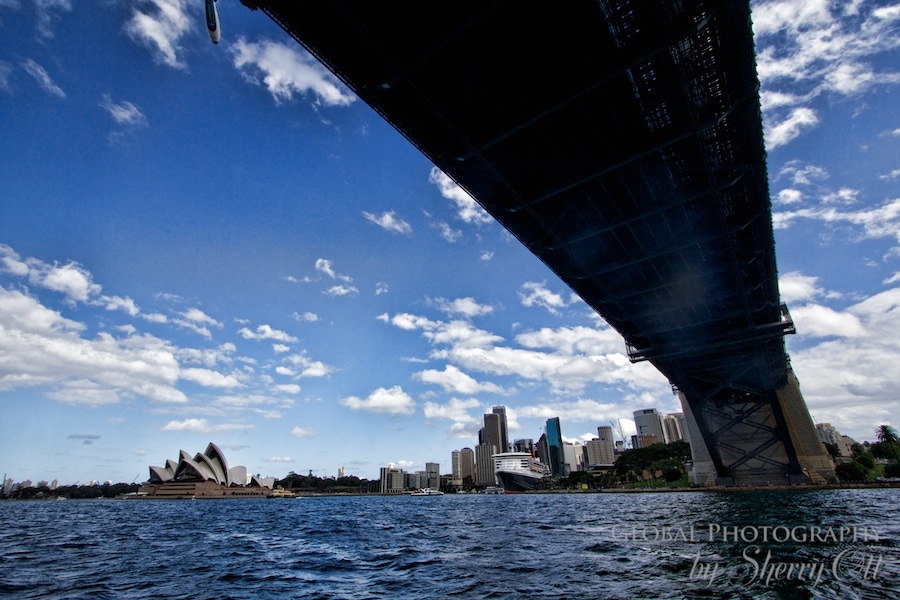 A new perspective on the Sydney Harbor Bridge

As I watched all of the little dots climb the Harbor Bridge in Sydney in the distance, I decided that I didnât want to do what all the other tourists were doing. Instead of climbing the bridge, I wanted to sail under it.

So much of Sydney culture is centered around the water and harbor. The famous opera house perched out on the waterfront, the Harbor Bridge, the ferries, beaches, surfing, and more. This was my 2nd trip to Sydney and I decided I needed to explore the water culture further this time and find unique things to do in Sydney. The best way to do that is to get out on it! And instead of simply floating along the Harbor drinking champagne like most tour options offer you; I was looking for a real experience. Thatâs how I ended up as part of a sailboat racing team doing Americaâs Cup Sailing on Sydney Harbor.

I arrived at the docks as the sleek racing boat was pulling in. There were about 9 other want-to-be-sailor passengers like me waiting to get on and join the real crew. We introduced ourselves and I was surprised to learn that many of them were Sydney residents who chose to come out and be part of the crew like me today; this made it even more of a nice type of local experience for me. As we stepped on the crew introduced themselves, took our bags to secure them below and told us to start slathering on the sunscreen â it was going to be a beautiful day on the harbor. However, this was not exactly a leisurely sail where I worked on my tan, so I pulled on my PrAna rash guard/sun shirt over my swimming suit and got ready to race. 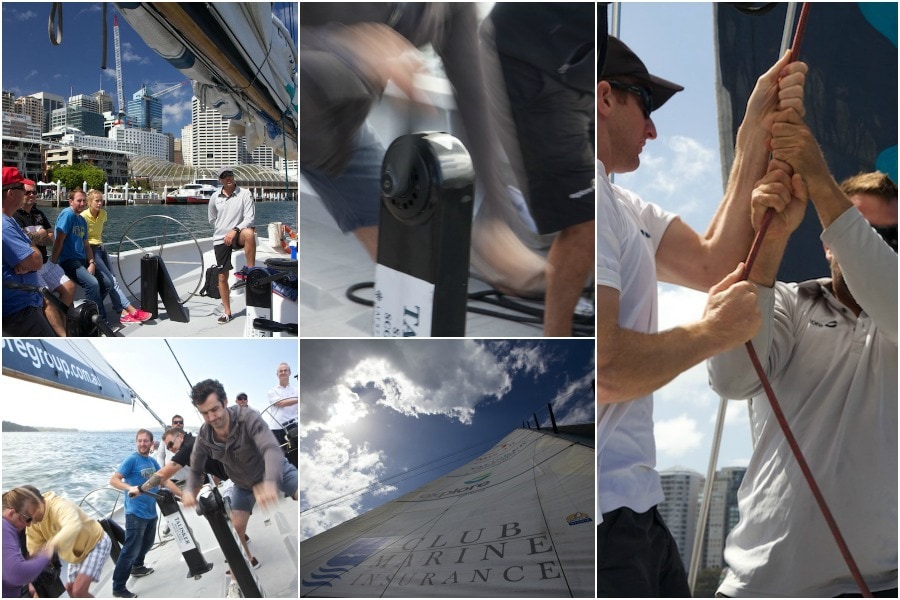 Campbell giving us our crew instructions and training

As we left the harbor under engine on the Kookaburra, an Americaâs Cup Class sailboat, Campbell was lecturing us on the 4 rules.

1. Stay on the high side
2. Donât touch any winches or ropes
3. Donât fall in the water
4. Donât panic â or at least donât panic until we (the crew) panic.

It seemed simple enough to me. Except for maybe the not falling in part.

It was clear that Campbell and the rest of the crew were pretty laid back, and really enjoyed sailing. They were like a family joking with each other, knowing how to poke in just the right way to get a reaction from the other. It felt as if you has walked into a tight knit sailing family.

However, before we were thrown into racing mode, we got acclimated with a 45 minute sail around the harbor. As you cross under the Harbor Bridge, you are greeted by the iconic Sydney Opera House and view of downtown. The famous Sydney skyline is a treat to see and experience â but from the water itâs even better. 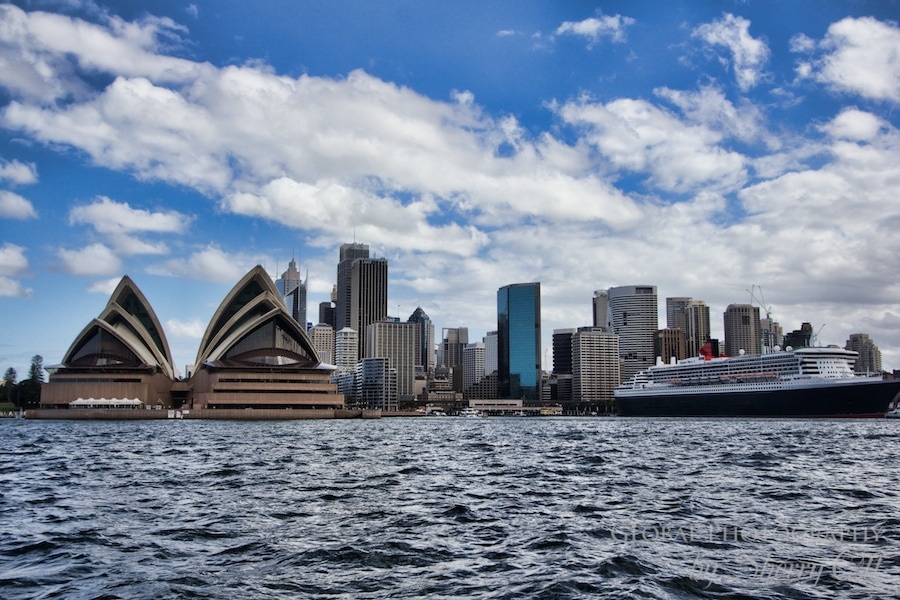 Campbell continued to lecture as we passed these iconic sights, âThe harder you work the quicker we go. Weâll do the trimming of the sails, but you guys are doing the winding. All you have to do is listen to us and go in the right direction.â Once again, this seemed simple enough, unless like me you also wanted to take a bunch of pictures. I wasnât quite sure how I was going to juggle it all, especially without falling in!

The popular Royal Prince Edward Yacht Club Wednesday racing has been a feature of Sydney yachting for over 50 years.Â  On average, some 50 yachts jostle in front of the clubhouse on a Wednesday afternoon to participate in this popular passage race around the harbor. The Kookaburra has won their division the last two years in a row and is currently in 2nd place in the standings, so a win today would really help towards winning the big prize. âWhatâs that prize if you win,â I ask Campbell.
âA set of steak knives,â he replies with a grin.
âJust one set? So you all have to share them?â I say laughing and imagining the crew each taking home one steak knife to display proudly. Clearly even though this is a serious race, there is also a lot of levity to it. 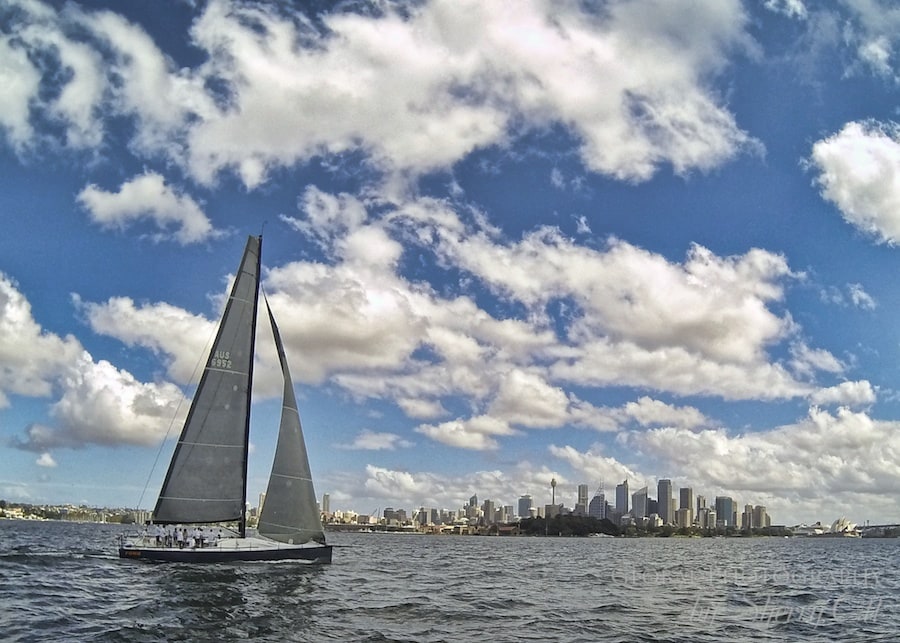 Sailing Sydney Harbor – the calm before the storm.

The start was completely chaotic to me, boats all close to each other trying to maneuver around each other and get position. I was in awe of our captainâs navigating. There was no gun, just an announcement by one of the crew who said, âWe are racing now.â Suddenly the lighthearted crew seemed to get slightly more serious and our ragtag crew of want-to-be-sailors got on the ready.

âOk Main sail trimmers â forward wind. Hold.â Bruce called out.
But I knew that I didnât have to listen to Bruce as I was on the jib, and I only listened to Campbell, so I stood there next to the winch handles on the ready.
Campbell then piped up, âHands on guys â backwards wind – go hard!â

I was fascinated on all of the communication that was happening at once â wondering how the captain was able to hear it all. Another member of the regular crew called out approaching wind gusts, people rushed around the boat doing various things, winding this, loosening that, tying knots. And I just concentrated on listening to Campbell, cranking the winch, and not falling in when we heeled over. 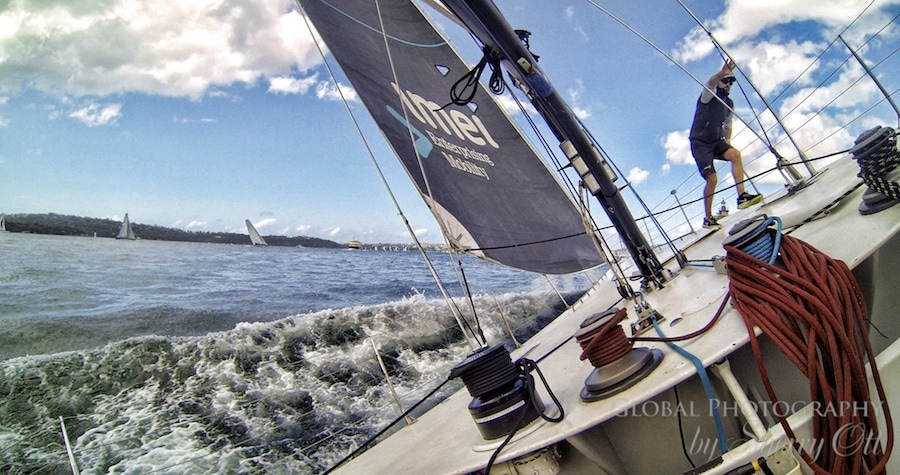 Heeling over means holding on!

I quickly learned what the little raised triangular bumps were on the boatâs floor â you used those to brace yourself when the boat heeled over. It was like being on a teeter totter, but instead of sitting on an end bobbing up and down, it was more like you were standing in the middle and balancing as each end went up and down. We had to all go stand on the high side a few times the boat was really heeled over, which for me is the most fun part of sailing. Every time the boat heeled over it would make a creaking and cracking noise making me feel as if I may be riding on the Titanic.

We went in and out of the lead during the race. After about 90 minutes of racing, 20 tacks, and an average speed of 10 to 11 knots, we ended up coming in 2nd place in the weekâs race. Sadly we didnât contribute towards winning the set of steak knives, but we did have a one-of-a-kind experience in Sydney. I bid my crewmembers goodbye and walked away from the boat with a sunkissed glow, sore arms, and with a bunch of recommendations of things to do and see from the locals I met. And the best part, I was dry since I followed the rule and didnât fall in. Mission accomplished! 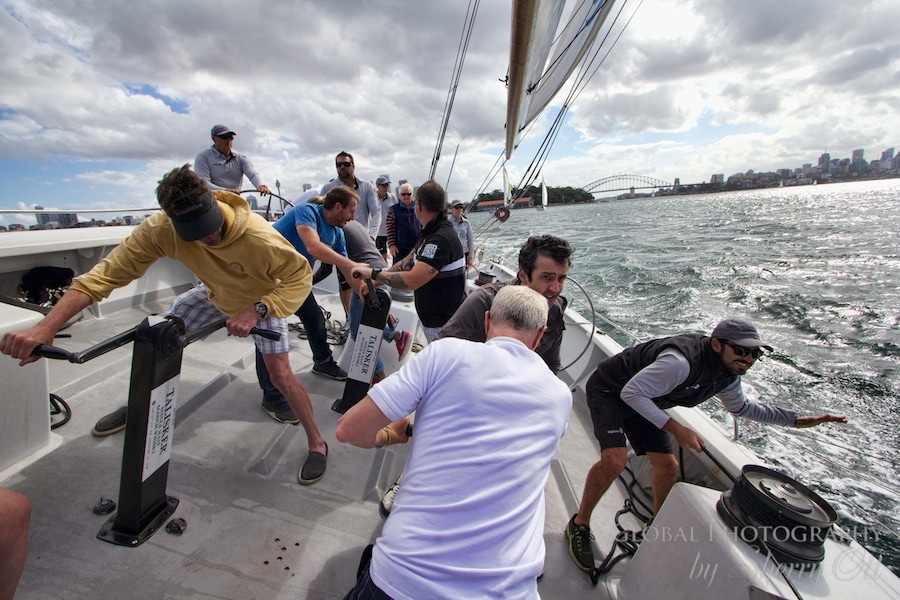 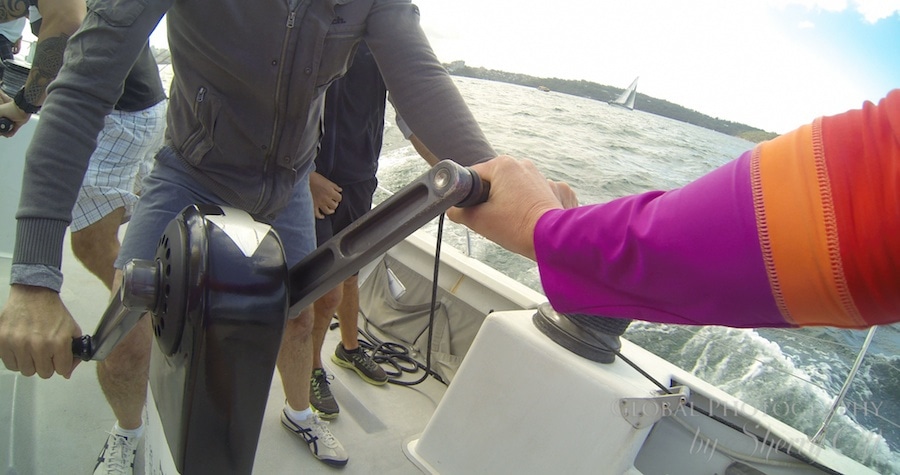 How you can have this experience:

Americaâs Cup Sailing on Sydney HarborÂ  via Viator –Â  The racing only takes place on Wednesdays â so be sure to book in advance. However you can book a regular sailing tour of the harbor any day of the week. 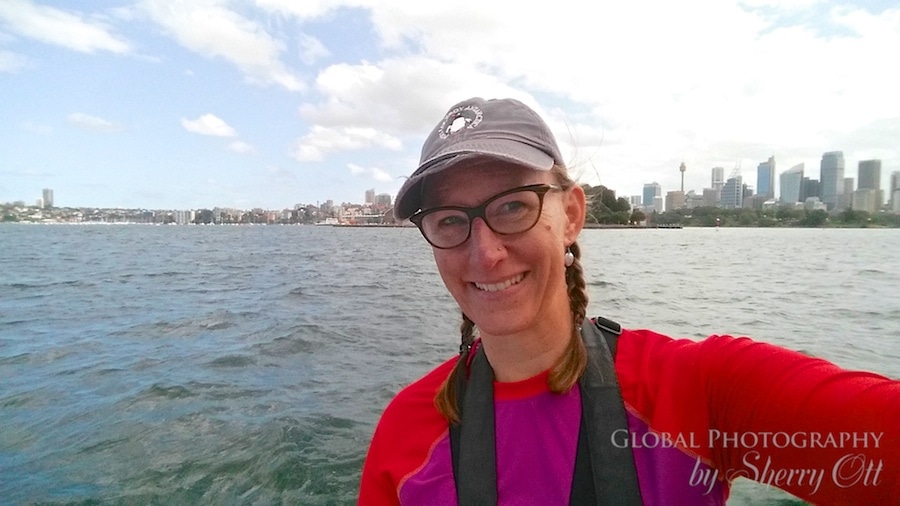 I didn’t fall in!

Disclosure: I was hosted by Viator Travel and work with Viator as one of their Viator Ambassadors.