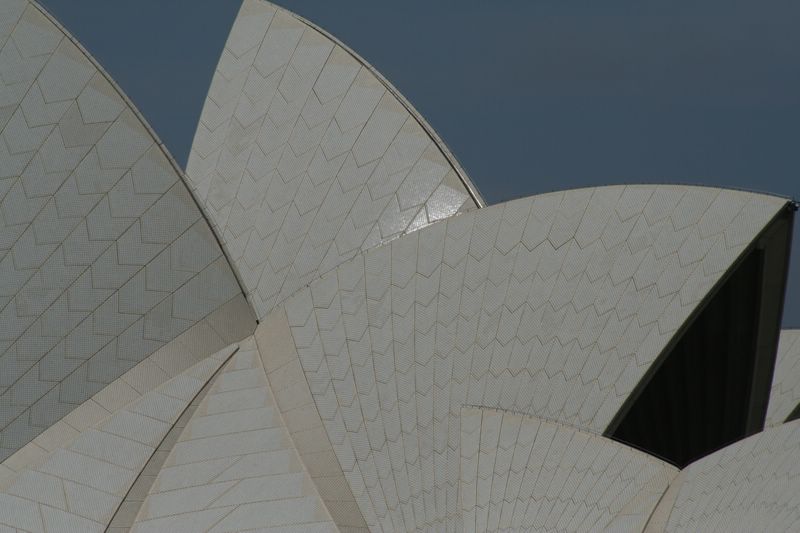 Photo: The famous landmark of Sydney

To view all of my Australia Photography – click here!

Upon arriving in Sydney I realized that this was really the first big, cosmopolitan city that I had visited since I left NYC. It was a welcome site – however that came with a price…costs like NYC! However – I was willing to try to suck it up for a few days to enjoy city life again – the bustling streets, the hip bars, the high rise buildings…the only thing missing was a Macy’s Thanksgiving day parade! The first day we walked all over Sydney business district – we ended up in an area called Martin Place – a large outdoor mall area surrounded by the tallest business buildings Sydney had to offer. A thought kept popping into – Bizarro.

If you are an avid watcher of Seinfeld then you will know what I mean when I say bizarro…there was a whole episode dedicated to it. The short explanation is when everything in Jerry Seinfeld’s world was opposite in a bizarre way. For example – the character of George was a normal, well-adjusted, responsible citizen with a job…hopefully you now get my drift when I say bizarro. As I looked around Martin Place and saw all of the busy-blackberry-carrying business people (to which I used to be a member) bustling around looking important, a mix of wide-eyed tourists with maps, high end Gucci stores, a fountain, Starbucks, and a large decorated Christmas Tree in the center of the mall area, surrounded by a sweltering 85 degrees temp…I realized that this was Bizarro Rockefeller Center halfway around the world in Sydney! There were big signs up about the big Christmas Tree lighting ceremony coming up on Thursday and they were busy building a stage for the performance. The only thing missing was an ice rink (probably impossible in the heat), the Today show, and the Rainbow room (however they did have a tall business tower with a revolving deck to see ‘fabulous’ views of the city). As I continued to walk around the city – I found more bizarro sites such as Bizarro Times Square, Bizarro Central Park Poet’s Walk, and even a Bizarro Brooklyn Bridge…it was a bit eery to me.

Photo: People climbing on top of the Harbor Bridge

The first day in Sydney I had to actually take care of some business too…I needed more pages added to my passport. I’ve only had my passport for 6 years and I was already out of pages…and none of it was business travel…a fact I’m rather proud of! (pat on the back for me!).

I found the American Consulate in the heart of Martin Place and went through the 3 levels of extensive security to get to the waiting room to request more pages. While I was there – I thought I would ask our friendly American/Australian hosts if they knew of any American Thanksgiving celebrations that were happening the next day that we could partake in.

They provided me a list of names and numbers of various Australian/American groups to contact…good enough…I was on a mission to find pumpkin pie. I started contacting the groups and found that one of them was putting on a traditional Thanksgiving dinner at a place nearby…for a mere $80 a person. This included one drink, turkey, stuffing, and pumpkin pie. I guess turkeys are hard to catch in Oz…as the price was rather steep! However Angie and I were desperate for pumpkin pie so we decided that we would buy the ticket as we had nothing else to do for the holiday. When I called back to the Australian American Association to book it – the woman I talked to on the phone asked where I was from and what I was doing in Australia. I told her that we were just traveling through on holiday and wanted a place to celebrate Thanksgiving since we were both away from our families. She then did something that floored me…she said that the association would pick up our dinner fee and we would could go as their guests. I decided that this was not a good time to tell her that we were staying at the Four Seasons Hotel…instead – I graciously told her that it wasn’t necessary to do such a thing – but we would greatly appreciate it! I was amazed as this woman didn’t even know us and she was being so hospitable…the spirit of Thanksgiving was alive down under!

The next day I spent the day at the museums, and walking around taking photographs while Angie shopped. I found that I had to stay away from shopping temptation in Sydney else I would be coming home in February instead of September! The Sydney Opera House was my favorite site – it was really quite beautiful in the sun! For some reason the roof has always looked like eggshells to me – so the opportunity to photograph it was fantastic. When you look at my link of photography you’ll notice that I loved it considering that I think I took about 50 pictures of the building! I wandered around the Harbor Bridge (Bizarro Brooklyn bridge), and the Rocks neighborhood (bizarro South Street Seaport). Another bizarro siting…the Australian Idol show was prepping for their big finale at the Opera House grounds that coming Sunday night.

Angie and I met back up and I salivated over her great purchases as I told her about my day of bizarro sites and museums. We got all dolled up and went off to the big turkey day banquet! We arrived in time for the cocktail reception and met our host, Anne, and others that would be sitting at our table. The dinner was for about 150 people total and our table had 10 people at it. All of them had some tie back to the US (a husband, step-dad, or just a love of the US) – and none of them really knew what the holiday of Thanksgiving was really about. So Angie and I dusted off that part of our brains that we hadn’t used since 4th grade and tried to recount the story of Thanksgiving…the pilgrims, Indians, corn offering, etc. This was right next to the space in my brain which held the names and order of all of the planets of the solar system…so it was all a bit rusty. We managed to get the point across – and then told them that it was really about family, food, and football….American football that is.

We went to sit down at our table and I was immediately struck by the table centerpiece…a couple of ears of fresh corn (technically it wasn’t really harvest time in Australia) and an American flag! I found it rather cute…and a bit bizarre too. Next Anne, our host, came around and gave us all a little pin to wear (an Australian flag and an American flag next to each other), and she also gave us a patch. The patch was precious…I may have to figure out a way to sew it to my backpack. This picture of a kangaroo and an eagle shaking hands/wings was over the top! We were so thankful to be guests of this group…they were really wonderful!

There were Australian and American speakers that got up to address the eating community and talk about Thanksgiving and the partnership of Australia and America…the whole thing kind of brought tears to my eyes as I really missed being home for the holidays. Angie and I glanced at each other with tears in our eyes and raised our glasses of wine to our families.

Now…bring on the food. Hold on though…there was one more ‘event’ that happened before we could dig into our feast….something VERY bizarro. All of a sudden…a person in a chicken mascot outfit came out of the kitchen – he was running around all of the tables. Everyone seemed happy to see him…Angie and I just looked confused. I thought maybe they were trying to mimic a football mascot or something. However – we came to find out that this chicken was supposed to represent a turkey (I liked to refer to it as a churkey)…ohhhhhh…now do you get it…in a bizarro way. As the churkey was running around, the next thing that emerged from the kitchen was truly stunning…Dolly Parton…no – not the real one – someone dressed up like one. They played Dolly music in the background and Dolly was running around the banquet room trying to catch the churkey. I looked at Angie and wondered just how much wine and champagne we had been drinking…or was this Land of Oz really this strange? The only real explanation we got regarding this whole episode of Dolly and Churkey was that Dolly was the most American person that they could think of for the skit of someone hunting a turkey…or maybe they just had a couple of extra soccer balls laying around and thought they would make good boobs…who knows. So – after that shock…now we were ready to eat.

They paraded out the turkey (real ones)…about 100 of them…it was quite impressive. After the turkey parade they set one at the head of each table…gave the oldest looking man at the table an apron and had him start to carve. The food was good – and they had a bit of everything…turkey, stuffing, sweet potatoes, and veggies. However, I found myself missing my traditional family menu that my mom and dad always cooked up…German stuffing, peas and broccoli, and fresh cranberry sauce. However – mom and dad didn’t have Dolly…so I guess there are trade-offs. Overall – we had a wonderful night and were so thankful of our guests to treat us to this big dinner (and many, many drinks) – the whole night was priceless! Oh yeah….and there was pumpkin pie…at last!

The final days in Sydney, Angie and I toured the opera house, ran around the parks, found great restaurants, took the ferry ride to Manly beach, enjoyed our Sydney accommodation, and soaked up the sun. We also were able to get out and enjoy the local nightlife and dancing when we met up with a friend of Angie’s for Friday and Saturday night. The trip to Sydney was complete with some late night clubbing with our ‘new friends’. Who would have thought that we could find all of these familiar, yet bizarro, things in Sydney…however – I have to say…Dolly still takes the cake…or should I say, takes the churkey.

Photo: Angie and I at pre-dinner cocktails at Thanksgiving dinner

One Response to "Turkey and Dolly Parton – Bizarro Sydney"