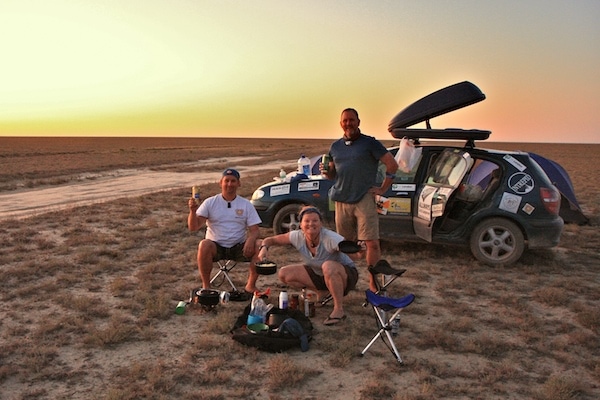 Team camping is where much of the bonding took place

Before I departed on the Mongol Rally, when I told people about what I was doing this summer they were surprised, but consistently it was one topic about the epic road trip that fascinated people most. It wasnât the inappropriate car or the length of the trip. It wasnât the fact that my team had no mechanical knowledge. It was simply the team dynamics.

âYou are going to ride for 5 weeks in a car with people you donât know?!â said in an incredulous tone as if I had announced I was going to Mars to plant Christmas trees this summer.

So â here it isâ¦what youâve all been waiting forâ¦the post on how 4 strangers drove 8500 miles in a car togetherâ¦the good, the bad, and the ugly. 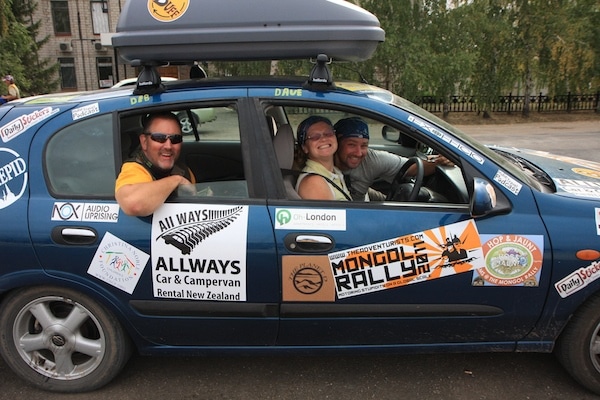 It's a long time to travel together...but this was about 3 1/2 weeks in..we hadn't killed each other yet!

Let me just start this by recanting what one participant on another team told me during the rally. She had actually done the rally with her husband 4 years prior and they were doing it again this year. She said,

âItâs not mechanical issues that normally trip up teams, it is the team relationships and dynamics.â

She told me this as one of their team members flew home that morning due to that precise issue. Quite frankly, hearing that made me feel better as our team dynamics certainly werenât all chirping birds, butterflies, and wildflowers every day.

The best times were drinking wine, vodka, and beer (no surprise) and simply hanging out camping or in one of our apartment rentals talking about our parents and families. Since we were all about the same age, it was amazing how many things we had in common.

I remember one of my favorite nights was camping in Kazakhstan. The men retired early and Deb and I stayed up chatting and drinking beer underneath the expansive star display. I loved how open and honest we could be with each other.

When we clickedâ¦we clicked; especially at border crossings. We did a good job of dividing responsibilities most days. Because we were pretty well traveled and independent already â we were efficient and generally we all had roles. Dave changed tires and managed the camp stove. Deb constantly was in charge of petrol and cooking meals. Rick provided humor and did dishes. And I worked on figuring out lodging in our next location most of the time.
We also were able to teach each other new things about blogging and tools we used. I think all of use came away with new tips and knowledge that we didnât have before! 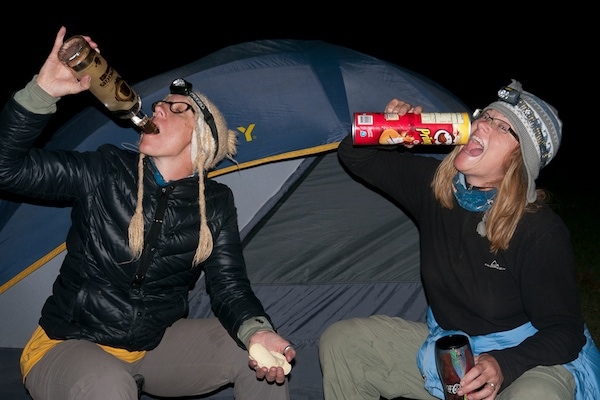 Deb and I partaking in two of our favorite things! 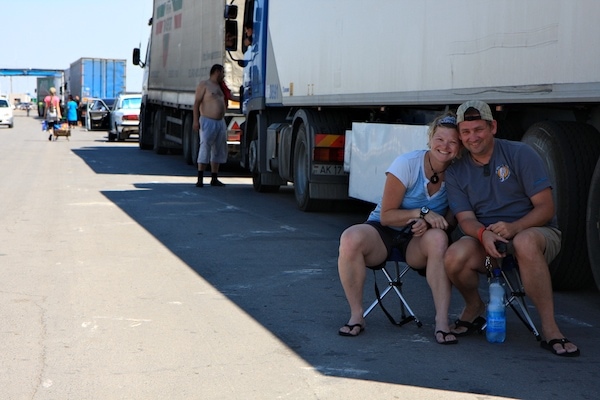 Dave and Deb wait patiently at a border crossing 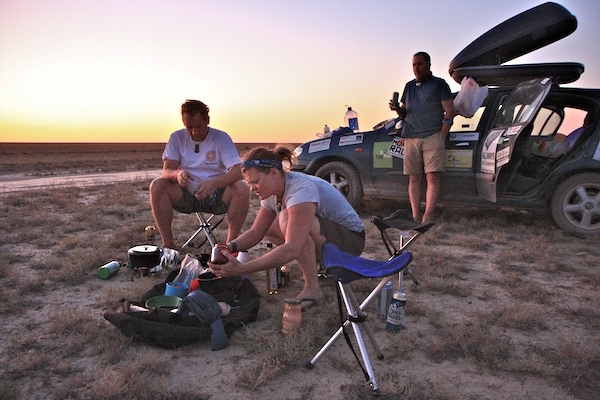 Camping - everyone had their roles

Rick, Dave, Deb and I didnât really know each other very well at all, but we had all had little hints into our personalities during the course of planning over the last year via skype. However what we didnât plan for is that those hints would turn out to be full blown issues when in a car with the same people day in and day out.

One of the biggest hurdles we had to deal with is that we all had very different travel styles. I came from a solo background where I controlled everything myself. I never have to ask anyone what I should do or where I should go â I just do what I want.
Dave and Deb travel as a couple normally. They know each other so well that they barely have to even ask one another what the other thinks! Rick hadnât traveled extensively outside the US at all and he certainly hadnât done much independent travel where roughing it and split second decisions were necessary.

And the biggest hurdle for us was the fact that for all of us â we had to constantly make decisions about our journey every day, hour, and sometimes minute. Those decisions would need to be discussed and scrutinized by the other teams members because they would affect all of us. The majority of our time when we travel many decisions are made for us â certainly when it comes to press trips or tours. But now we were faced with where to stay each night, how to get there, which road to take, who would drive, how much gas do we get, etc. And everyoneâs personality and level of tolerance was differentâ¦this is a difficult recipe for success. 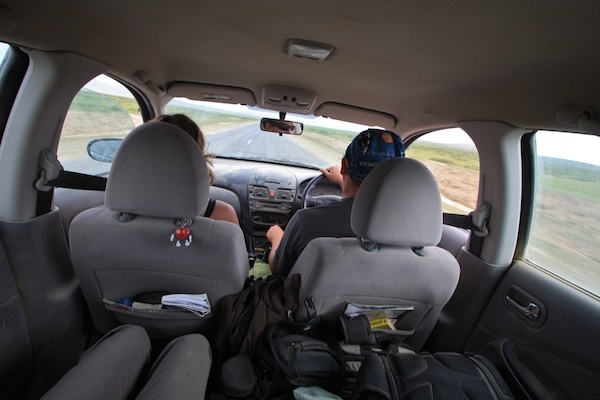 It's a small space to spend 5 weeks! 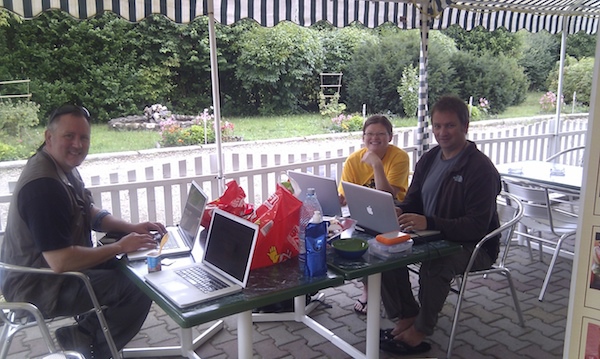 Working at a campsite in Romania - just a few macbooks along...

From the beginning I had said I went on this trip because it scared me. I really didnât know if I could do it. Driving in other countries has always intimidated me. More often than not my scaredy-cat personality would come out in the form of worry. I felt like my mother sometimesâ¦but I couldnât help it. Did it annoy and effect my teammates, yes. Did we argue about itâ¦yes. Did we make upâ¦yes.

Traveling with Rick was like traveling with Bill Clinton. I say that mainly because he sounds just like him! However I quickly realized that he was sort of like Clinton in other ways too â you could never really nail him down on anything! He was soooooo easy going that he didnât really have an opinion. In this rally world where lots of decisions needed to be made, having one person opt out of the decisions made for a tense time. Did it annoy and effect the teamâ¦yes. Did we argue about itâ¦yes. Did we make upâ¦wellâ¦most of the time!

I learned midway through the rally that Dave and Deb had a big concern about team dynamics. They wanted to make sure they didnât always appear âteamed upâ or on the same side. They didnât want it to be the Dave/Deb show and overpower the team – especially when the majority of the time it was only the 3 of us making decisions. It was actually great to hear that they had put that much thought into it. However since they were trying so hard not to dominate the decisions, it sort of backfired as I never really knew what they wanted to do or when they were backing down because they didnât want to appear too pushy. There were times when I needed them to be pushy and push me out of my scaredy-cat ways â but they backed down. Did we fight about itâ¦yes. Did we resolve itâ¦yes. Did we make upâ¦yes.

The one thing that you could always count on is that Deb would speak her mind. I found it refreshing and challenging at the same time. Yet I know that Iâd rather be around a person where I know exactly where I stand as opposed to being back-stabbed. It pushed me to stand up for myself and my opinion at times. And the best part is that she appreciated the push back.

I donât think I need to get into all of the details of every bad momentâ¦we certainly had some. There were tears, there was yelling, there was talk of quitting and going home. We were all frustrated with each other on some days; who wouldnât be?! 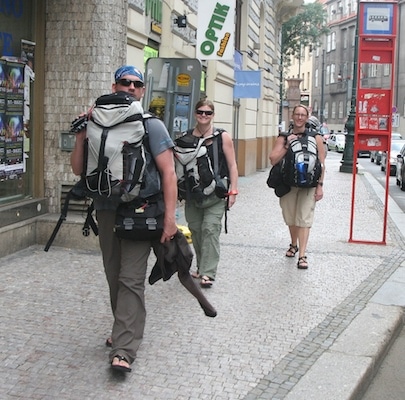 Dave, Deb, and I walking to the car in Prague 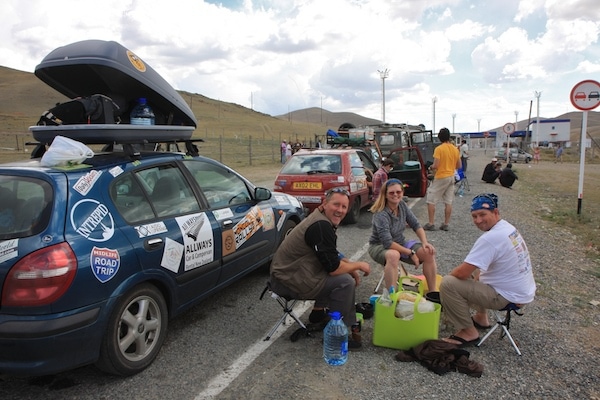 Waiting at the Mongolian border 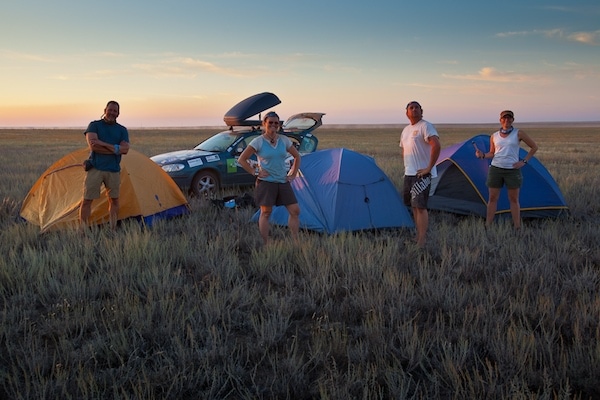 One of my favorite pictures of the team - doing what we loved....camping!

Are we still friends?

Just like anything in life â there are ups and downs and you will be thrown challenges. Imagine being in a car with 3 of your work colleagues for 5 weeks â how do you think youâd fare?

The important thing is that we are all still friends and quite frankly I miss them!Â  Itâs strange to go from every day together to nothing. I think it’s a testament to the type of people we are that we can go through such an adventure and still remain friends! Rick had to go home early to catch a flight, but Dave, Deb, and me ended up really bonding then; they felt like siblings by the time we got to Ulaanbaatar! I love them, yet we can all frustrate the hell out of each other too â just like any good sibling relationship! But I know that the bond we built together will last us a lifetime.

Would I travel with them again? Hell yes! 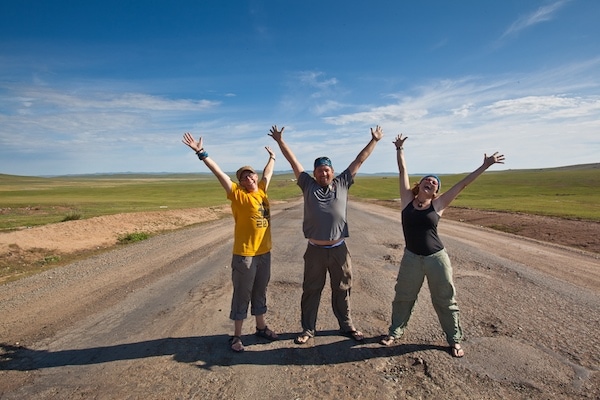 Dave, Deb, and I celebrating out last day!

Have you ever traveled with strangers?Â  What were the challenges?

18 Responses to "Traveling with Strangers"