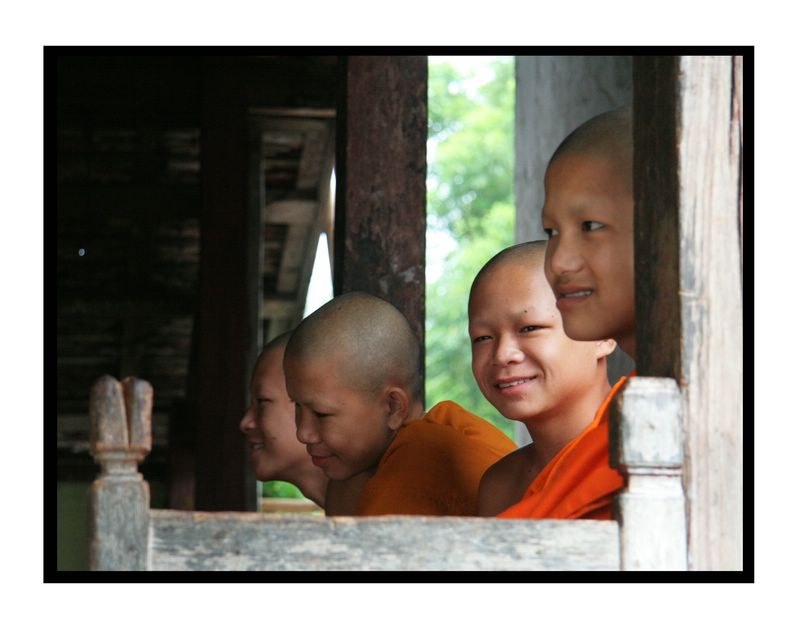 Click here to see the photo documentary on Giving Alms!

Every morning in Buddhist communities it happens like clockwork â giving alms. Giving alms is the process of monks going out to get food from people that want to make a âgood deedâ. People fill monkâs bowls with rice, drinks, oreos, biscuits â anything that they may enjoy. By offering food to monks, the lay Buddhist is making a stronger connection with the Monks and Buddhism in general. This is really the main source of food for the monks living in the temple, they depend on the community to feed them. Itâs a wonderful âritualâ and I was lucky enough to participate and witness it while in Laos.

In Luang Prabang the process of giving alms is unique. All of the temples throughout the city participate in the process as a processionalâ¦a parade of monks of sorts. They all leave their temples at 6AM and walk the main streets of the town in a long procession collecting food from locals and tourists.

I was excited to witness this colorful early morning ritual. I was out the door of my hotel by the painful hour of 5:30AM. In the complete darkness I walked up the street and was immediately bombarded by local women trying to sell me things. I am not a morning person anyway â but this immediate swarming was enough to make me want to go back inside and give up the photography of alms. However â I tried to politely say ânoâ and kept walking. As I walked up the street, I wondered how the alm process worked. I had never really witnessed this before â so I was confused as to how, and who, were going to be out giving alms as the street resembled a ghost town. As I walked myself out of my sleepy haze, a lightbulb went off in my headâ¦the women were not trying to sell me trinkets, they were trying to sell me food to give to the monksâ¦ahhhhh. If they had coffee, I would have paid them $20 for that! As the sun came up, I picked a corner and tried to communicate with one of the ladies selling food. She explained to me through charades that I was to give the monks sticky rice and biscuits while sitting on a mat on the street. I had to be sure not to point my feet at the monks and I had to remain lower than the monks as these were both signs of respect. I paid my $2 and they set up a mat, a container of sticky rice and a large plate of biscuits for me. I was ready for the monks to arrive. One problem thoughâ¦if I was giving food out â how would I take pictures? I hadnât thought this out too well I guess.

As I was waiting, another tourist, a young woman from the UK, came and asked to sit down next to me. She was holding Oreos and Snickers. I asked her if thatâs what she was giving the monks and she replied, âYes, I heard that the monks get really tired of sticky rice, so they prefer to have some chocolate once I a while.â.

I looked down at my pathetic sticky rice and biscuits and was feeling a bit dejected. Oh well â food is food, and the monks were about to arrive. I could see the orange blur off in the distance. There was a bunch of commotion to my right as tourists buses pulled up and let scores of tourists off. The ladies surrounded them like ants to a dead bugâ¦trying to sell them sticky rice. Eventually the buses of tourists got settled down and assumed their positions on the street in an orderly fashion. I told the woman next to me that in addition to her groovy Oreos, she was also free to hand out my food as I needed a hand free to take pictures. We assumed a teamwork partnership!

The monks arrived in total silence, in bare feet, dressed in their bright orange robes, carrying their metal pots. I slowly provided them food as if I were a lunchroom cafeteria worker handing out Salisbury steak. Eventually my new friend next to me took over handing out the food so that I could take photographs. However â we eventually ran out of our food and decided that we would get up and follow the procession of monks for a while to watch more of the activities. As we followed them around the corner we noticed that there was a big blue basket in the middle of the street where some of them were dumping excess sticky rice. It seemed rather odd â but Iâm sure if you had sticky rice every day â youâd also be tired of it.

We continue to follow the long procession and eventually came to the area where the locals handed out alms. I really enjoyed watching the locals hand out food â it seemed more meaningful in a way. As we walked with the procession and took photos, we eventually came to a temple where the monks were finishing their procession. One of the monks said that it was ok if we came in as it was a good chance for them to practice their English. We respectfully went in and sat below the monks and talked to them about their lives in the temple, the procession of alms in Luang Prbang, their educations, their families â it was a wonderful exchange.

The whole morning was an eye opening experience. Who needs coffee when you have cultural experiences?

2 Responses to "Processional for Foodâ¦Giving Alms"