The Fast and the Furious â Boat Racing on the Mekong 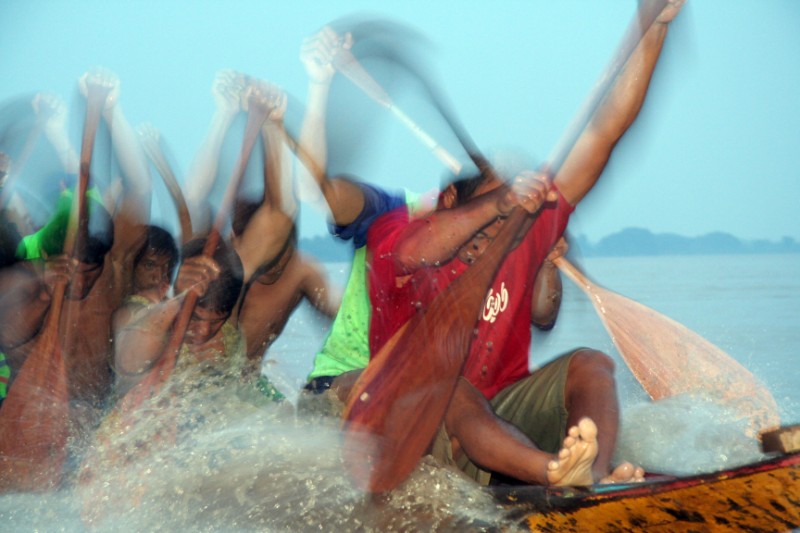 The Fast and Furious

Click here to see the photo documentary on the Fast and Furious!

I arrived at the village of Tha Phra as the sun was going down. It was a normal Tuesday night for the men and boys of Tha Phra, they showed up on their motor bikes after a long day, they chatted amongst themselves, changed into their boating clothes, and played wicket ball. Wicket ball is a Laos game which is a mix of hackey sack, badminton, and volleyball. It was truly mesmerizing to watch their athleticism as they jumped through the air and contorted their body to kick the wicket/ball over the net.

The crowd of testosterone grew larger and larger as they gathered around the muddy banks of the Mekong preparing for boat practice. The Tha Phra boating team was like the Green Bay Packers of boat racingâ¦they had a history of being successfulâ¦plus it helped that their team colors were green and gold. Actually though â I came to realize that boat racing amongst villages in Laos was similar to high school football in small towns throughout the US. There was a frenzy about it, the season was short, the whole town supported the team, and everyone was involved. Tha Phra was so crazy about their boat racing that they had two teams â an older team â men 25 to 35 yrs old, and a younger Tia team (Tia in Laos means small) for 15 to 25 yrs old. Like any normal Junior Varsity or Varsity team â some of the better younger men also rowed for the older team. The teams were each comprised of 50 people in a very long, narrow wooden boat. They graciously agreed to seat 51 tonight â I was to sit in the boat and take photos of the team at practice.

I made my way down to the muddy riverâs edge for my first dip in the Mekong. The team was in the boat waiting for me. I gingerly walked out to the front, swung a leg over and set foot in the wooden boat. This wasnât as easy as it would seem as the front of the boat was quite narrow and therefore wobbly. I steadied myself and went to sit down.

Problem #1, my hips didnât fit into the seat, once again reminding me that I am a giant in Asia. I squeezed my hips into the seat the best I could, and the young boy in front of me took the handle end of his paddle, knocked it against the inside of the boat 3 times, and immediately attention was given. The whole team bowed down in their seats, one more knock of the paddle, a guttural team noise in unison, and everyone sat upright poised with their paddles above the waterâ¦we were ready to begin. I really had no idea how fast the boat could go, but with the strength of 50 fit men paddling in unison, it felt like we were flying! Soon I realized that my first row seat did allow me some great shots â but at a priceâ¦the price of getting soaking wet.

It was boat racing season in Laos. The end of the Buddhist Lent marks the beginning of celebration, for Laotians, this means festivals and boating. The season culminates in a large competition in Vientiane, Laosâ capital city, at the end of October. Tha Phra was ultimately preparing for the Vientiane race, but first they had to get back in the racing swing by competing in local village festivals and races.

On race day we slowly made our way 30 km outside of Vientiane across the river on a slow, bamboo, single-car ferry. As we crossed the river on the weighted down bamboo ferry, I was in awe of all of the people on their way to the race, and I was equally in awe that the ferry stayed afloat! We arrived at the race and set up âcampâ at Tha Phraâs tent. We managed to get me a spot on the coachâs boat so that I could ride along during the races and take photos. The Tia team was racing today, and they had their game faces on. They were dressed in their green and gold uniforms, and some were wearing cowboy hats making them appear as renegades. Many had brightly colored bandanas on their head, or paint on their face â but mainly â they were serious. This group of fun-loving men that I met a few days ago went from laughing at me getting wet to barely noticing that I was there. I was happy to see their focus and determination.

The younger Tia team had its work cut out for them today. It was a hot day, and they would be competing against older teams, as Tha Phraâs older team were resting for a competition the next week. The boating fate of the village rested on these young menâs shoulders and paddles. Luckily, they easily won the first race â they made it look simple, gliding along the water as if it were ice.

I decided to once again ride on the coachâs boat for the 2nd race as it was a wonderful perspective for photographs as well as being the best seat in the house for the competition! As we waited for our team to compete in their next race, the coaches all gathered together along the river bank in their boats near the start line. I was the only female, English speaker there among 12 Laotian men. No problem, Iâve been in these situations before. However â as the waiting continued, more and more beer flowed among our coaching boats. In actuality I was surrounded by 12 very drunk men, who were shooting off fire crackers and walking across boats with no real concern of capsizing the unstable boats. I normally wouldnât mind the thought of capsizing â but with thousands of dollars of camera equipment around my neck â I wasnât too thrilled about the though of watching my camera sink to the bottom of the muddy Mekong. Since they were drunk and in the festival mood, they lit and threw the firecrackers in a sporadic, âmy arm feels like rubberâ, manner that would make the fire cracker land about 4 feet from me and the boat. I was getting less comfortable with the situation. Then, the final straw was when I notice one of the men take off his flip flop and quickly whack a scorpion in the boat â only a few feet from me. Nowâ¦I was officially freaked out. I filled my mind with thoughts of â âhow the hell do I get myself into these situations?!â. Luckily the second race was about to begin â so the men had to pull it together and go give a pep talk to the teamâ¦thank goodnessâ¦.yet I still kept on the lookout for additional scorpions.

The second race proved to be a bit more challenging than the first one. Tha Phra started off well, but soon fell behind. I watched as the team struggled their way back into a neck and neck race. The coaches in the boat were on their feet, the crowd was intently watching, it was a photo finish. However â it was not in Tha Phraâs favor unfortunately. They lost by an arm length.

As the day continued on, there were more races, some more heartache, and more powerful sun beating down upon everyone. At the end of the day Tha Phra finished 4th out of 8 teams,

a very respectable finish for their young, Tia team. They had a lot to be proud of. Finally, as they came off the boat for the last time, their intense game faces eased up a bit and they turned back into young boys as if the spell had been broken. As they left the river banks for their team truck to transport them back to Tha Phra, they joked around, smiled, and even had time for buying some ice cream before being whisked away into the bumpy sunset.