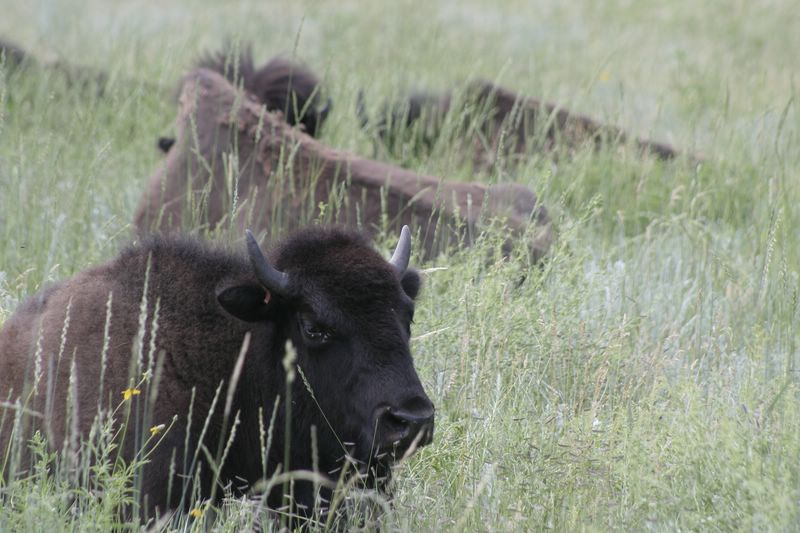 The signs were everywhere on our way to Custer State Park South Dakota. In Pierre, along the interstate, near Rapid City, in small townsâ¦the silhouette of a buffalo and some scripted writing with an arrow pointing the direction of âDances with Wolves Filming Siteâ. I havenât seen the movie for some time; however I do still remember the Indian name for buffalo, tatanka. Itâs probably the only Indian word I know. It seems like the movie Dances With Wolves put South Dakota on the map.

On day two of my family vacation we unknowingly ended up on a South Dakota Safari. It seemed that our travels kept leading us into the path of wild animals, sometime on purpose, sometimes on accident. Luckily, we survived all of the encounters and so did the animalsâ¦yet I believe we probably equally scared each other! 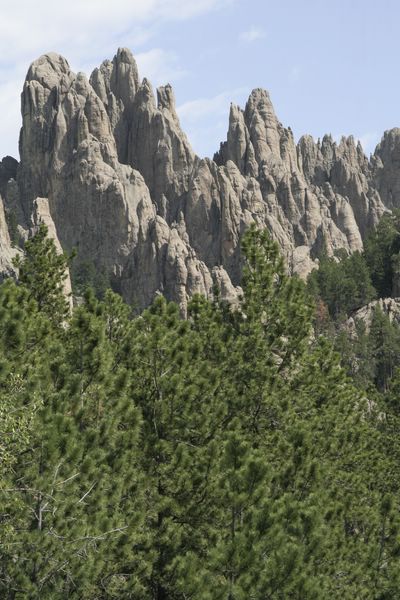 We decided that we would explore the nations 2nd largest state park, Custer State Park. Itâs nestled in the Black Hills of South Dakota on the western edge of the state. After traveling through the Midwest for a while, itâs always exciting the first time you start to see hills, they look like mountains and your eyes are relieved to get a glimpse of something that isnât so flat and vast. Thatâs how I felt when I entered Custer State Park, relieved to know that there is something else other than wheat fields and hay bails as far as the eye can see. My dad navigated the scenic Needles Highway through a multitude of curves and turns; I thought about how Iâd rather be the driver than the passenger in this situation while wondering what needles had to do with hairpin curves. We came out of the woods and I had my answer, the needles were the rock formations that loomed in front of us jutting up out of the forested hills. We pulled over so that I could take some photos and get some fresh air before car sickness took hold!

As we were walking around the rocky area I heard a weird noise and saw something move out of the corner of my eye. I looked left in the direction of the UMO (Unidentified Moving Object) and I was surprised to see a large white mountain goat jump onto a huge rock about 15 feet above where my dad was standing. I grabbed my camera and started shooting as it continued to jump and make its way down the rocky cliff face and onto the road. As it reached the road, it ran right towards my dad and stopped about 5 ft. from him. The goat looked at him for a few seconds, and then ran around him. I honestly thought that my dad was going to get rammed, but they must have had some sort of meeting of the minds deciding that they were friends and not foes; not to mention too stubborn to move. 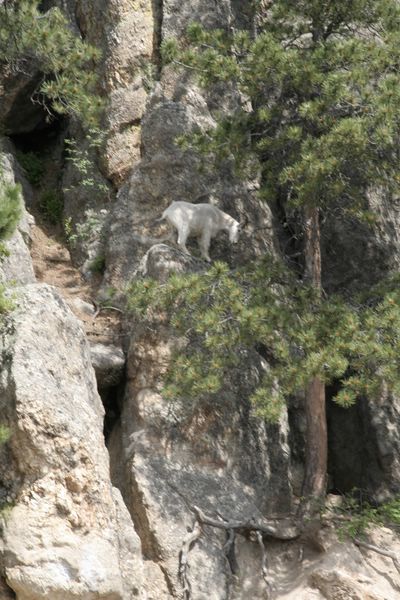 Mountain Goat in our sights

After our close encounter butting heads, we went on towards Mt. Rushmore to view the famous heads. This was my main goal in coming to western South Dakota; to get a dose of the ultimate monument in American pride. Itâs the one monument that will last longer than any other thanks to it natural, sturdy construction. There is no entry fee for the monument, which makes it my kind of tourist attraction; budget friendly! However, parking was $10 and thereâs really no getting around that unless you arrive by bus. I share a birthday with one of the rock heads, but even that didnât get us free parking. 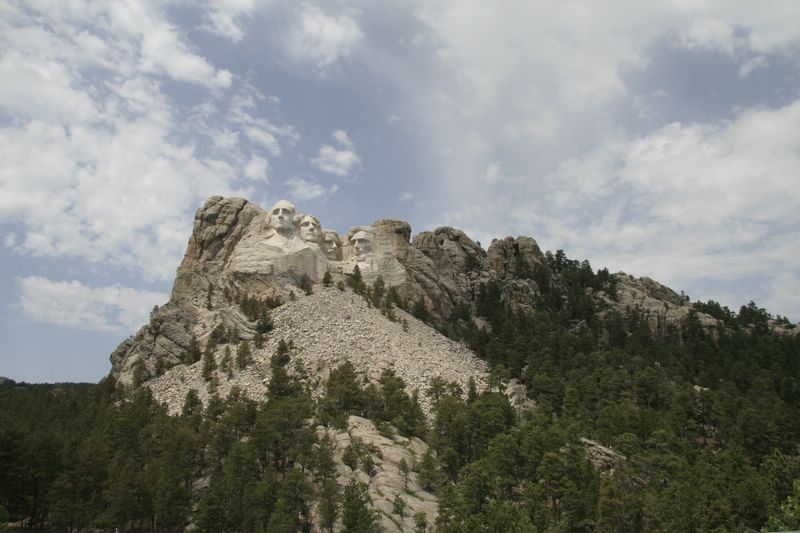 Mt. Rushmore was pretty much what I expected, impressive and very patriotic. The museum/visitor center was full of footage of the construction as well as history of the famous presidents. As I read the historical information and presidential quotes, it reminded me of just how unique this country is. For all of my disgust with it at times, I have to admit, it is a pretty amazing place with a strong cultural personality; unlike any other country Iâve ever been to. 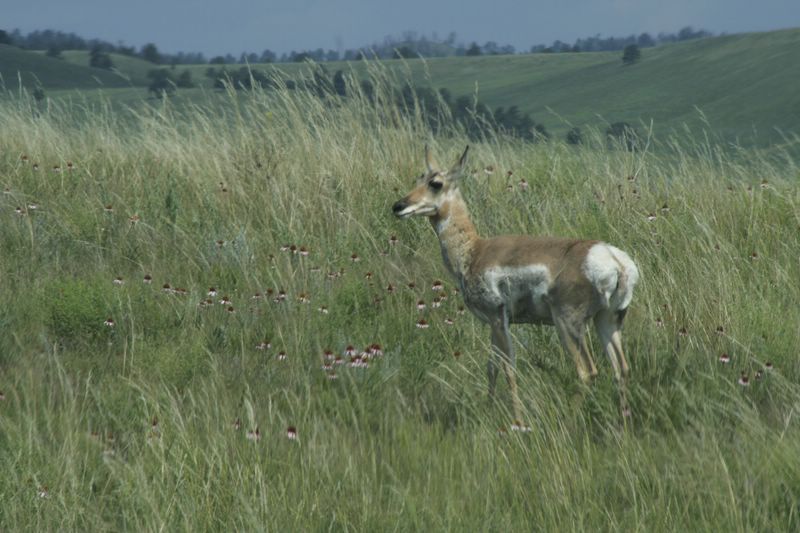 The remainder of the day we traveled by many more Dances With Wolves signs through the town of Deadwood and winding through Spearfish Canyon. We even made it to Wyoming where the rocky hills oozed out into a vast rolling âbig countryâ of hills and open spaces. This is where we had yet another animal encounter, with Bambi. Bambi was in the middle of the road and we were hurdling towards it trying to quickly decipher which way Bambi was going to turn. Odds were that Bambi would turn; Deer never stand still when you want them to. We slammed on the breaks and veered to Bambiâs right the exact direction which Bambi decided to go of course. I braced myself and cringed knowing that we werenât going to be the ones hurt in this situationâ¦the Honda outweighed Bambi. I watched out the front window as the little white tail was going to be swallowed by our car, but by some miracle of good brakes, we ended up simply tapping it and saw that it was able to run off and up the hill without any noticeable limp. All was fine in the enchanted forest, but it was one very close encounterâ¦I mean call.

The next day I was ready to see tatanka â not just on a sign announcing Dances with Wolves, but the real thing. Custer Park has herds of buffalo roaming the park in the prairie areas. We took off early in the morning and I strapped all of my cameras around my neck in the hopes of maybe seeing a buffalo. Sure, I had seen the buffalo in Golden Gate Park before, but they are fenced in and not as âconvincingâ as seeing a large herd out in the grasslands of South Dakotaâ¦the motherland of tatanka. We wound along the park road eyes peeled for anything brown that moved. A car in front of us had pulled over ahead, so I knew that there must be something worth stopping for. Sure enough, a huge male buffalo was slowly walking across the grassland! I got out of the car and used my zoom lens to capture it. After watching it lumber along I was pretty satisfied with our sighting â my goal was met. We continued on and went around the corner and to my surprise there was the rest of the herd â about 100 of them roaming freely.

All of a sudden I was transported back to Kenya on safari. I felt like I was really on an adventureâ¦right here in my home country. I hung out the window shooting the herd on both sides of the road. They were slowly on the move and we, along with a long backup of other cars, were in their way. Iâve never seen anything like it before, we were literally caught up in rush hour traffic, but the traffic had hoofs and was larger than most sedan size cars. This was a test of patience as we sat there for at least 30 minutes stopped or inching along as the herd slowly moved through the road calling/snorting to one another. As I hung out the window taking photos, I couldnât help but laugh and recall how much this reminded me of cows and driving in India. My parents were getting a bit impatient about the whole buffalo jam, and I just channeled my âtravel patienceâ which I acquired last year around the world and really enjoyed the crazy moment. The buffalo were surrounding out car, walking by so close that I could reach out and touch themâ¦but decided against it as a 2,000 lb buffalo was a bit intimidating to me!

The close encounters of the hoofed kind were exhilarating, and a bit dangerous. Luckily no person, animal, or car was harmed on any of these encounters! The buffalo traffic was by far my favorite experience of the whole trip to the edge of South Dakota. It made me realize how much I have missed traveling and crazy adventures that are truly out of the ordinary; experiences which arenât contrived and scripted like most of our tourist attractions. I think Iâm about ready to leave againâ¦which is good considering I have a one way ticket out of the country on August 26th. 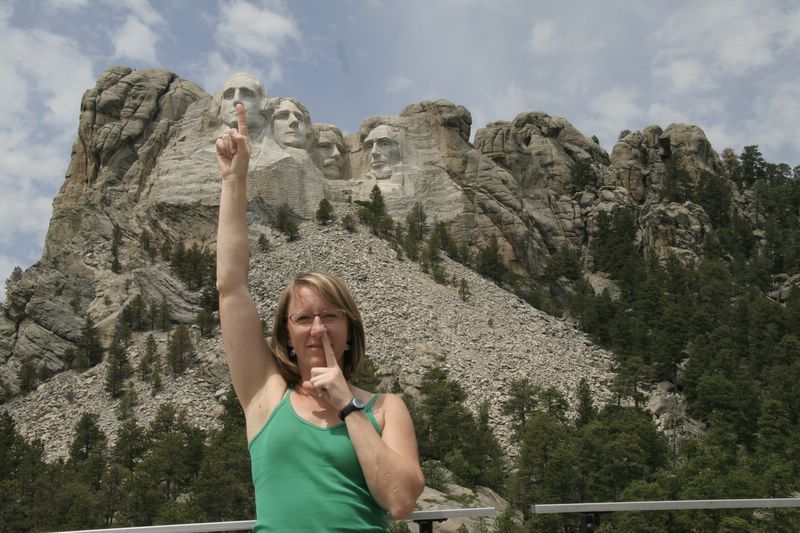