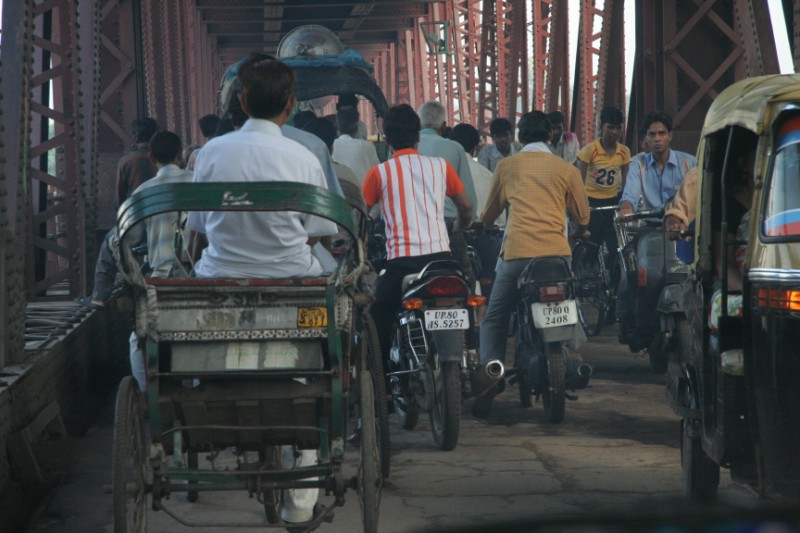 Up until now, I used to think that Vietnam was the craziest traffic I had ever seen in my life. Wellâ¦move over Vietnamâ¦enter India. I am absolutely positive that the word clusterf#!ck was created here by some Westerner riding in a taxi around Delhi. In my month here in India, I heard someone say – traffic in India is like a functioning anarchy…I thought that it was a perfect way to describe the orderly craziness! And I do believe that you’d have to be crazy to take on driving in India !

Anything with a wheel is considered a drive-able vehicle out on the public streets. Bikes, scooters, tractors, wagons, wheel barrels, and rickshaws are all road-worthy vehicles. I could write about specific experiences regarding the traffic for hours â but I wonât put you through that. Instead, I have collected some of the common rules, or lack of rules about driving in India.

My best advice to you is NEVER, and I mean NEVER try to drive yourself in Indiaâ¦itâs suicide. We Westerners just have no idea when it comes to 3rd world driving â so donât even try. The rules are that there are no rules.

6 Years later, I actually did drive myself in India! Read all about it!

6 years after my initial visit to India, I decided to take on the biggest challenge I could think of, driving a Rickshaw across India – all in the name of charity, and insanity. Read about my Rickshaw Run experience and watch the video to see just how crazy that traffic is!

What to Expect When Driving in India 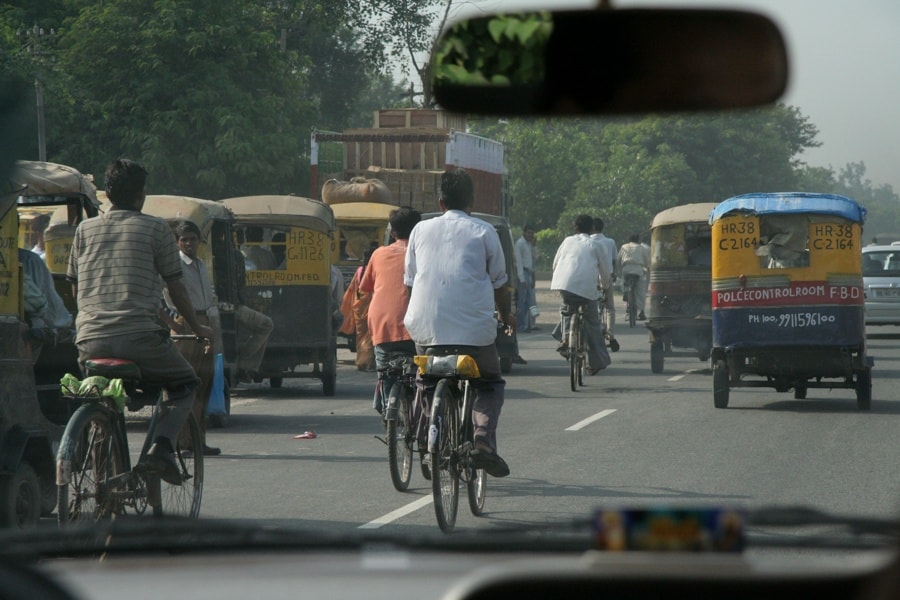 If there are lines painted on the road that make up 3 lanes â that means that there is room for 5 lanes of traffic leaving about 1 inch of space between cars side by side hurtling down the road. The equation is simple â you normally double the amount of lanes that are painted on the road (including the shoulder of course!), and then subtract 1. Granted, some of this depends on if there are bikes, auto rickshaws, or cars â but on average â this equation is correct. Remember, in India â there is no such thing as personal space, even on the road. 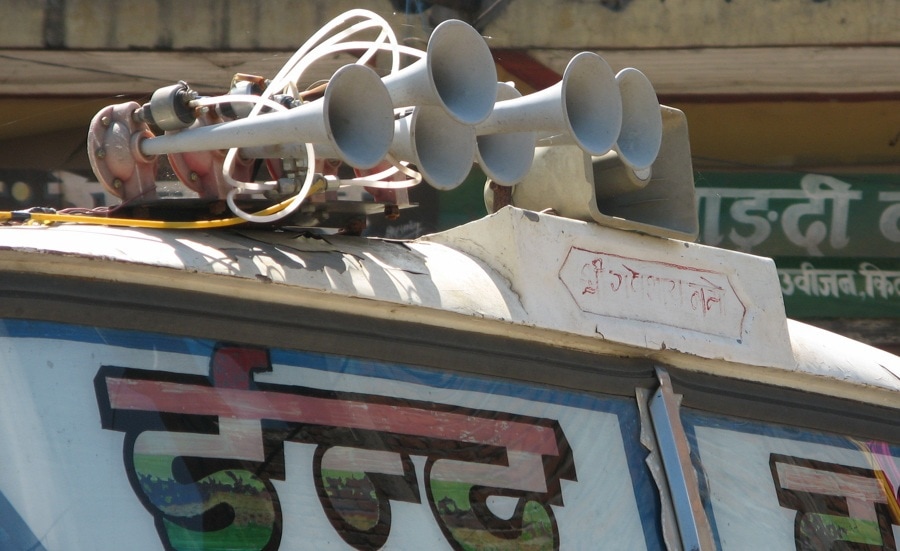 I am convinced that in order to pass your driving test in India, no eye test is necessary. However a hearing test is mandatory. The horn is probably the 2nd most important equipment on a car or vehicle. The first being the steering wheel. In fact â on most large vehicles such as trucks â they painted on the back in cutesy little colorful letters âHonk Pleaseâ. This is because there are no side mirrorsâ¦as they take up too much space in the narrow lanes of traffic (see Lanes above) â instead â all you need is a horn. It is not the drivers responsibility to check before changing lanes, instead it is the person/vehicle that flanks them responsibility to honk their horn to announce their presence. If you donât announce your presence â then prepare to be hitâ¦plain and simple.

Beware of Buses when Driving in India 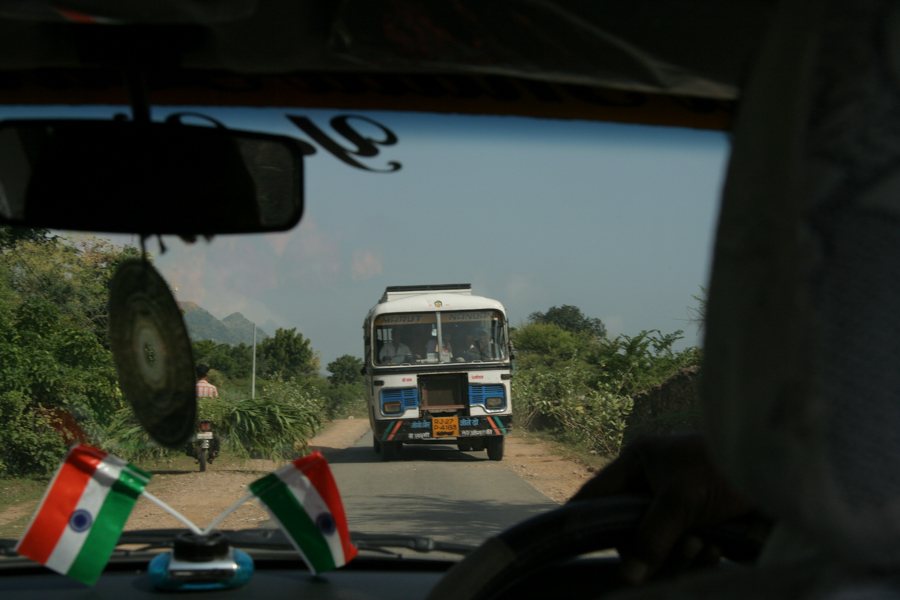 The big story in Delhi is about the Blue Busesâ¦death on wheels. The drivers donât have any qualifications to drive them and about every other day there is another person crushed by a bus. The papers keep a death count daily and write about it. The people are infuriated and are calling for the government to do something about it â but no progress seems to be made to this point. Basically â I stayed as far away as I could get from any bus.

The huge buses look like they just came from a demolition derby. They are this mess of twisted metal spitting out toxic fumes commanding their presence in the street. For the locals that are brave enough to ride the bus â itâs no easy journey.

There are no real bus stops. Sure â people do wait by the side of the road in places that look like bus stops â however when the bus comes â it doesnât really stop â you have to run to get on it most of the time. Letâs just say that they arenât handicap accessible. So â people are taking running leaps to get on the busâ¦and then getting off the bus is more of the same. Yet, it is one step worse â if the bus does stop to let people out â it doesnât necessarily do it on the side of the road. No, no, no â that would be way too sensible and safe â instead â they let people out of the bus from the 4th lane of 6 lanes of traffic. Imagine if you are in a car and the bus has just let people out in the middle of the street â now there are people stepping out in the middle of moving traffic that you have to watch out forâ¦or not. Mainly those people just fend for themselves and dodge in front of cars and find narrow spaces to make there way to the side of the road.

Stop lights are truly optional. When coming upon a red light, simply lay on the horn as you speed through the intersection (see Horn section). People run red lights because to sit and actually wait for a red light is excruciating. Stop lights are looonnngggg. I once noticed a Walk /Donât Walk sign with a little countdown display. Iâve seen these in other countries before â they are nice as they start counting at 13 or so and you know how much time you have to cross the street. In Delhi I saw a countdown sign starting at 200. I am not joking. 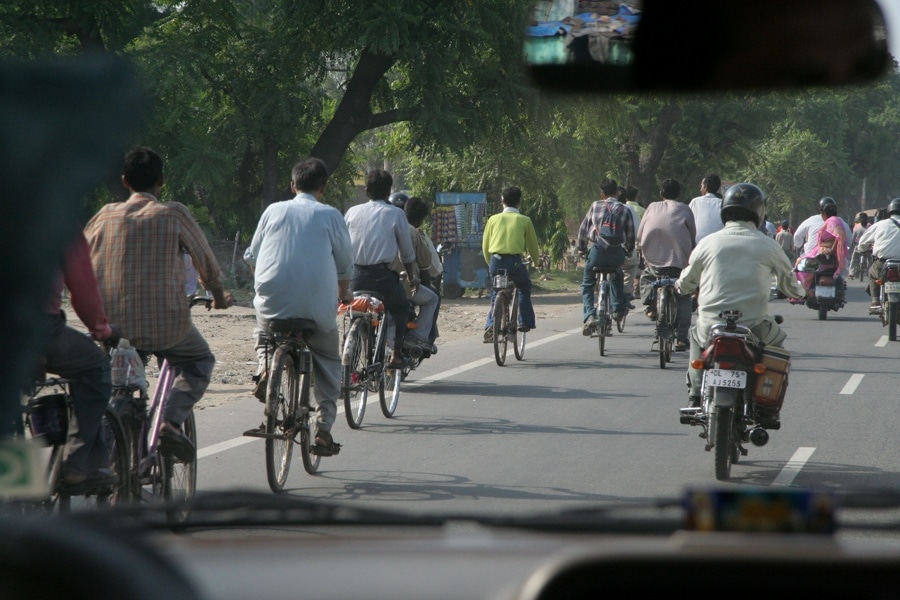 One would think that in a culture where elders are highly respected, hospitality of over the top, and tourists seem to be king â that they may cut you a break and let you cross if you make eye contact with the person â not so. First off, there are no real cross walks, and if there are, it doesnât matter as no one obeys the traffic lights (see Stop Lights). So â you stand by the side of the road and eventually â you have to step out into the mayhem and try to cross. You look and see a free space, but quickly get stuck about 3 lanes in and stand there while cars and buses whiz by you without even trying to slow down and avoid you. You inch out a little more and try to make direct eye contact with the person and even go as far as waving your hand in the stop position â clearly demonstrating that you are trying to cross and they should let you pass as you are only a human vs. a metal vehicle after all. However, they will run you over without even thinking about itâ¦but, if you are a cow, or happen to be riding a cow â then you have a âget out of jail free cardâ Cows stop trafficâ¦humans donât. Whenever possible, find a cow along the side of the road and let it lead you across the busy street â thatâs really your only hope of coming out on the other side alive.

If after reading this, you still feel like renting a car and driving in India, then you are crazy enough to maybe get by ok in Delhi traffic. Good luck!

5 Responses to "Driving in India"