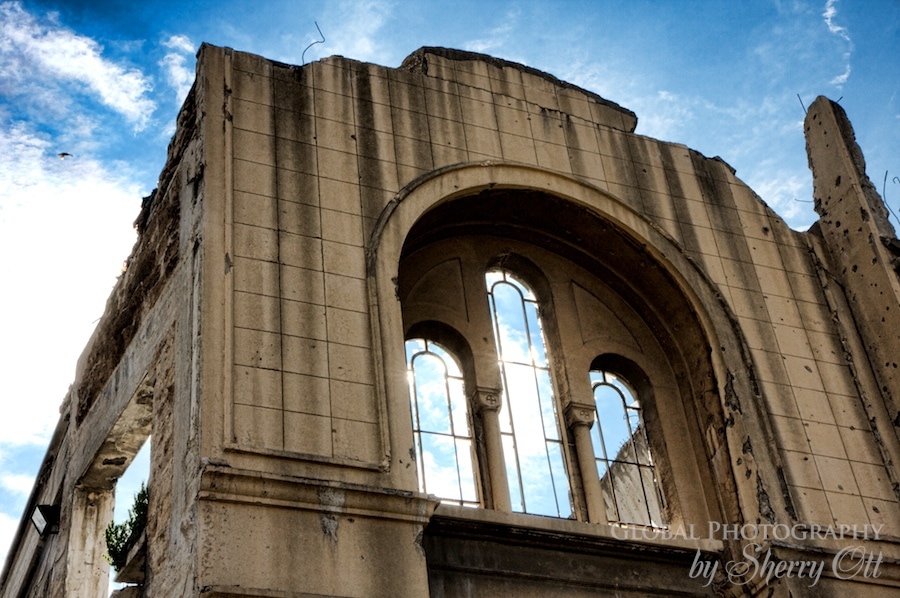 Bombed Church in Beirut...still stands leaving a constant memory of the war

Today was my day to go walking through time; a walk through downtown Beirut photographing the bombed buildings which still exist in the Beirut skyline.Â  I was in shock of the hundreds of bullet holes scarring the buildings and thatâs when I saw him; a security guard of some type motioning at me. I immediately thought â crap Iâm busted â Iâm not supposed to be wandering around the outsides of these abandoned buildings taking pictures. I started putting away my camera and started my âIâm just a touristâ act and I realized he was coming closer and still motioning towards me. However the more I looked at him, I realized that he wasnât telling me to go away, he was telling me to âcome hereâ.

I started walking towards him and quickly realized communication was going to be difficult as he started talking to me in French. He kept motioning for me to follow him in a harmless way and I decided to keep following. Soon, he was leading me closer towards the bombed out church where there were tarps covering much of the lower levels. He went over to the tarp, and pulled it up motioning for me to look inside; he was giving me the âforbiddenâ view; and it was worth it. It felt like a whole different world underneath that tarp â trees grew inside the skeleton of the building and holes were in the ceiling. He continued to give me a personal tour providing access to areas I wouldâve never seen on my own. 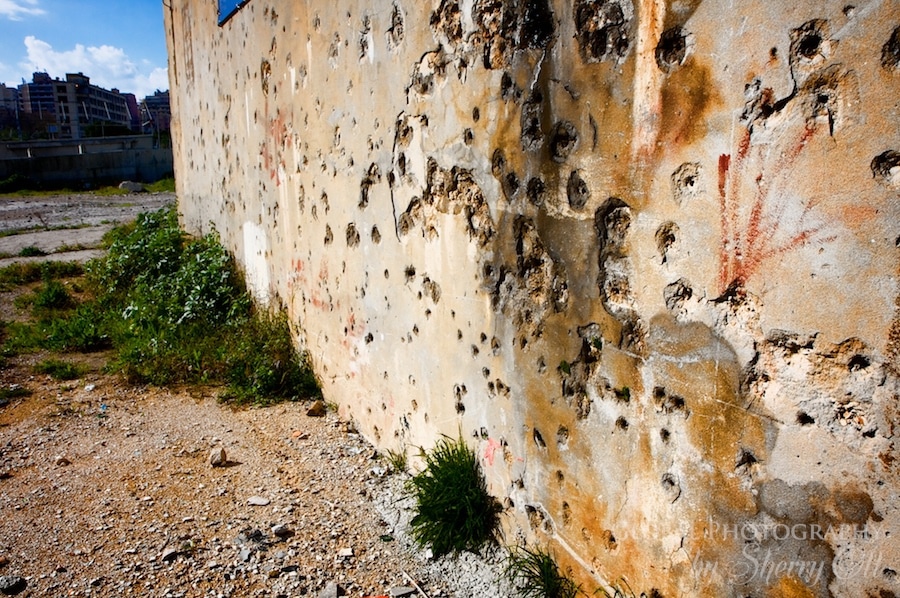 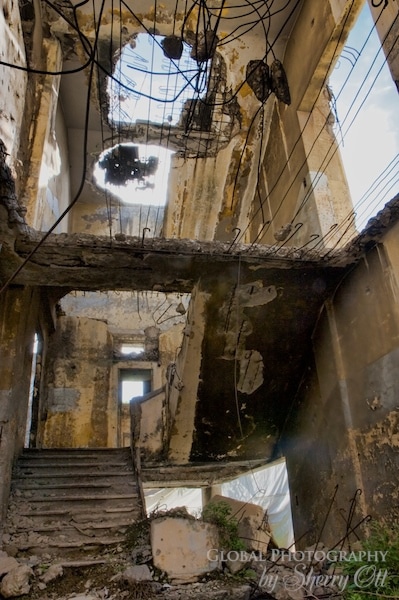 Going inside - a view not many people get to see 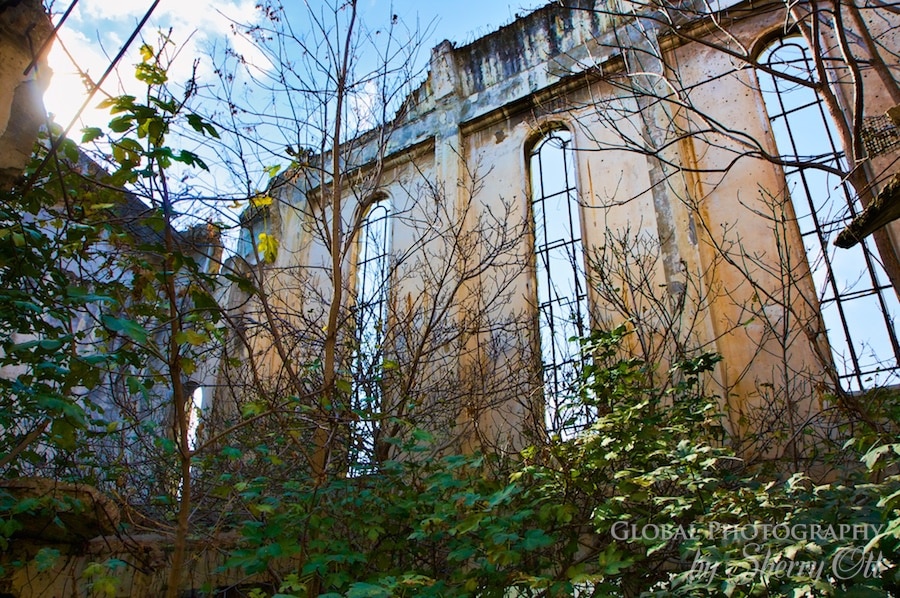 Mother nature has taken over inside this bombed church

Then he motioned to the big remnants of the cinema across the street. This building is affectionately referred to as âthe eggâ and has had a scarred history. It wasnât actually destroyed from the war, but instead itâs been in war of politics and historical relevance. Sure, itâs been scarred by the war like all of the buildings in downtown, but the question of its final demolition hangs in the hands of the people â and no one can agree on it.

I looked at him in surprise and said âokâ , starting to wonder if I should be following this stranger into abandoned buildings. But instincts said it was ok â plus, of course I didnât want to pass up the chance to walk inside this crumbling building; the eyesore of rebuilt downtown. It seemed to be the reminder of the past that exists in small doses in Beirut. Everything was new around it, and then there was this scar â ‘the egg’.

I followed him past the fences and into the building. He started walking towards the stairs. For a moment I questioned how stable they were, but continue to follow him. We went up two flights and emerged from the stairs into a huge open theatre area; all that was left was concrete and rebar. I noticed the exposed nails on the floor making myself aware of the fact that I wasnât really dressed properly for such an excursion in my cute little ballet flats. I watched my step and he took me up the theatre seating to the big opening where the building ended. He wouldnât allow me to go to the edge and instead let me shoot in peace. 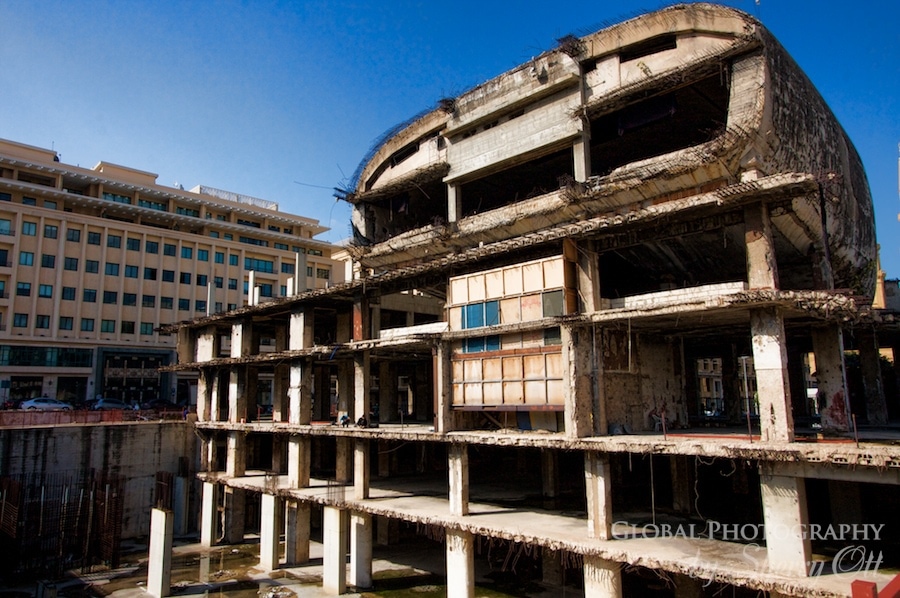 The 'scrambled' egg of Beirut 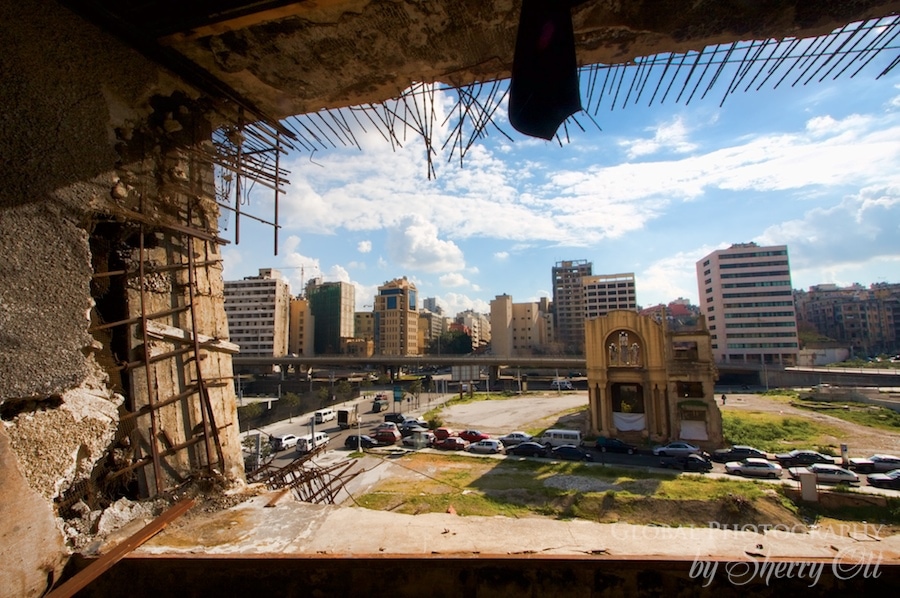 The view of the new from inside the old wartorn egg

A few minutes later he asked me, âWhere are you from? Germany, Switzerland?â in feeble English. I hesitated and my brain went into overdrive; shit â do I tell him Iâm from America. We arenât exactly liked by Lebanon thanks to our association with Israel. But before I could think to much I said, âIâm from America.â In the most apologetic voice that Iâve heard come out of me. There was a slight silence and then he smiled noting my hesitant answer. He said â âItâs ok! We like America. â A slight pause and he continued, âIsrael, no likeâ as he shook his head in disgust.

For my personal tour he required a hug as I said âYella, Thankyou.â and I walked away.

In addition to these two buildings, hereâs a few of my favorite photos of Bombed Beirut â and beyond: 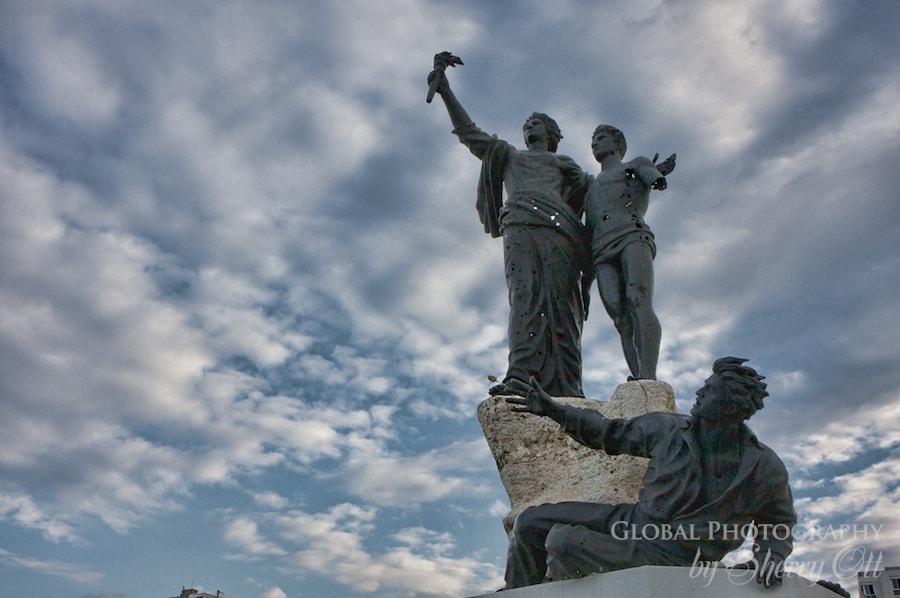 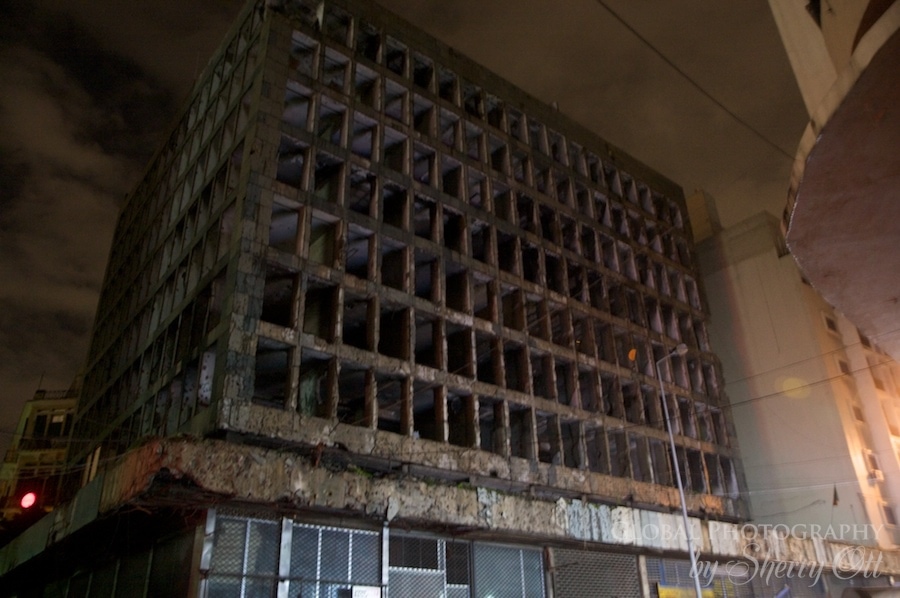 Bombed buildings take on an eery feel at night 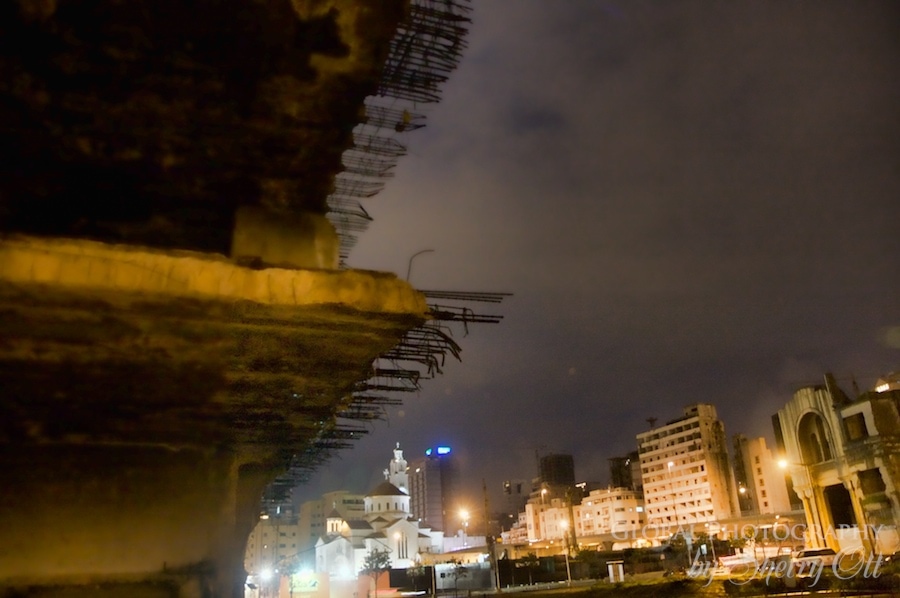 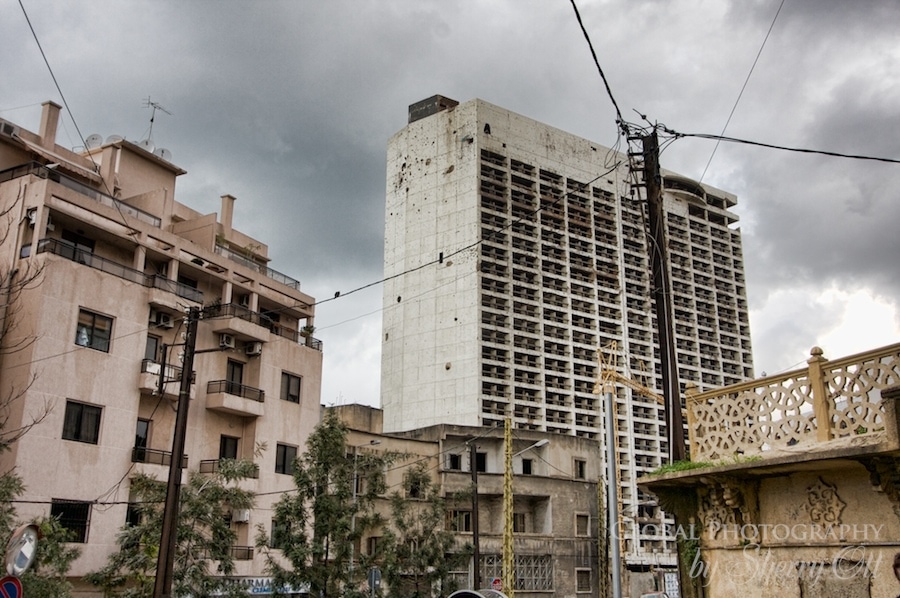 The Bombed Holiday Inn stands as a reminder