âWhy did you come here in February? Itâs the worst month for weather; itâs so unpredictable.â This was the common question I was asked throughout Lebanon. The sky was heavy with moisture and dark clouds rolled in over the Mediterranean; it was pouring rain yet again. The taxi driver dropped me off near the medical gate at AUB, American University of Beirut, and gave me a sheepish smile as I got out of the cab, expanded my umbrella and stepped out into the wet street.

This rainy Sunday I was scheduled to take a walking tour of Beirut and I didnât want a little rain to stop meâ¦again. I was actually planning to take the tour the previous weekend, but it had been rained out due to torrential downpours (seriously, it was raining sideways). But this weekend, Ronnie confirmed the predictable unpredictable February weather would not stop the tour so I showed up with an umbrella eager to finally learn more about this unique city on foot.

I had accidentally happened upon this walking tour while surfing around the internet for information about Beirut. I was scouring the events/activities section of Time Out Beirut online and came across Ronnieâs walking tour, Walk Beirut. I immediately was interested; it lasted 4 hours, it was a way to get some exercise, and it promised to be full of the Beirut war and rebuilding history that I was constantly trying to understand. It was to cover a large part of downtown Beirut which I had already walked around on my own, but this would actually allow me to get some answers to my many questions about the buildings, the rebuilding, and the long drawn out war.

A raincoat and umbrella clad crowd gathered at the AUB main gate. As each new person walked up they asked if this was the Beirut Walking Tour and Ronnie personally greeted each person and shook their hand. Ronnie is the mastermind behind Walk Beirut and he’s a former student of AUB.Â Â  His family is Lebanese and lives in Beirut, but they also lived in the States during parts of the civil war.Â  All of this means that he has a great grasp on the Lebanese history as well as a good understanding of what tourists might want or expect.Â  He started the Walk Beirut tour in June 2006, but had to cut it short following the war with Israel in July and August that summer. Tourism more or less disappeared until early 2009, and he brought the tour back to life that year, in April 2009, and it’s been ongoing since. 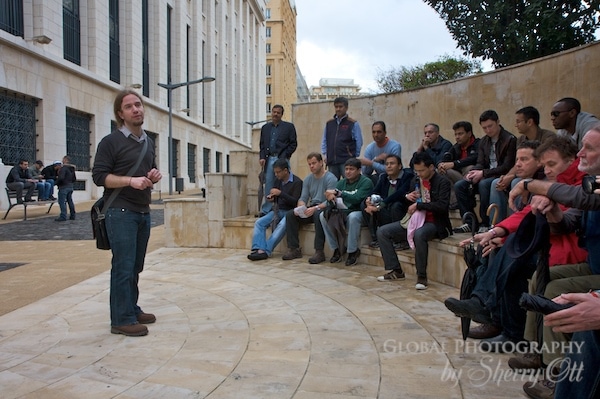 Ronnie teaches us about the Roman Baths as we take a load off our feet!

Ronnie started out by providing some general background on Lebanon and AUB university. Then he went on to start explaining that Beirut had been embroiled in 15 years of war from 1975 to 1990 of which the primary unrest occurred in downtown Beirut very near where we were standing. Miraculously, as we started walking away from AUB, the rain trickled to a stop and all of the umbrellaâs were packed away; even though the sky still looked like a water balloon ready to pop.

We walked on to the Banque du Libon which isnât a particularly memorable building, but Ronnie used it to provide the background on the current Lebanon political/religious structure, how businesses are tied into religious quotas, and why the American dollar is such a key currency in Lebanese life. With 18 recognized religions which must be represented in government itâs no wonder Lebanese politics are super confusing.

We walked our of Hamra and towards the are referred to as the Green Line in the war. Here Ronnie provided some background on the mix of architecture (Turkish, Frecnh, and Lebanese) you see peppered throughout Beirut. Most fascinating was the explanation around why old dilapidated building still lie in disrepair admist fancy new condos and refurbished homes. This was one of the things that had confused me during my time in Beirut. There wasnât necessarily a âbad part of townâ, instead there would be these abandoned looking bombed out buildings standing among shiny new ones. Upon closer look though, the buildings were abandoned, there were people living in them in a seemingly unlivable situation. Due to complex rules around rent control and family ownership these buildings were a constant reminder of the confusion that Beirut exemplifies. 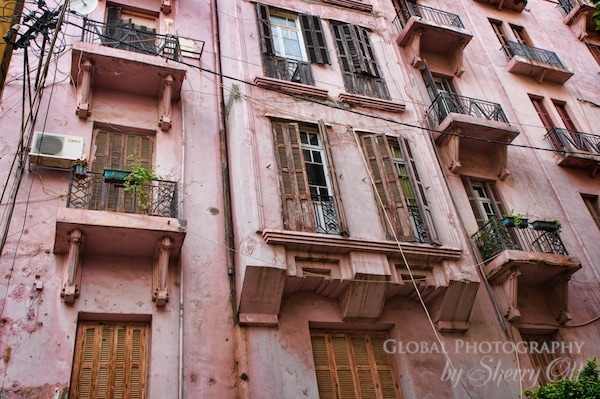 The run-down buildings are still standing 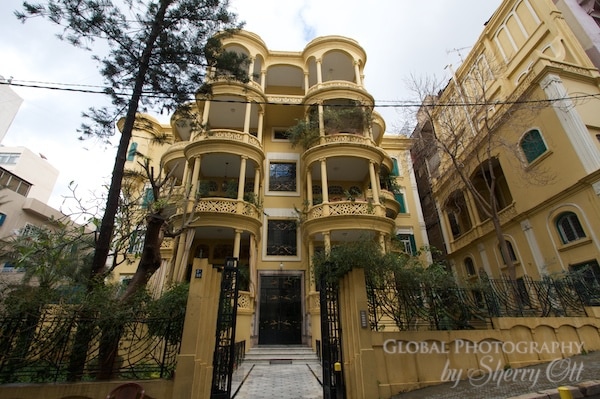 The refurbished home next door...

Next we walked deep into the war history by dissecting the most impressive reminder of the war â the Holiday Inn. If you are in Beirut, then youâll run across this abandoned war beacon sometime during your stay no doubt. Itâs hard to miss aprox. 30 floors of concrete pocked by bullet holes. It hovers over the corniche and the Mediterranean for everyone to see. The Holiday Inn was open for exactly 1 year from 1974 to 1975 and was originally the largest Holiday Inn in the Middle East. But in 1975 it became the focal point of the war as it overlooked the Green Line which was the heart of the fighting for 15 years. Due to the complex landlord ownership rules it still stands and is owned by the Kuwait royal family with no real intention to do anything with it in the near future. Currently the space is let out to the Lebanese army and they store various equipment in the ground floors. 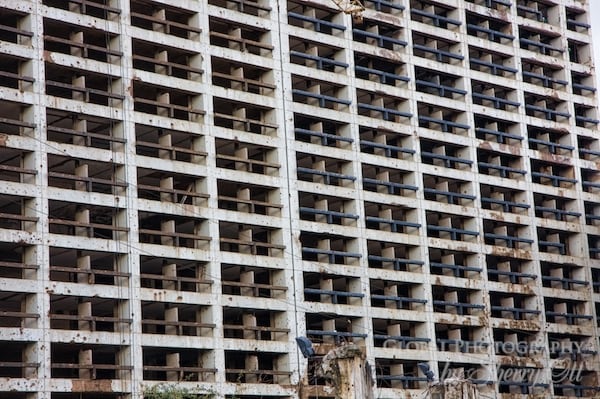 Next we crossed over into the major rebuilding areas of Beirut. We learned all about how Solidere is the company taking on the challenge of bringing the city back to life and rebuilding downtown. It seems as if Solidere is equally loved and hated, but is probably pretty par for the course in Beirut. We walked through a heavily secured area, the old Jewish quarter of Beirut and saw one of the only synagogues in Beirut. This area was heavily bombed during the war by the Israelisâ¦.yes Israel. Opposition groups stored arms and artillery in this area thinking Israel wouldnât bomb their own areasâ¦but in the Lebanese warâ¦nothing was off limits. The neighborhood was flattened.

We moved forward towards the heart of downtown by moving further back in history to the time of the ancient Romans and saw the old Roman ruins that lie beneath the city. They seem to be completely overshadowed by the rest of the fascinating Lebanese history, but it was an interesting stop in this diverse landscape of Beirut. We also walked into the main circle which was full of French colonization history and which had also been leveled during the war. However, this area was the jewel of the Solidere project as it had all been refurbished and rebuilt to be a shiny new home of Beirut tourism. Shops and coffee bars lined the spoke-angled streets which all led to a central clock tower at the hub. It was here where we took a short 20 minute break to get some coffee, snacks, or use the facilities. Considering we had already been walking for 3+ hours, it was time for a break. 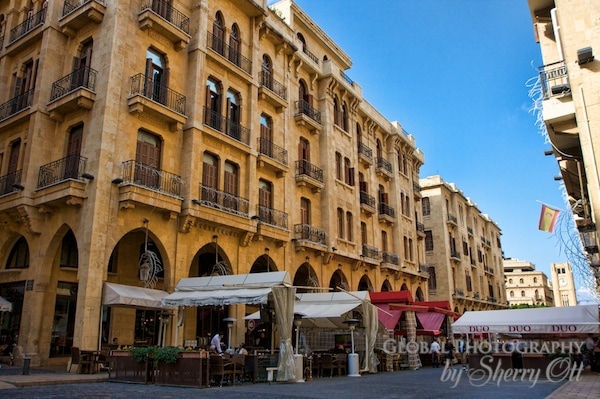 The rebuilt downtown full of coffee bars and shopping

Apparently Mother Nature all felt like it was time for our break as during our 20 minutes of free time she decided to burst the water balloon and relieve the skies of their misery as rain pelted down with force. Luckily, our little tour group led a charmed life as we watched it rain from the shelter of coffee shops. As if Mother Nature knew Ronnieâs tour schedule, she stopped right when we were supposed to meet again and continue our walking tour. 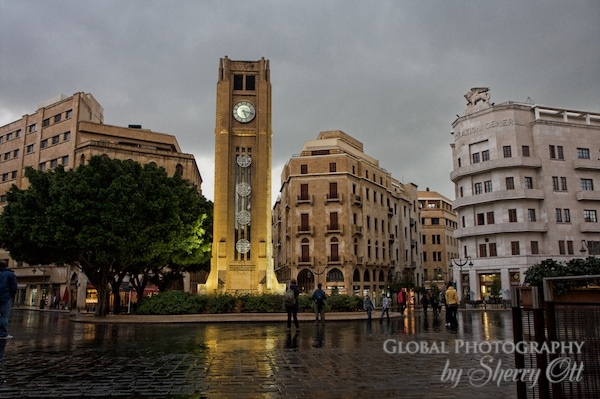 It was getting quite dark and the wet streets provided a bright reflection of the streetlights, but we walked on learning about the recent history in Beirut â the history of the last 5 years. This tumultuous time was equally disturbing as the civil war considering it was full of 15 assassinations of Lebanese leaders in the short span of about a year. We stopped at Martyrâs Square where Ronnie provided us a very informative explanation of itâs history from France occupation to the civil war to the recent Cedar Revolution. It was clear that this square was the focal point for Beirutâ¦the new Beirutâ¦the one full of hope. 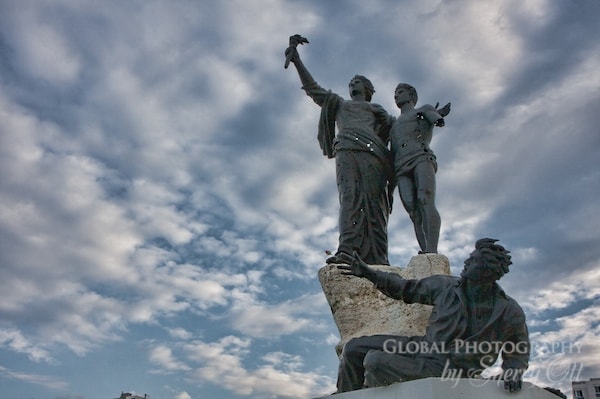 It was completely dark by now and we continued to walk through old bombed out neighborhoods which had yet to be slated for redevelopment. It was eerie and at times felt as if we were walking through a giant haunted house and I braced myself for some goblin to jump out at me. Ronnie led us to the neighborhood of Gemmayze which really signified the new Beirutâ¦the nightlife. Gemmayze is the place to be when it gets dark. Itâs lined with small little bars and cafes that go all night packed full of locals and expats enjoying the intimate surroundings. It was fitting that it was here where we ended out 4 Â½ hour walking tour as we all poured into a little bar for a celebration drink and a toast to Mother Nature for keeping us miraculously dry during our afternoon of walking. 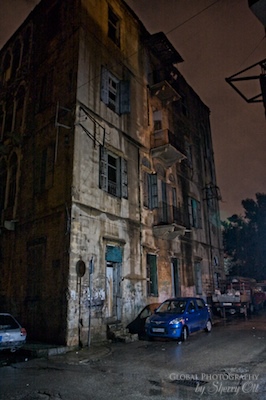 A haunting scene in Beirut at night

The tour was probably the most informative and useful time I spent in Beirut. I unfortunately taken the tour at the end of my month long stay in Beirut; however I see it as a the perfect âwarm-upâ for your arrival into Beirut. Ronnie provides you with a historical base, a map, and a thirst to explore more. I was thoroughly impressed by his knowledge, professionalism, and ability to handle a crowd of 30 to 40 people walking through the busy and chaotic streets of Beirut. I highly recommend the Beirut Walking Tour to be one of your first stops in Lebanon.

Tours run Saturday and Sunday in the winter months and cost $20US – a good value for 4 1/2 hours of walking and information!

Disclosure: Ronnie did provide me this tour free of charge; and I in return offered to buy him a beer at the end of the tourâ¦