8 Ways to Experience the Bay of Fundy 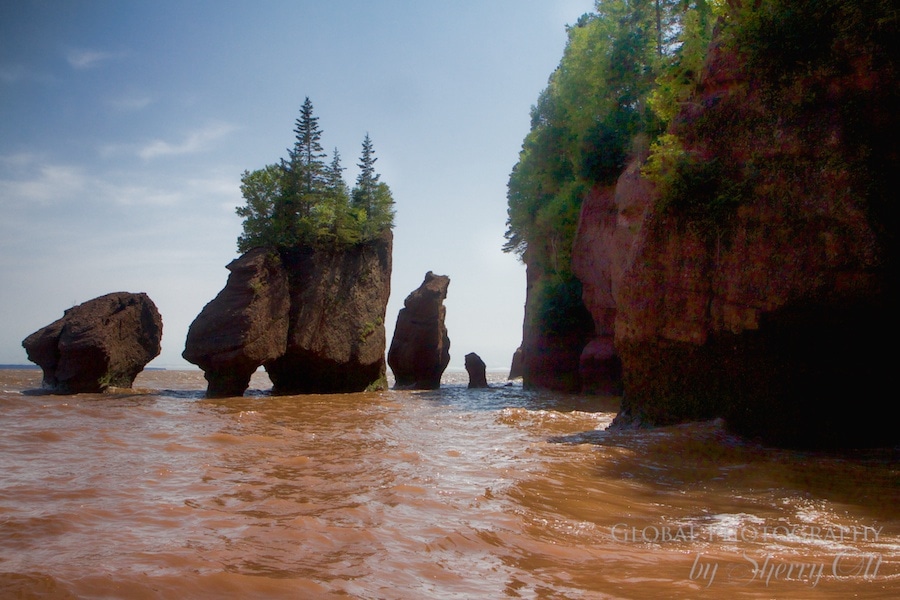 Bay of Fundy – there’s no shortage of activities and adventures

It rolls in, it rolls out. Itâs never still, much like me. Maybe thatâs why I am so fascinated by the Bay of Fundy. However, the Bay of Fundy takes motion to new levels boasting the highest tidal changes in the world rising and falling up to 53 feet a day in some areas. It compares with more than 600 unique landscapes in over 100 countries in the world that have been recognized as World UNESCO biosphere sites. I recently made a whole driving holiday with my parents to see this tremendous natural wonder. You may think going to see a body of water for a whole holiday is a bit odd, but itâs not simply a one hit wonder, there is more than you can imagine to see and do on the Bay of Fundy â from adventure to wildlife.

We spent a week road tripping in New Brunswick that borders one side of the Bay of Fundy with Nova Scotia on the other. I spent time on it, in it, and under it and was surprised at all of the unique Bay of Fundy activities.

Or if you want to go at a slower pace, you may want to park the car and hike or bike the trail. Thereâs a separate walking and biking trails that run along the drive too. In the middle of the trail youâll find the Big Salmon River Interpretive Centre providing historical information on the logging, fishing, and shipbuilding days near the Bay of Fundy. The drive goes as far as the Walton Glen Gorge/Falls observation deck.Â  Â It is an out and back experience, but the views are so nice who doesnât want to see it twice! 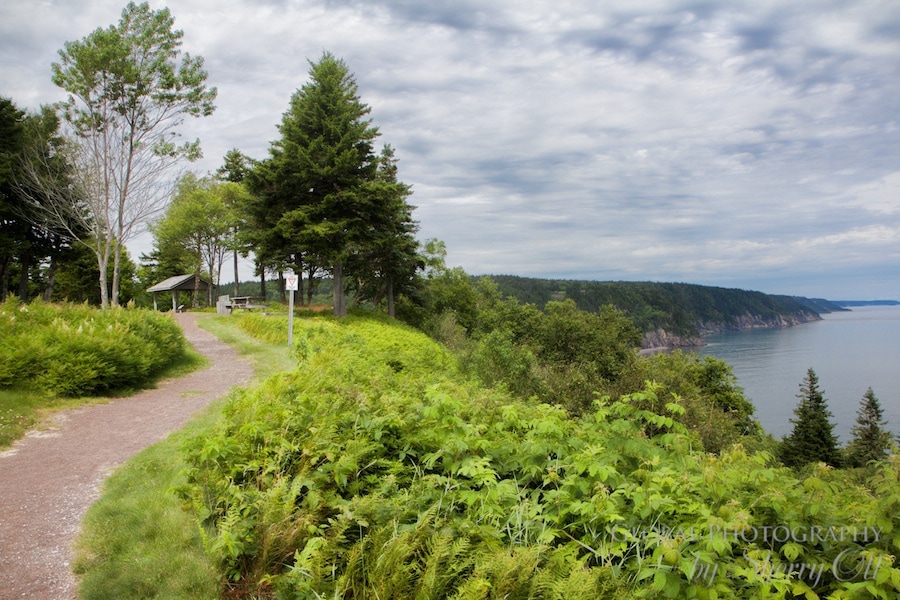 Bay of Fundy trail for biking and hiking 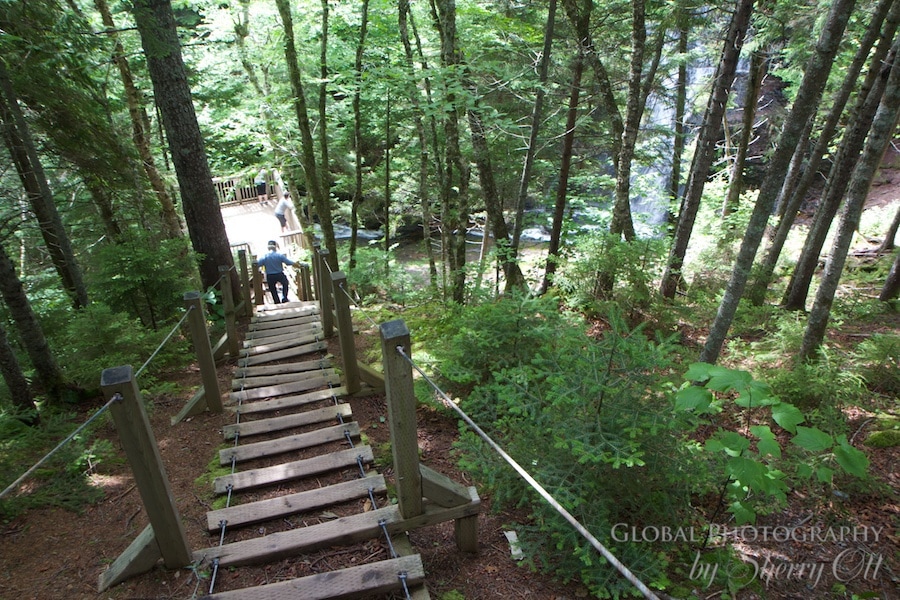 Bay of Fundy Parkway hiking to a waterfall

At the southern end of the Bay of Fundy in the little seaside town of St. Andrews you can hop on a charter with Captain Chris from Island Quest and head out through the foggy waters and hunt for humpback whales. Or if you are looking for something a bit more hands on â then you can actually go shark fishing (catch and release of course) also in the Bay. 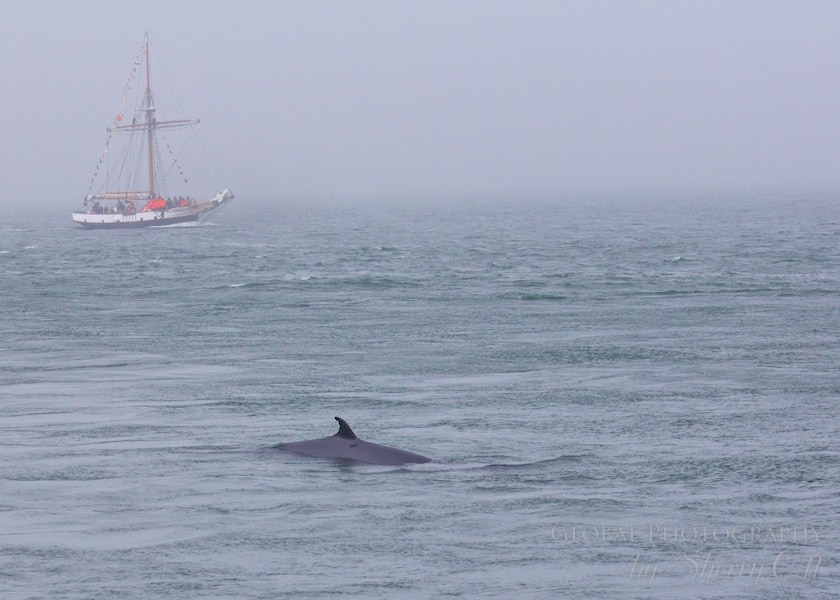 Humpback Whales seen in the Bay of Fundy

Stop and stay at Fundy National Park, New Brunswickâs first National Park. Running along the perimeter of the Bay of Fundy means beautiful hikes and trails. We did a small hike to a waterfall and covered bridge with our short time in the area. There is plenty of camping and other unique lodging options that will give you a great homebase for exploring more of the Bay of Fundy. Plus the park is the core area for the UNESCO Fundy Biosphere Reserve. UNESCO Biosphere reserves serve as models for demonstrating a balanced relationship between humans and the biosphere.
More Info: Parks Canada Fundy National Park 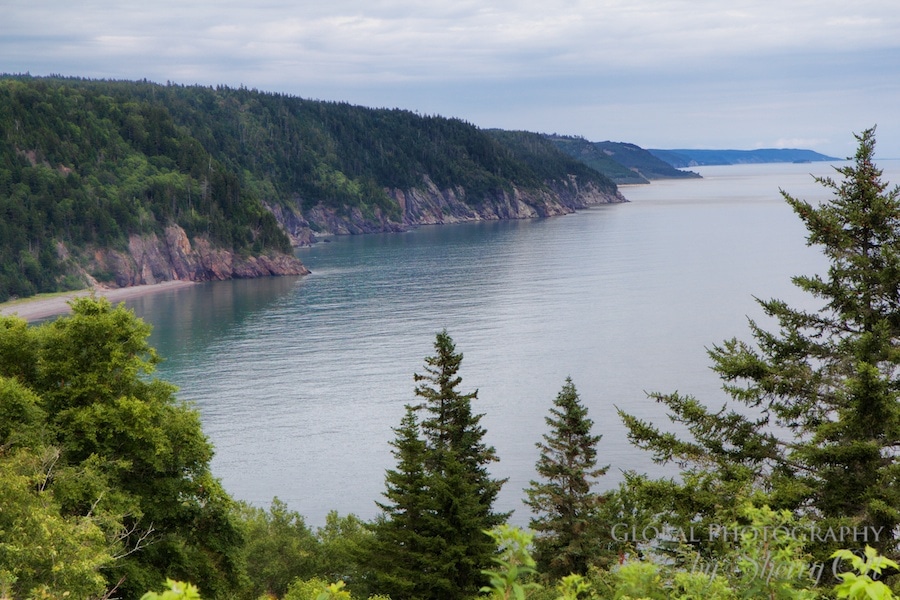 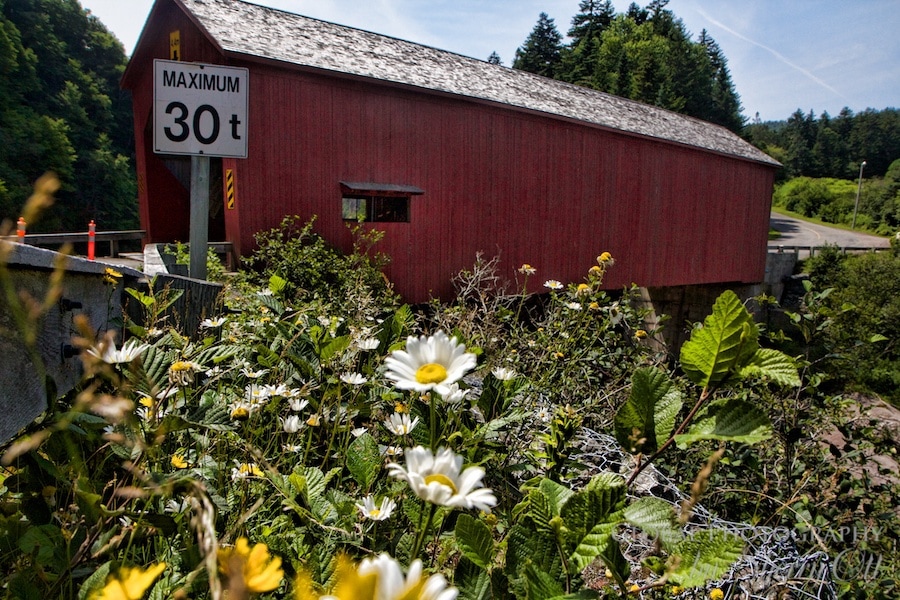 4. Walk on the Ocean Floor

Ever wonder what the bottom of the Bay of Fundy looks like? Just wait a few hours and youâll find out at the Hopewell Rocks. Check the tide timetable and follow the trail to the lookout point. Head down the stairs and soon youâll be walking on the bottom of the Bay of Fundy. Slightly muddy, but itâs worth it to walk through the archways of the eroded rocks also called Flower Pots. Sure, you can do this anywhere along the Bay of Fundy during low tide, but the tidal change is especially evident when gauging it against the backdrop of the unique weathered Flower Pots.
More Info: Bay of Fundy Hopewell Rocks 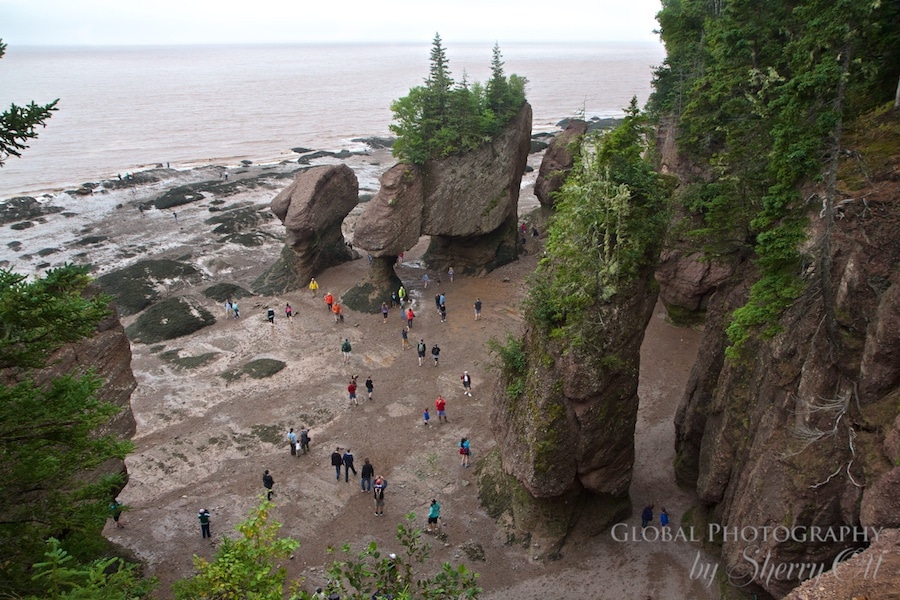 Walk on Bay of Fundy during low tide at Hopewell Rocks 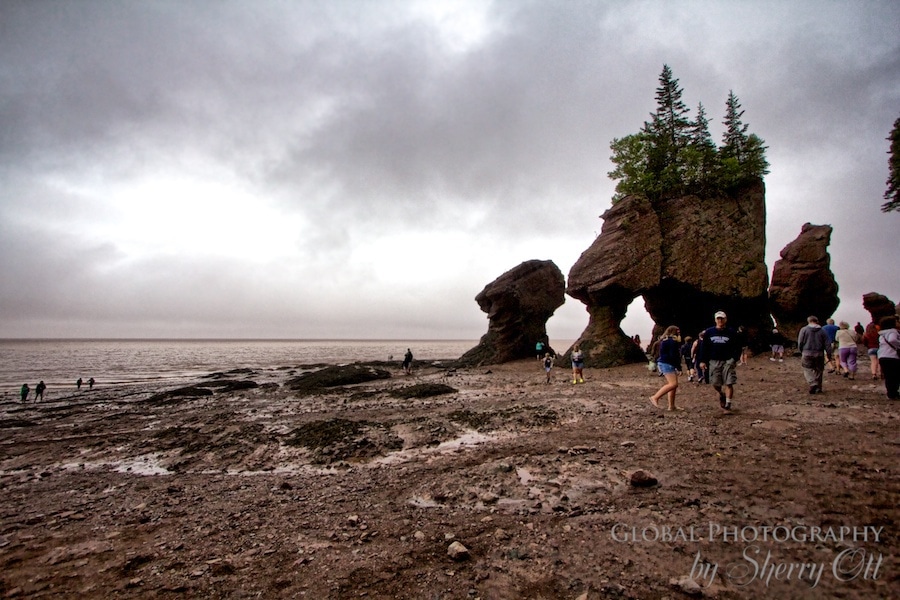 5. Kayak on the Bay of Fundy Around Hopewell Rocks

Wait a few hours and soon that same area that you just walked on near the rocks becomes filled with water and waves. My dad and I decided to get a new perspective and did a kayaking tour during high tide. It turned out to be a real adventure the day we went as the winds were wicked and the waves were powerful. It made it hard to maneuver the kayak near the cliffs and rocks, but my dad was a great sport and we muddled our way through it without tipping the kayaking and going for an unwanted swim!
More Info: Baymount Adventures 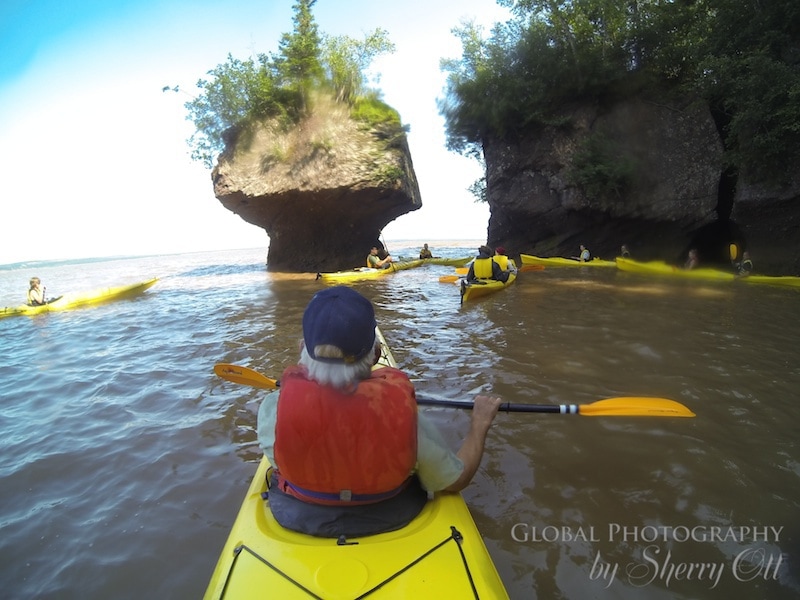 Kayaking around the Flower Pots

6.Â  Take a Seat and Watch the Tide Roll In

Want something a bit less active â then just take a seat in one of Maritime Canadaâs famed, colorful Adirondack chairs and simply watch the tide roll in or out. I suggest you take a seat in Alma behind the Parkland Village Inn. Owner Andy and his crew has a number of chairs set up that allow you to watch the fishing boats go out and come back in at the appropriate time.Â  And while you are waiting, why don’t you enjoy a fresh Bay of Fundy lobster too!
More Info: Parkland Village Inn Alma New Brunswick 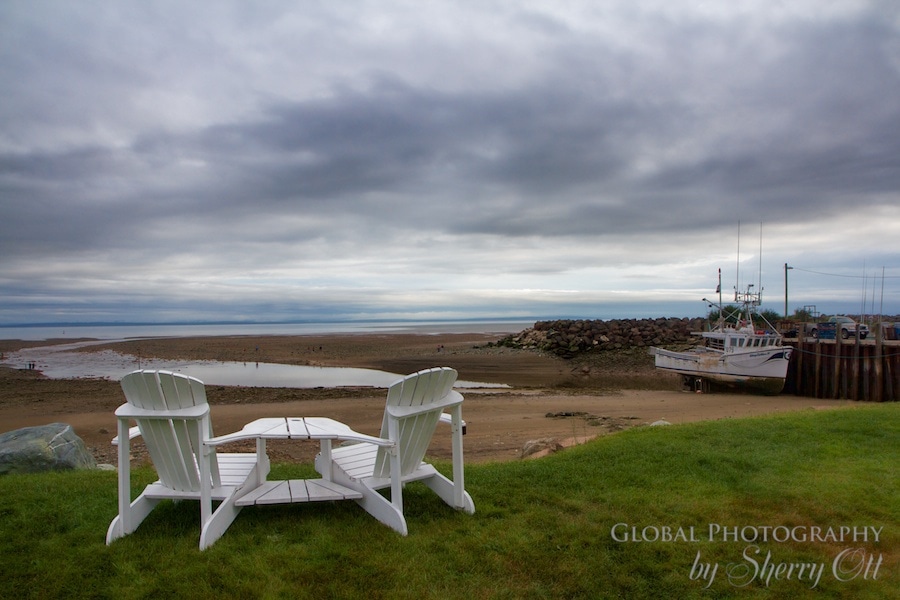 Watch the skies above the Bay of Fundy to see one of the largest populations of shorebird migrations happen near Hopewell Rocks. Each July 1-2.5 million shorebirds (up to 75% of the worldâs population of the Semipalmated Sandpiper) congregate in waves at several key locations in the upper reaches of the bay. The Bay of Fundy is their only stopover on a 4,000 km migration south. Itâs like watching an interactive art display as the bird fly, dive, and glide in a quick swarm â itâs absolutely mesmerizing. 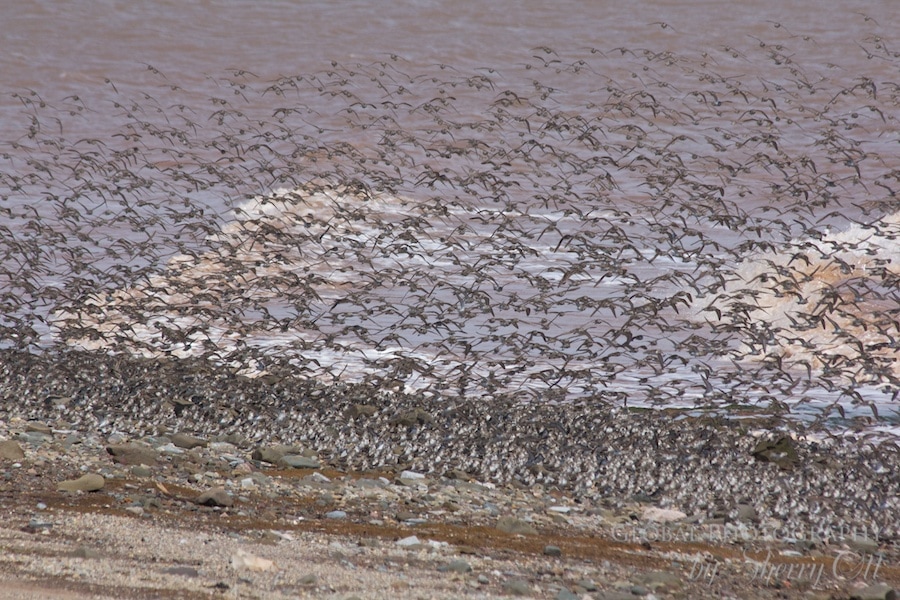 Are you ready for this â you can even surf on the Bay of Fundy â sort of. Stop at Bore Park in Moncton and take a seat on the bleachers to watch the tidal bore roll through the Pedikodiak River filling the riverbank with new fresh water every day.

Each day the tidal bore time is posted and there is a little talk before the tidal bore rolls through upstream into the river. The river is normally shallow and muddy and ends 79 km later in a little pond, but the Bay of Fundy high tide fills the riverbed twice a day.

Now â let me be clear about this â Iâm talking about a tidal bore, not a tidal wave. This is not some huge tidal wave â itâs simply a wave, but itâs special as it goes on for a very long time.

The tidal bore actually produces a surfable wave and it attracts surfers who are looking to ride the longest wave in the world. The day we were there to watch it there was one surfer making a valiant attempt. The furthest surfers have surfed the bore is 29km. This really is one of those weird phenomenaâs to go see and bring your surfboard if you are interested in breaking the record!

More Info: View at the Tidal Bore at Bore Park in Moncton 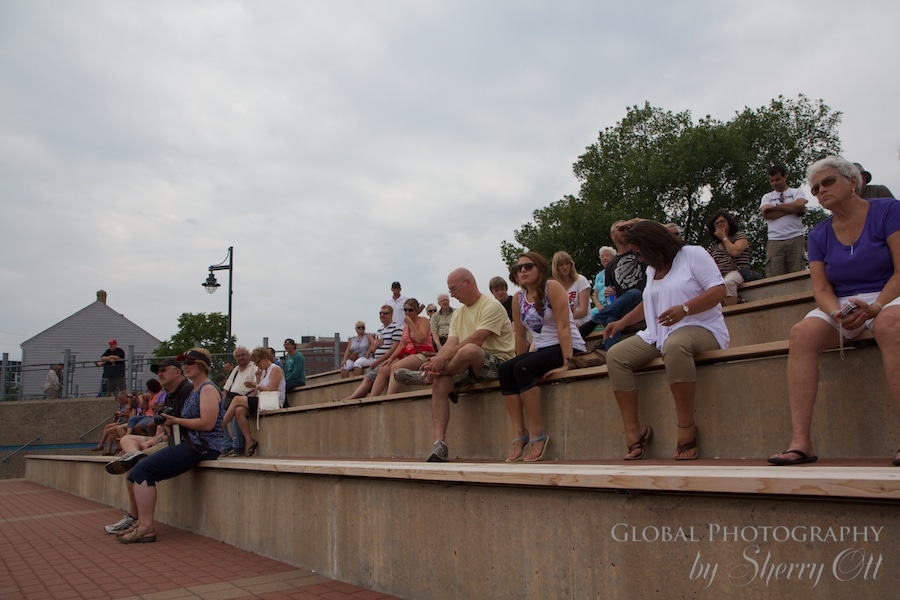 Now you have 8 options to choose from for your visit to the Bay of Fundy, which one would you do?

Disclosure: I was hosted by New Brunswick Tourism during my time around the Bay of Fundy, however all opinions here are my own.

11 Responses to "8 Ways to Experience the Bay of Fundy"