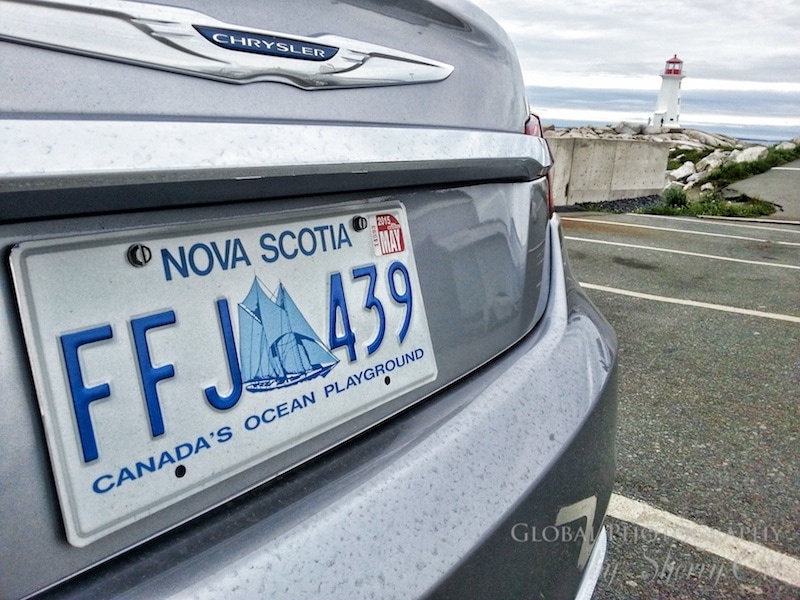 The Cabot Trail is constantly touted as one of the worldâs best drives â this section of Cape Breton in Nova Scotia gets all of the attention. However, as a self-professed underdog lover â I want to let you know that thereâs much more to Nova Scotiaâs highways than Cape Breton. In fact â thereâs a whole series of driving routes throughout Nova Scotia that deserve praise. Each are densely marked with their own logo which makes it easy to follow the route as it winds around towns, beaches, rural areas, and fishing villages. 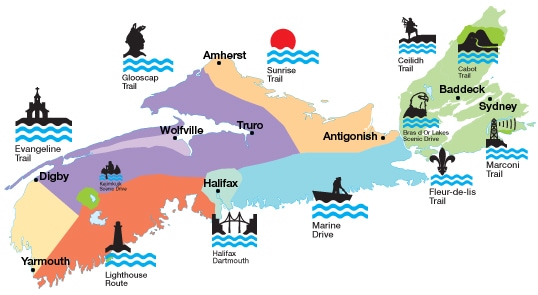 When I started researching Nova Scotia for our mother-daughter trip, I knew right away that I wanted to do a Nova Scotia road trip driving holiday â but I didnât just want to focus on just the Cabot Trail. So with the help of Visit Nova Scotia, we were able to put together a complete Nova Scotia driving holiday that would take us on the majority of the scenic travelways in addition to the Cabot Trail. I normally do budget accommodations and hostels when I travel solo, but since this was a trip with my mom, we splurged.Â  As part of the road trip we stayed in some of the nicest hotel and B&Bâs in Nova Scotia. All we had to do was follow the route markers, and we were treated to the generous local hospitality and stunning views! Here was our route, accommodations, and favorite restaurants on this Nova Scotia road trip.

One would think this route was full of lighthouses â but honestly we didnât see that many â but we did get a great feel for the seafaring heritage of the area. We left Halifax and headed for Peggyâs Cove to see the famous lighthouse and nearby quaint fishing village. We happened to get there as a big storm was arriving, so it was moody and bleak â perfect for photography. We also stopped along the winding road to see beautiful water views and outlooks. We stayed in the fishing village of Lunenberg and hunkered down for the storm.

Based on advice from locals we continued along the Lighthouse Route to the LeHave Ferry. We rode the ferry across with a local who invited us for coffee on the other side at the LeHave Bakery â a must for those along the Lighthouse Route! We stopped in the little town of Petite Riviere to do some wine tasting at Petite Riviere Vineyards and checked out some other great little art shops. The thing that stuck out to me on the Lighthouse Route was that the locals were so proud of their area â we sort of followed an unplanned trail of breadcrumbs along the route where locals had suggested we stop, visit, and eat at making this one of our favorite areas of Nova Scotia! 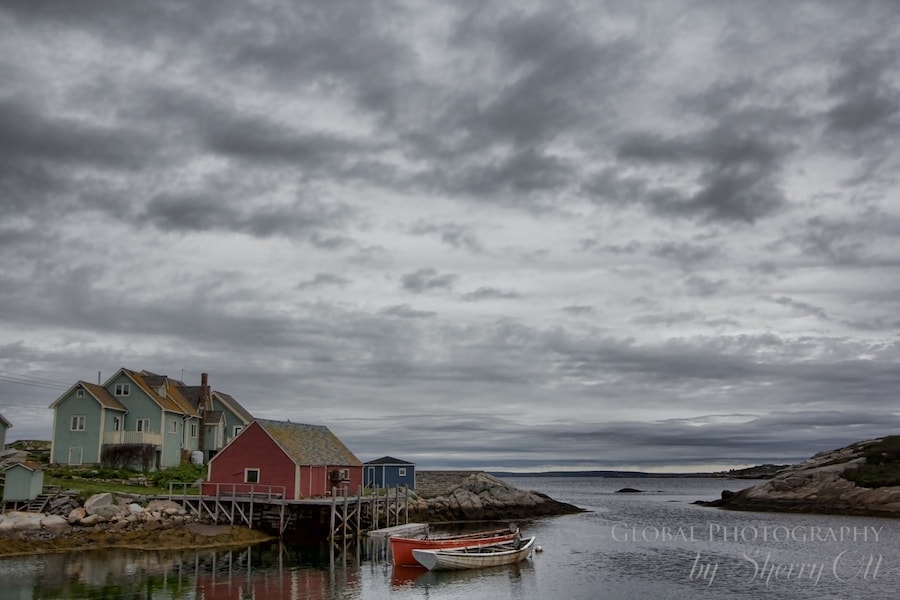 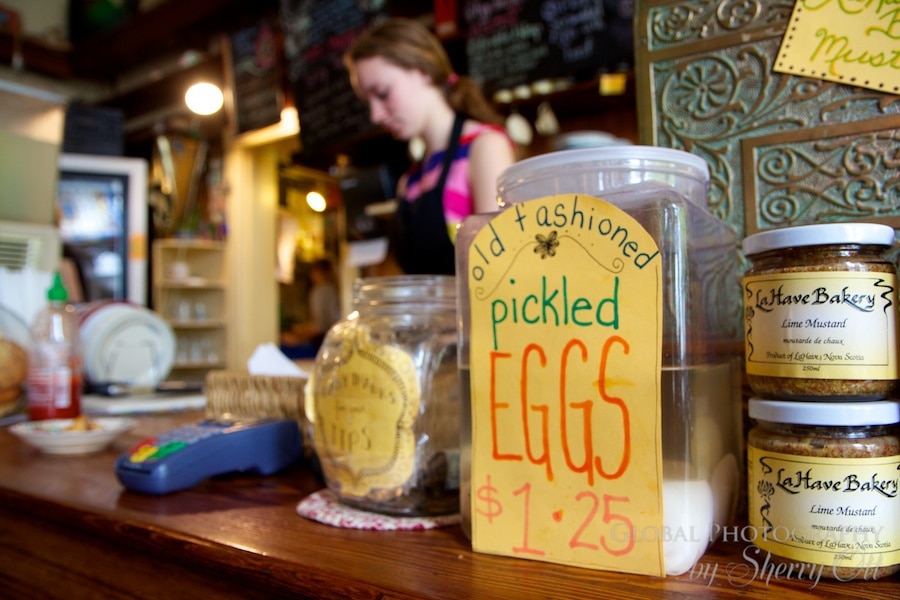 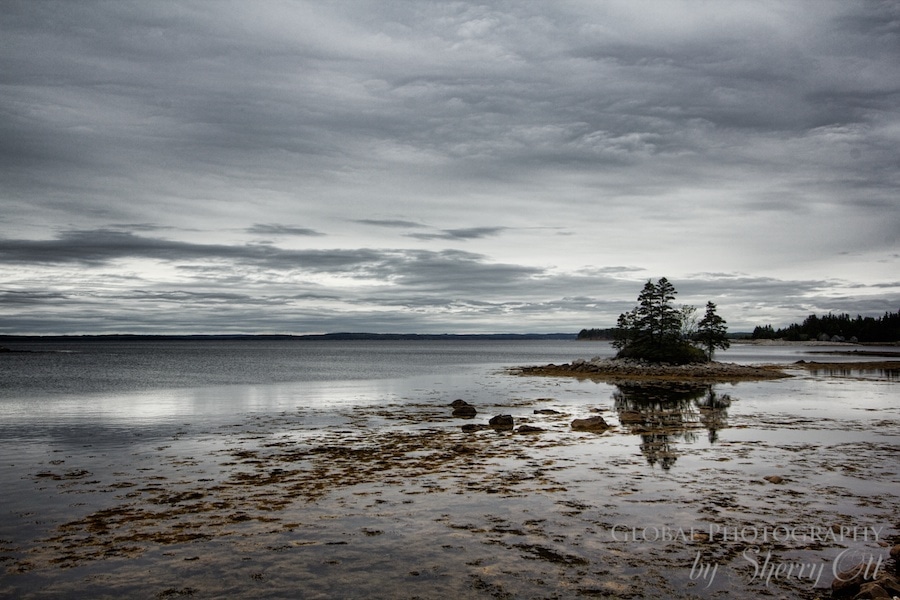 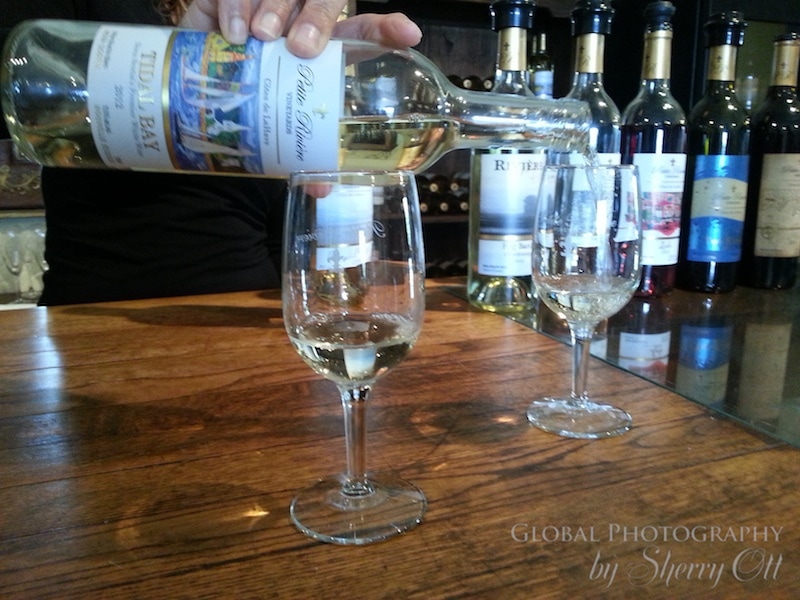 Petite Riviere Winery – stop for a tasting along the Lighthouse Route

This route skirts the Bay of Fundy and its miraculous tides, as well as gives you a glimpse into the farming culture of Nova Scotia. We stopped in Digby, known as the scallop capitol of the world, and got our first taste of seafood and the changing tides. We went onward to the oldest town in the North America, Annapolis Royal, and enjoyed the small town, fort, and bay views. We continued through the fertile farming land of Annapolis Valley, and then turned towards the rocky coastline to have some fresh lobster in Hallâs Harbour.

We took a detour off the Evangeline Trail and went towards Scottâs Bay where we could take a walk out on the bay floor during the low tide â a unique perk of this area! We then went back inland to charming town of Wolfville to stay at the Historic Blomidon Inn â a historic Sea Captainâs home turned into a B&B. After a long day of driving we enjoyed the flower garden and some pampering at the Inn. No need to venture out for dinner as the Inn served one of the nicest dinners we had in all of Nova Scotia. 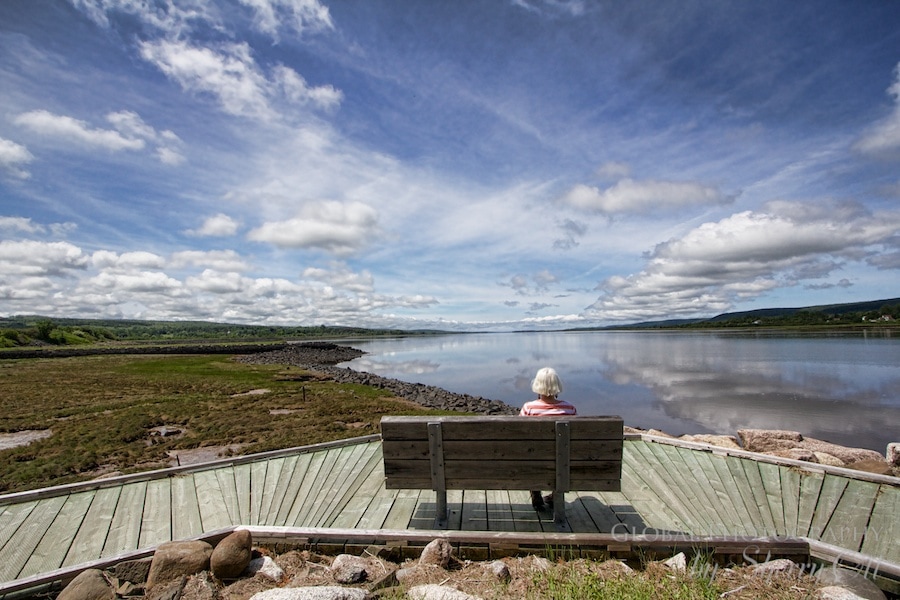 Boardwalk in Annapolis Royal along the Evangeline Trail 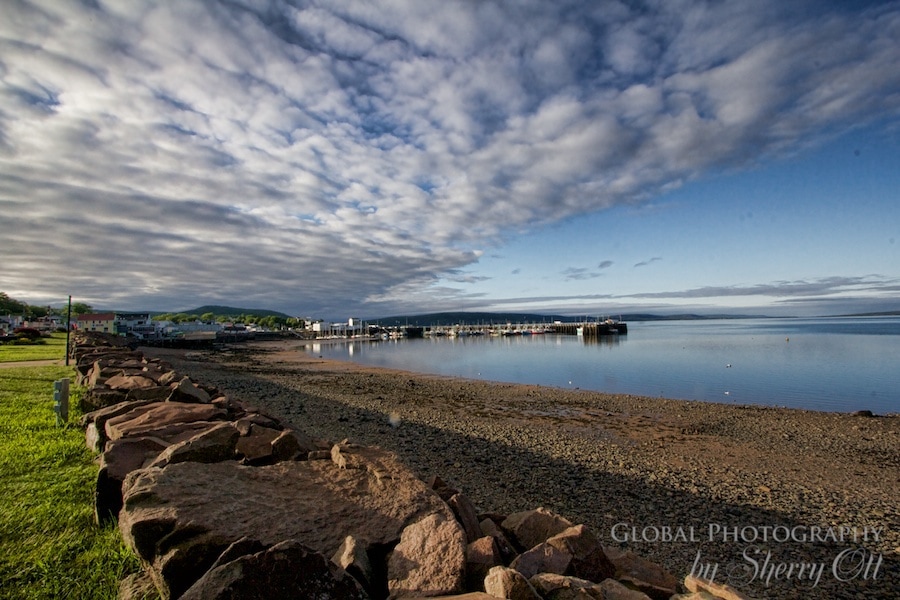 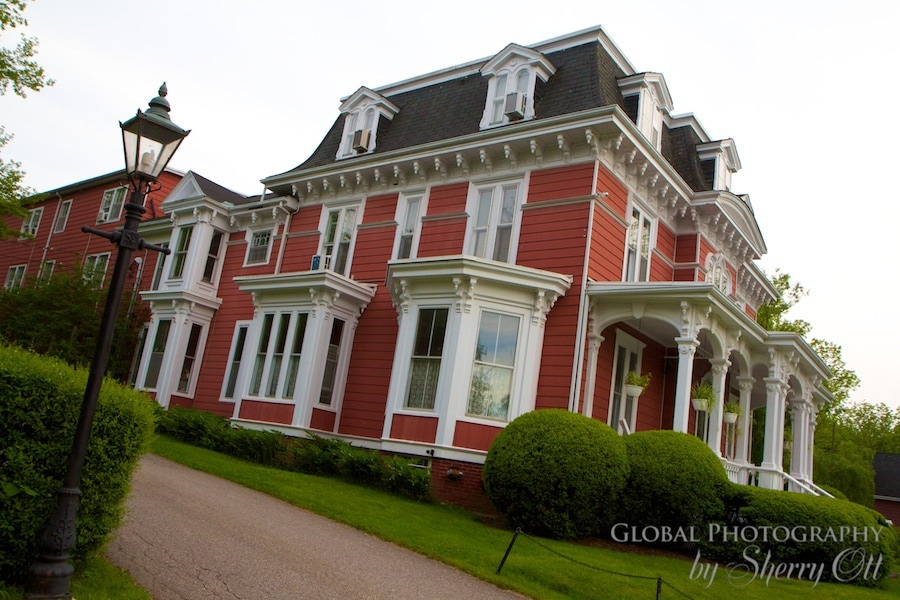 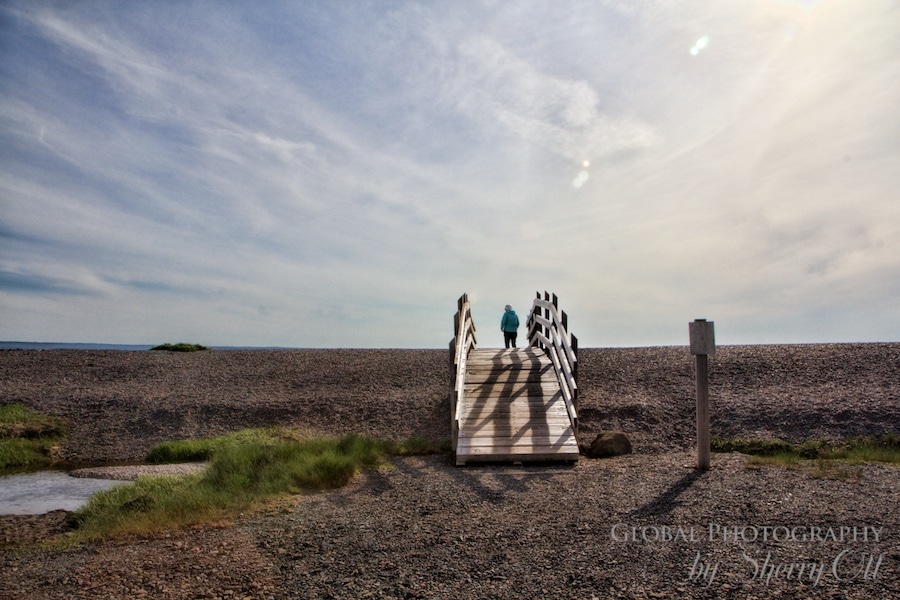 Scott’s Bay and the Bay of Fundy 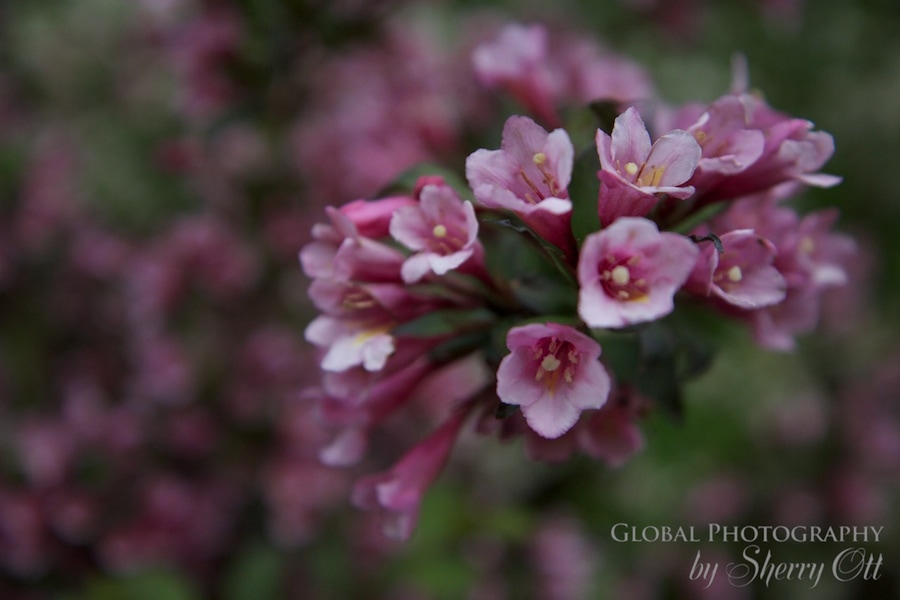 When I travel, I find the cheapest rental car rates at RentalCars.com . Check out their prices for a Nova Scotia road trip!

The Queen of all of Nova Scotiaâs driving routes – the Cabot Trail – is typically littered with superlatives such as best, greatest, and most scenic. It certainly deserves praise as it provides a whole different feel of Nova Scotia than the other routes. The road hugs the cliffs and winds around forests on the Northwest side and the Eastern side provides a rocky coast dotted with fishing villages and beaches. There are plenty of scenic lookouts along the Cabot Trail giving you many photo opportunities or just a place to sit and take in the magnificent views. We did half of the drive and then stayed overnight at the Keltic Lodge in a cabin on the rocky peninsula. After a dinner fit for royalty at the Purple Thistle, we enjoyed Celtic music and live entertainment at the lodge.

The next morning another storm had arrived in force and we couldnât even see the coastline! We continued our drive along the now stormy Cabot Trail giving us a whole new respect for Mother Natureâs force. We stopped at art galleries and the Gaelic College of Celtic Arts and Crafts to see bagpipe, fiddle, and other demonstrations â a great rainy day stop. Note that the demonstrations are only held in the morning once a day – so get there early! 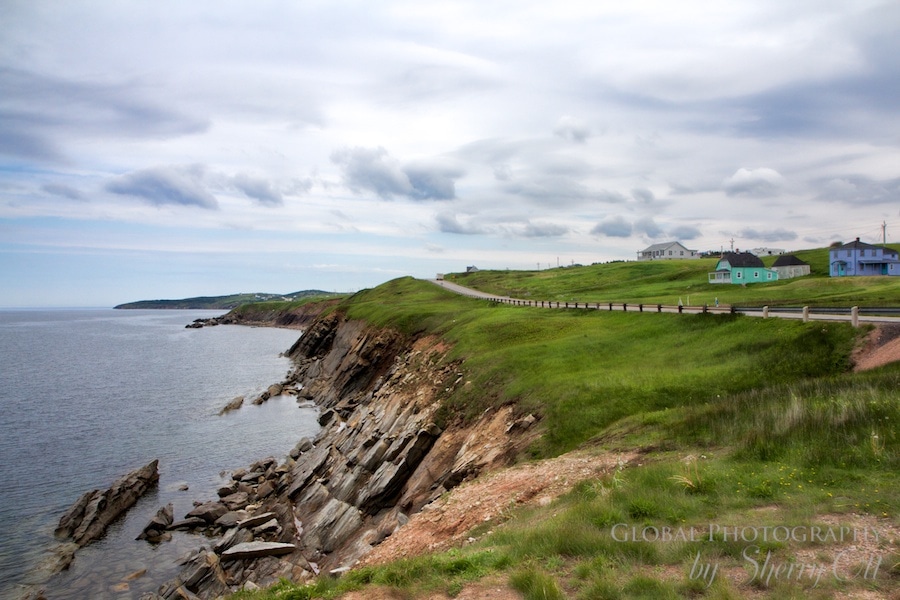 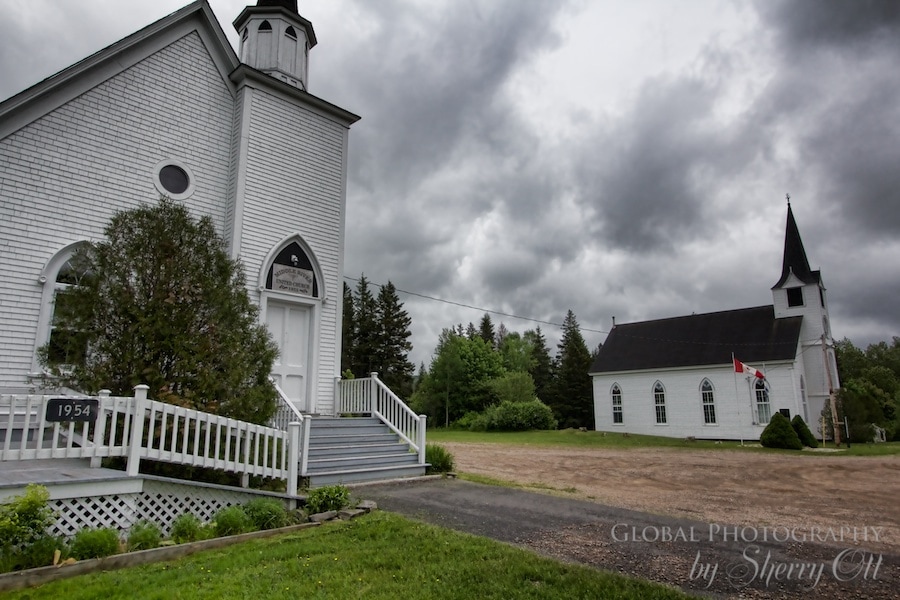 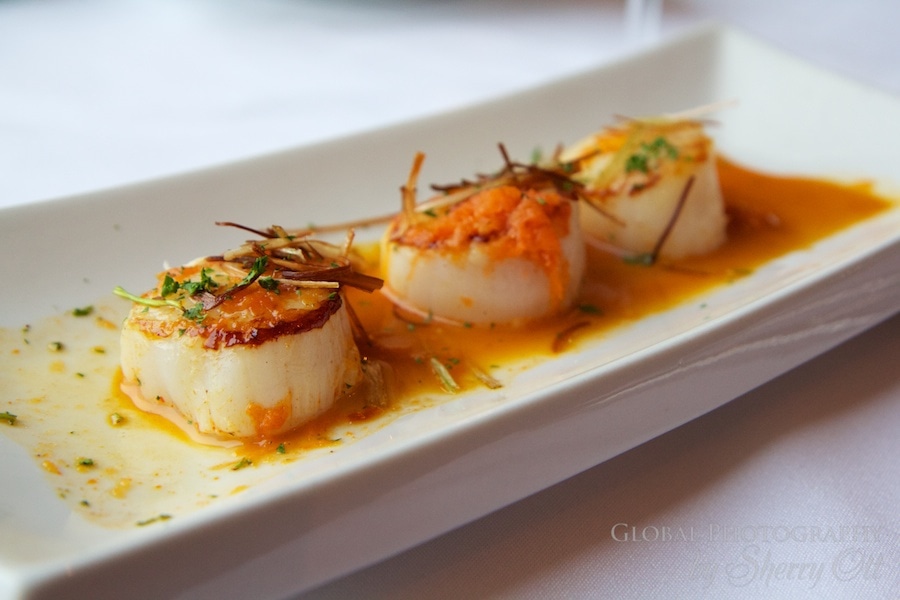 Scallops with ginger and carrots at the Purple Thistle 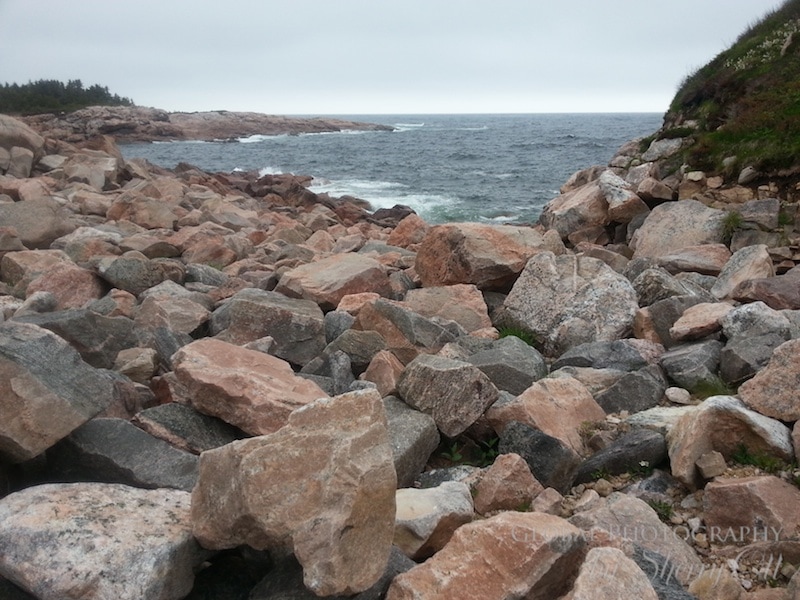 Rocky beaches along the Cabot Trail 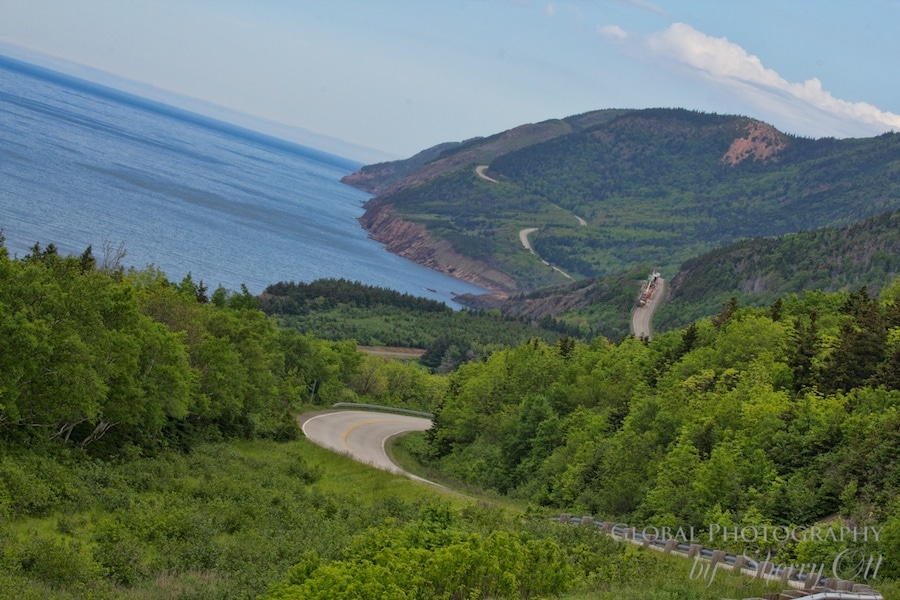 This drive along the Southeast coast of Nova Scotia was the Cinderella of the bunch. It gets very little coverage, but it had the most character. It starts with the loveable town of Guysborough where they brew their own brands of coffee and beer. This side of Nova Scotia isnât considered a popular tourist area â so youâll be treated to a good dose of small fishing village culture. However Guysborough was the tourism exception as it was home to the Des Barres Manor Inn â a beautifully designed Bed and Breakfast with a seafaring history.

The next day we drove from Guysborough along the whole Marine Drive back to Halifax. The weather was ever changing and the small towns were plentiful. Lighthouses dotted the horizon and lobster traps were stacked in small harbors. It was the perfect Sunday drive. 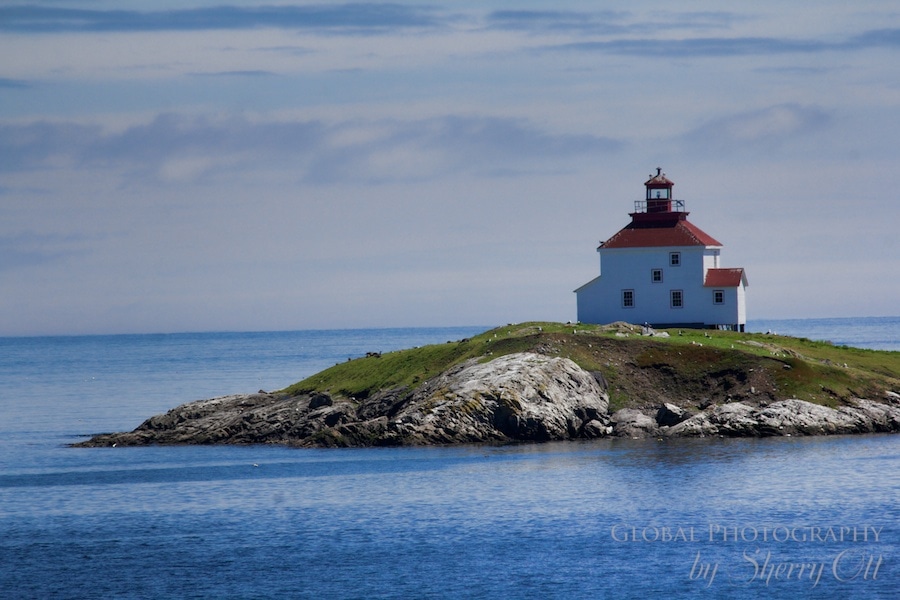 Lighthouse along the Marine Drive 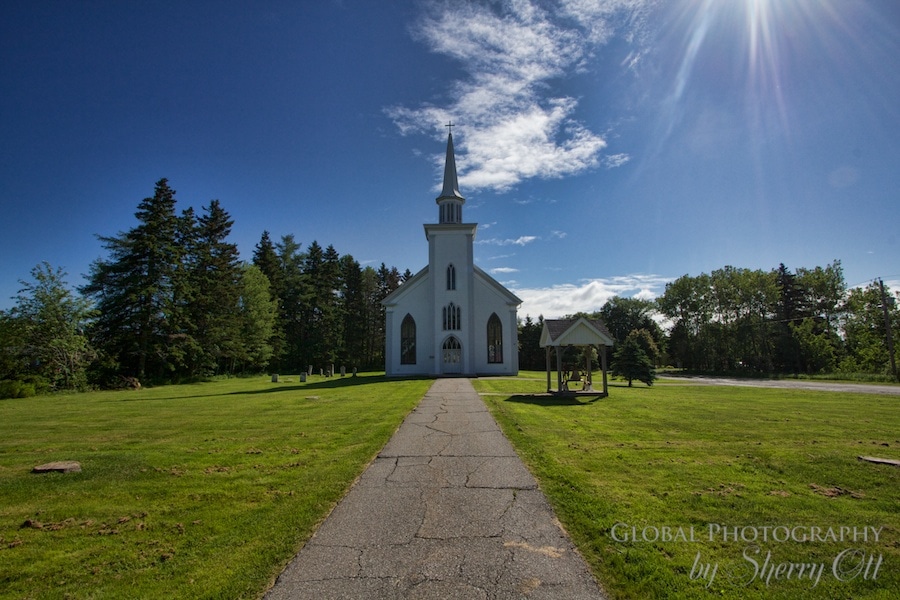 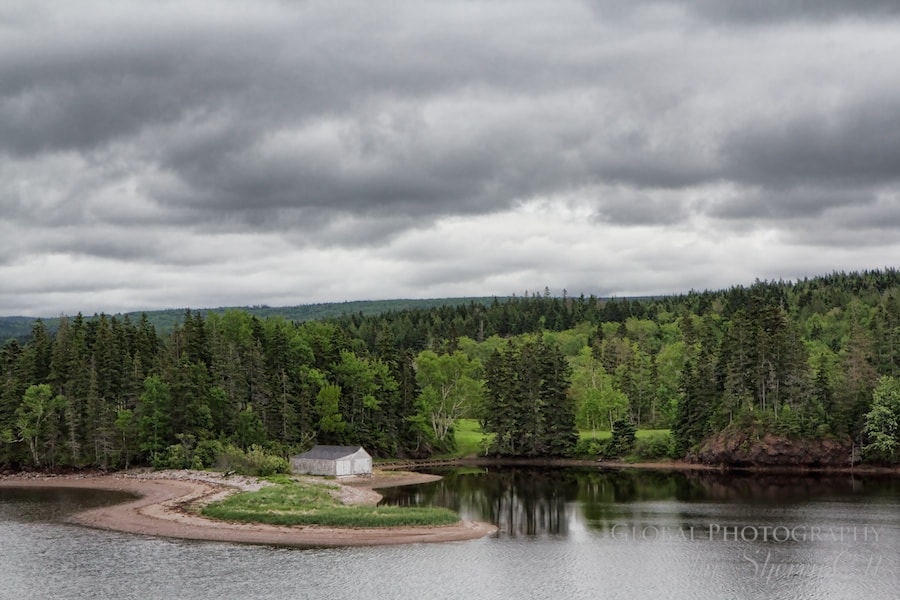 The landscapes along Marine Drive 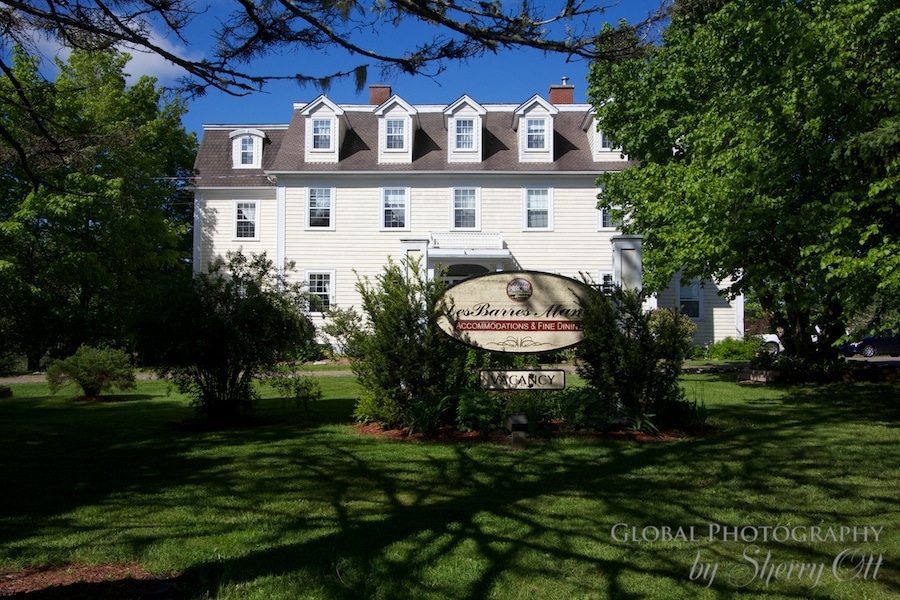 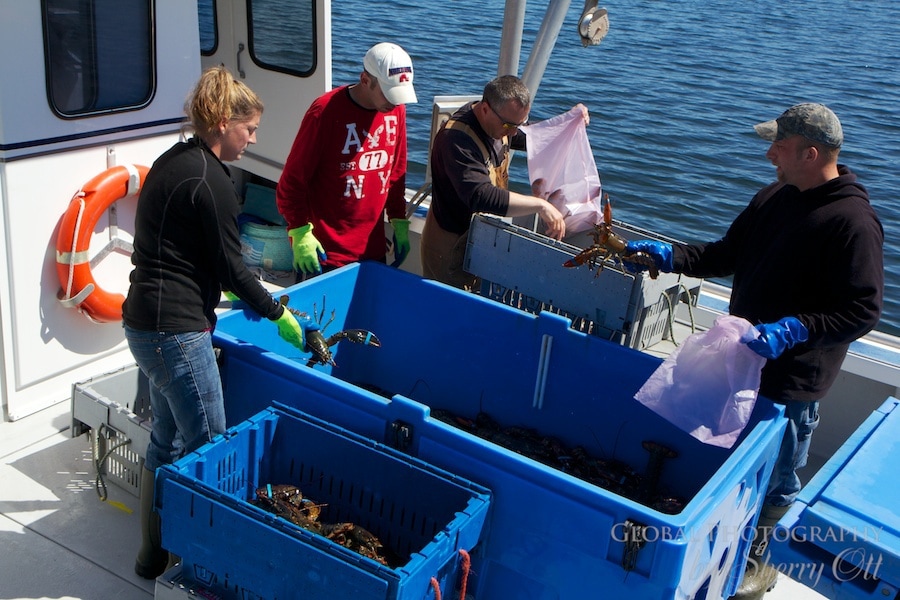 Lobster boats come into Guysborough harbor and you can purchase them fresh off the boat!

Itâs not a driving trail as the others, but it is the largest city in Nova Scotia â itâs the hub. Make sure that before or after your road trip you spend some time exploring this cityâs sites. We stayed at the historic Halliburton House â which is not simply a house but a trio of heritage townhouses full of character. It was only a few blocks from the waterfront and boardwalk full of eating options. We also enjoyed a luxurious meal at the historical Five Fisherman Restaurant which is said to be haunted â like most of Halifax. We learned about the history of the big Halifax explosion, ghosts, and why the restaurant used to be a funeral home. And of course when you are in Halifax donât miss the Citadel on top of the hill in Halifax. 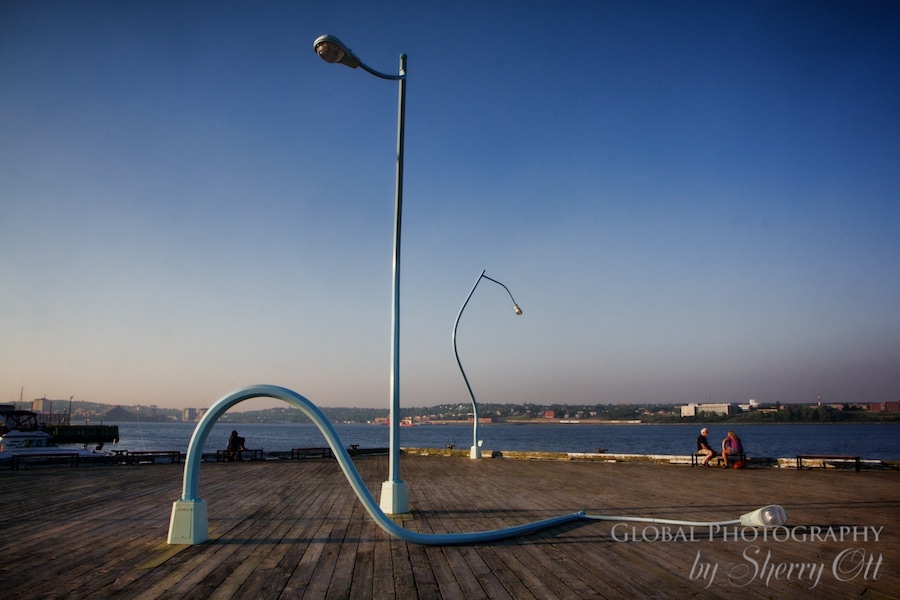 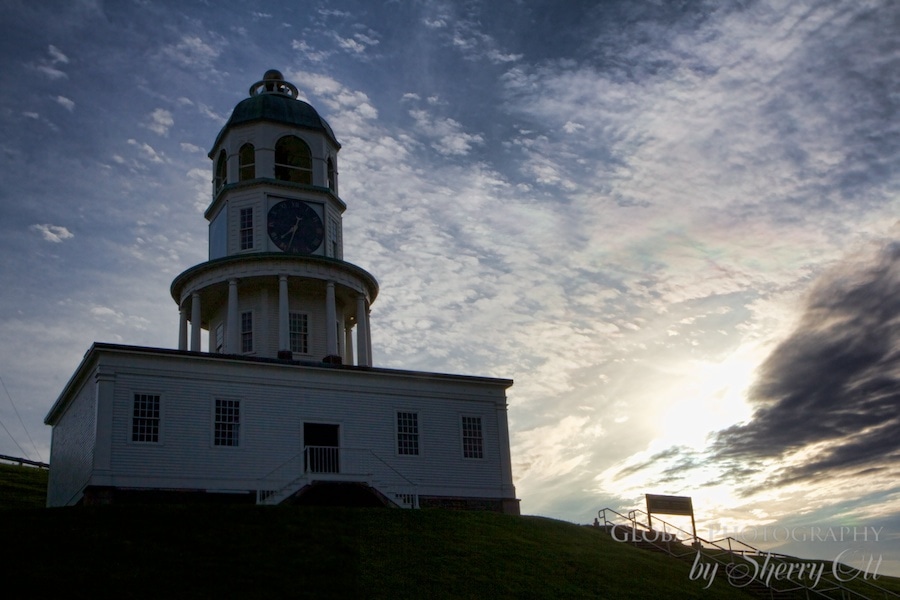 The Halifax clock-tower is a main site of the Citadel

Nova Scotia and its variety of scenic drives is perfect for a driving holiday or road trip.Â  It has so much variety beyond just the Cabot Trail. Hopefully you can get out and follow the signs along the other routes to get a complete view of this picturesque and culture filled part of Canada.

When I travel, I find the cheapest rental car rates at RentalCars.com . Check out their prices for a Nova Scotia road trip!

I was a guest of Visit Nova Scotia during this trip and they provided me assistance with lodging as well as suggesting driving routes.Â  However all of the opinions here are my own.