A day with Albert 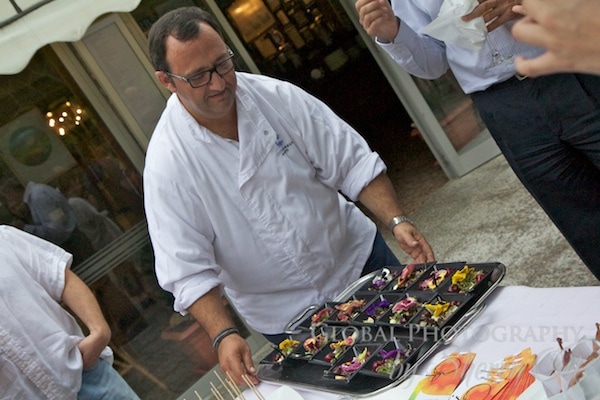 âYou have arrived at your destination.â I stopped the car and looked around and thought â now what? My GPS on my rental car led me to Orfes, a very small village in the district of Vilademuls. If Spain was a Russian stacking doll it would be Spain, Catalonia, Costa Brava, Vilademuls, Orfes as the tiny little doll stacked deep within. I looked at my piece of paper I had scribbled on and threw on my front seat â it read âLa Barretina â ask for Albertâ. This town looked completely deserted, no more than 90 people could live here but everything seemed to be shuttered up. I looked around wondering where I was supposed to go and to my surprise I was parked right in front of the sign that read La Barretina. I got out of the car, slammed the door and thought â donât question the GPS voice!

I walked up the stairs to the dining area and was surprised to see no one in the restaurant. A woman came around the corner and my presence startled her. I looked at my sheet of paper and said âAlbert?â with my tone raised at the end to emphasize that it was a question. She smiled and hurriedly said âSi, Siâ â and led me to a table by the window. 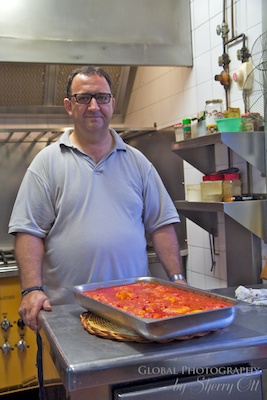 Albert in his kitchen cooking recipes passed down for generations

Soon a middle age man came out, he was a big guy but had kind eyes that welcomed me instantly. He introduced himself as Albert, the chef and owner. He said âEspanol?â I shook my head no, he then said âFrances?â I shook my head no again and said âOnly Englishâ in an apologetic tone. He sighed and you could see the English wheels start to turn in his brain as he tried to communicate with me about the restaurant and menu. I told him to bring me whatever he recommended â I trusted him.

He brought out a bottle of wine and I settled in with some olives and a glass of red enjoying the cool breeze blowing through the open shutters. But soon Albert came back with another woman who had a big smile on her face. To my surprise she started speaking in English to me, explaining she was the neighbor next door and she knew some English so Albert called her to come be the translator for us.

My insides smiled as I let out a chuckle and thought â only in a small town â this is great. Albert, the neighbor, and I continued to talk a bit as I learned more about the village and I in turn explained what I did and where I was staying this week at the nearby villa, Can Grau. Richard, who runs Charming Villas had urged me to come to La Barrentina in OrfesÂ  to try the hearty food in this region â he even went as far as setting up the reservation for me â yet considering I was the only one there I donât think it was necessary. 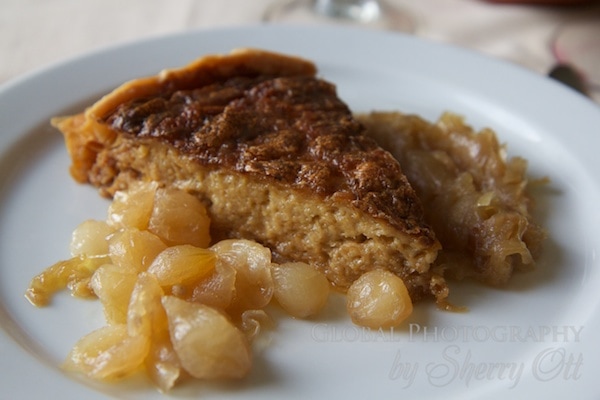 The most delicious ‘onion cake’ I’ve ever had

Albert first brought out an onion cake (as he called it) â yet it looked like a quiche to me. It was silky smooth in the middle (made from onion, egg, and cream) and had two different types of caramelized onions on the side. I took one bite and about fell off my chair. This was the creamiest, most flavorful onion dish I had ever tried. I found myself taking smaller and smaller bites so that I could somehow make it last longer.

Next a big beautiful duck breast was brought out covered in an orange sauce. I put my fork to it and the meat fell apart just like a house of cards â tender and cooked perfectly. The sauce had a hint of orange to it perfectly allowing you to enjoy the flavor of the duck. 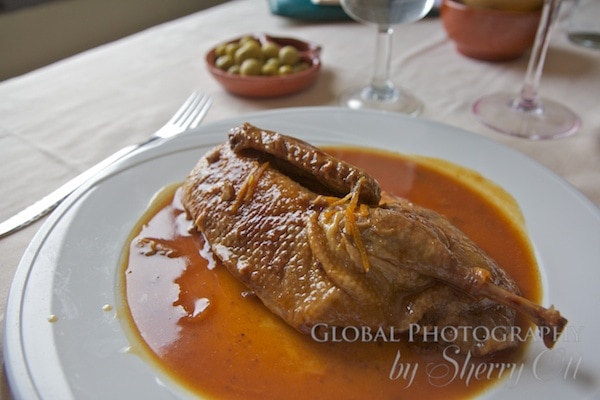 I asked Albert and his neighbor translator where he learned to cook. He explained that he was no Ferran Adria, the worldâs best chef who I had met the week prior in person. This admission sort of surprised me as it meant that Albert had read my website and somehow had the impression that I normally hang out with all star chefs and have high foodie standardsâ¦but lord knows that couldnât be further from the truth. He went on to tell me he learned the recipes from his mother and from some schooling.

Albert next brought out a poached apple âcake/pieâ which was practically floating like a raft in a little sea of cream. He served it up with my choice of sweet or dry wine. As I ate my dessert I looked at a little tourism brochure about Vilademuls. It read âWe want your visit to be that of a visitor who comes here to discover a world that exists beyond conventional tours and guidebooks.â Mission accomplished with Orfes and La Barrentina I thought to myself. 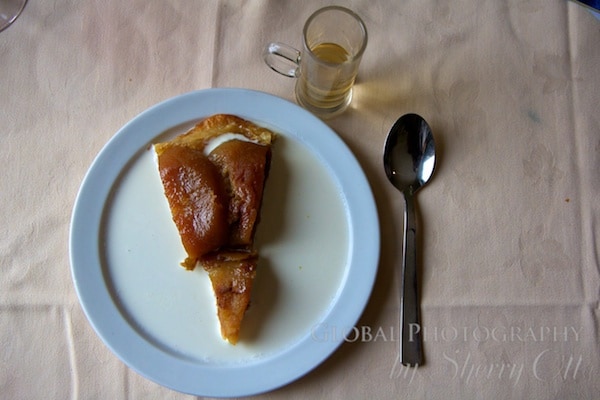 Albert and the neighbor came out again and the neighbor handed me another brochure about a culinary event this same evening in the neighboring town of Banyoles. She explained that Albert wanted to invite me to the tappas tasting. I struggled internally as I knew I had work to do that afternoon â but the idea of getting more local experiences was appealing to me. Albert offered to drive me there and back so that I didnât have to worry about how to get there. He suggested I stay at the restaurant for an hour and a half and then we could leave together.

I had my laptop and work things with me in the car, and soon I found myself in Albertâs home (the same building as the restaurant) using his wifi and sitting at his dining room table working away while he took a quick siesta. As I worked in his home smells of Jasmine wafted in through the open window and I thought to myself â I end up in the strangest situations, but thatâs the beauty of travel.

Albert made me some coffee after his siesta and I told him how much I loved the smell of his jasmine flowers. After coffee we took off for Banyoles with no translator – making us struggle through conversations in a combination of English, Spanish and French â but the beauty is that we were indeed able to communicate on our own. He not only took me on a small tour of the town of Banyoles where Olympic rowing teams come to train on the lake, but we also stopped at the cathedral and he pointed out where I should take photos and tried to explain more about Banyoles. 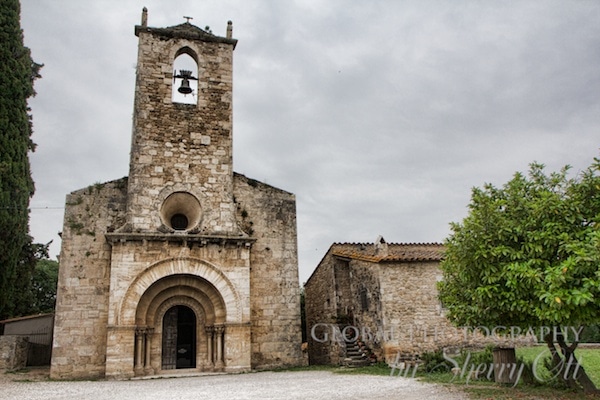 The church perched above the lake in Banyoles

We arrived at the restaurant where the tappas event was being held and I got a behind the scenes look at the chefs preparing their tappas and met other small restaurant owners/chefs in the region. At the event, I mingled and talked with various people from Girona and surrounding areas â but the English speakers were a bit limited â which meant that I spent a lot of time tappa tasting! The whole time Albert kept a close eye on me making sure I was well fed and tried everything. Three hours later we were back in the car driving back to Orfes as the sun went down. 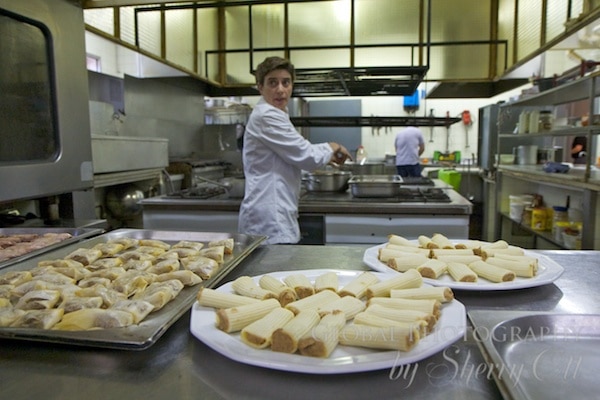 The chef’s prepare tappas for the event 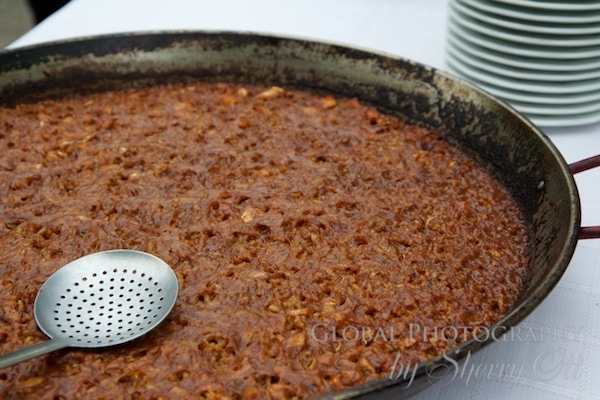 A big pan of paella perfectly cooked at the tappas event

Finally Albert picked me some Jasmine and gave it to me as I was putting my laptop back in my rental car and starting to look at the map on how to get back to my villa. He then insisted that he lead me back to my villa via a shortcut country road. A shortcut sounded perfect as it was getting late so I took off in my rental car following him on the dirt roads and he led me right to my driveway.

It was a surprising and unplanned day âdiscovering a world that exists beyond conventional tours and guidebooksâ â it was one of the best days of my travels in the region. What a day, what a meal, what a fabulous new friend â travel brings with it endless possibilities (and many Alberts) each day if you open yourself up to them.

11 Responses to "A day with Albert"